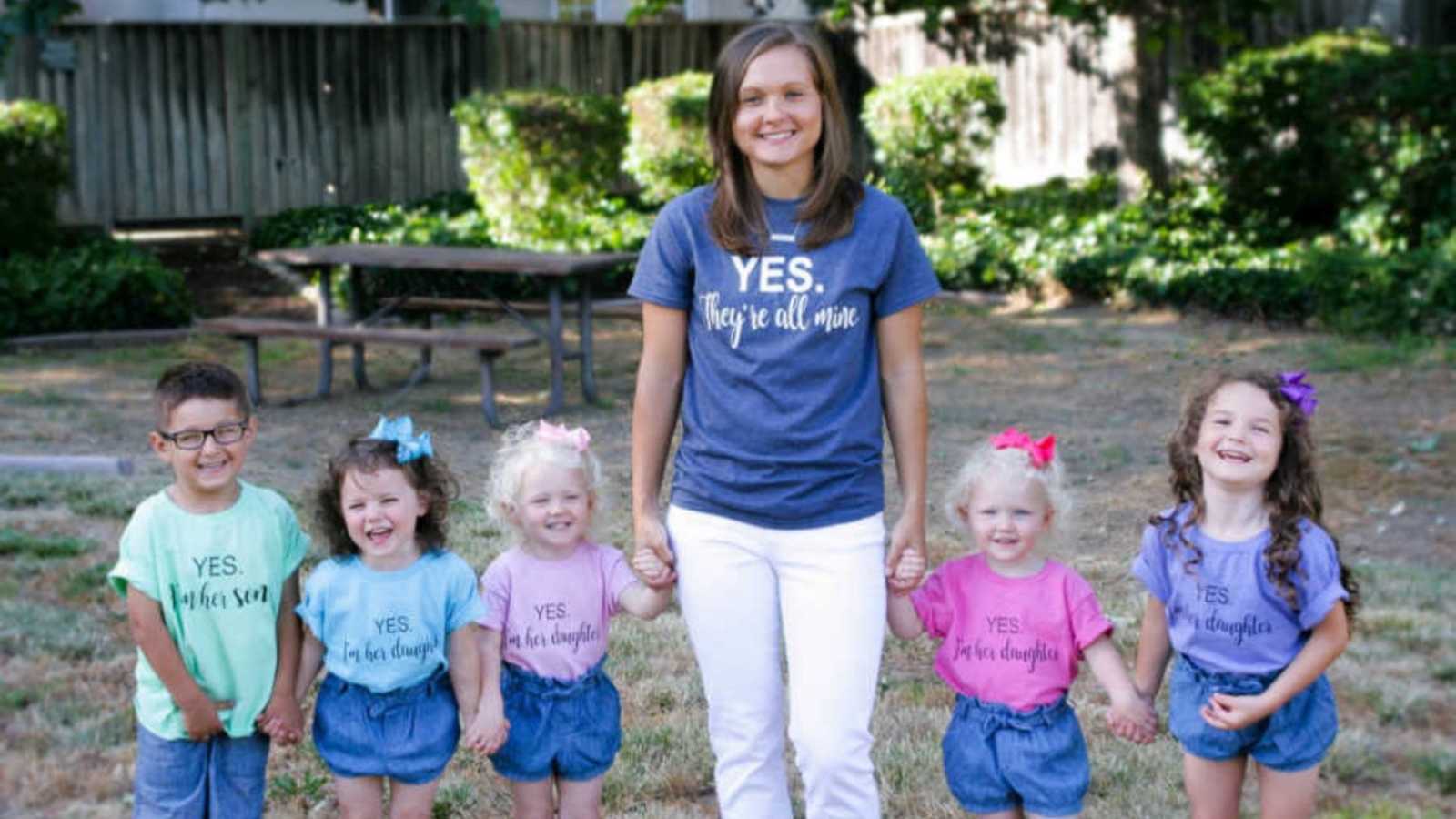 “This is the story of my half-brother Easton, who became an orphan at 2 years old, and was finally adopted after 458 days, by me – his sister.

On March 2nd, 2016, my father turned 50. He was 4-months-in to a death sentence diagnosis of stage 4 pancreatic cancer. The man who hung the moon in my eyes, my best friend, was dying. The day after his birthday, I received a phone call that his wife had passed away of an overdose. It came as a shock to all of us. So I boarded a plane that afternoon with my 7 month old twins and I flew alone with them from Washington to Michigan.

When I arrived, a lot of decisions needed to be made within our family. My father had a 2-year-old son, my little half-brother named Easton. Easton’s future needed to be figured out and it needed to be done quickly. We considered different options, talked about the pros and cons of different scenarios, but collectively as a family decided that I would raise him. My husband and I had four very young daughters and we always wanted a son. It was sort of like the perfect missing puzzle piece.

Things moved very quickly after my father decided to sign over custody to me. We met with a lawyer to discuss the process, signing multiple pieces of paper during the meeting. While sitting in that office, I tried so hard to imagine the pain and sacrifice my father must have felt in those moments. He knew he wasn’t going to live much longer. His eyes were starting to turn yellow, meaning his liver was starting to fail. But he sat there with his mind as sharp as ever, signing away his rights as a father. The heartbreak, yet fulfillment of that moment had my heart in a thousand pieces on the floor. I also thought about my daughters and how he was only able to be their grandpa for a few years. It all seemed so impossible and unfair that people I love so much, would never know each other.

We left the lawyer’s office on Friday night, March 11th, 2016, and had to wait until Monday for the judge to sign the documents, which she ended up doing. These documents gave me full legal guardianship of Easton. I told my dad the great news and he said to me, ‘Oh Molly, that makes me so happy. I love you so much.’ They would be his last words as he passed away the very next day. I had heard stories of people hanging on to say goodbye to family members or hanging on to watch their grandkids graduate. But this was the very first time I actually believed in it, knowing my father waited for Easton to be legally safe before letting go himself.

A few days later, Easton attended the second most monumental funeral of his life before he could even talk in full sentences. He became an orphan, unexpectedly, in only twelve days. Nobody saw this coming. I think we all kept going through the motions, unable to process what exactly was happening. A few days after the funeral, Easton flew home with us to Washington to start his new life.

He walked into a world of four sisters, meals around the table, and structure. The day he arrived, we had five children aged 3, 2, 2, 7 months, 7 months. My youngest are twins. We struggled, hard, for months to find some common ground. Once we finally did, it was like he had always been there. How did we ever live without him?

Soon after, we started a legal custody battle. Easton and I flew back to Michigan a few times for court dates that inevitably never carried out. The entire process took about a year, but eventually the judge in Michigan released him as a warden of the state and transferred the case over to Washington. The state of Washington received the paperwork and we set the adoption day for June 16, 2017.

The morning of the adoption was your stereotypical, rainy Pacific Northwest morning. None of us were dressed appropriately while wearing tank tops, shorts, and t-shirts. The rain fell onto our skin and I stood there imagining them as my father’s tears from Heaven. I imagined he was crying tears of happiness for Easton finally solidifying his family, yet crying tears of sadness for never being able to raise him the way he raised me.

I walked into that courthouse desperate for it to be a done deal, but staying guarded in my hopes. Isn’t it funny how the mind can play such tricks on you, even when the reality is so blatantly obvious? His parents were no longer here and he needed a family. Why would I whole heartedly fear the judge would deny that?

The hearing was quick and Easton was very shy for the first time in his life. It’s almost as if he subconsciously feared the same as I did. He laughed a few times at some silly noises. But for the most part he kept his head down on the table, almost fearful of looking up at the woman who held his fate in her hands.

But the judge was sweet, to the point, and so empathetic to the life Easton had already lived in such a short amount of time. We took pictures with her after the session was over and then walked out into a warm and inviting atmosphere.

The sun was starting to poke through the clouds and we could all feel the warmth it brought along with it. It was the perfect way to start our new, blessed life while leaving behind the pain and cold of the past.

On June 16, 2017, he walked into that courthouse as a 3-year-old orphan in the law’s eyes and walked out ten minutes later as our legal son. We fought to keep him, nursed him through trying illnesses, and kissed him goodnight for 458 days before the law recognized us as his parents. He’s now a brother to four sisters whom he is biologically the uncle of! If we want to get really technical, he’s also the brother-in-law of my husband, his now dad! I can only imagine the tricks they will play on other’s one day with that information.

Looking back on Easton’s life, there were a lot of foreshadowing moments for this ending. On the day he was born, my father and his wife called me to ask which name I preferred out of 3 or 4 they liked. I chose Easton and they agreed that name fit best. Easton also never called me Molly, he always called me Mama. At the time I thought it was because my kids called me Mama, so he just assumed that was my name. It’s almost as if he knew what would happen before any of us did.

I hope as the years go on, he will always appreciate his ‘first mommy and daddy’ in Heaven and that he will always know how much all four of his parents love him.”