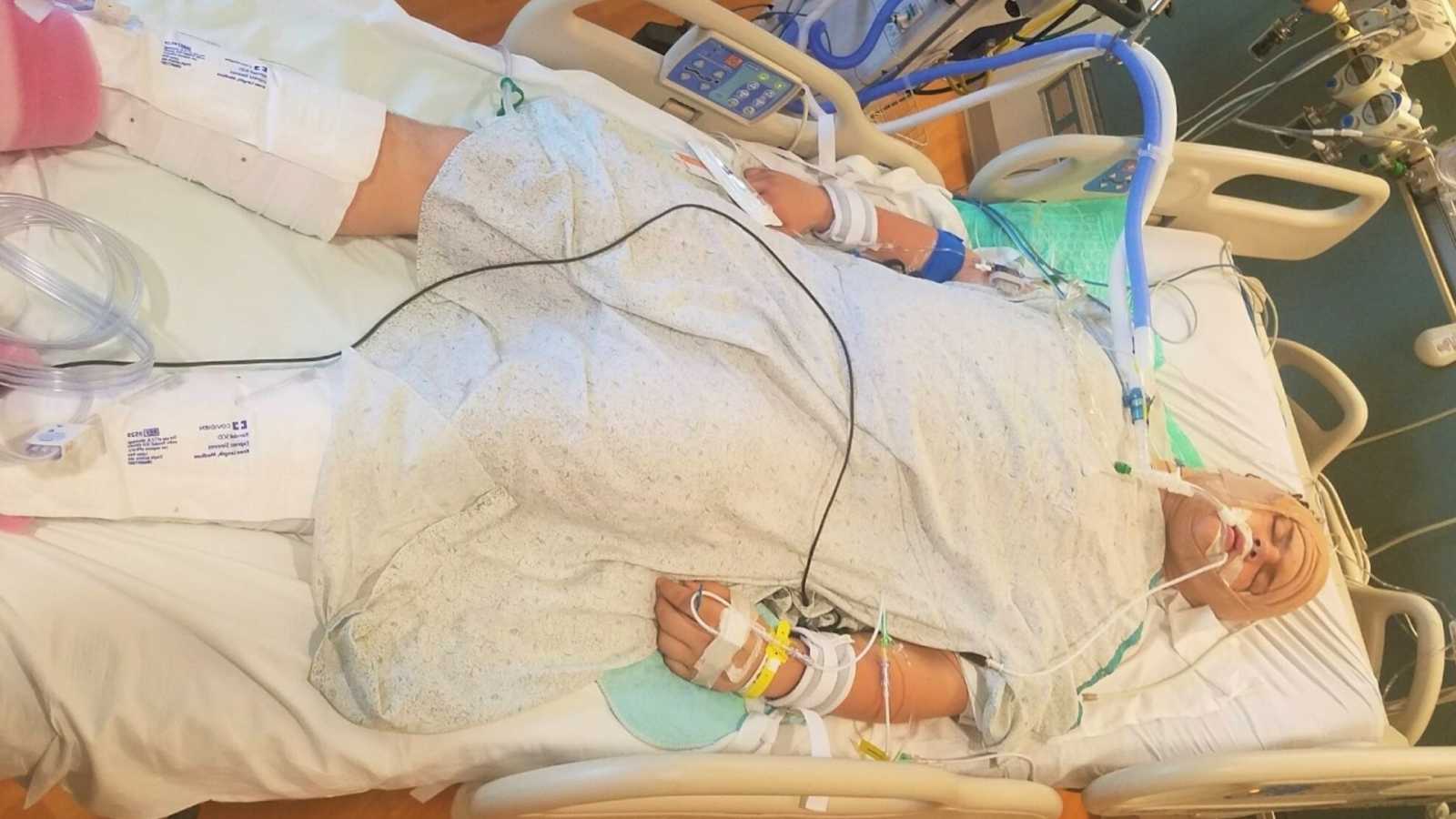 “I am a ‘medical mom.’ A mom used to very scary medical things. A mom who can do CPR on her little girl on the floor as she codes. A mom who holds it all together as her child lays on a cold hospital bed, getting pumped full of anti-epileptic drugs so she can stop seizing. A mom who is an optimist in the waiting room, assuring other families their babies are in wonderful hands. A waiting room where I sat just a month prior, and was told my dad did not pull through his surgery. I am a mom who holds it all together, even when the world is crashing. I am THAT mom.

I am that mom, until it’s my 14 year-old, strong boy. My boy who never let’s anything get him down. My boy who will help anyone at the drop of a dime. My boy who puts 200% into everything he does. This was the day I lost it… a day I couldn’t keep it together. It was a year ago today, a day I will NEVER forget.

The doctor came into the waiting room, and told me something had went terribly wrong. Bruce had suffered a Malignant Hyperthermia reaction. He informed me at exactly the 3 hour mark, as they were stitching up one ear to start the other, they noticed his heart rate soaring, temperature sky rocketing, and immediately took action. Thank God that team was trained and knew exactly what to do. There are so few cases, as it is so rare. But if not caught in time, it’s deadly!

They had a very bleak outcome. There are so few cases, and the fact of the matter is, no one honestly knows how an MH patient will recover. We had no idea what the damage would be. They saved our baby and told us it could be months until he could walk again. Football? Not this year. Maybe not the next. He had significant muscle breakdown during this event. We were told he essentially ran 7 marathons in seconds. His body needed time. Time to rest, to heal, to rebuild.

As the ICU room filled with MANY doctors, nurses, pharmacists, and anesthesiologists, they tried to formulate a plan. But the fact is, no one really knew enough about it. As I stood bedside, looking at my strong boy who was now lifeless, my world came crashing down. I reflected on how I was going to help my strong dude recover. How would I find the strength to get through this? I had just lost my dad in April. I knew he was with Bruce. I can’t explain the emotion surging through my body, but I felt a strange sense of calm at the same time.

That evening, after what seemed like an eternity, the hospital staff decided he was stable enough to wake up. Having already gone through a wake up with a child intubated, I knew this would be heartbreaking. I didn’t want to be in the room, but I knew I had to be. I knew he would be so scared. He had big plans of scoring Cracker Barrel that night. He would be so confused as to why he was restrained and had a tube down his throat. He wouldn’t be able to speak. He had his dad, sister Emily, and myself (along with many doctors) holding his hands. And then, he opened his eyes. The look in those eyes, burned into my soul. The confusion, the anger, I was ready for it. He fought the restraints, like I knew he would, and nearly snapped one.

Keep in mind, my dude is not your average 14 year old. He is one strong, powerful, beast of a kid. It took everything Jason and I had for him not to rip the bed rails off the bed. I was talking to him. We were talking to him. As he started to come to, he was extubated successfully. He said a few words, but he was so tired. He didn’t understand what had happened. But those words were music to our ears!

The next day, more doctors, more plans, more unknowns. Bruce was starting to recall what had happened. He was also hearing the chatter around him, saying ‘he wouldn’t/ he couldn’t.’

That was enough for my dude. He would show them exactly what he could do, and just how fast he would do it. Physical therapy came in the next afternoon. They brought a walker. Bruce was able to stand, with massive assistance to help him up. But that was it. He was spent after just seconds. I told him to rest, but he argued and wanted to walk. I thought to myself, ‘How are you going to walk when you can’t stand?’ But knowing my son, and his will, I buzzed the nurse and told her his plan.

The nurse called the physical therapist, and she came right up. Bruce stood up. It took a few moments, but he was able to do it on his own, with the assistance of just the walker. He took about 15 steps. And then 15 steps back. Again, heavy assist with the walker. And then he was spent again. This broke my heart. I knew how this would crush him. Athletics is what gets my boy through things. How was I going to tell him football was out?

Bruce had other plans. No one was going to tell him what he could or couldn’t do. By that evening, my boy was standing ON HIS OWN. And walking 100 feet ON HIS OWN! He was still very tired after, but never lost his humor or his will. By Saturday night, I had to go back to the house to relieve Jason with the girls. I’m not exactly sure what went down in those few hours, or the next morning. But to my surprise, my dudes walked through the door. No walker, no cane, NOTHING. They walked through the door, and my baby was home.

He played football last fall. He wasn’t 100%. I would say he started the season at 60% and ended it around 80%. He then found a new love for wrestling. This helped him so much with regaining strength. My baby didn’t let ANYTHING get him down. In typical Bruce fashion, he went big! And I am so fortunate we didn’t loose him that dreaded day in 2019.

I knew my dad was with him, but it wasn’t until months later I learned just how close. Bruce shared with us that he saw the light. And he was overcome with the greatest sense of love. It was terribly hard to resist going into the light, but my dad put his hand on his shoulder. He found them standing on a football field, just my dad, him, and the light. My dad told him he needed to go back, he had many great things to do, and it was not his time to leave yet. They chatted about some other things too, but Bruce is not ready to talk about that. Thank you Dad, for sending him back to us. And I will forever be grateful to the hospital staff, as their quick actions saved my baby’s life!

Bruce had an AMAZING football season, as well as qualified 1st place in our district for wresting. He continues to amaze me every single day. This kid is going to do amazing things!”

This story was submitted to Love What Matters by Nicole Hartman. Do you have a similar inspiring journey? We’d love to hear your story. Submit your story here, and subscribe to our best stories in our free newsletter here.

‘You’re paralyzed from the waist down.’ I was thrown 50 feet and landed on my back. I was told I’d never walk again.’: Woman makes amazing recovery after car accident, ‘My journey isn’t over’

‘Am I ever going to walk again? Will I survive this?’ I couldn’t see it coming or avoid it. I never saw the man who did it. I just felt the shattering vibration in my leg and collapsed.’ 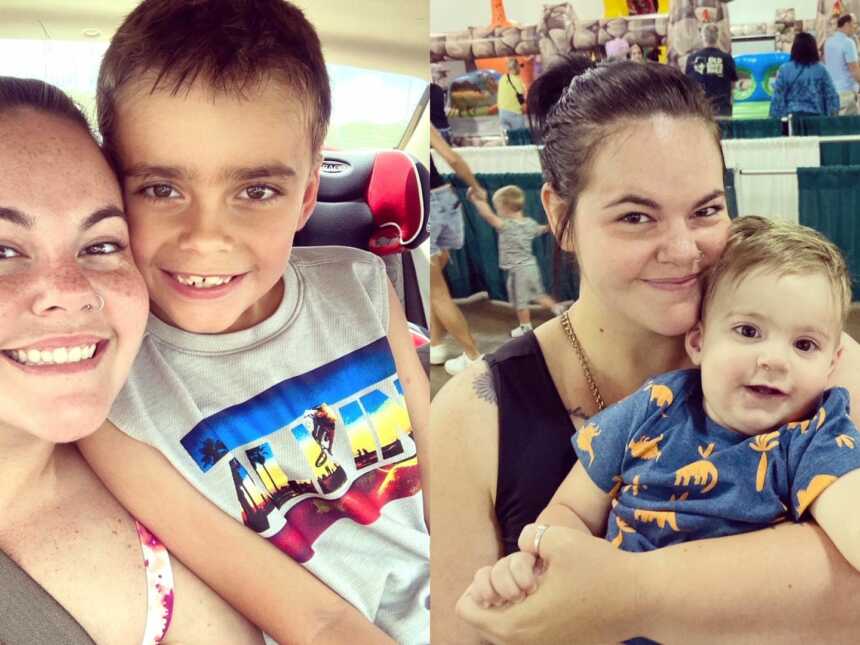 ‘It was immediate removal. I didn’t know where they were or who they were with for almost a month.’: Falsely accused mom shares reunification journey with children placed in foster care

“I couldn’t wrap my head around it. I’ve done more hair follicle tests and observed urine tests than I can count. However, even after providing all of the negative drug screens, they were still adamant I had a substance abuse problem.”