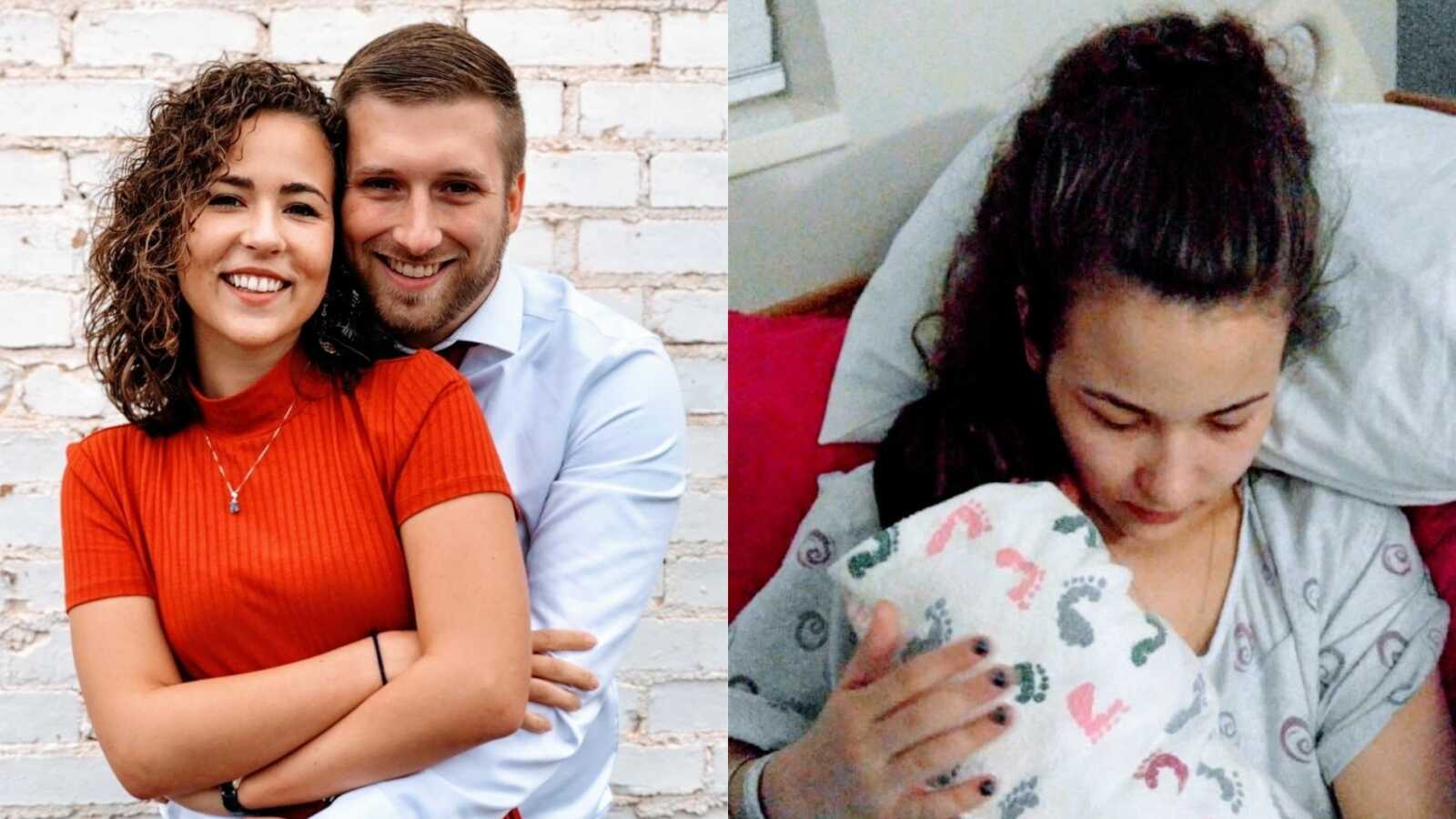 ‘How could I have been so selfish?’ At 18, there was someone growing inside of me.’: Teen birth mom shares emotional adoption plan, ‘I knew they’d never go a day without being loved’

“I became pregnant at the age of 18. It was with someone who I had only been dating for a couple months and they already had the stress of having a two-year-old they couldn’t really support. I had no idea what to do. I called my mom and immediately dropped out of my first semester of college to go home. I was still in a relationship with the father and he was not okay with adoption. After a couple weeks, I ended up moving back in with him. For the next couple months I was a mess. I worked 2 jobs, would sleep in until 1 p.m., I couldn’t keep anything down so I didn’t bother to eat. It wasn’t until the father wouldn’t come home due to the need for drugs that I ended up going home again, this time for good and I knew it.

I broke off all communication with the father and started to create an adoption plan with my parents. That’s when it all hit me. There was someone growing inside of me. How could I have done this? To screw up my life is one thing, but to mess with another? How could I have been so selfish? I was on a search to find a family for this little someone inside of me. The rush to the bathroom every morning, the little kicks and flips in my stomach, the constant embarrassment – it was a lot to deal with at such a young age in such a small town. I would feel a flutter and just wish something would go wrong and I would miscarriage. The guilt was eating at me.

And then I found them. I had no idea, but my whole religious ward had fasted for me that week to find a family, and low and behold a picture came up. A couple standing on rusty railroad tracks and 2 tiny pairs of shoes underneath a sign reading: waiting for you. My mom and I just started crying. We didn’t say anything, but we just knew this was going to be one of the best decisions I’ve ever made. The pregnancy became bearable after this; I didn’t feel so stressed or guilty. We would send pictures to them, ultrasounds, they sent out announcements, time was ticking by, and I was excited. She came into town a month before the baby came and we all had a plan.

It was finally April and I went in for a routine ultrasound and things changed a lot after. My due date of April 17th was then bumped to April 11th, and then April 5th. I suddenly became scared. Not to have the baby, but of the time I just lost. It dawned on me: these were the last moments with this little someone. I was supposed to have 2 more weeks. I suddenly hated myself for all the times I tried to shove the idea of being pregnant out of my mind. I didn’t want this to end, but it didn’t matter because either way I had to be at the hospital the next morning.

For the next 36 hours, I was in labor waiting for baby to come. With both families waiting, after much time and effort, that little someone came into the world and not once were they put down. For the next 2 days, they were introduced and loved by all, stealing everyone’s heart one by one. I knew they would never go a day without being loved. It was those 3 days that will forever be the most important days to me.

It was a Saturday at 10 a.m.; I got dressed and was left alone with my little someone. After spending several days and nights with this beautiful baby, it was time to say goodbye. I held them in my arms and we just looked at each other. I took this moment to memorize every detail of their face; every crease under their eyes, every black strand of hair, even a mark on their cheek from where they scratched themselves. I looked into their eyes and those deep pools of dark-cinnamon swirls seized the depth and heaviness of a thousand untold stories I would never get to hear. I don’t know how long we stayed like that. For a split moment, for my sake, I think God stopped time.

I set them down in the basket, looked at them and told myself I was ready. With my shaking hands, I opened the door and wheeled them down the hall, my parents following closely behind. Never had time gone slower and yet so fast. I couldn’t breathe. Every nurse looked at us with sadness in their eyes, all knowing what was about to happen. Each step on the blue-patterned carpet was heavy, the white walls and fluorescent lights are details I will never forget. I reached the room their parents had been staying in and turned to my mom. I grabbed the blanket I had made for them along with several letters I had written, a bunny I had bought and a book, all folded in blue ribbon and a white, ridged string connected to a ‘Happy Birthday’ balloon. Tucked tightly between the strands was a rose taken from the bouquet my Dad had bought for me.

I turned to their basket and picked them up. They were so light, and my heart was so heavy. I put them in her arms knowing there was no one else I would rather them call Mom than her. Knowing in this moment I had never loved anyone more, while also knowing this was the last time I would ever see them again, I leaned down and kissed them on the forehead. My lips pressed against their soft, warm skin, my eyes tightly shut, putting all my effort into this last kiss. Looking at them one last time, I wrapped my arms around their Mother while she whispered ‘thank you‘ into my ear. I turned around and walked out of that newly blessed room coming to the realization I was simply just a vessel used to bring this child to his eternal family. The door made a hard click behind me. I walked a couple steps and I fell into my Dad’s arms, sobbing uncontrollably. Wrapped in the arms of both my parents, and with tears running down our faces, they told me how proud they were. I knew the decision I had made was right, but never have I felt, nor will I ever again, feel both the joy of Heaven and the pain of Hell, all in one moment.

It’s now almost 5 years later, and while I’ve missed that little someone, I have never regretted my decision. This doesn’t mean I haven’t had hard days. There are still certain songs I can’t listen to because they remind me of them, there have been nights I have hidden from roommates and cried in a bathroom, but I have always known I made the right decision for me and my child. I now help women who are experiencing the same thing understand and get through a difficult but beautiful process.”

This story was submitted to Love What Matters by Kaytlin Jensen of Maricopa, AZ. You can follow her journey on Instagram and Facebook. Submit your own story here, and be sure to subscribe to our free email newsletter for our best stories, and YouTube for our best videos.

‘At 41 years old, I felt pregnant. ‘But how could I be? I have an IUD.’: Woman births rainbow baby after multiple miscarriages, becomes birth mom in adoption to give back

‘Her birth mom is pregnant again.’ This news brought me to my knees. Could I handle two babies, only 11 months apart?’: Single foster mom adopts sisters, ‘It’s been beautiful and redemptive’

‘I’m pregnant. I know you’re the best thing for him. He’ll thank me for this one day.’: Birth mom unexpectedly shows up to court, surprises couple by ensuring they’ll adopt son, ‘He is the most loved little boy in the entire world’