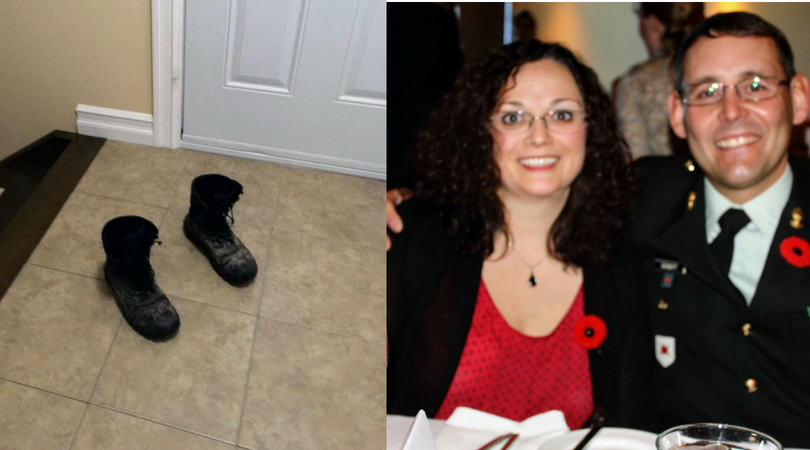 “Four years ago today, I got up ridiculously early in the morning to say goodbye to my husband as he was leaving for a six-week training exercise.

‘What are you doing up? You didn’t have to get up.’

‘I just wanted to say goodbye.’

I gave him a hug and a kiss as he walked out the door.

‘I love you. Have a good exercise. I’ll see you in six weeks.’

I locked the door and as I turned, I tripped over an extra pair of combat boots he had discarded on the floor. Muttering under my breath, I picked them up and threw them in the closet on my way back to bed. Just as I had a thousand times before over the previous twenty-one years.

Later that morning, I followed the trail he’d left behind him.

An unfinished bowl of congealed oatmeal and blueberries on the dining room table beside his laptop that he forgot (or never bothered) to turn off. Half a cup of cold coffee on the counter by the dishwasher. Pajama pants in a heap at the top of the stairs by the living room (where one naturally would leave their pjs). A plastic army clipboard on the desk in the entryway.

As I made my way around the house tidying up after him, I wondered if he would ever learn how to clean up after himself. He was a make-work project in so many ways. Never deliberately. He was just forgetful, and scattered, and was so clumsy. He was forever losing or spilling things.

I had absolutely no idea that was the last morning I would ever clean up after him.

Or that he would never come home again.

When someone we love dies, they leave a vast void in their stead. Where a life once existed, now only memories.

Those memories suddenly become our most precious possessions. We gather them close to our hearts and replay them over and over on a loop; like a movie reel of a life. We cling to them desperately, hoard them even, for they are all we have left of the person we lost.

We can’t help but think of all the memories that will never be made; all the should-have-beens and momentous occasions they will miss— graduations, weddings, grandchildren born.

We think of all the unfulfilled hopes and dreams; the aspirations and plans for the future that are now all gone.

But gone isn’t just those big momentous events or the things they’ll never do.

Gone is so very much more than that.

Gone is a thousand tiny seemingly insignificant, ordinary things that we took for granted every single day. Things we may have even once complained about.

Gone is no more dirty dishes: no half-eaten bowl of oatmeal, no cold cup of coffee

Gone is no more pajamas abandoned in a pile in the most random spot.

Gone is no more PT gear or uniforms to wash.

Gone is no combat boots in front of the door to trip over.

As I was leaving for my run this morning, I paused in the entryway by the door. I stopped and I listened to an echo of a memory,

‘Seriously Daniel, can’t you just once put your damn boots in the closet?’

I looked down at the floor.

There was nothing there.

Sometimes you don’t fully comprehend the significance of something so simple in your life until it is no longer there.

All too often we don’t appreciate how fortunate we are until what we have is gone.

Not that we are purposely ungrateful. We just get so caught up in the chaos of life, so busy hurrying from one day to the next, we forget to stop and be grateful for all that we have.

And sometimes in all of the stress, all of the rushing to and fro, we don’t even see how much we have to be grateful for.

We don’t realize just how meaningful a pair of combat boots by the door really are.

We very rarely stop to think about what gone actually is because, well, we never really think it will happen to us.

Gone isn’t just some throwaway term or trite cliché used to define the absence of someone. Gone is real, and it’s enduring.

And gone, it does happen to us. Randomly; unexpectedly. On a sunny May afternoon.

Four years ago today I didn’t know the true meaning of gone.

I didn’t know just how hard it would be to start over at 43.

I didn’t know about the challenges of only parenting three teenagers.

I didn’t know about the long lonely years ahead of me.

And I certainly didn’t know how profoundly sad an empty entryway can be.

I locked the door behind me and as I turned, I caught one brief, final glance of the empty entryway through the window. I brushed away a tear. Just as I have a thousand times before over the last four years

As I ran down my street, I couldn’t help but wonder how many wives were muttering under their breath this morning as they tripped over a pair of combat boots.

Or how many husbands were grumbling because their wife bought yet another pair of shoes.

It’s so easy to be annoyed by those things; to roll our eyes and shake our heads.

The inconvenience, the cost, the clutter. And why do your combat boots need to be there? Why can’t you put them away? And really who needs that many pairs of shoes? I don’t even want to know how much they cost.

It is only after they are gone that we realize their true value.

In one heartbreaking instant.

This morning stop for a moment and look around you. Take it all in— the combat boots, the laundry, the dirty dishes, the blackberry that never stops buzzing, the shoe collection.

Stop and think about what it all represents.

Now, while you still can, before it becomes but a memory.

And as you do, know just how fortunate you are to have it. Every annoying, ordinary, lovely bit of it.

Because someday you might just find yourself like I was this morning, standing in an empty entryway with nothing but your memories, longing for the musty smell of mud and boot polish on a pair of combat boots that will never be worn again.

Be grateful for those combat boots by your door.

You truly will miss them when they are gone.

More than you could possibly ever imagine.”

This story was submitted to Love What Matters by Monica Bobbitt of A Goat Rodeo. The article originally appeared here. Submit your story here, and be sure to subscribe to our best love stories here.