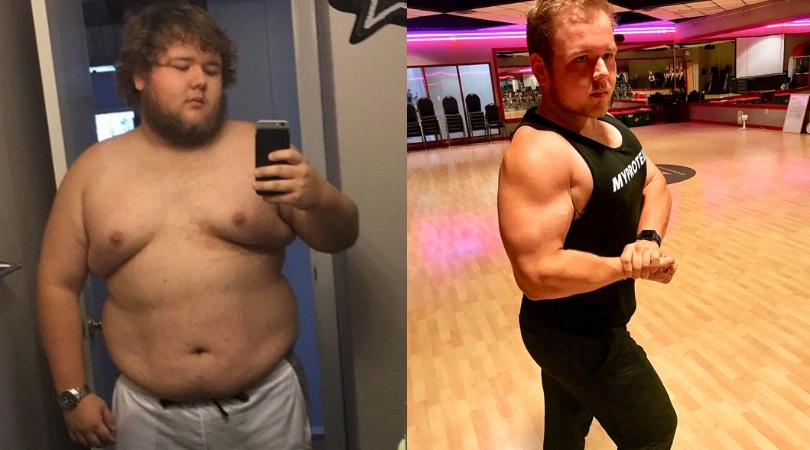 “So there I was, staring at the scale in disbelief. The needle stopped at 320 pounds. I always told myself I would never get above 300 pounds. I knew I wasn’t skinny by any means, but was I really 300 pounds?! This was the exact moment I decided I HAD to change something, anything, to save myself from this life.

Yes, I had always been one of the bigger boys, but I was never ‘fat.’ I was a football player. A wrestler. A soccer player. I was big, but athletic. So how exactly did I get here? It all started one day playing kickball in gym, I landed on my knee wrong and tore a ligament. This led to a series of injuries in both knees that ultimately took me out of sports. This is when the weight really started to pile on rather quickly.

At first it was 20 pounds and didn’t seem like an issue to me. I was sure I could correct it, little did I know I was developing a terrible relationship with food. In a little under 2 years, it led to a weight gain of about 100 pounds. Without sports I struggled to be social and make new friends; so I comforted myself with food. Obviously this led to a vicious cycle of more weight being packed on, and me becoming more and more antisocial, which ultimately led to more eating. I was unhappy with my body, my social life, and my education. The only thing I really looked forward to was my next meal or what I chose to snack on later that night. This terrible cycle lasted until January of 2017.

For Christmas 2016 I ordered myself some new clothes online. I purchased the same XXL size shirts and size 44 pants I always have, yet when I got them, they didn’t fit. They were all too small – and this is when I decided to get on the scale. A decision that would forever change my lifestyle, as well as my direction in life. As soon as I saw just how heavy I had gotten, I knew I was going to change and I was determined to lose weight. I had tried before but only given it a few days and reverted back to my old ways. This time was different for sure, and I knew that from the start.

So now for the question everyone wants the answer to: how did I do it? What was my secret? What do I know that no one else does? Well the answer is simple; I achieved this with nothing but hard work, commitment, and determination. Most people don’t like this answer because everyone wants a secret; a quick fix. The truth is – that doesn’t exist. I started with a simple caloric deficit, simply meaning I consumed less calories than I burned. I did not go to the gym every day with some crazy exercise routine. I did not have some insane diet where I completely cut foods out of my life. The only thing I did was cut out soda and track my calories to ensure I knew how much I was eating. The only exercise I got was playing tennis twice a week. I lost over 40 pounds this way, and eventually I learned more about different training routines and got into a gym.

Luckily, I fell in love with fitness and weight training. This prompted me to learn more about nutrition and the foods I was putting into my body. I still did not go on an insanely strict diet, I followed the IIFYM (If It Fits Your Macros) philosophy, and I still do. This was the easiest for me to stick to because I did not have to deprive myself of any foods, which eliminated a lot of cravings I feared would lead to me breaking my diet and binge eating. Over the course of 12 months, I was down to 198 pounds; over 120 pounds lost!

Now this is where most weight loss stories end, however this is where mine is just beginning. I take pride in my story because I believe it was different than anyone else’s. After those 12 months of losing weight I began to switch to a slight caloric surplus. I was now determined to gain back strength and muscle I had lost during the extended period of being in a deficit. This was a battle in itself because I feared getting ‘fat’ again. I feared I would end up splurging and waste all my hard work. However I am proud to say I did it, again! I slowly worked my way back up to 218 pounds; adding on roughly 20 pounds of mostly muscle. Now I am back on a cutting cycle and I have the ultimate goal of 180 pounds while retaining as much muscle as possible.

I am incredibly proud of what I have accomplished, but I am more so thankful. Because of my journey, I fell in love with fitness and learned more than I thought possible. I want to use my knowledge and story to inspire and help others. I have become a certified personal trainer and I am working to start an online training business to be able to reach people everywhere. I know how lost and hopeless it feels when you are overweight and unhealthy. I felt like there was no point in even trying because it was not possible. I know the struggles, and I want my story to be an example and inspiration for others. As cliché as it sounds, if I can do it, so can you. Everyone’s story starts somewhere.”

This story was submitted to Love What Matters by Jamie Hathcock, 20, of Albemarle, North Carolina. Do you have an inspiring weight loss story? We’d love to hear your journey. Submit your story here, and subscribe to our best stories in our free newsletter here.