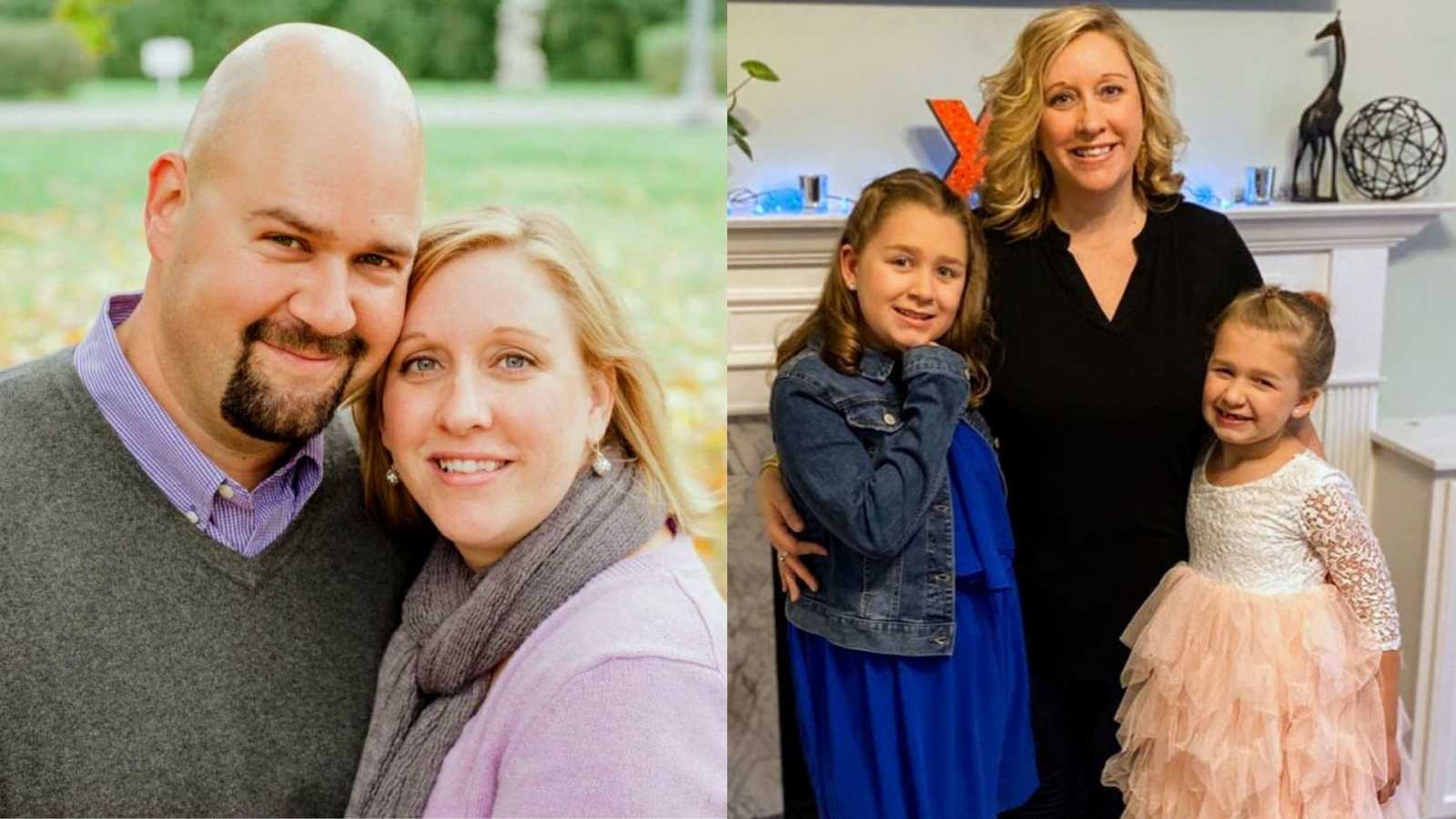 “JD worked with my brother at a local golf course, but we only ever spent time together as friends, in a group. That is, until we reconnected in 2006 via Match.com. JD sent me a ‘wink,’ we started chatting and he asked me out on a date. Well, actually my entire family joined us on our first date; because when JD said he’d love to see everyone, I took that comment literally. Poor guy.

It wasn’t until we’d been dating for almost a month he told me the truth. He said something like, ‘I was just being nice, I really only wanted to see you.’ Of course, I laughed, apologized and then, my heart melted. Dating JD was easy. It was fun, exciting, and all those feely things dating should be. We both knew pretty quickly this was ‘it.’ We were falling in love, while becoming best friends and having an absolute blast with one another.

On the one-year anniversary of our first date, JD and I booked a Bed and Breakfast for the weekend. After dinner, I wanted to give him his anniversary gift; a golf club. I told JD I needed him to close his eyes, since I hadn’t wrapped his gift. His response, ‘Oh, good, because I didn’t get a chance to wrap yours either.’ JD closed his eyes, I pulled the club out from under the bed and presented him with his gift. It was a chipping wedge he’d been wanting, so he was happy.

He then said, ‘Okay, my turn… close your eyes,’ so I did. When he told me to open them, he was on one knee holding a diamond. My grandmother’s diamond. He told me how much he loved me and he wanted to spend the rest of his life with me. I can’t remember everything else he said, because I was so incredibly surprised. I just remember crying happy tears and saying YES over and over.

Fast forward to May 2008. JD and I were married in a field, surrounded by family, friends, tacos and a piñata. Our wedding was simple, lovely and so much fun. Neither of us were nervous that day; just genuinely happy and borderline giddy.

Together, we have two beautiful daughters: Audrey was born in 2010 and Emmie in 2012. Everything was perfect. Well, we lived paycheck to paycheck, tackled projects in our little fixer upper as funds allowed, we kissed boo-boos and dealt with everyday stressors, but for us…life felt perfect.

That all changed on September 29, 2014. On this day, a Monday, JD died suddenly. His death was the result of a pulmonary embolism. My world came crashing down around me to a screeching halt, all at once.

The Saturday before JD died, we attended a local wine festival with a few other couples. Later that night, JD woke with what he thought was a cramp in his calf. He took some Aleve, drank water, ate half a banana and went back to sleep. The next morning he told me about it, but said he thought he felt well enough to play in a golf tournament that day. I asked him if he was sure and he just grinned, said yes and then something along the lines of, ‘Golf makes everything better’ in his very JD way.

He played the tournament with my brothers and another friend and they won! The girls and I joined him at the golf club for the post-tournament dinner and awards ceremony. The girls loved to watch their Daddy play golf. After the events concluded, we went home and had a normal evening. We bathed the girls, tucked them into bed and then we went to bed.

JD left for work early that Monday, as he always did. We didn’t see him in the morning, but he texted me a picture of a rainbow, said his leg was still hurting a bit and he was going to head home early, he’d see me later.

He never made it home.

I received a phone call from a local friend, who works in the law enforcement field, who informed me JD was in what they thought was cardiac arrest and he was going to be airlifted to UVA hospital. I left work after the call and drove entirely too fast to get to JD. I was hopeful to join him on the flight.

By the time I arrived, JD had been dead for nearly an hour. He had died inside a CVS pharmacy two miles from our house. In talking with witnesses and friends in the medical field, we assume JD was feeling some tightness in his chest and likely stopped to check his blood pressure. He died before he was able to do so.

It was all so surreal. I remember whispering to him, ‘I’m here now, you can get up…JD, I’m here now.’ That was the last time I saw him.

JD had this way of making everyone around him feel special. Loved. Seen. Especially me. We laughed all the time, we loved one another fully, supported each other’s goals and had the silliest inside jokes. I truly felt his love made me whole. And then, he was just gone.

I became a widowed Mom of two young girls at the age of 38. For a long time, my life felt like a nightmare. One I relived over and over. How was this my reality? I was an event planner. I planned everything. This wasn’t part of my plan. How was I supposed to do life without JD? I didn’t want to.

Soaring Spirits International made me realize I wasn’t alone. Through Camp Widow, I met other widows who ‘got it’ and helped me to realize I wasn’t crazy and yes, I could do this. With the support of this group, my family and friends, my daughters, bubble baths and nature, I’m doing it.

It has now been six years since JD died and I’m genuinely happy most days. I’ve regained my sense of self and life feels almost normal again, but I miss him. I miss being in a relationship.

Some dates have been lovely, some have been horrific and others have been, well…hilarious or just weird.  I had a man tell me he was glad my husband was dead, because we wouldn’t have to deal with ‘baby daddy drama.’ He followed this comment up with, ‘No offense.’ I’ve had men think I am a meek and mild, lowly widow who is in need of saving. Umm, no. I’ve had men be extremely jealous of my dead husband and thankfully, I’ve also met some really wonderful men who I’m still very good friends with; we just didn’t click in the relationship sense.

Many men don’t seem to understand love after loss is possible. Yes, I will always love JD, but there is room in my heart for new love. In fact, I feel like I have so much love to give and nowhere for it to go. Through all of the ups and downs of dating, I’ve tried very hard to remain true to myself and our daughters, and to remain grateful. Grateful for the lessons of life and for the reminders of what it is I want and need in my life and more importantly, what I don’t want or need.

Death has a way of putting things in perspective. I find myself holding onto the joy of simple moments a bit tighter and overlooking the silly little things. Our girls have so much of their Daddy in them and they keep me going. I’m grateful for the ways in which we’ve rebuilt our life, just the three of us. We talk about JD all the time and we feel blessed to be able to honor his memory.

Every year, we hold the JD Dickinson Memorial Golf Tournament & Silent Auction. This event allows us to raise money for local scholarships and community programs for children. We have also made Random Act of Kindness cards in JD’s memory we use to spread joy to people however we’re able.

To say JD made an impact on this world is an understatement, and we will continue to share his love, tell his stories, and shine his light in all the ways we can.”

This story was submitted to Love What Matters by Amanda Pace Dickinson. You can follow her journey on Instagram and Facebook. Submit your own story here, and be sure to subscribe to our free email newsletter for our best stories, and YouTube for our best videos.

‘I was 32 when my husband suddenly died. I wanted to have children with him. Being without him is terrifying.’: Widow finds the ‘beautiful balance of life after loss’ with 2-year-old son

‘The officer said, ‘There’s been an incident at the pool.’ I expected stitches. ‘I’m going to get right to the point, Jason died tonight.’: Woman diagnosed with cancer after husband’s death, ‘I’m choosing to LIVE’