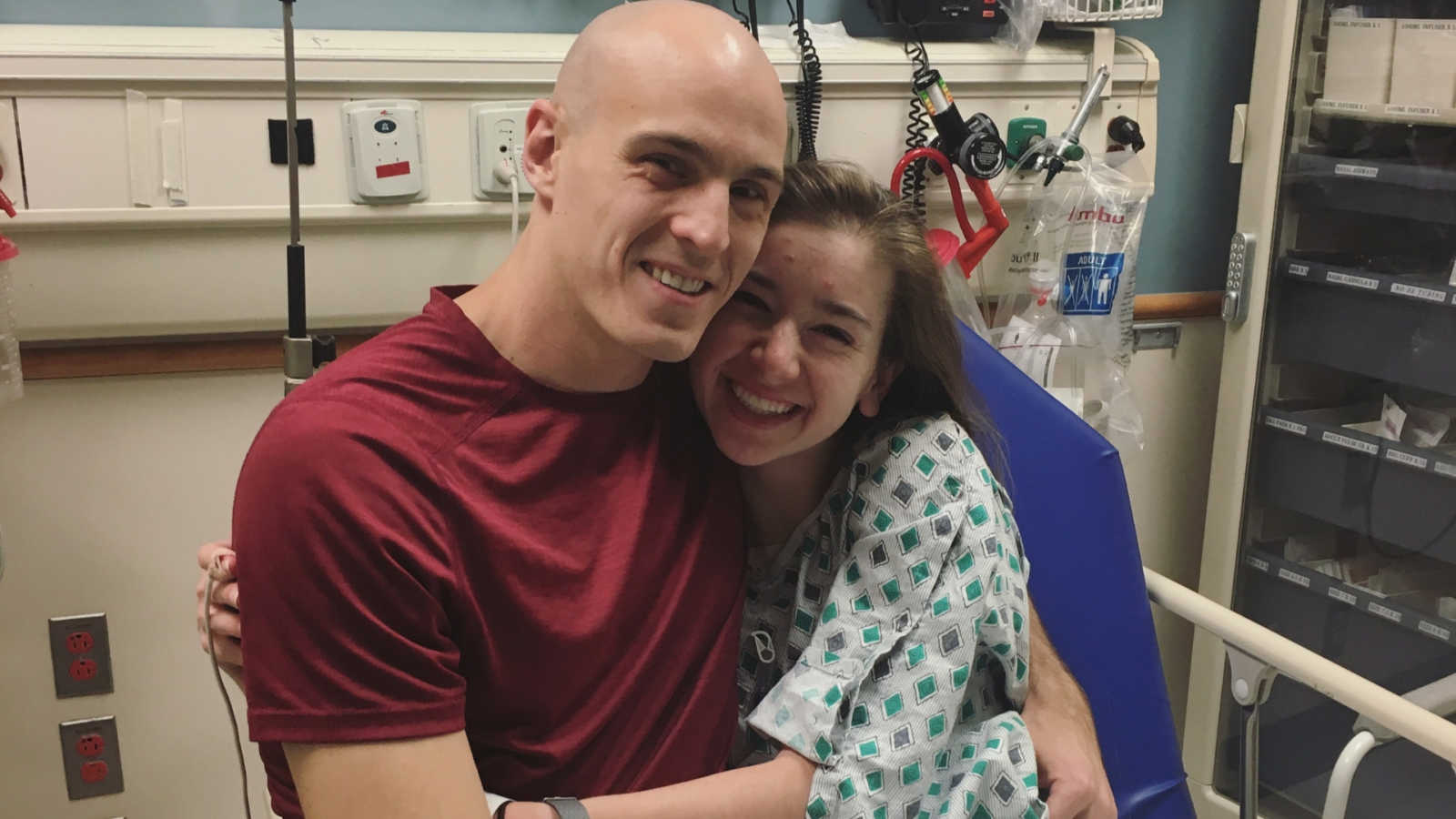 “It’s all in your head – you just need to be happier and go take a walk, be a ‘normal’ twenty-something.’ I had just woken up from my colonoscopy, still bleary-eyed from the anesthesia, and these were the words my gastroenterologist said to me. I laid there and sobbed, how could it have come back normal? How could I have so much abdominal pain, how could I poop twelve times a day, how could any food I eat make me want to throw up if everything was normal?

I’ve had gastrointestinal issues since the day I was born. I was constipated throughout my entire childhood, relying on laxatives, suppositories, and mineral oil to poop once a week. My parents brought me to three GIs before I was even two-years-old, but the response was always ‘that’s normal for kids, make sure she’s eating fiber and getting enough exercise, and she’ll grow out of it.’ But I never grew out of it. I ended up thinking that lying on bathroom floors after every meal while writhing in pain was normal. I even ended up in the ER while in middle school with what I thought was appendicitis because the pain was so excruciating.  After hearing enough doctors downplay my symptoms, watching them roll their eyes as they told me it was ‘just gas,’ I stopped telling anyone how miserable I was.

My digestive system limped along until October 2016. I was training for a 14-mile Spartan Race with my boyfriend and one week before the event, I woke up with what I assumed was food poisoning. Initially worried I’d missed a whole day of my training plan, I started panicking when my diarrhea kept getting worse and ended up turning into straight-up blood. I spent the hours I should have been in an airplane flying to the race instead prepping for a colonoscopy after being admitted to the hospital from the ER. The doctors initially believed I had Crohn’s Disease, but even with heavy-duty steroids and a PICC line administering TPN, I wasn’t improving. Eventually, I left the hospital after 13 days with a diagnosis of ischemic colitis and a promise from the team I would be up and running in a couple of weeks. But I never got better. I took ‘incompletes’ in all of my courses at school and went home feeling utterly defeated.

I knew my body and I knew something was up, so over the course of seven months I visited every specialist imaginable. None of them had any idea what was going on, and I even had several second-opinion doctors tell me it was all in my head. Finally, I saw a gastroenterologist who did an X-ray of my abdomen and found out what was going on: I had five feet of stool sitting in my colon and small intestine, backing up into my stomach. No wonder I didn’t feel good. While juggling my second-semester senior year courses, plus the courses I hadn’t finished from the previous semester, I traveled back and forth from the hospital where they conducted several tests that no human should ever have to go through, and especially not at the age of 21. I can remember sitting in a waiting room poring over my notes for the next day’s final exam while drinking barium for a CT scan, wondering what my life was becoming. But once all of the results came back, my doctor told me I had ‘anatomical and functional abnormalities of my colon and rectum’– which meant no matter how hard I tried, I’d never be able to poop normally without some sort of surgical intervention.

At 2 PM on May 14, I walked across the stage and graduated Summa Cum Laude as my professor handed me a diploma, and at 1 PM on May 15, 23 hours later, I sat in the hospital as my surgeon told me I needed an ostomy.  To say I was terrified would be an understatement. I was twenty-one, supposed to be healthy, and here I was, needing a surgery that most patients have in their seventies. I didn’t know much about ostomies aside from the stigma that they smell bad, they leak everywhere, and they destroy any chance of wearing cute clothes. So I did what any normal human would do: I had an emotional breakdown, and then I started looking for information everywhere I could find it. I watched YouTube videos that showed people doing bag changes, I read blogs about post-surgery tips and tricks, and I met with nurses who would take care of me once I had an ostomy of my own.

But something I found a little disconcerting was that most of the resources I found were directed at people at least three times my age. It was hard to identify with patients who were talking about how their ostomies still let them play games with their grandkids and didn’t stop them from taking brisk walks around the block. That’s not to say there aren’t others my age with ostomies, there are plenty of twenty-somethings who have bags due to inflammatory bowel disease, birth defects, or freak accidents. But none of them were telling the story that had become my reality. And so I started writing.

I posted my first picture on my blog one week before I went in for surgery. It was a way to process my thoughts by getting them out of my head and onto a page, plus it meant I didn’t have to tell my friends and family the same story over and over again. I knew I wanted to name my ostomy as a coping strategy, and the alliteration of Olly the Ostomy fit perfectly with my name. But because I wanted to share my story with the world, the name MollyOllyOstomy had a deeper meaning. When you’re little and you play hide-and-seek, the seeker shouts ‘Olly Olly Oxen-Free’ to let everyone in hiding know it’s safe to come out. That’s what I wanted to do – let those with ostomies and other chronic illnesses know it’s ok to come out of hiding and share their stories. All I had to do then was meet Olly.

I met my new best friend on June 14, 2017. When I woke up from surgery, I didn’t have any of the abdominal pain that was constant for most of my life. And I knew right then I was going to love Olly even when he was a troublemaker. After all, he gave me my life back. That was more than a year and a half ago, and I’ve come a long way since then. It hasn’t always been easy – in that time, I’ve had a ton of bag leaks, some skin breakdowns, a handful of messy bag changes, and plenty of good cries. In that time, I’ve had three surgeries, I’ve lost three organs, and I’ve spent more than 60 days in three different hospitals. And in that time, I’ve graduated with a Master’s degree, I’ve hiked in the Grand Canyon, I’ve started a full-time job, and I’ve gotten engaged to my best friend. Would I like to forget some of the more traumatic moments from the last 18 months? You bet. But would the amazing moments have happened if I were still miserable without Olly? Probably not.

There are plenty of days where I want to quit and stomp my feet and ask ‘why me’ and have a full-blown meltdown. And that’s ok – I’m only human. But there are two things that keep me going. The first is my support system of friends and family who carry me when I can’t support myself, walk by my side when I need some extra motivation, and watch me run when I’m ready to take on the world all by myself. I have a mom who has slept in the hospital every single night I’ve been admitted. I have a dad who would all but buy me a pony if it would make me feel better. I have a brother who will tell jokes to make me smile when I’ve got a permanent scowl on my face and I have an incredible fiancé who has never stopped loving me and fully embraced Olly. And the second thing that keeps me going? The ostomates who sit in silence and struggle to accept their new friends. It’s not an easy path we travel down – no one wakes up one day and thinks, ‘hey, I wish I pooped in a bag!’ But it’s a path that’s worth talking about, one that we shouldn’t be ashamed of taking. So if I can make a difference by sharing my story, I’m certainly not going to be quiet about it. Olly and I have got plenty to say about our new ‘normal.”

This story was submitted to Love What Matters by Molly Atwater. Follow her journey here. Submit your story here. For our best stories, subscribe to our free email newsletter.