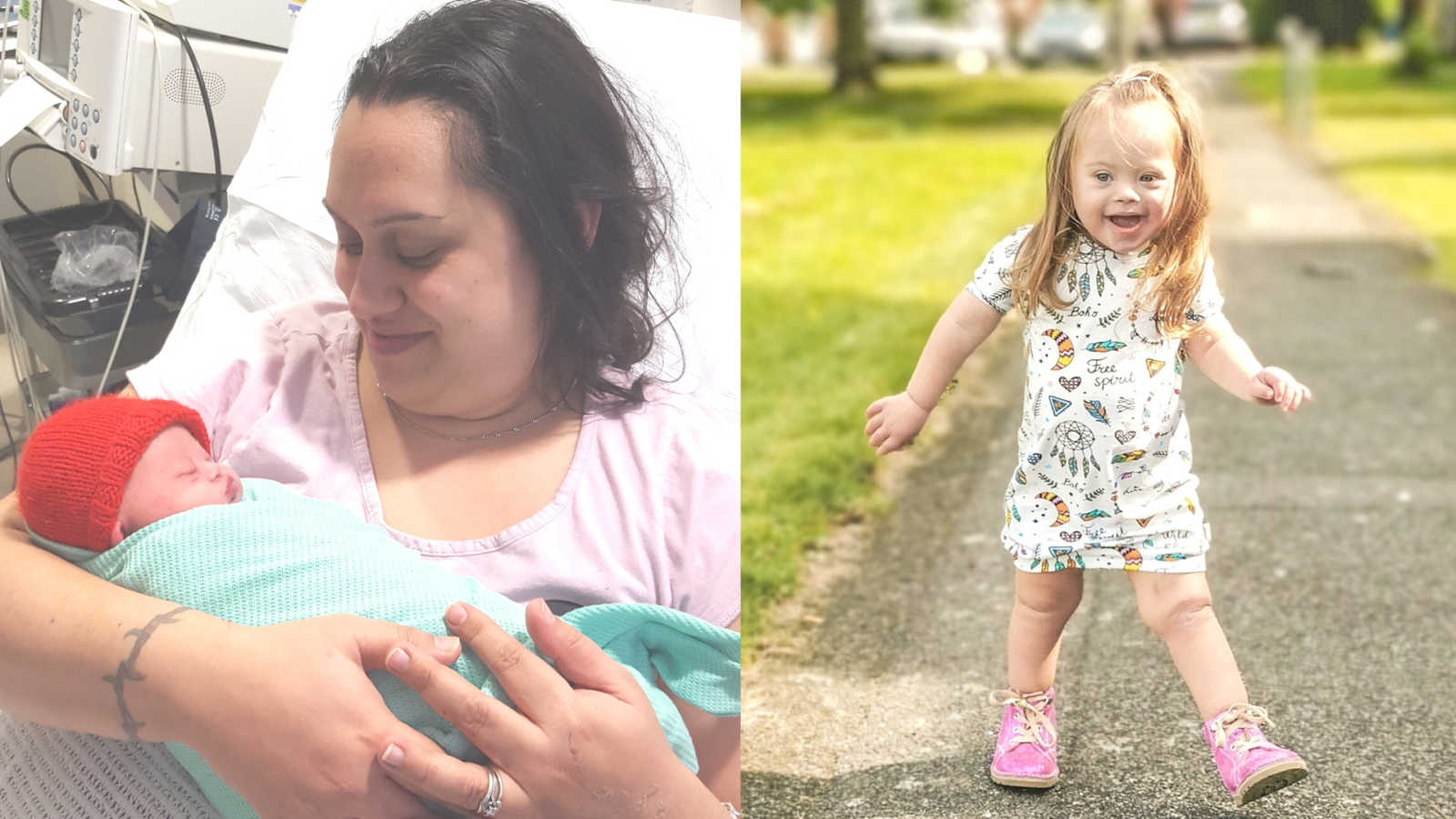 “My husband and I had a difficult time trying to get pregnant. He already had a daughter from a previous relationship, and I knew I might struggle to conceive from a young age. At 21, I was diagnosed with polycystic ovarian syndrome. It didn’t bother me then, as I was young and didn’t think about being able to have children. After Nick and I married, we decided we would try for a baby. After a year of no luck, we went to the doctors who referred us to the fertility clinic, and after both of us took a number of tests, they prescribed me with some drugs. They didn’t work the first cycle. In the second cycle, we went for a scan to see if they were working. The sonographer saw a tiny little egg and said it was too small to be released so to give it a few days, then have sex.

So, we did and carried on as normal. It turned out that tiny little egg was the one that was going to make me a mum. On the 5th of December, 2015, Caiyro was born, a healthy baby boy weighing 7 pounds. He was perfect. We had no complications except developing pre-eclampsia during labor.

We were happy but knew we wanted more children. We decided when he was one, we would try again. My periods had regulated, which was good as I had never had regular periods before. When Caiyro was 5 months old, I missed my period, so I took a test and it was positive. We were so happy, but after a few days, I started to bleed. I went to the doctors, who sent us for a scan, and we saw a tiny little heartbeat at 6 weeks pregnant.

We went for the 12-week scan where they also offer the screening test for Down syndrome, Edwards syndrome, and Patau syndrome. We did everything, the same as we did with Caiyro, and had the screening. The very next day, I had a phone call, telling me my baby was at ‘high risk’ of having Down syndrome and could I go in as soon as possible to discuss our options. I went in with my mum, as Nick was working, and my mum asked what caused the ‘high risk.’ They said I have a low PAPP-A, which is a hormone that is made by the placenta. They said it may affect the growth of the baby later on in the pregnancy. They then went on to ask if we wanted an amniocentesis to test for Down syndrome. We declined after we read about it and the risk of miscarriage. We didn’t want to risk our baby, after all, it didn’t matter to us.

At 16-weeks, we went for a private gender scan and we had the harmony test, which is a non-invasive test with a 98.8% accuracy rate. Looking back, I’m not sure why but I needed to know. Maybe so I could mentally prepare for it because I didn’t do any research and I didn’t read any information given to me about Down syndrome. The test came back positive, and I cried. I mourned for the baby I thought I was going to have and I worried about her health, what she would look like, if I would be able to look after her.

It was difficult but I think until she was born, it was easier to pretend everything was normal, so we did just that. At 20 weeks, we went for a scan in the fetal medicine department where they discovered Bella had a hole in her heart, excess fluid on the brain, small legs, and a small nose. All of these are soft markers for Down syndrome. Our consultant was really good. She would give us photos of Bella’s face and she was always really positive.

I think we were really lucky that we were never offered a termination.

At 29-weeks we went for another scan, where they discovered the blood flow from the placenta wasn’t giving Bella everything she needed, which was affecting her growth. From then on, we were scanned weekly, sometimes twice a week to monitor Bella’s growth. It fluctuated over the weeks, and on the 18th of January 2017, they said they wanted to induce me and bring Bella into the world. The next day, I was induced, and after an uncomplicated birth, Bella arrived on the 20th of January weighing 5 pounds and 7 ounces.

That moment she was placed in my arms, all the worries I had, all the fears were gone and the instant rush of love and protection followed. Bella had Down syndrome, you could tell just by looking at her. But they needed to do the test for the diagnosis. We had a cuddle, then they took her away for an in-depth heart scan to check for murmurs or anything else.

Bella was the most beautiful baby, she fed wonderfully and didn’t need to be tube-fed. She had two holes in her heart, one of which needed to be monitored but luckily closed up on its own after 5 days. We took her home and our family was complete.

The first year was difficult. Bella had colic and didn’t sleep well, but by her first birthday, the holes in her heart had both closed on their own. Bella to us was a superhero in her own way.

Once Bella turned one, she got quite sick. She would vomit regularly after eating. In May that year, when we saw her pediatrician, she had lost so much weight she was practically just skin and bones. We were referred to a dietician and Bella was given medication to stop the sickness. By her second birthday, she had gained weight and had finally stopped being sick. She is still on the medication and may need to be for some years, but she is at a healthy weight for her age.

Bella will be three in January. She is a happy, social little girl and she is just like any other toddler. She didn’t walk until she was 2.5 years, but now she does. She is everywhere, and she is the most beautiful little girl I have ever seen. When I look back to the beginning when I felt all the worry and sadness for my baby, it makes me feel so guilty. Even going back to the day she was born when we were doing the announcement post, I was looking for photos where the Down syndrome wasn’t so obvious. I feel so guilty about that because I was still in some sort of denial. Now I will happily and proudly tell people Bella has Down syndrome. It doesn’t define her. It isn’t her, it is just a part of who she is, and I wouldn’t take it away from her, not in a million years because, without it, she wouldn’t be who we know.

Bella was the little girl we needed to complete our family. Yes, it has been difficult, and she has delayed development, but she is our little girl. She is what we didn’t know we needed and has opened our eyes to a whole new world. Everyone in our family has embraced Bella, everyone absolutely adores her, and she is the perfect little end to our family. Everyone who meets Bella falls in love, it’s so difficult not to she’s amazing and every single day I am so proud to be her mum.

The termination rate in the UK is shockingly high: 90% of babies who have a ‘high risk’ for having Down syndrome are terminated. That is because people are afraid of what’s different. We want to show that you don’t need to be afraid! You just need to accept and embrace, because even if we could, we wouldn’t take Down syndrome away from Bella.”

This story was submitted to Love What Matters by Jessica Gould from the United Kingdom. You can follow Bella’s journey on Instagram. Submit your story here, and be sure to subscribe to our free email newsletter for our best stories.

‘We found a hole.’ His heart was beating. What did we miss?! I wasn’t a special needs mom. I didn’t have the qualifications for that.’: After 7 kids, 3 miscarriages, mom births baby with Down syndrome, ‘he is our extra special little man’

‘I have to tell you something. I’m so sorry.’ I burst into tears. I hated others being sad about our baby.’: Parents shocked by Down syndrome diagnosis after signing paperwork to not do genetic testing, ‘We are keeping the baby’