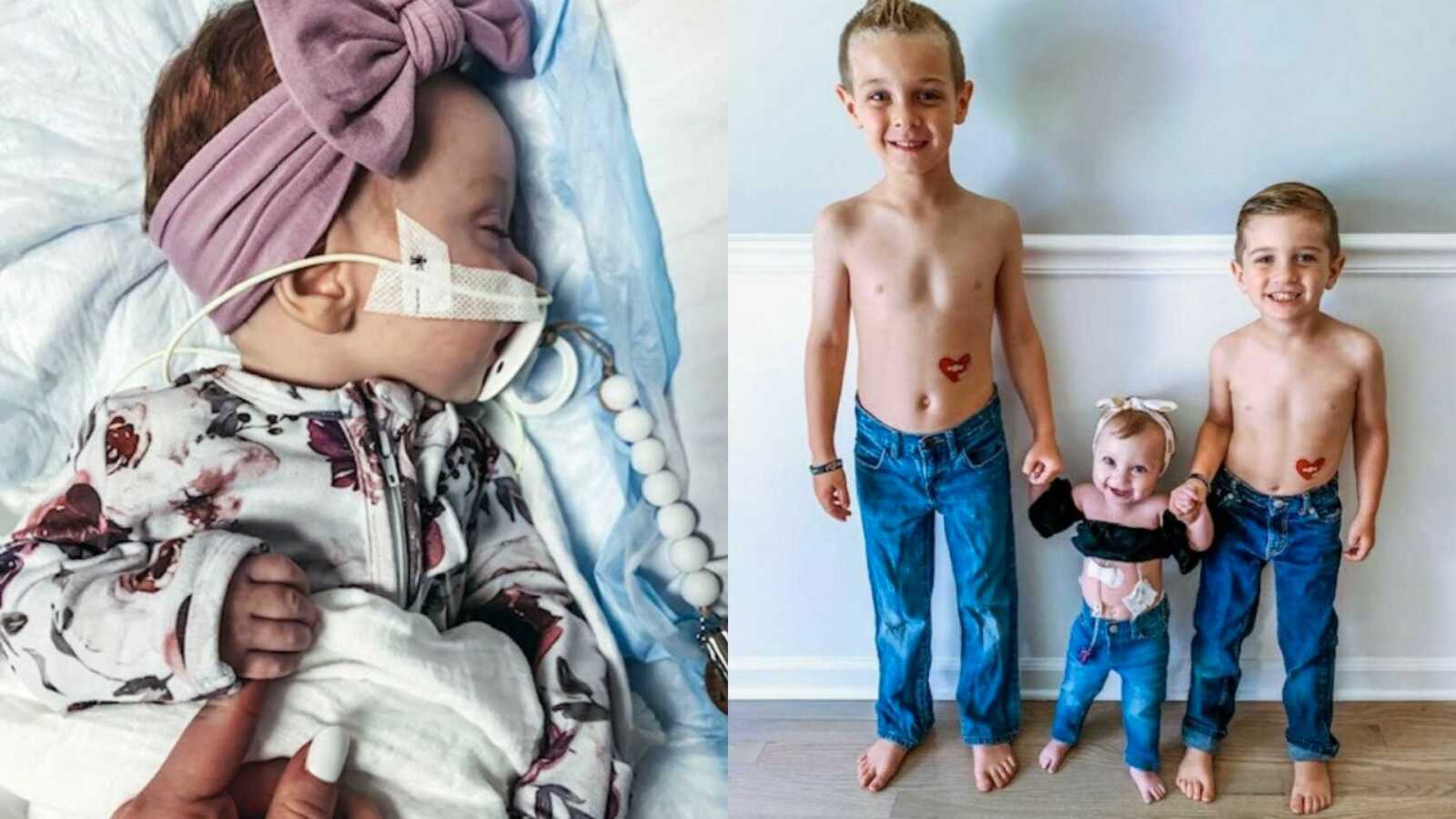 “We’re the Ward family! We are high school sweethearts who have two sons, six and four, and a one-year-old daughter with a feeding tube! When Scarlett was an infant she started frequently throwing up. It wasn’t long until hospitalization after hospitalization, she was failing to thrive. We tried just about everything you can think of including breast milk, fortified formula, dairy-free formula, broken down formula, but she was still struggling to gain weight.

After multiple hospitalizations, tests, and procedures, they concluded that she had delayed gastric emptying and severe GERD. At three months old, she was put on multiple medications and had a nasogastric feeding tube placed; this is a tube that goes into your nose and down into your stomach. By placing an NG feeding tube we were able to give her the nutrition she needed at a very slow rate that her stomach could tolerate. That, in combination with the medications to help subside her symptoms and contract her stomach at a faster rate, she finally started to gain some weight.

After feeding tube training and education from the hospital, we were finally discharged and sent home to get used to our ‘new normal.’ It was overwhelming, to say the least. Our house quickly began looking like a hospital filled with medical supplies, medications, and feeding tube equipment. She was on a very strict feed and medicine schedule that had us busy around the clock, not to mention the nonstop follow-up appointments that came quickly after.

She had weekly weight checks with her pediatrician, an in-home nurse that would come three times a week, started occupational and physical therapy, and had multiple specialists follow up appointments that were 2.5 hours away. Oh, and add on about a million and one phone calls with insurance, medical supply companies, and doctors… all while still being a good parent to our other two kids, and making time for each other. We were barely keeping our head above water but knew that it was worth every single bit of stress to get our baby girl healthy and thriving again.

However, the NG tube quickly became miserable as she became more active and would pull it out easily. We would have to hold her down screaming to put in a whole new NG tube (we were trained to do so before leaving the hospital), and her poor cheeks were broken out from constant tape holding down the tube. We started discussing other options like a gastrostomy tube, which is a surgical feeding tube that goes directly into the stomach.

Although it was a hard pill to swallow, we came to the realization that the feeding tube was going to be long-term. After talking with several other medical moms online that were in similar situations, it put my worries at rest about her getting a gtube. Just about everyone I talked to said although surgery is scary, it was the best decision they made. We talked with her GI team and surgeon shortly after to go over details and scheduled surgery for her to switch to a gtube.

Looking back, I am SO glad we made the switch. It only has to be changed every three months and she can’t (easily) pull it out. At six months old, she had surgery to place the gtube, and just after a few days of being inpatient, we were discharged home to let her recover. It wasn’t long at all until she was back to her playful, smiling self. She is now thriving and is truly the happiest little girl you will ever meet. It is still overwhelming on days; there is constantly something to do whether it’s giving meds, starting or stopping her feed pump, flushing her feed line, prepping formula or flushes, calling to make follow-up appointments, or reordering medical supplies and medications. The list goes on and on, but every second is worth it.

As much as we hope one day she won’t need the feeding tube, we are SO incredibly thankful for it. It saved her life and gives her the nutrition she needs to thrive. Right now she is only able to tolerate very small amounts of liquids or purees by mouth. We have started experimenting with letting her try new things to get her interested in food and avoid oral aversion, and although right now she is still 100% tube dependent to get her nutrition, she is loving getting little tastes of fun things like popsicles, lollipops, and baby food purees.

It has been and will continue to be a long journey, but we are taking it one day at a time. She has the best big brothers in the entire world who are her biggest supporters that constantly cheer her on and encourage her. They call her ‘super tubie’ and just adore her. Their bond is truly indescribable. We started sharing her story online to help educate others, raise feeding tube awareness, and help others going through a similar journey know that they are not alone.

It truly made a huge difference to be able to learn feeding tube hacks and tips, and even just talk to people who have experience with feeding tubes. It takes a village and finding a community, even if it is online, makes a world of difference to be able to talk to people who just get what you are going through. We hope we are and will continue to do that for other people too!”

This story was submitted to Love What Matters by Kelsey Ward. You can follow their journey on Instagram. Submit your own story here and be sure to subscribe to our free email newsletter for our best stories, and YouTube for our best videos.

‘The very best thing we could have ever done.’: Special needs mom raises feeding tube awareness

‘He had inhaled poop into his lungs. The only thing I could do was rub his forehead.’: NICU mom shares breastfeeding journey

‘It’s not her, it’s him. She isn’t leaving.’ I sat there, wide-eyed, waiting for them to explain. I thought I was hurting my baby.’: Preemie warrior graduates NICU after emotional 67-day stay

‘You’re EXACTLY what your baby needs.’: Mom of 6 gives parenting advice, ‘We still have much to learn’