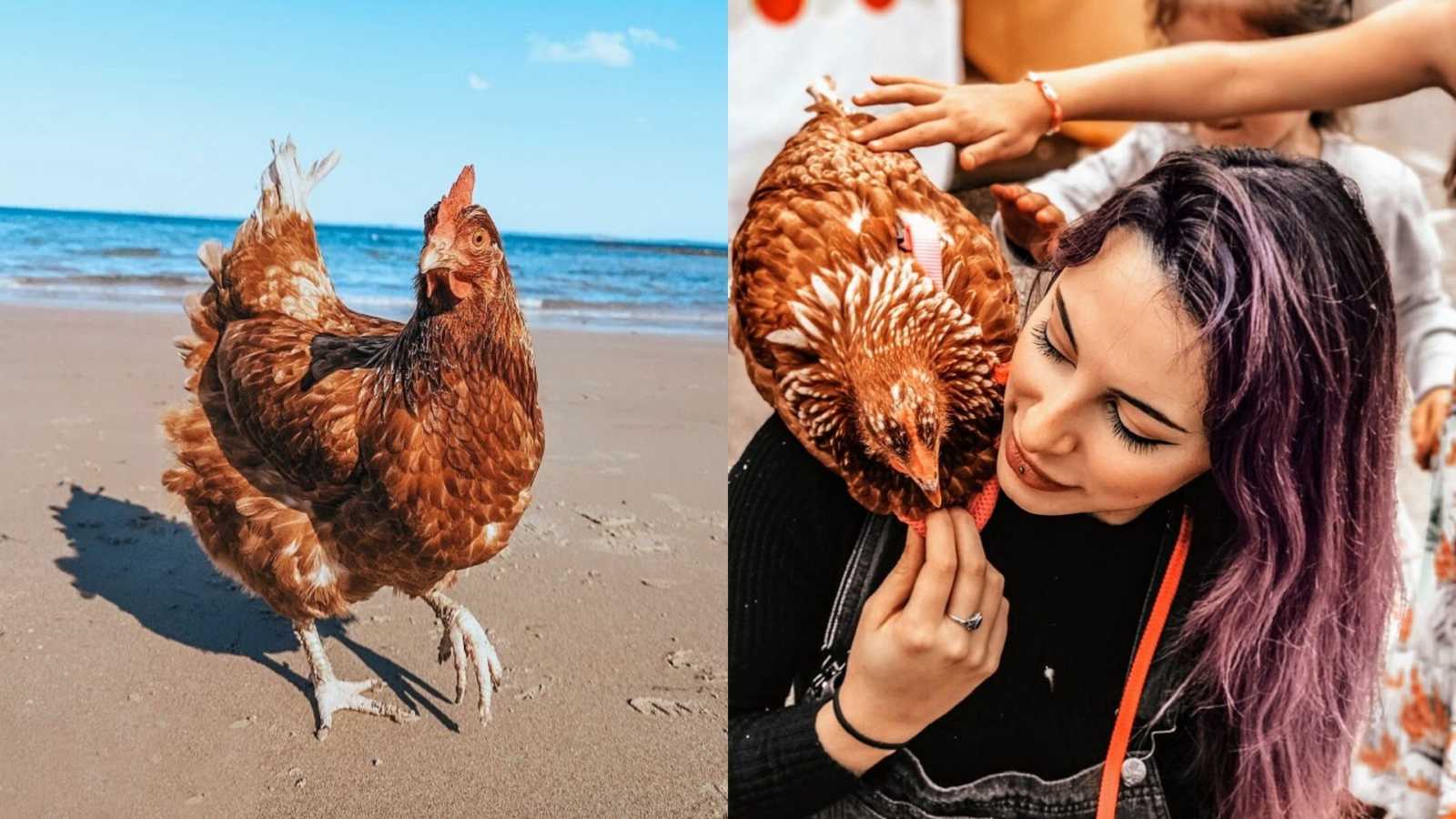 “3 years ago, I got a call from a friend to pick up a stray chicken who was unclaimed and soon to be euthanized by the vet. While I was watching the video of this mystery chicken, I just knew there was something special about her. My mom and I drove 40 minutes each way to pick her up. When I collected her, she was skinny, hungry, and riddled with lice and worms. I treated her and nursed her back to full health. 3 years ago, I met my best friend and soulmate.

Ever since I’ve had her, she’s been a quirky little hen. She never liked hanging out with the flock, and much preferred being on her own in some unexplored part of the garden. She would sit on my lap and go to sleep or perch on my shoulder.

I decided to take advantage of the fact that she was so calm around me. I bought her a little harness and a cat carrier backpack. Our first outing was the local beach, and she absolutely adored it. She loved the sand, the sun, and the sound of the water. We went many times, bringing smiles to people’s faces every time they saw her. We would sunbathe and eat chips together. Then, we started going to local events like car shows, agricultural shows, and more. She even went shopping with me and got a photo with a mall Santa for Christmas!
In December 2018, I got a portrait tattoo of Chookie on my leg, so she could be with me forever.

Chookie has been viral multiple times online, and she even ended up on the front page of the local paper. She would stream with me on Twitch, and there were articles written about us. People around the world loved Chookie, would send her gifts, and even helped pay for her vet bills!

My Chookie has helped me through so many tough times in my life. I’ve held her while I’ve cried, and I’ve talked to her about my problems. She’s been house hunting with me, she’s been to see my aunt in a nursing home, and she comes with me to psychologist appointments for moral support. She sits on the couch and preens my hair; she calls me over for food; she sleeps with me at night and cuddles up to my neck; she sits on my shoulder while I’m preparing food or when we go out; she shares lunch and dinner with me.

In October 2019, Chookie started showing signs of serious illness. She was waddling like a broiler chicken, following me around and complaining, pooping yolky liquid, and she had a swollen abdomen. We took her to the vet: he took one look at her, and then rushed her to the back room, advising me there was a small risk involved in the procedure he was about to do on her, but that he had to do it now.

He drained 600ml of yolky fluid from her abdomen that day. Chookie was suffering from egg yolk peritonitis (EYP), a severe but fatal illness in laying chickens. She would have died if we had left it for even a few more hours. He gave her a hormonal implant (deslorelin) to prevent her from laying more eggs inside of herself and kept her there for 3 days, crop feeding her regularly.

Chookie had to get an implant every 3 months from that date to prevent egg-laying, but other than that, she seemed to be happy and healthy. We continued going on adventures together.

In June 2020, Chookie started showing signs of illness again. Her crop wasn’t emptying overnight, and her poop was odd. The vet did a blood lead test, and her results came back as 0, meaning she had no lead in her blood (the vet informed us that it’s really rare but really good).

He then asked to keep her for a few days to run tests and take care of her. They crop fed her some white dye and took an X-Ray to see what was going on, then continued to crop feed her nutrients twice a day while giving her medication to manually move her crop.

The results came back, and they gave us a call, informing us she did, indeed, have crop stasis, but they didn’t find anything significant. I’m aware crop stasis is never a condition on its own, and it is always caused by something else, so I called another chicken vet and made an appointment for the next day.

We went to pick Chookie up from the first vet, and he then informed us that they did, in fact, find something. There appeared to be a large unidentified mass inside of her, which was squishing her organs and preventing her from having normal bowel movements. He said they could open her up and have a look to diagnose the problem, but there was only a slim chance it would be curable, and there was a risk involved.

We went to see the second vet, and he did an ultrasound on Chookie, confirming she did have cancer and a lot of it. It would be inoperable, as there was too much of it, and it was tangled in her organs. He advised very strongly against surgery and instead suggested treating her similarly to another chicken he has seen with cancer.

This includes meloxicam (anti-inflammatory and painkiller) twice a day, omega 3 oil (proven to help reduce and prevent cancer in female humans and chickens), hemp oil (pain killer), and continuing the hormonal implant. I also crop fed her when I felt she wasn’t eating enough.

Things had been looking up since then, as her poop returned to normal, her crop started moving on its own, and her appetite increased. But just a few weeks later, Chookie became very swollen and uncomfortable in her abdomen. I suspected she had fluid inside of her again, and it needed to be drained ASAP as her breathing was getting worse. I took her to the vet, and she confirmed there was fluid build-up. They drained it, and it was a dark brown color, indicating internal bleeding due to the tumor.

She came home with me but started spiraling quickly. Crop stasis set in again, and after a couple of days, she stopped eating and drinking on her own. That night, I knew she was going to leave me soon. She slept on my head and didn’t want to be away from me.

The next day, I was trying to hold it together, but I knew her time was up. She was looking flat, she couldn’t balance, she wasn’t eating or drinking, and she was just pooping straight liquid. I picked her up and held her in my arms. She was getting frailer and frailer by the minute. I decided to stay up with her, so I could be there for her during her passing. It’s what I wanted for her.

As everything slowly shut down, she held onto my finger tightly as soft music played. She tried to hold on for as long as possible, snuggling into me and opening her eyes for short moments. I told her she could go and to close her eyes.

She closed her eyes.

‘Forever in our hearts and on my shoulder.’

‘Til we meet again.”

This story was submitted to Love What Matters by Angel Muiri. You can follow her and Chookie’s story on Instagram. Do you have a similar experience? We’d like to hear your important journey. Submit your own story here. Be sure to subscribe to our free email newsletter for our best stories, and YouTube for our best videos.

‘I was waiting at a red light when I lost consciousness. I called my Sergeant. ‘I’ve been in an accident. Something isn’t right.’: Officer credits rottweiler for saving her life post-traumatic brain injury