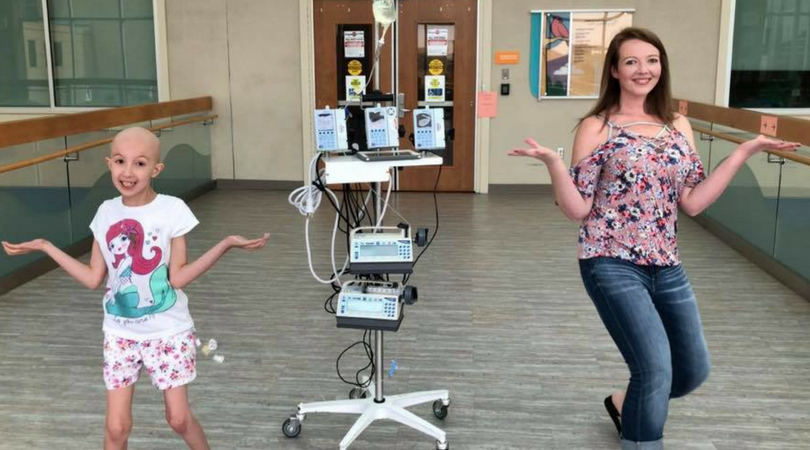 “About 3 weeks after Abigail had her routine wellness visit she was complaining of back pain. Within a couple hours of hot packs and Tylenol she was still shaking in pain to the point she threw up. Alyssa called the after-hours nurse who told her to bring Abigail to the ER. The ER doctor ran blood work, strep test, flu test, did ultrasound of her bladder and kidneys and had no answer for her pain. He directed her to follow up with her PCP. At the follow up her Doctor could not believe how different Abigail was. Abigail couldn’t bend to touch her toes. So, they gave her some ibuprofen and about 3 days later they followed up with her again. Also, to perform a scoliosis test. At that point her PCP ordered an X-Ray. The x-Ray showed 10% scoliosis. So, the plan was to follow up with Dr. Wanders pediatric ortho doctor. He noticed how tight Abigail was and recommended 6 weeks of PT before doing any further testing. His concerns were valid and when Abigail went to see him she was having a ‘good day.’

Before the 1st day of PT Abigail threw up twice at school with no other symptoms. As silly as Alyssa felt, she brought Abigail to her PCP both times anyway. After the second trip her PCP ordered an MRI. Before the MRI and after the 1st PT session Alyssa drew Abigail’s blood since Abigail was crying out in pain. The results would finally reveal something was abnormal. Elevated white cell count with no fever. Alyssa drew more blood and some inflammation markers; those showed swelling. So, the day came for the MRI. This test was ordered without contrast and expected to take about an hour. The test took 4 1/2 hours with contrast to scan the entire spine and MRI the brain including blood tests. Persistence on our part showed why Abigail’s back has been hurting so bad.

10% scoliosis is only the tip of this iceberg. There was a tumor. The tumor is sitting on a spot causing nerve pain and weakening the protective sheath which keeps the fluid in. A tumor is either cancerous or not. Abigail’s tumor is CANCER. We have finally said the words out loud. The type of cancer is a sarcoma.

Over the last few months due to the cancer and treatments our daughter Abigail has suffered severe back pain that has slowed her social life to a stop along with her energy level. We found ourselves asking why can’t we hold her like we did when she was little, making everything better? It had been months since Abigail and I had danced. She’s been in pain and has been tired for son long.

Recently at a pool party a couple friends did the ‘In My Feelings’ challenge and had me laughing. Later another friend had her twin boys doing their version while riding their power wheels. So, when Abigail watched this and began to laugh I asked her if she wanted to try. She seemed interested in learning the steps, so I quickly learned the basics and brain stormed with her about the idea of starting with her riding the IV pole and what we wanted to do during the free style. We first were introduced to riding the IV pole as a way of travel from a fellow cancer family and have been doing that part for weeks.

Abigail and I practiced the dance daily as she felt energy for about 3 days. We practiced in her room, in the hall and in the family house. We had an audience at the family house who clapped and laughed in joy at her efforts.

‘Abigail told the nurses she had a surprise. When they asked, ‘for who?’ she said, ‘the world!’

Quickly the views began to Multiply! I could hardly wait for Abigail to wake up, so I could tell her how in less than 12 hours we already have 23K views! To see the comments, views, shares and inspired movement really is amazing! Abigail said to me today as we approached almost 3 million views and the more we are recognized ‘mom, I wonder how many people will recognize us when we go To Paris after, you know, I beat cancer?’ Something special has happened here and we plan to keep humble and encourage a movement to find a cure!”

This story was submitted to Love What Matters by Alyssa Lewis-Bridges of Little Rock, Arkansas.  You can follow Abigail ‘s journey here. Submit your story here, and be sure to subscribe to our best love stories here.

Do you know someone battling cancer? Provide them with hope and courage by SHARING this storyon Facebook or Twitter.