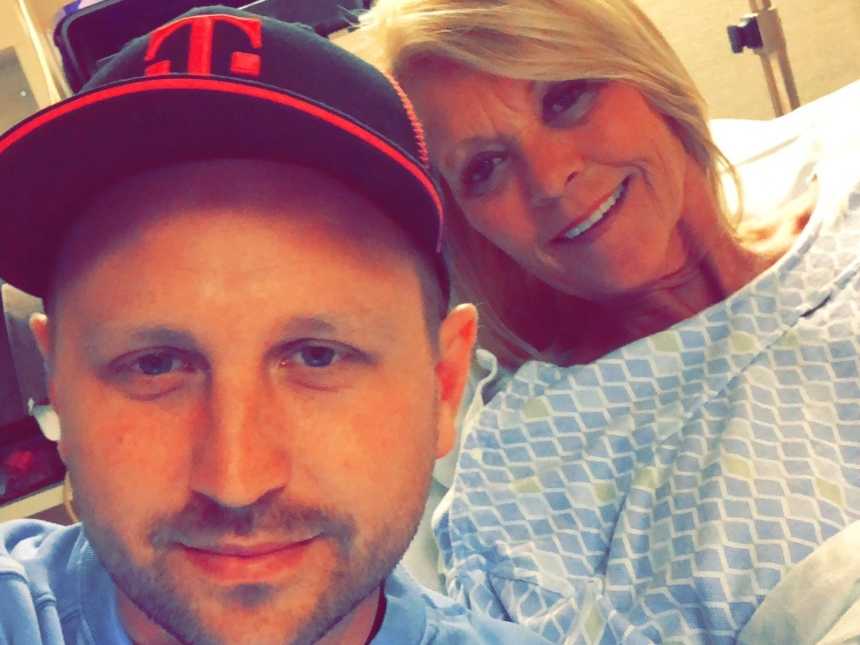 Aunt Barbara, my mom’s sister, was diagnosed with Peripheral Artery Disease. She had to have the open bypass surgery which has about a 20% chance of not making it through the surgery. She made it through, albeit never quite recovered. She was always in pain and the surgery had complications. My mother watched her younger sister struggle for years and couldn’t fight the pain. She became addicted to opioids during this time and she passed away last year a week after I got out of the hospital. We knew this surgery was bad, and seeing it first hand we realized how bad it was.

Fast forward to last year, March 2017. My arm was swollen and I couldn’t figure out what was wrong. It kept getting worse, but doctors kept sending me home. I kept going back. Again, and again. Misdiagnoses after misdiagnoses, new doctor after new doctor… Finally, I went to UCSF. They figured out that I had Thoracic Outlet Syndrome. It quickly went from, ‘You might have a fully blocked vein,’ to ‘Your vein is being blocked by your rib. We need to remove your rib.’ Well that escalated quickly.

About this time, I decided to share my story. Mostly for myself, but also to remind people to keep going back to the doctor, keep telling them something isn’t right. Keep asking and getting a second opinion. Don’t wait to go to the hospital, I waiting months too long.

Daily reminder to go to your doctor and get a checkup. Thanks to all my friends for coming by today. And my mom. 1st Surgery Monday. pic.twitter.com/qVDua9PHUZ

I got a random private message from someone I had never met. He told me I should go see Dr. Lee at Stanford, one of the best cardiologists in the game and that he specializes in this. Here’s the DMs:

Dr. Lee called me within 30 minutes. I told him everything and asked if they should remove my ribs. He said ‘yes,’ and that the doctor doing it was a good one. So I did it. Here’s me with my mom after surgery.

About a month later, my arm was really bugging me again. It felt completely blocked so I decided to reach out to Dr. Lee. Again, he responded instantly and brought me in.

I went. We discussed all the possibilities and we got to a place that was manageable. A week later my aunt died. My mother had been there for me and helped me so much, then lost her sister the day after I got out of the hospital.

Fast forward to about 4 months ago. My mom and I were at a concert in Los Angeles. When we left, she couldn’t walk with me. Every few steps she stopped. Her left leg would swell up. She knew what it was, she just didn’t want to say it. I said you have to go to the doctor.

Three words came back from the doctor: Peripheral Artery Disease. She was devastated. I remember the first call. She said a general doctor in LA told her she needed to have open bypass surgery exactly like her sister had. Devastated.

We talked it through and made plans to get a second opinion, but planped to do the surgery in July. We would get through this.

I had to get a second opinion. I thought about Dr. Lee, the guy who messaged me from Twitter. Cardivascular. Maybe he could help. I got all of my mom’s files and I sent him this email:

She flew up a week later. He said there’s no way she needed that surgery yet and he could do a microscopic version and she should be good to go. She did have 90% blockage in the arteries and they would have to do both legs. We thought this would take a long time for recovery. What happened next we couldn’t believe.

My mom flew back on Mother’s Day. My mom couldn’t walk up the stairs to my apartment or carry her bags, she could only walk a little bit then stop. We spent the day together being lazy. On Tuesday afternoon they started the surgery. Here’s us before the surgery and also what her feet looked like:

The surgery took about 2 hours. She then had to lay in bed and not move for 6 hours. She stayed the night at the hospital and I got a hotel. She woke me up at 7 a.m. ‘Come and get me, they are about to let me go.’

Less than 24 hours later they were letting her go. I wondered how much pain she would be in. I show up and she’s sitting in the chair, didn’t have to take any pain killers and said, ‘Let’s go get a burger.’

She walked out of the hospital. No big surgery. 90% blood flow back. And felt 1,000 tiems better than she had 24 hours earlier. We went and had a burger, then she wanted to see how far she could walk without pain…

It honestly just feels like a miracle. A seemingly random message ends up connecting the dots to one of the best doctors who made this happen.

Such is life. Randomness that becomes meaningful. Can’t say thanks enough for that random message and Dr. Lee always responding. Saved my mom’s life and I’m #twitterforlife…

This is us dancing with tears of joy.

I believe the world is full of people helping people and that most people are good. Just by simply sharing the situation I was in on Twitter, a stranger wanted to help. That’s the social media good I see happening. I believe it happens more than we think. I still can’t believe it saved my mom’s life.”

Dear everyone who works at @Twitter, you saved my mom’s life this week.

I thank you from the bottom of my heart.

Here’s the story. Crying tears of joy today for my mom, all because I sent a tweet. pic.twitter.com/kJ09K7VZsf

This story was submitted to Love What Matters by Shane Mac of San Francisco, California. Submit your own story here, and subscribe to our best stories in our free newsletter here.