“Even before I got pregnant, I told a friend I had a suspicion that I would be tested in a pregnancy. I am an OB sonographer at a high risk clinic, so I had no naivety in the experience of having a baby. I witnessed the absolute worst outcomes and helped patients process these outcomes. In the winter of 2013, I became pregnant with my first child. I was excited but understandably wary. I experienced a strong mom instinct that I needed to be worried. First thing on a Monday morning, I shut my ultrasound door and put the probe on my belly to check out the progress of the baby (as I did most Mondays). Immediately, I knew something was wrong. The baby’s heart appeared to be in the belly instead of the chest, there was a cystic hygroma coming from the back of her neck (thickened, fluid filled neck skin) and the liver and intestines were in a contained pouch outside of the body called an omphalocele. It took a few weeks and more scans to determine she likely had a rare diagnosis called Limb Body Wall complex. In my four years working at the time, I had only seen one case and they terminated the pregnancy in the first trimester.

We decided to carry to term and planned on palliative care at delivery. The NICU team would assess her and if they determined she was dying, they would hand her over to us with no extraordinary measures. We chose comfort care and love until she passed. It was the hardest experience of my life to be visibly pregnant at work while caring for other pregnant ladies and discerning whether to tell her story when asked. I did not want to give my patients any extra cause to worry, but I also felt like I was doing her a disservice by not telling her story. So, I decided to start a blog. It was mainly for our family and friends to read, since she had such complex findings, I didn’t want to repeat myself every time we went to the doctor. We had many strangers tell us in person or by email they were praying for a miracle. Knowing what I know in this field, it was improbable, but I held out hope.

She ended up being stillborn at 29 weeks 4 days. I mentally prepared myself for a c-section so that we could ensure her body would be intact and we could meet her alive. Since this would not be the case, we decided to induce labor. I had a specific doctor in mind to deliver her, since she was there helping us through the pregnancy. She was not on call the day I went into labor, but the attending doctor called her, and she came just in time. She was there to coax her lifeless body gently out of my body by calling her name, ‘Come out sweet Cora, so we can all meet you.’ I’ll never forget her compassion that day and filling the silence that would soon be deafening. We were able to have several family and friends in the room about 15 minutes after I gave birth. They all took turns holding Cora’s body. We were able to keep her with us for about 8 hours. When her body started to change and deteriorate, we knew it was time to call descendent care. Our family called and made funeral arrangements for us in the hospital and

Two months after we lost Cora, we started the adoption process to adopt out of Ethiopia; one month later we got pregnant with our rainbow baby. In 2014, Lydia joined our family healthy and strong. In 2017, we brought home our son Aben from Ethiopia after a long adoption process. We found ourselves wanting to complete our family with a third baby in the fall of 2018. Again, I had a very strong mom instinct that something was wrong. Around 7 weeks, I became concerned about the appearance of the baby’s head. I suspected acrania and it was confirmed at 9 weeks.

We sat in the room with the same doctor that delivered Cora with such compassion, who was telling us ‘I can’t believe this is happening again, I am so so sorry. Do you want to continue the pregnancy?’ This time we paused. It wasn’t as easy a decision as the first time. We had a 4-year-old daughter and 6-year-old son to think about. A baby with acrania does not have the top half of the skull and the brain floats in the amniotic fluid with no protection. Eventually, the brain deteriorates, and the baby has what is called anencephaly. Babies with anencephaly do not live outside of the hospital. Most die within hours. There is no cure or treatment or surgery that can fully fix it. In that moment, we put on the shoes of women who abort their crisis pregnancies. We did choose to carry to term, but this time was much more difficult. I was angry, bitter and stoic for most of the pregnancy. I had a hard time being in public, because I was terrified someone would ask me about my pregnancy and I would break down. We dreaded telling our kids but knew it would be better if this was a slow, continual talk over months than a surprise. When I was 20 weeks and showing, we told our kids I had a baby in my belly and that she would not be coming home with us. We told them she had a big boo-boo on her head that we could not fix and that she would probably die in the hospital. We also talked about her soul going to Heaven, like Cora. Our son, who just learned English a year prior asked, ‘Why can’t we just fly to Heaven and bring her back down?’

Our kids knew the situation and talked about it bluntly and at inopportune times. I was afraid to be out with them when they told strangers their baby sister was going to die. We were honest with them and we let them see us cry. We also had a couple of books that were very helpful for their understanding of the situation. During the pregnancy, I found out about a Cuddle Cot through an anencephaly Facebook support group. I didn’t have one, nor had I heard about them for Cora. They are a refrigerated bassinet that keeps the baby’s body cold and intact to give families more time to spend with their babies. The doctors I worked with tried very hard to get them approved for me to use in the hospital and it wouldn’t pass inspection. I also decided to pursue organ donation for our daughter, Layla’s, organs to be useful to someone else. It is a complicated process for a family to pursue, and we were the first family our care team knew that chose donation. They had monthly meetings at our hospital about us including NICU nurses and doctors, L&D doctors and nurses, palliative care, and the donation team. Layla qualified to donate organs to research: her pancreas for research on insulin to help diabetics, her heart to study cardiac diseases, kidneys to study kidney diseases and lungs to research complications of preterm deliveries.

Ultimately, she was also stillborn at 36 weeks and 5 days, one week before I was set to be induced. I was devastated that I wouldn’t get to hold her alive or donate her organs. This time, we set everything up during my pregnancy, so we didn’t have to worry about it in the hospital. We had a good friend taking pictures, we set up the funeral arrangements and childcare for our kids. We received some beautiful pictures of our family that I will always treasure. Even through our grief, we were able to extend Layla’s legacy past the pregnancy and birth. We donated two Cuddle Cots to a hospital in our hometown that is now used for multiple families after the passing of their children. I have been able to share their stories with multiple people and in multiple platforms. I am working with the palliative care team on making a resource and hospital packing list for families like mine. I also can help guide other families in the pursuit of donation by creating a protocol for my clinic. I am a better sonographer because of my daughters and my experiences carrying and losing them. Their legacy is me.”

This story was submitted to Love What Matters by Rebecca Shrader. You can follow her journey on her blog and Instagram. Submit your story here, and be sure to subscribe to our best love stories here. 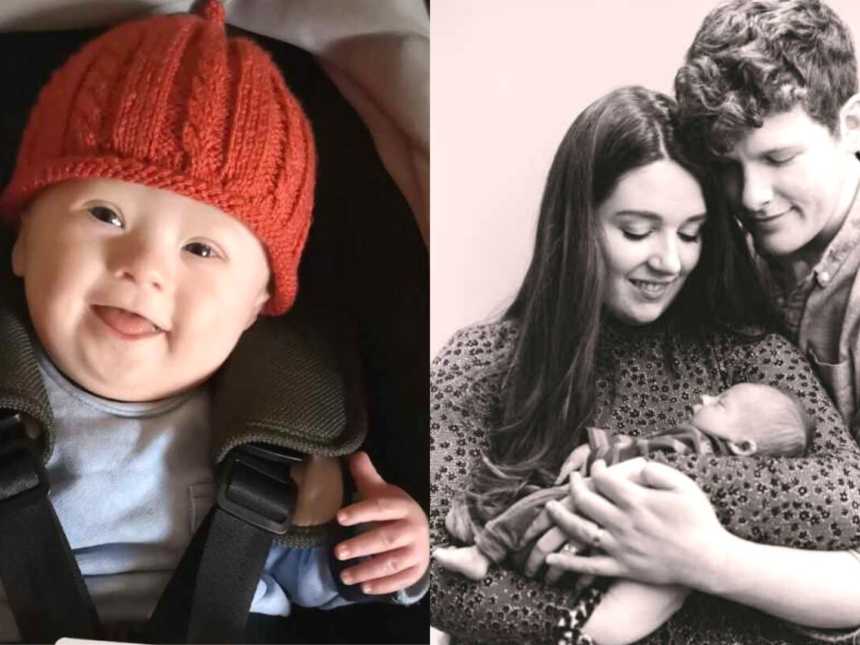 “She took him into her arms. ‘It’s not an ‘I’m sorry.’ It’s just different.’ I loved him, but I was scared. She helped us see he was the same beautiful baby we were elated with mere minutes before.”