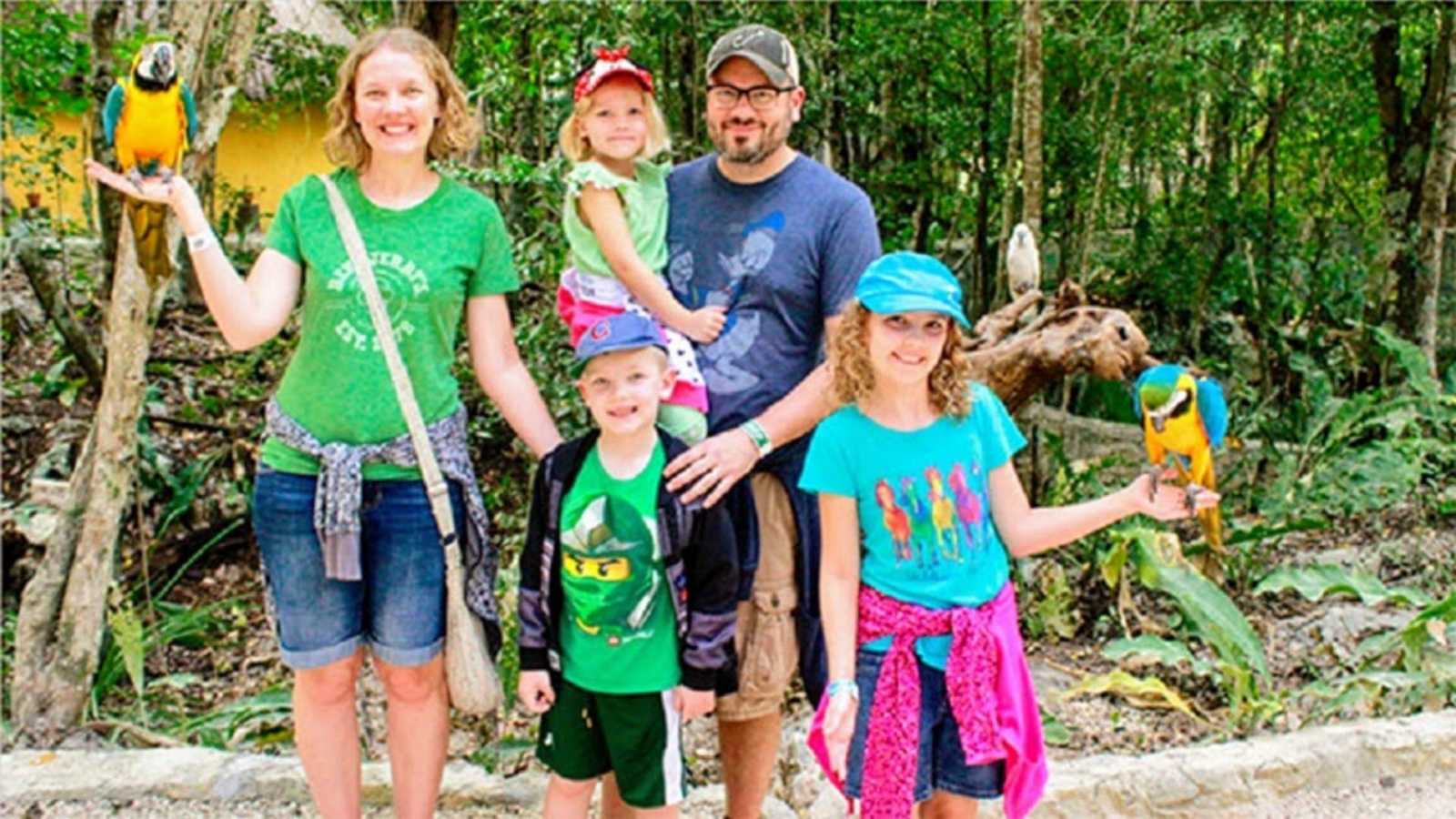 “After months of anticipation about our family’s first trip to Mexico and an escape from the Wisconsin winter, the weather report turned foreboding. All eight days were calling for rain. Kim and I were crushed. Our family had finally recovered from a three-week battle with the flu over the holidays, and we were looking forward to the time away to recharge in the sun and surf. Kim was especially fretful about the forecast of rain, incessantly checking the weather app on her phone.

On the plane, I read a section in a devotional about God being a ‘living God.’ That struck me. I grew up thinking of God as some far-off historical figure who did a lot of neat things in olden times, forgetting that He lives in the present tense, active in the here and now.

In that moment, I felt totally at peace. Did I expect God to alter a weather system on account of li’l old us? To be honest, I guess I hoped He would, but more than that, I knew the only way to really ruin the vacation was to spend all our time worried and anxious over the weather report. Even if it rained the whole trip, we would still have an opportunity to be together and to rest, away from the hustle and bustle of our daily lives.

We did pray for sunshine, but we also prayed for peace to melt away our fears and for the perspective to make the best of whatever each day would bring.

No one knows with certainty what next year, next week, or even what tomorrow will bring. (Not me, not you, and certainly not weather forecasters!) But too often in life, we allow doubt and anxiety to dominate our perspective, and we live out our fears in advance. I knew God knew how big of a deal this trip was to us, and He would give us what we needed from it, even if it didn’t look exactly how we imagined it.

So, here’s what happened. Every single evening, the weather app on our phones indicated storms for the next day. And every single day, we woke up to sunny skies, while the thundercloud icon had vanished. The only rain we experienced was about a half-hour’s worth on our last day, and it came as a welcome relief during a hot walk at the Tulum ruins.

The abundant sunshine became a symbol to us of God’s goodness. As the trip was coming to an end, we searched for a sunshine-themed souvenir to bring home with us, something to remind ourselves of what felt like a mini-miracle and God’s active presence in our lives. We never did find anything just right.

We arrived home at about midnight. Our youngest child was asleep as we pulled into our driveway. A few police officers were canvassing the street with flashlights, clearly looking for something. We didn’t think much of it, figuring the neighbor kid was in trouble again.

As our tired bodies, carrying overfilled suitcases, stumbled into the house, our oldest daughter said, ‘Hey, what’s that on the ceiling?’ I looked up and saw a gash in the drywall. The directional groove led my eye to the window, which had a bullet hole in it.

‘Kim,’ I said, ‘Hurry, go tell the cops we have a bullet hole in our window!’

The rest of the evening was a blur. We found small bits of glass all over the carpet and on the piano across the room. The officers pulled a bullet fragment from the ceiling, but it was too mangled to be of any use. They had very little information for us, except for the reports from neighbors, who had heard multiple gunshots and a speeding car with a bad muffler. At first, I was annoyed I had to postpone the date with my bed to deal with this after having had an awesome vacation, but eventually, it hit me. ‘Wait. What if we had been home? This could have hit one of my kids.’

The mood quickly turned from annoyance to anger and fear.

None of us got much sleep that night. (Except Ginny, who was already asleep and would ask about that taped-up cardboard patch on our window two whole days later.)

The next morning, our six-year-old son, Ben, brought a bullet to Kim that he found in the hallway. ‘Momma, what’s this?’ he asked.

Another call to the police.

The next few weeks were a blur of logistics and emotion. Assurances from the police that our neighborhood was historically among the safest in the city didn’t seem to help. Calls to the insurance company and various vendors about replacing the window and fixing the damaged ceiling were interspersed with the feeling of being violated and wondering if we were still in danger. I’d never seen my wife cry so much in all of our eighteen years of marriage.

We heard stories from neighbors who’d been home. Three young girls next door were in the front room watching TV when the shooting happened. An elderly neighbor across the street told us the gunshots were so loud she thought her house was the one under attack. A young mother in the home next to hers was nursing her two-month-old in her front room. She hit the deck when the shots rang out. Everyone was shaken. For days, we saw cars slow down in front of our house to gawk at the scene of the crime.

Eventually, amidst the haze of fear and confusion, we began to notice where God had been working in the situation.

We realized our house was the only one on the whole block that was empty when the shooting occurred. We figured out that it wouldn’t have been had we not been held up in Minneapolis so our plane could be de-iced. We felt His presence in the neighborhood meeting that was organized two days after the incident. Over fifty people crammed into a basement owned by a former police officer, bonding together to comfort one another and talk about practical ways to protect our neighborhood. It was neat to see connections get made and friendships deepen.

Finally, Kim and I got to a place where we could ask, ‘What does this terrible event make possible?’

Years earlier, we had stayed in a vacation home in Santa Barbara that featured some stained-glass windows. We’d always been smitten by their charm, so we wondered if we could replace the broken front window in our living room with a stained-glass work of art. The fact that the window in question was a decorative half-circle above the normal windows made it a perfect candidate. Maybe I could even design it. And maybe it would give hope to the rest of the neighborhood. We knew immediately what the design had to be.

We got connected with Rick Findora, who just so happened to be the guy who did the stained glass windows at our church, and I gave him a sketch.

We got our sunshine souvenir after all — after we returned home and in a form we never anticipated. It now serves as a beacon of hope to the entire neighborhood.

We live in a dark world, where tragedy and pain are all too common. Sometimes vacations do get rained out. Sometimes bullets don’t miss. But I believe this: God is a living God. He gives us small signs — signs that don’t seem like much in the grand scheme of things — just to let us know He is there. I think the reason He does this is so that when the bad things happen, we’ll remember He is still there, ready to bring good things out of terrible circumstances. He gives us the sunny days to recharge us, to fill our reserves with the hope that lights the way during the dark times, reminding us the sun will shine again.

It’s worth remembering that even on the darkest, cloudiest days, the sun doesn’t disappear. It’s still there; it’s just hidden. The people who see silver linings are the ones who look for them. If you are in a dark season right now, keep looking for the light. It’s coming.

Finally, I believe we are called to be a light for others. We do this by sharing our gifts and by being kind. When it comes to people who disagree with us, instead of calling them names, we can call them up for coffee. The smallest things can make the biggest difference. Our happiness increases when we help others, shining our own lights outward.

In the battle between light and darkness, the darkness doesn’t stand a chance.

This story was submitted to Love What Matters by Jason Kotecki. You can follow him on his blog. Do you have a similar experience? We’d like to hear your important journey. Submit your own story here, and subscribe to our best stories in our free newsletter here.

‘Ma’am I don’t know if they informed you, but we’re sending detectives now.’ He looked at me and said, ‘Michael did not make it.’: Woman loses partner to active shooter

‘I just want to stand by dad,’ I told her. This feeling came over me. For a second, I thought it was a joke’: Daughter’s eerie intuition about dad’s untimely death

‘My principal emailed me. She added another student to my roster. ‘But come talk to me when you get a chance. I have to tell you her story.’ Rewind 7 years.’: Teacher remembers every student ‘has a story’ and they just might ‘change you’

‘I jostled awake to the sensation of the couch moving. ‘PLEASE!!’ His eyes rolled back. I watched as Kenny’s body flailed uncontrollably.’: Woman finds love after losing husband to cancer

“My sobbing husband pulled me close and choked out, ‘Don’t EVER let me be a vegetable. Do you hear me???’ The weight of his words shattered my shock. My face crumbled. ‘It’s recommended you never procreate again.’ We’d accidentally gotten pregnant the last month it would ever be possible.”

‘I took a test, saw a line. ‘What’s ONE more?’ he laughed. I already had 3 under 3.’: Couple surprised by pregnancy while adopting brothers, ‘It’s exactly what I dreamed’

“’Meet your son.’ Weeks later, we brought number 3 home. I noticed I was having mood swings. I joked to my girlfriends on a group text, ‘I‘m probably pregnant.’” 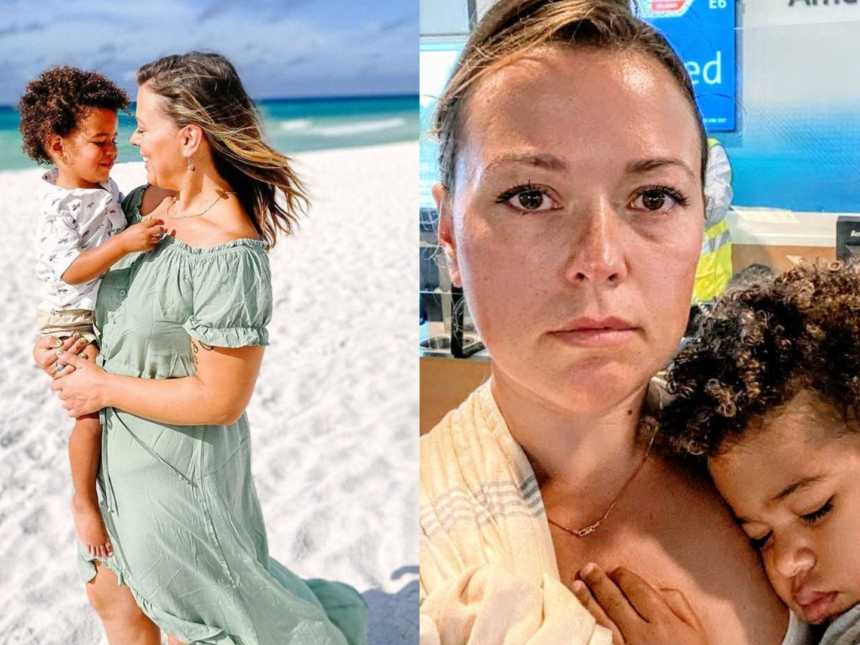 ‘He must wear a mask or you’ll both be asked to leave the aircraft.’ I repeatedly begged, bribed, and pleaded with him.’: Mom in tears after forced off plane, ‘This is not a mask debate’

“This is the face of a mama-bear who just bawled her eyes out as she was forced off an airplane because her overtired 2-year-old wouldn’t keep his mask securely over his nose and mouth at all times.”