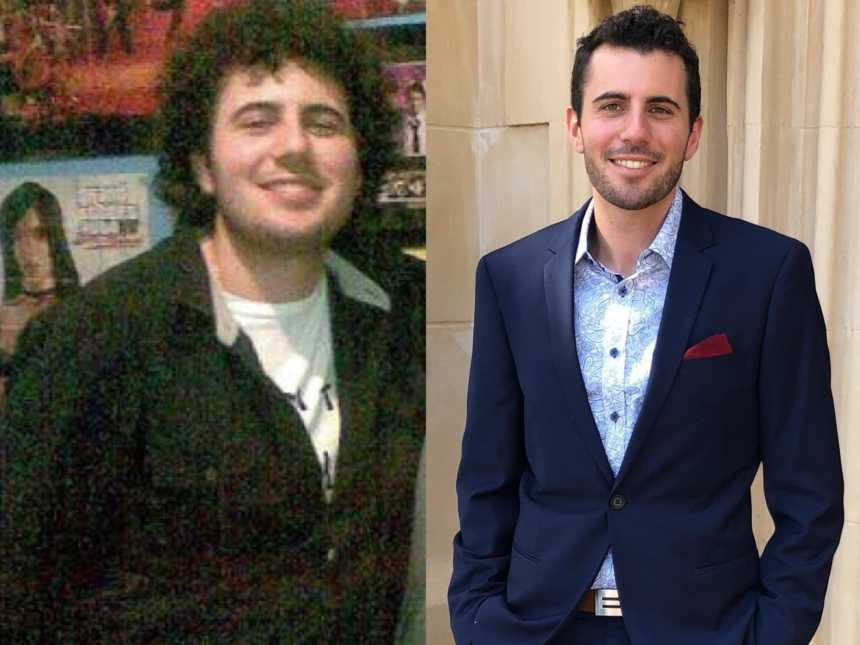 “I grew up in a home where eating was encouraged. Where as long as you weren’t too skinny, you were healthy. The reality was that I was a fat kid. A very fat kid. While my parents were not the most informed when it came to healthy dieting and physical activities were never encouraged, they were also insistent that I just had a bit of ‘puppy fat’ I’d grow out of. This was in stark contrast to the bullying I received throughout school regarding my weight. I also never simply grew out of that supposed puppy fat.

I remember a specific moment in my life when I was 20 and I went clothes shopping. I tried on a top and was absolutely revolted. In that moment I thought to myself ‘enough is enough.’ My weight had held me back up from so much in my life and destroyed my self worth and confidence. I was 242 pounds, I had never kissed a girl, I was too scared to meet people out of fear of what they’d think of me, I refused to look at photos that I was in because every time I did I felt disgusted. It was time to make a change.

I began my journey and joined a gym. Because I was so embarrassed and self conscious I refused to go during the day and would only go between 11 p.m. and 6 a.m. in order to reduce the likelihood of being seen by people. It was hard to lose the weight, I still wasn’t on a healthy diet but I persisted. Over about two years I managed to lose a lot of the weight but I could never get rid of that last bit of fat.

‘I was fed up’: Mom loses jaw-dropping 205 pounds for her ‘beautiful rainbow baby’

Over the next few years, my life was filled with a series of ups and downs and this was reflected in my weight. I had gained a considerable amount of the weight back and struggled to find the motivation to work on getting into shape.

However, over that same time I did do a lot of learning and growing. I learned that if I just cut down my calories and burned the fat it wouldn’t make me happy. What I needed to do was to have a solid balance of a nutritious diet and decent workout routine. This is obviously no secret nor is it some unique trick, but it is definitely something I lacked the first time around. I originally had lost a lot of weight but had no muscle development. What I learned is challenging however is finding something that works and remaining persistent.

Towards the end of last year, I began to make gradual changes to my diet and began doing some low intensity workouts. I believe that this was key to finally getting on the right track. From my previous experiences and those I’ve heard from friends when you have a sudden massive change in your diet or exercise it tends not to last long. Over the last few months, my workouts have become gradually more intense and my diet has become massively improved.

As of today, my diet primarily consists primarily of various dishes comprised of lean meats, vegetables and nuts. I found this has worked best for me in terms of strengthening muscles and burning fat. Being of Italian origin, it’s hard to sometimes avoid carbohydrate based dishes and on the odd occasion I do treat myself, but I found this was important for my mental health too. As long as I balanced it out and with the rest of my intake and monitored my caloric intake it worked out fine.

I also learned to accept that for some people ‘looking good’ just comes far more naturally to some than others. I realise that if I wanted to look good I’d have to put in the effort beyond just diet and exercise. I went through many different haircuts and facial hair over the years trying to find what worked for me. I also began to put a lot more effort into clothes shopping, and although most attempts still tend to be more unsuccessful than successful, they were all learning experiences which I took on in the future.

Over the last few weeks, for the first time in my life, I have finally felt somewhat happy about the way I look. I had an upcoming wedding to attend and thought to myself, ‘here’s my opportunity.’ I went up and down town one evening looking at suits, after a few hours I settled on one, had it custom fitted and on the day I asked for a photo of myself. For the first time ever, I had uploaded a full body picture of myself that I actually liked onto social media. After so many years, I’m finally starting to feel a sense of self worth and confidence unlike anything I have ever felt before.

Personally, I still feel like I have a long way to go but I finally feel like I’m on the right track and that my hard work is paying off. I have to give thanks to some of my closest friends who have given me some great ideas, motivation and inspiration to help me find what worked for me. The same also has to be said for r/progresspics. I would go on to that sub Reddit nearly every night to help guide and inspire me and find new things that could help improve my lifestyle. Thank you all so much for helping me become the person I am now.”

This story was submitted to Love What Matters by Carmine D’Amico, 26, of South Australia.

“I didn’t understand why people were screaming at the top of their lungs that abortion is healthcare, but now I do.”