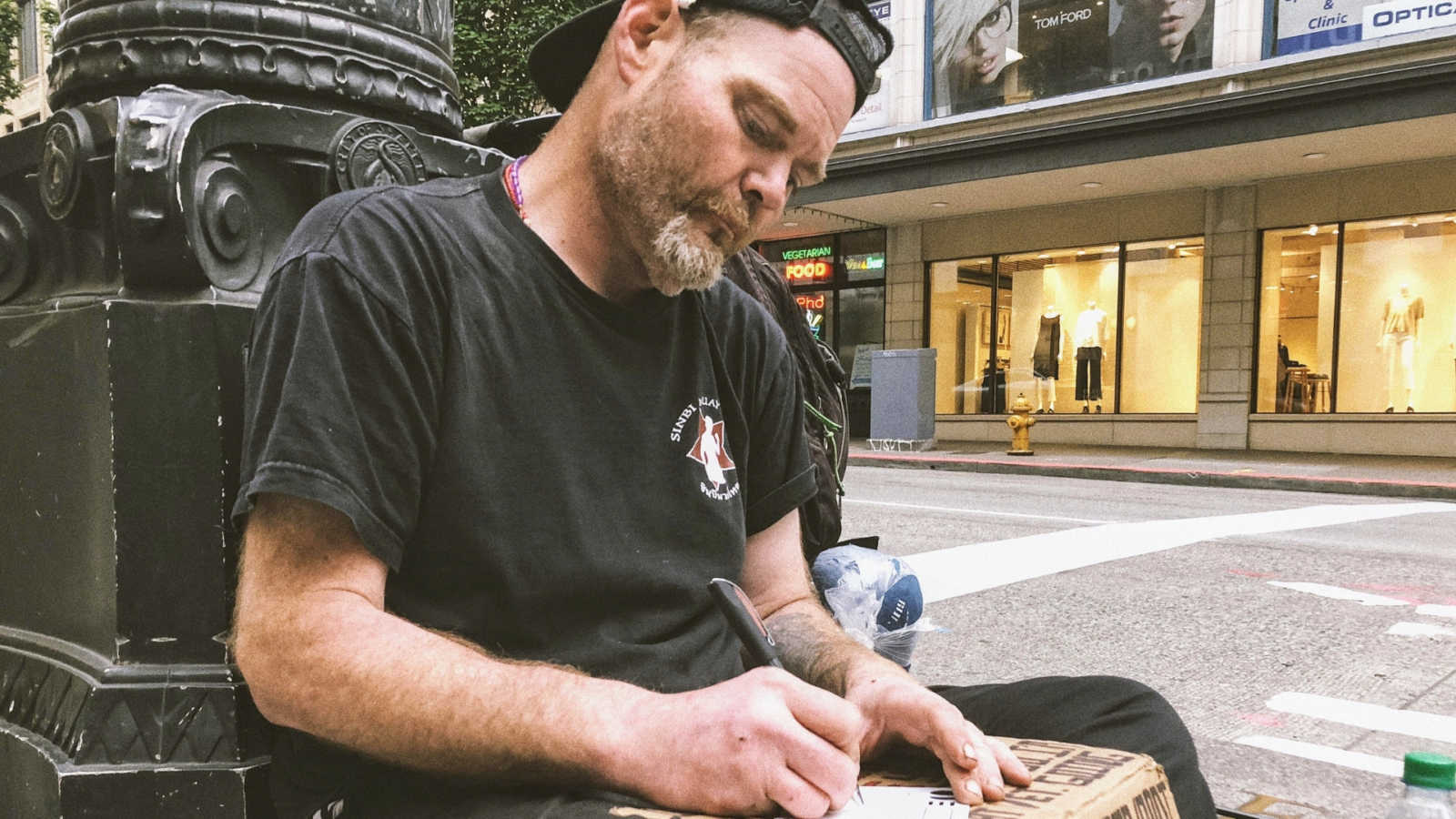 “Moreik happened to be sitting on a street corner against a light post. I have a hard time passing homeless people without giving them at least the 20 cents jingling in my pocket, but in Seattle… if I stopped for every person along the way, I’d be stuck on that corner too. But Moreik’s sign caught my attention. It read ‘I don’t care who you are, I love you…’ and then proceeded to state what he needed from the passerby.

I stood there for an uncomfortably long moment reading and rereading his sign until he finally said, ‘Hi’. I proceeded to tell him that his sign was interesting to me and asked him what he really needed. He replied, ‘A million dollars, the cure for cancer, a cure for diabetes, and a cottage in Maine.’

I cocked my head to the side and sighed saying that unfortunately I couldn’t provide him with any of those things and asked him once more what he really needed. ‘I need $6 for a bus ticket to get home.’ When I asked him where home was, he described an underpass at an intersection of two streets. So, I sat down crisscross apple sauce to ask this man what his story was and why he was on this corner…

‘I just had a couple of bad breaks in a row.’

Moreik has a degree in mechanical engineering and is a Navy vet who used to work on explosives. One evening he came home to find his wife being unfaithful, ultimately leading to an expensive divorce. Two weeks later, he was diagnosed with gastrointestinal cancer. Oh, and he also has diabetes, turrets, and struggles with anger. I asked him what brought him joy, and he laughed and shook his head. I asked again if there was anything left that brought him joy, and he said, ‘you two bring me joy. The fact that you stopped and sat down to actually ask me about my life—that doesn’t happen. Nobody cares about people like me. To most people, I am a lazy, crazy, drunk. In fact, you should see the facial expressions of people walking by and judging you both for sitting here with me.’

He wrote down one word:

EVERYONE MATTERS. You matter. He matters. She matters. They or whatever pronoun you use…matters. We all matter regardless of the religion you believe in, skin color you have, sexual partner you choose, clothes you wear, music you listen to, food you like, or whether you’re making six figures or collecting change in a paper cup. Everyone has a story that deserves to be told and heard… all we have to do is care enough to ask.”

This story was submitted to Love What Matters by Shelby Spear of finding Grace in the mishmash. Submit your story here, and subscribe to our best love stories here.