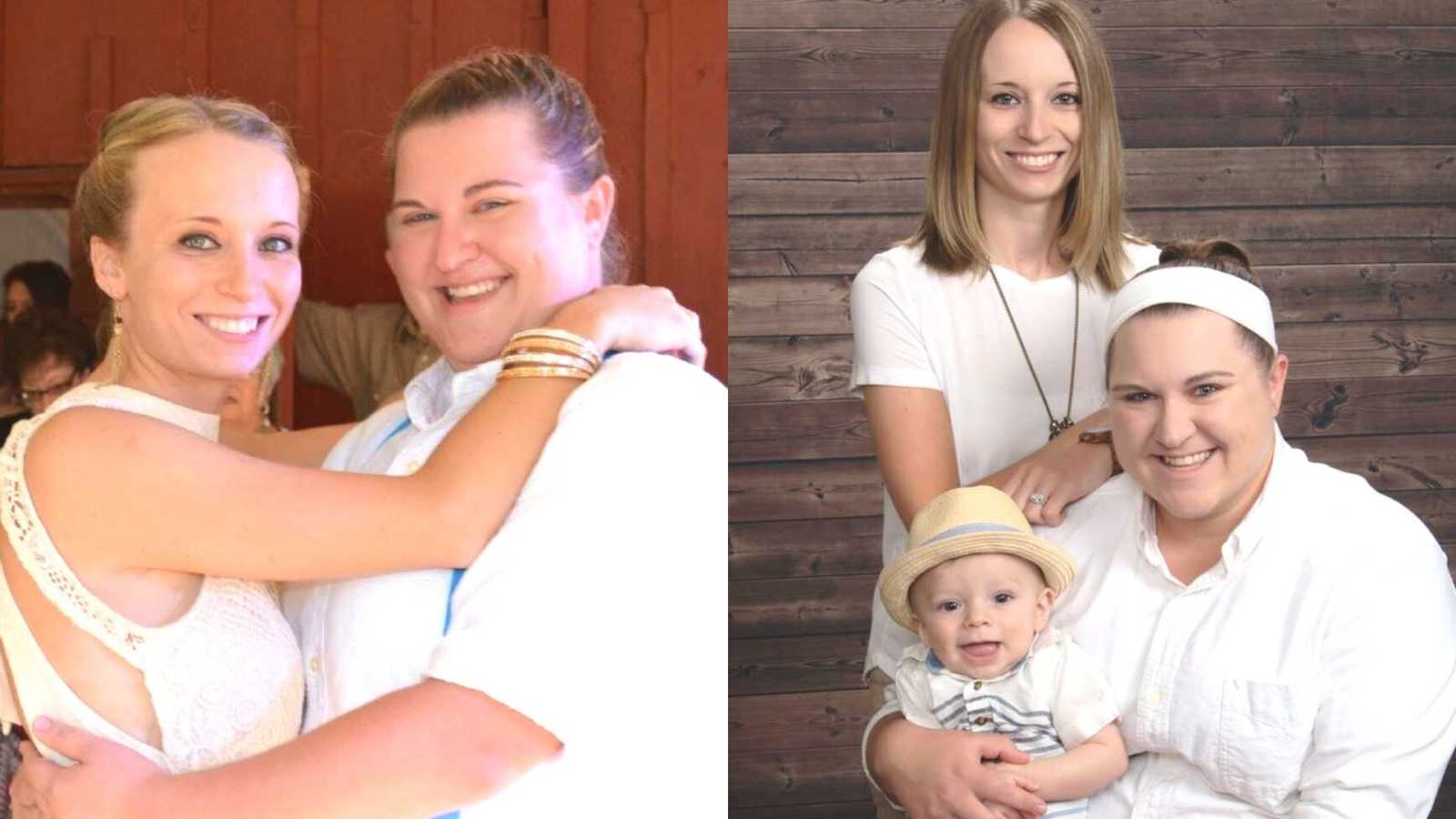 “My entire life, I had always known I would someday adopt a child. I can’t quite say why I knew this, but it was just a feeling I had rooted deep down inside. I had told my family for years this was going to happen. I don’t think reality hit for me, my wife at the time, and our families until a 19-year-old girl messaged me on Facebook and said, ‘From the moment I saw you, I knew you were meant to be his moms.’

Let me back this story up a bit and tell you about the very rocky road that led us to our son. It wasn’t all rainbows and butterflies; it was more like one minute being on top of the highest mountain, and the next minute being shoved off it with so much force the wind is knocked right out of you.

Kylie and I met working at a local hospital. She was a nurse and I was a respiratory therapist working the nightshift. Things just clicked for us and before you know it, we were married. We knew early on we wanted a family and we had discussed the many options now available for same sex couples. Ultimately, we chose to try the adoption route.

I began doing research on LGBTQ-friendly adoption agencies, foster to adopt programs and private agencies. We eventually found an agency out of California who marketed especially towards the LGBTQ community. Their website looked great! The profiles of couples hoping to adopt were very professional and the success stories gave us so much hope. We took out huge loans totaling over $16,000 and quickly signed up. The agency made our professional profile and began to ‘market’ us.

Within a month, we had someone who wanted to talk to us. We were ECSTATIC! We could not believe someone wanted to get to know us so quickly and possibly choose us to raise their child!  So we began talking right away. The potential birthmother was in her lower 30s, a single woman living in Indianapolis, who wasn’t in a good place to raise a child on her own. She ultimately told us she chose us to be the parents of her child, and even informed us it was a girl! She sent us ultrasound photos, doctor appointment information and the expected due date. Our minds were in overdrive with excitement, nerves and every other emotion imaginable. We began buying a few baby essentials such as car seats, strollers, the cutest baby girl outfits and more.

Pretty soon it was time to start looking into hotels and flights for our trip to Indianapolis for the arrival of our daughter. I was at work one day, on the phone with a Holiday Inn, when I had an odd feeling of, ‘hmm, maybe I should do a little detective work of my own just to confirm all of this is true.’ (Ask my friends; if they need information on a new love interest, I’m the one to come to. I can find out anything with a few quick internet searches.) After hanging up with the hotel, I downloaded an app called Been Verified. They have an option for reverse phone number look up. So I entered the ‘birthmother’s’ phone number and was confused when it came back to a name other than what we had been calling her. I went ahead and searched this name and found a Facebook profile for a girl in Indianapolis that looked nothing like the photos we had been sent. At this point, I would be lying if I didn’t say I was getting very worked up. Were we being lied to for the past 3 months?! No way. No one would do that! I had to find out the truth right now. The due date was less than a month away!

I did some of my famous Facebook creeping and found a relative of this ‘birthmother.’ I had nothing to lose at this point, already fearing there was no baby, so I sent this man a message. To my surprise, he immediately responded and asked me to call him! I was literally shaking with fear, anxiety and dread at this point. I dialed the phone from the break room in the hospital where I worked. The man answered.

‘My wife and I have been talking to your family member for a few months, and we’re about to adopt her daughter that is coming soon,’ I frantically told him.

He fell silent. When he spoke again, his voice was a mix between anger and sympathy.

‘I’m sorry to be the one to tell you this,’ he said, ‘but she is not pregnant. I just saw her at a family gathering last week.’

He went on to tell me that she had, in fact, lost a child in a tragic way a few years earlier and had been scamming hopeful adoptive parents in this manner ever since her loss. I thanked the man on the phone and hung up. I felt instantly sick to my stomach. With shaking hands, I immediately called my wife.

I told Kylie what I had found out and we were beyond upset. Our families were devastated, and we had lost all hope. How can someone lie about something as serious as this? And for what reason? This girl never got a dime from us or the adoption agency. What was her motive? Boredom? Just something to do for fun? Most likely some form of mental illness? It made no sense. It never will.

We were so angry with both the ‘birthmother’ and the adoption agency who we had paid thousands and thousands of dollars to for not even getting a confirmation of pregnancy. We put a lot of the blame on ourselves as well, but we didn’t know anyone who had ever adopted, we didn’t know how any of it worked. We were so excited and hopeful; we didn’t want to mess it up by questioning the agency and ‘birthmother.’

Fast forward to today and we have an amazing 18-month-old son named Carson. After the fiasco with the adoption agency, I thought, ‘What the heck, I’m going to try on my own!’ I made a simple Facebook page and posted information about Kylie and I, photos of us and our families and asked everyone we knew to share the page. Two weeks later we were contacted by a 19-year-old in New Mexico. She had commented on a photo of Kylie and I: ‘Hey, message me, it’s important.’

Immediately my heart skipped a beat – could this be good? I sent her a message and we talked back and forth for the rest of the day. She asked me to call her that evening and I dialed as quickly as possible. She said, ‘Hey! As soon as I saw your faces, I knew you were meant to be his moms.’ His?! So it’s a boy? Now I was getting so excited! The next day, she FaceTimed us from a doctor appointment and we got to see the ultrasound live. From there, everything just fell into place perfectly. She chose us to be his moms, and our son was born in January 2018.

Although we are so lucky to have Carson in our lives, the stress from the past few years with the adoption took an enormous toll on our relationship. Kylie and I are no longer together, but we continue to co-parent our amazing son. We truly have been on the top of that mountain and we have also been shoved off quite a few times. Carson will always be the reason we continue to climb back up the mountain. We are so thankful for the difficult journey that led us to him.

And the old saying that ‘everything happens for a reason?’ I could not agree more. I have no idea what life has in store for me in the future, but I do know that I was lucky enough to get to be Carson’s mom. That will always be the highlight of my life.”

This story was submitted to Love What Matters by Alexis Knowlton of Wheeling, West Virginia. You can follow her journey on Instagram. Do you have a similar experience? We’d like to hear your important journey. Submit your own story here. Be sure to subscribe to our free email newsletter for our best stories, and YouTube for our best videos.

Read another family’s harrowing story in the throes of an adoption scam: