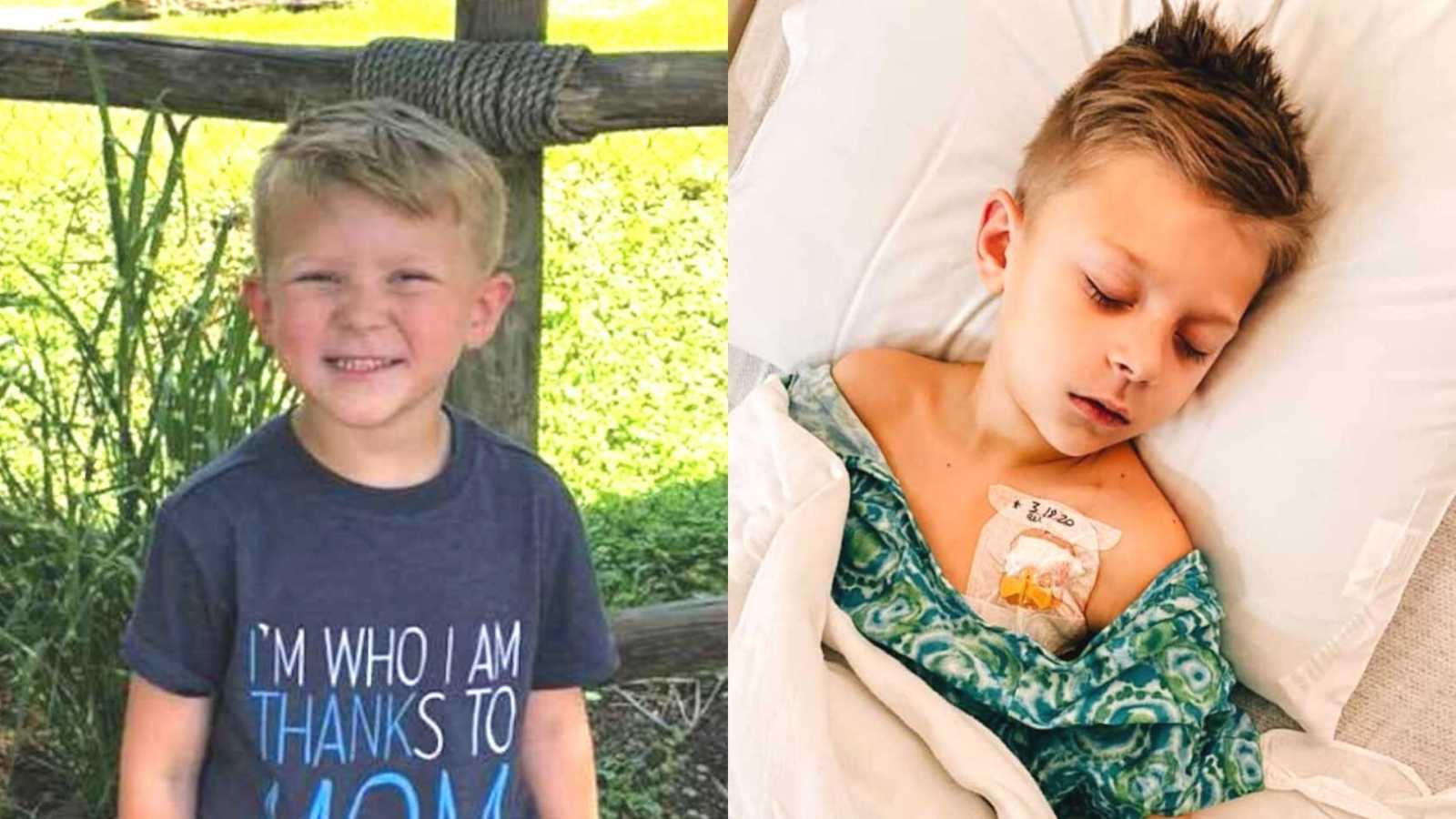 “POSITIVE. That was the test result that changed my life. I gave birth to my first son, Cooper, in January of 2013. I wasn’t prepared to have a baby, but the moment I saw his little body bouncing on the ultrasound screen, I knew he would change my life. I became a single mom at 21 and while it was a struggle, Cooper made my life worth living. He was the perfect little baby, so sweet and so smart. Although I had no idea what I was doing, he made it so easy. From the beginning, he made everyone around him laugh and was always healthy and happy. In the first 5 years of his life, he hit almost every milestone perfectly and we only visited the doctor’s office for annual checkups. When preschool started in 2017, Cooper found himself at his pediatrician’s office multiple times throughout the fall and winter season due to colds and the flu.

Kindergarten started and again, Cooper found himself visiting his pediatrician multiple times before Christmas. When first grade started, my husband and I knew what to expect. We handled the situation as we had the past two years, but Cooper didn’t seem to be fighting off the viruses like he normally would. Between Thanksgiving and New Year’s, he had been diagnosed with strep, pneumonia, the flu, strep for a second time, and bronchitis.

In February 2020, he had his yearly checkup and I talked to his doctor about how I was feeling. His teacher had mentioned during the school day, Cooper had started wearing his winter coat throughout the day and he complained he was cold daily. After discussing these concerns with his doctor, she assured us first graders don’t have the best hygiene or respect for others’ personal space, and sometimes they just do weird things we don’t understand, but he looked completely healthy. We started implementing more hygiene habits and hoped with spring on the horizon, Cooper wouldn’t be as cold. Looking back now, I believe Cooper’s body was trying to warn us something was wrong.

A month later, on Thursday night in March after a bath, I noticed Cooper had some swelling on his privates. He had not done anything out of the ordinary that day, but in my gut, I had a bad feeling something just wasn’t right. Friday afternoon, I picked him up early from school and took him to his pediatrician to get it looked at. His pediatrician suspected it was a scrotal hernia and after an ultrasound, he was diagnosed with a hydrocele (swelling in the scrotum that occurs when fluid collects in the thin sheath surrounding a testicle). His doctor ordered a urine test and prescribed him antibiotics. He was visiting Louisville for a weekend at his Dad’s, so his doctor and I had his dad take him to Norton Children’s Hospital Brownsboro for the urine test. They decided to do another ultrasound there to double-check his pediatrician’s diagnosis. That ultrasound showed there was indeed a hydrocele, but there was also a mass wrapped around his testicle. They immediately sent him to the larger Norton Children’s Hospital in downtown Louisville to meet with a urologist. My husband and I loaded up our car and made the two-hour drive from our home in Bowling Green.

We had made that trip several times, but this trip was different. I knew Cooper would need me to be in a healthy mental state given the situation. I gave myself 30 miles to think of all the worst things possible and all of the reasons why the doctors wanted the additional tests. Cooper has always been extremely observant, so I knew I needed to be strong for him, but I also knew what might be waiting for us ahead. We got settled into our hospital room for the night and first thing Sunday morning, Cooper went in for his first surgery. Cooper’s dad, stepmom, and my husband and myself sat alone in that waiting room for what felt like days.

The surgeon walked into the waiting room in his cowboy boots and sat down on the bench between us all and started talking to us about the surgery. ‘We successfully removed the tumor and the testicle it was wrapped around. I was able to remove it all with no problems. I sat down with pathology and although their final report isn’t back, it looks like your son has a CANCER called Rhabdomyosarcoma.’ My brain did not hear much after that. He walked away and we all sat in silence. What do you say in that moment? How did this happen? We went back to our room and spent time cuddling our baby, soaking in the news, and googling his diagnosis.

Monday morning, his oncologist asked his dad and I to step out in the hallway. At that moment, I knew she was going to confirm what we were told the morning before. I had spent the evening hoping by some grace of God the surgeon was wrong. The technician who read his first ultrasound was wrong. Mistakes could happen. There’s no way my perfectly healthy son has cancer. ‘Your son does have cancer, it’s rare, but you caught it early. We’re confident this aggressive treatment plan we’ve come up with will work.’ Those words confirmed my worst fear.

I thought that would be the hardest moment in this journey. Oh boy, how wrong I was. Figuring out how to tell your seven-year-old that he has cancer was hard. As a parent, you want to do anything to protect your child and to take away their pain, but I couldn’t do that.

Watching him go back for another surgery to have his port placed and a bone marrow aspiration was hard. Crying with him as he screamed while he got his port accessed those first few weeks was hard. Watching him get upset about losing his hair was hard. Listening to him whisper, ‘I never want to leave you. I don’t want to die. I wish I didn’t have cancer,’ as tears ran down his face while he held his little brother’s hand was gut-wrenching. Knowing his little mind had to think about what would happen if he didn’t win this battle was absolutely heartbreaking.

We are four months into Cooper’s six-month treatment plan and he has 6 more weeks of Chemotherapy scheduled. Most days, you wouldn’t be able to tell he’s fighting for his life, minus his lack of hair. He is always trying to prank someone or practice his baseball skills in the backyard. He spends a lot of time making plans for the fall after treatment is over. He can’t wait to visit the beach and play on his basketball and baseball team with his friends.

I would be lying if I said it was all rainbows and butterflies though. He has bad days sometimes, but we were warned he’d have a lot of those. The chemotherapy he receives is intense. It can make him sick and some days he just doesn’t want to get out of bed. This journey has been a nightmare and no child should have to go through what he has endured, but he is here. He is fighting. He is winning. Our family has grown so much stronger because of this.

In a few months, his hair will grow back, his port will be taken out, and he’ll go back to doing things ‘normal’ 7-year-old’s do. He has a story not many of his friends can relate to, but he is a force to be reckoned with.

During this journey, I have found strength in myself I never knew I had. I’ve seen Cooper grow in many aspects and face something that is so scary with a brave face and the desire to win. I learned to trust myself and listen to my gut feeling. I pray our story might inspire someone else to listen to themselves and ask more questions.”

This story was submitted to Love What Matters by Chelsea Brewer from Bowling Green, Kentucky. You can follow their journey on Instagram. Do you have a similar experience? We’d like to hear your important journey. Submit your own story here. Be sure to subscribe to our free email newsletter for our best stories, and YouTube for our best videos.