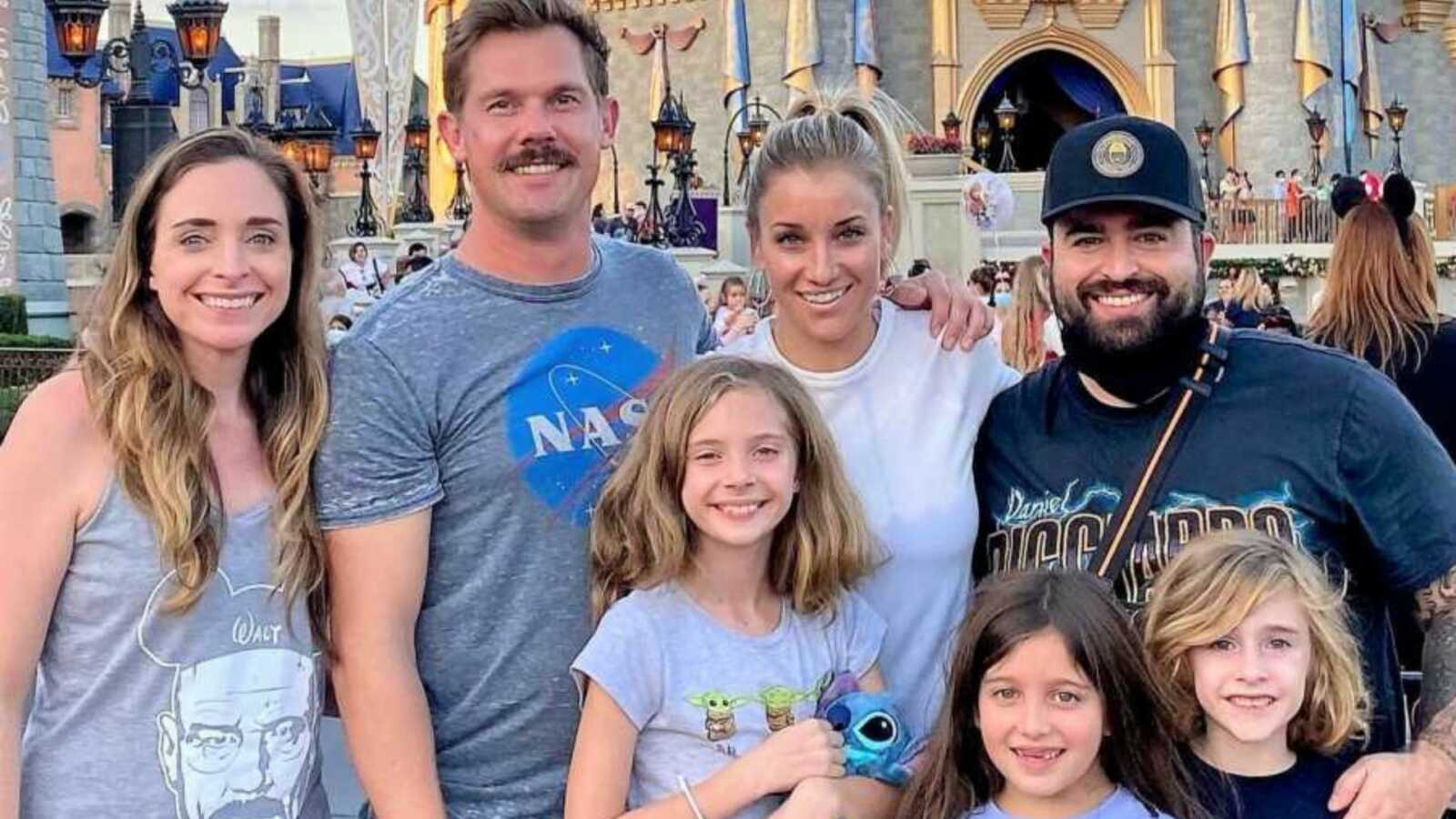 “My ex-husband and I are divorced, but we are still a family. The concept of a ‘divorced family’ seems like an oxymoron, but it’s how we have chosen to live our lives post-divorce. We were married for 11 years and have two amazing children. They were 3 and 5 at the time of our separation and just the thought of breaking up their perfect little world was enough to bring me to tears in the middle of the grocery store on more than one occasion.

The reason for our divorce was nothing that could be fixed. We couldn’t just spend more quality time together or do marriage counseling, though we tried. The reason behind our divorce was no easier to fix than willing my eye color to change. At 37 years old, I realized I was gay. That’s right. I didn’t know I was gay. I met my husband when I was 23. He had everything I was looking for in a long-term partner. He was smart, funny, kind, successful – and we had similar values and hopes for the future.

We hit it off quickly and a year and a half later, we were engaged. The day we married is still one of the best days of my life. The wedding was beautiful. I was so happy to be marrying my best friend. We were surrounded by our families and friends. I had exactly zero doubts leading into our marriage or throughout the entirety of our time together. We traveled, we grew in our careers, and we grew as people. The birth of each of our children brought more happiness and challenges, but we parented together well. I felt nothing could shake us.

Until the little realization about my own sexuality came knocking. You know the feeling when you drop the ball on a major project at work? I had an awful pit in my stomach for months as I worked through what this meant for my marriage, my children, and our future. This decision wasn’t just impacting me, it was impacting the people I love most. I wished the realization would go away. I wished it was just a phase. I wished I could go back in time and unrealize it. Or maybe I had a brain tumor. Anything but doing the impossible task of coming out.

I wrestled with the joyous feeling inside myself of finally knowing who I was–mixed with the extreme guilt and shame of not only getting divorced but admitting to the world I was gay. So how could you not know? You’re a grown woman with no mental impairment. And those kids didn’t just magically appear…Your sexuality is something inherently inside of you, so how could you go your entire life being with men and then suddenly switch teams? A little something called ‘internalized homophobia’ along with living in our heteronormative society.

I grew up in a suburb of Atlanta in the 80s and 90s–a time when being gay was just barely tolerated. It came with a stigma. The HIV/AIDS epidemic was rampant. It was a time when ‘Don’t Ask, Don’t Tell’ was considered a ‘progressive’ policy. Ellen came out and her career tanked for years. Matthew Shepard was beaten to death, solely because of his sexuality. Being gay meant being different. It meant being ousted–and it could even be deadly.

Gay marriage was a heavily debated topic in my 20s and early 30s. California banned it altogether in 2008. It wasn’t legalized on a federal level in the US until 2015. A year later, the little door in my brain slowly began to crack open. I can see now how I spent a lot of time in my life avoiding my own truths and numbing my feelings. Alcohol was an absolute necessity for intimacy throughout my marriage. It also helped me avoid processing my own feelings. It helped me to not think about how I felt a disconnect from myself and everyone in my life.

I was unconsciously hiding from myself–because I couldn’t face who the person I truly was. Coming out later in life comes with an additional emotional toll. The judgment from others you’ve somehow lied your way through life–putting on a mask as you performed in the heterosexual world. It took a lot of undoing. Letting go of the stigma surrounding me as a child and teenager, and releasing my own internalized homophobia that formed as a result of the stigma.

We are taught to put other people’s feelings ahead of our own. Don’t say or do anything that can hurt someone else – which is a good rule of thumb in many cases – except when it comes to ultimately sacrificing who you are. It breaks my heart that outside factors and the fear of judgment kept me from being me for so long. I knew I had a hard choice to make and this choice would have a domino effect on my entire life. But I had made choices based on other people’s opinions and feelings for far too long. I had to shift my way of thinking – from a ‘You’ mentality to a ‘Me’ mentality.

What a sad existence… to live your life with other people’s opinions at the helm. This was my life and no one else’s. It may sound selfish to some since I am a mother, but I disagree. My children deserve a happy, stable mother. They deserve a present mom who knows damn well who she is and who isn’t afraid to speak up for herself. My children also deserve a solid family. The moment I realized it was something I could still give them, despite the divorce, was the moment I knew we would all be okay. My children could still have their needs met because we would never not be a family.

As we moved forward with our separation, I talked to my husband about how our lives didn’t have to look like other divorced parents. He would see them far more frequently than the typical ‘every other weekend’ divorced dad. And just because we were divorced didn’t mean we couldn’t all spend time together. Our lives could look however we wanted. And that’s exactly what we’ve done for the past few years. We eat dinner together frequently. We attend parent/teacher conferences and soccer games together. We celebrate birthdays and holidays together. We dress up together for Halloween.

We also travel together. We recently took our children to Disney World – along with his girlfriend, her ex-husband, and their child. This is our party of seven. Because there is no rule book on family. There is no rule book on who we love or how we love them. I love my ex-husband. I am happy for him. He deserved better than the love I was capable of giving him. And I deserve to be my authentic self. I deserve to love who I want and feel comfortable in my own skin.

My kids deserve two whole, happy parents. Parents who despite no longer being married, can be friends and raise them together. I’m beyond grateful for our situation. It takes compromise. But we both know it’s what is best for our family. Our kids won’t remember every moment of their childhood, but they will remember their parents being happy, present, and enjoying life with them.”

This story was submitted to Love What Matters by Melisa Raney from Atlanta, GA. You can follow her journey on Instagram TikTok, her Podcast and website. Submit your own story here, and be sure to subscribe to our free email newsletter for our best stories, and YouTube for our best videos.

‘I was called ‘gay’ before I even knew what it meant. I have to be a strong papa to my girls. I can’t let them see I’m hurting.’ Gay father from deep south says he’s just like ‘any other family’, finds confidence after years of bullying

‘My partner announced, ‘I’m trans.’ It felt like the rug had been pulled out from under me.’: LGBT couple share beautifully complex love story