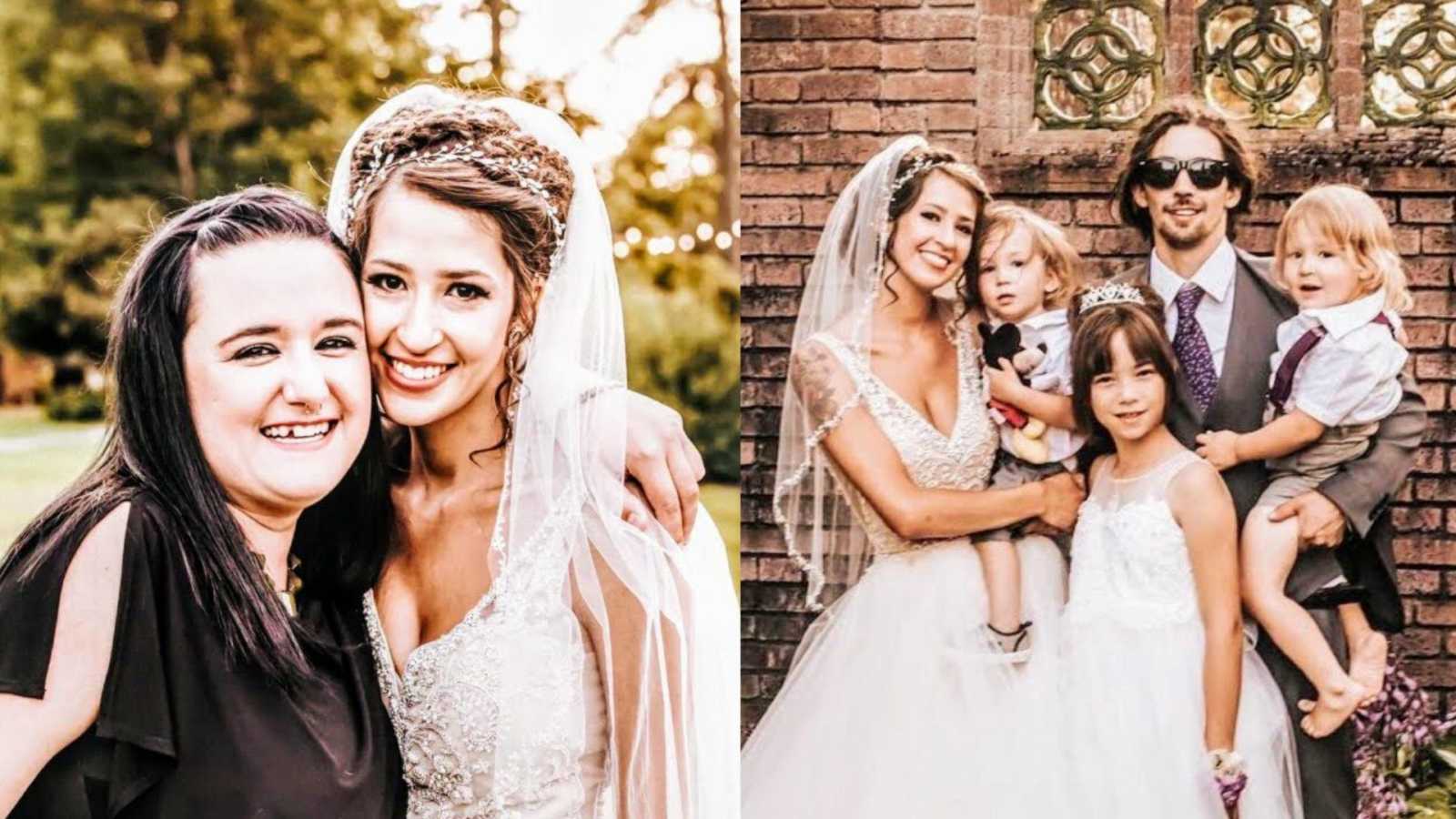 “Some may think it’s crazy, but I happily invited my husband’s ex-wife to my wedding.

It all started when my husband and I first met in spring 2010 in our high school horticulture class. At the time, I was a sophomore, and he a senior. We were both seeing other people at the time, and although I admired him – his knowledge about plants, his kind demeanor, those awesome dreadlocks – we had never spoken to each other. In fact, I have some pretty vivid memories of watching him and his girlfriend walking hand in hand at school, both with their dreadlocks, and her with a tiny but growing, pregnant belly. That is when I first met my husband’s now ex-wife, K.

Fast forward to New Year’s Eve, 2011. I had just gotten out of an abusive relationship. A boy I had met in high school was quite the charmer, but slowly he became more controlling, until he began stalking me and lashing out verbally and physically. I called it quits soon after seeing his true colors and I’m thankful I had. My friends and I went to a mutual friend’s get together to ring in the new year, and I just so happen to run into the cute, dreadlocked, horticulture boy.

I knew he had a daughter. In fact, him and K had invited me to their wedding, since we had all gone to high school together. I never attended because it had been my younger brother’s birthday party that day, but I wonder how things would have ended up had I gone. Anyways, my husband’s daughter, J,  had just turned 1 and started walking when I spotted him on New Year’s Eve.

He had also just recently separated from his daughter’s mom. We began talking over Facebook and on January 25th, 2012 he took me out on a date. I was so nervous for my parents to see me go with this guy who had long dreads and drove a Volkswagen Vanagon, much different than any other boyfriends I had had. But he came up to the door, introduced himself, and off we went on our first date.

For our first date, we went ice skating, shared some hot chocolate, and ended up sneaking into the last movie that was playing at the movie theater. When the movie ended, the mall closed, and we were still inside the theater – just us two! We talked, danced, did cartwheels in front of the big screen, and shared our first kiss. We didn’t end up leaving until about 4 a.m. After that magical first date, I knew he was the one.

In the beginning of our relationship, things were great. He and his wife were going to get a divorce, they shared their 1-year-old daughter, and him and I were having fun dating. Slowly, he introduced me to his daughter, and I fell in love again. It wasn’t until we took our first trip, us three, that I realized this wasn’t going to be easy. My step daughter’s mom seemed to hate me, and it really seemed she hated me having anything to do with her daughter. We were both young, immature, and I’m sure jealous. To be honest, I think I knew that my future husband and the mother of his daughter still shared a bond, and love between them, and it was a new and very threatening feeling to me. I remember feeling intensely jealous and insecure any time they did drop offs or pick ups for their daughter. Another part of me was jealous that I wasn’t J’s biological mother myself because I loved that child so much.

For those first few years of dating someone with a child, and someone going through a divorce, there was a lot of hurtful stuff said between this woman and I. I was worried I was going to lose this man and this child who became so important to me, wondering if I would ever be loved the same way or as much, all while just trying to navigate womanhood as I was only 17 when we first met.

Finally, in the spring of 2014, my husband’s ex-wife and I decided to meet up and talk. We met at a coffee shop and just spent time talking about J. In fact, my husband’s ex-wife had just had another baby at this time and brought the little baby with her. I remember she told me how much J talked about being with her dad and I, and I confessed to her that deep down, it was also a hard fact for me to accept that no matter how much I love this new child I was getting to know, she would never be mine biologically. And I’ve learned to accept that she doesn’t have to be mine biologically for us to have our own special bond. Although we had had some hiccups after that meeting and talk, I think that was the catalyst of our co-parenting relationship moving forward. Two women, coming together in vulnerability.

Since then, we have been there for J in all the ways a family should be. We celebrate birthdays together, holidays together, first days of school. We’ll both take her to dance lessons or we’ll all go together to drop her off at camp. And since that talk, I have become a birth mother myself. In 2015, I have birth to my first son. I believe that life-changing transformation has also made our relationship even stronger! Not only are we co-parents, we are mothers.

In our family, we share J, who has two little sisters on her mom’s side and two little brothers on mine and her dad’s side. In fact, K and I were pregnant at around the same time! We both had babies in 2017. When my youngest son was born prematurely at 33 weeks, K helped so much with picking J up early or keeping her longer so I could visit my son in the NICU. And when her daughter was born just 2 months later, I brought J to the hospital to meet her new baby sister. When my husband proposed to me, she celebrated with us. And on the day of the wedding, she came to our home early in the morning to pick up and watch my son’s while I got ready for the wedding! My boys love their big sissy, and they also love their big sissy’s sisters as well. In our family we aren’t ‘half’ or ‘step,’ we are just family.

I know not everyone has the ability to develop a friendship with the person or people they are co-parenting with, but I believe it is so important to try. J is 9 now, and she is the most beautiful, kind, funny, creative little girl. And I know both K and I (and my husband of course!) had a hand in her growing into the amazing young woman she’s becoming.

This story was submitted to Love What Matters by Megan Kitchell of Spokane, Washington. You can follow her journey on Instagram. Submit your own story here and be sure to subscribe to our free email newsletter for our best stories.

‘I had to leave, I had to be a single dad, to be a better father for my daughter.’: Single dad explains his relationship was ‘vulnerable, beyond repair,’ despite being determined to have a ‘strong co-parenting relationship’ 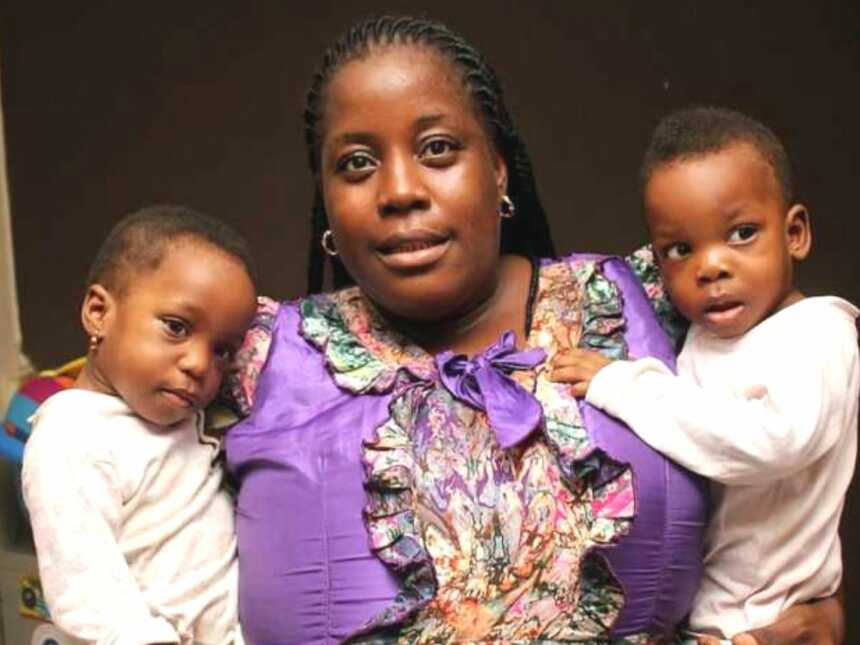 ‘I couldn’t even take care of myself, let alone the three of us.’: Single mom of twins shares the ups and downs of their journey

“The moment I knew I was pregnant, I knew I got a donor and not a father for my kids.”