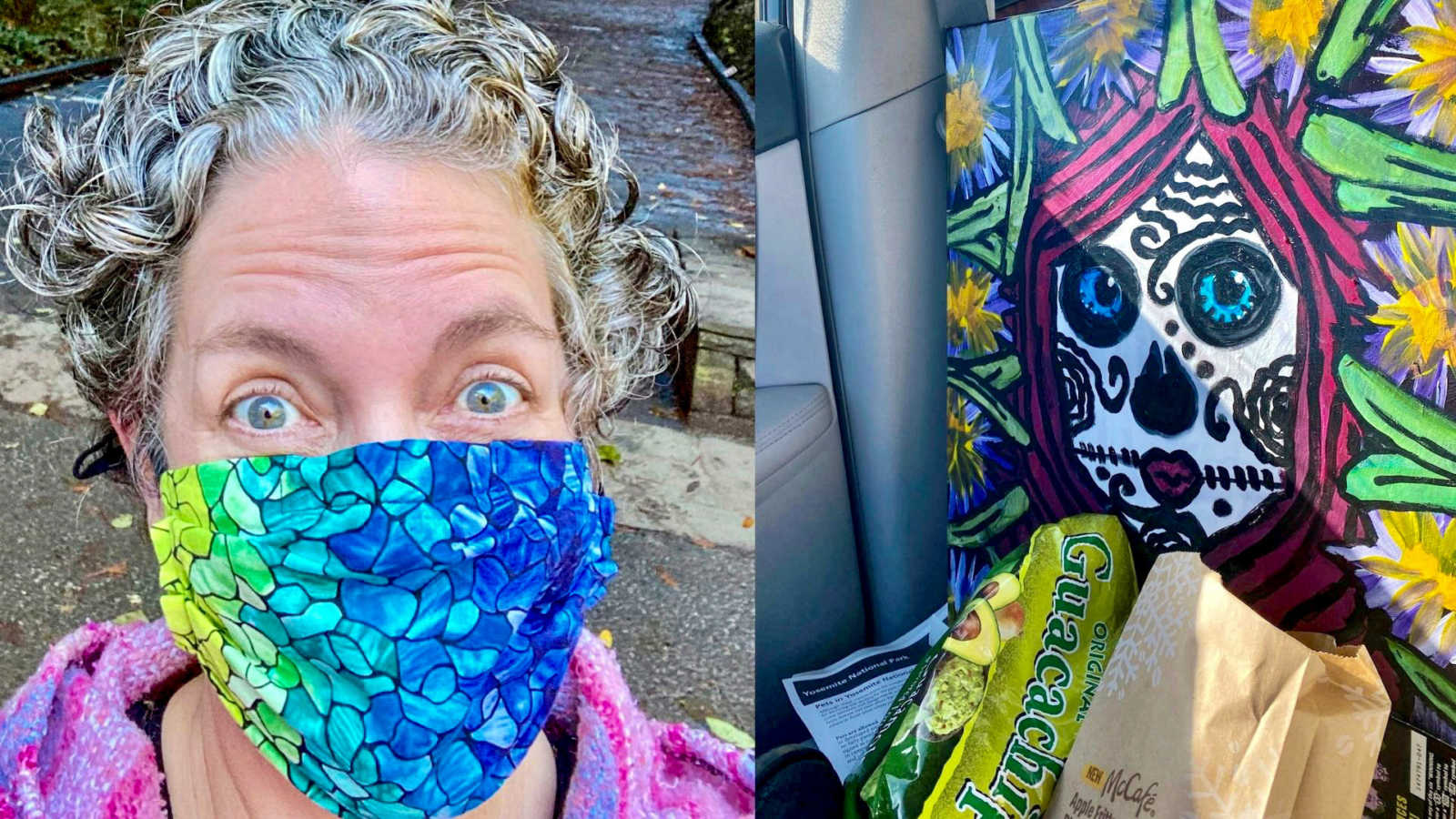 “A couple weeks ago, I took off on a socially distanced solo journey across the country to deliver two commissioned paintings to a friend in Southern California. I could have mailed them. But at 48 years old, I’ve found myself really thinking about what I want the next chapter of my life to look like. I am an artist. I’ve always been an artist, but I’ve only recently been face to-face with the idea that it’s what I should be doing, and that through my art, in a variety of capacities, and by really diving into the things that bring me joy, I can create a life of abundance for myself, and in turn, others. My god, that’s scary, though.

Delivering the paintings, and then taking a nostalgic trip up the coast, remembering the time I did the same with my kids who were about five and six at the time, I believe, quickly became something I knew I had to do. I needed time alone in the car (I did take Dave—my literal ‘Road Dog’), to think, to feel, to…I don’t know…figure out what I wanted to do. Or find the courage to do what I already know I should do. So I did…I spent eleven days on the road with Dave. I could derail here and tell you about all the amazing experiences we had along the way: the breathtakingly beautiful sunsets, California sea otters being so adorable you wanted to explode with love, giant redwoods, the Christmas Star from a rest stop somewhere near Amarillo, Texas…but I won’t, because I have to tell you about the painting I bought on the side of the Walmart exit, in Fresno, California, in the dark.

I was on the return end of the trip, coming out of Yosemite where I had spent the day, and had planned to make it to Fresno before stopping for the night. I was tired. I figured I’d get into Fresno itself, pull off somewhere and look for/book a hotel for the night. I kind of had to go the bathroom, but we weren’t in emergency status yet. So I pull off at I think was the second Fresno exit, turned right, and came upon a Walmart Supercenter. I pulled into the parking lot and sat for maybe ten minutes while I took care of the hotel. I did notice the parking lot seemed very full and there was an odd amount of traffic, it seemed—but it was just a few days before Christmas.

I got in the line of cars to exit the parking lot, and I noticed a slender Black man standing on the corner, near the driveway. He had a little cart of wares I couldn’t really make out in the dark, but what caught my attention were the canvases he was holding—and there was one propped on his cart. Two of them were versions of sugar skulls—very vibrant and eye-catching. The third was a little different—a scene of a mother from behind with large beautiful braids, and a small child reaching for her hand as they’re both looking out the window at the moonlight (though I couldn’t see all this detail at this point). I rolled down the passenger window and asked if he had painted them. He told me his girlfriend had.

I asked how much he was asking for them, knowing good and well I had less than $5 cash on me. He said $15. I told him I didn’t have any cash, but I was going to go get some and come back. I swear as soon as that came out of my mouth I was like, ‘WHAT, Carie? You’re reaaallly tired, you do still need to use the restroom, and there are no banks around here.’ I even reasoned with myself, as I kept driving the opposite direction of anything with signs that said no U-turn, there was no way this guy really expected me to come back, anyway. I’m sure people say it all the time when they ask the price and either can’t or don’t want to pay what he says. But I couldn’t—something inside me needed to and was telling me to go back.

So I eventually turned around and figured I’d pull into Walmart, run in and buy a drink or something and get some cashback—I’d planned to give him $20. However, what I failed to notice earlier was there was a line to get into Walmart. Ugh. So out I go again, but this time I’m on the other side, making it impossible to get across the intersection on the side for the bank I can see. I end up in a gas station/convenience store— not a big fancy chain type, I’ll just leave it at that. But they had an ATM and I was able to get some cash. It was probably only ten minutes later, but I’m sure the man on the corner was surprised to see me pull past him again and park on the side street. I got out and was talking to him as I was looking and trying to decide which painting I wanted.

He told me he and his girlfriend had been getting by okay, but recently had been struggling. He said she got some canvases, and some paints, and just started doing these different paintings, and that selling those, along with his other stuff had, really made a difference for them. I kept remarking at how beautiful they were and how I loved the colors and large brush strokes, and he was just so happy and so proud of her. I finally picked the one I wanted—one of the sugar skulls. He said, ‘Oh—that one’s normally $20—it’s this other one that’s $15, but since I told you $15, I’ll sell it to you for $15.’ I told him I was going to give him $20 anyway, because I thought even that was selling them short.

He was so thankful, and you could tell so proud of his girlfriend and her paintings. I asked if she’d signed it, and he said no, she was very shy, didn’t think they were very good, and didn’t think she should. He was almost apologetic and told me if I wanted to, she was over at the hotel (pointing to a Motel 6). I still had to go to the restroom, and wasn’t trying to scare this poor woman with my enthusiasm. I thanked him for the offer, but asked what her name was, so I could put it on the back and be able to honor her work and energy. He said her name was Belvina (not positive about the spelling). I regret I never asked this gentleman his name. I asked him to tell her I was also an artist, and her painting was going to hang in my studio. He said he would.

I hope he did, and I hope Belvina continues to put this beautiful energy into the world—and I hope she finds the love and confidence in herself to start putting her name on everything. I set the canvas on the seat next to me and took a picture of it under the light of a streetlamp. In that moment, it felt like the whole purpose of the trip was to buy this painting and encounter Belvina’s work and her lovely boyfriend, standing on a corner in the dark before Christmas, in Fresno, California. It felt like answers. It felt like confirmation, and encouragement, and all the answers I was looking for, even though I wasn’t really sure what the question was.

The world needs art, light, and love. I am an artist and I can bring all that to the world, too—just like Belvina. And so I think that’s what I’ll do. If you’re in or around the Fresno area, please look for this proud, smiling gentleman near the Super Walmart. Get yourself some gorgeous art, and maybe you can let me know if Belvina is signing her work yet. I would love for a local newspaper or television station to do a story on Belvina and her art—give her more exposure and perhaps and outlet for steady income from her art.”

This story was submitted to Love What Matters by Carie Bellanger. Submit your own story here, and be sure to subscribe to our free email newsletter for our best stories, and YouTube for our best videos.

‘A first-time mom, I didn’t know what to do. An old woman spoke out, ‘Oh honey, give him to me!’: Woman recalls stranger’s kindness, ‘Be someone’s silver lining’

‘I’m sorry to intrude. I don’t know you, but I saw you crying and I wanted to buy you flowers.’ Tears streamed down her cheeks.’: Stranger shows ‘priceless’ act of kindness, ‘We will never forget’

‘The manager said, ‘Could you please re-tell me your card number?’ I thought about the disrespect I’d seen this past week.’: Mom advocates for kindness after post office visit 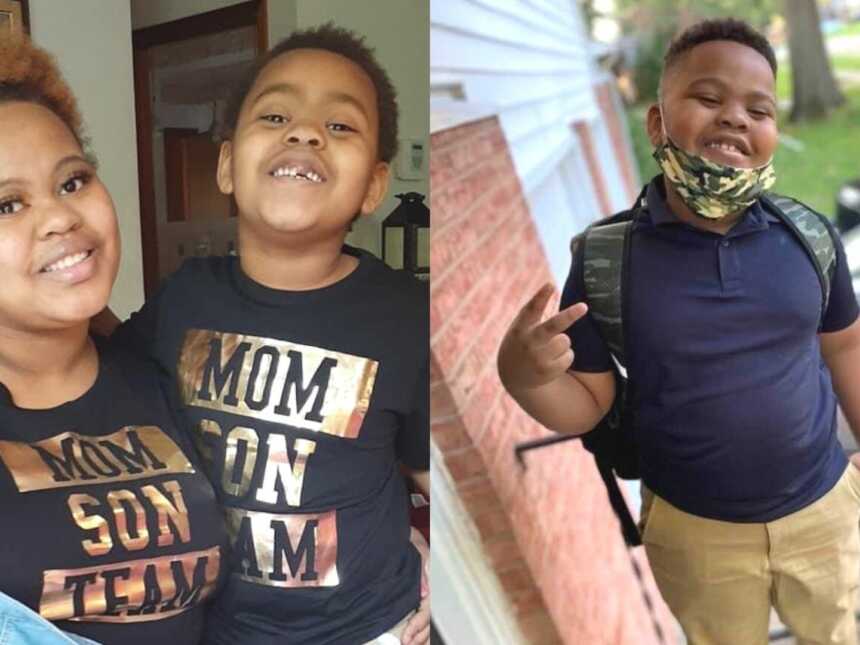 ‘Carter is threatening to self-harm.’ It was a huge wake-up call for me.’: Mom shares 8-year-old son’s mental health journey

“I’m his voice when he is voiceless. I’m going to always speak up for my child and his mental health.”