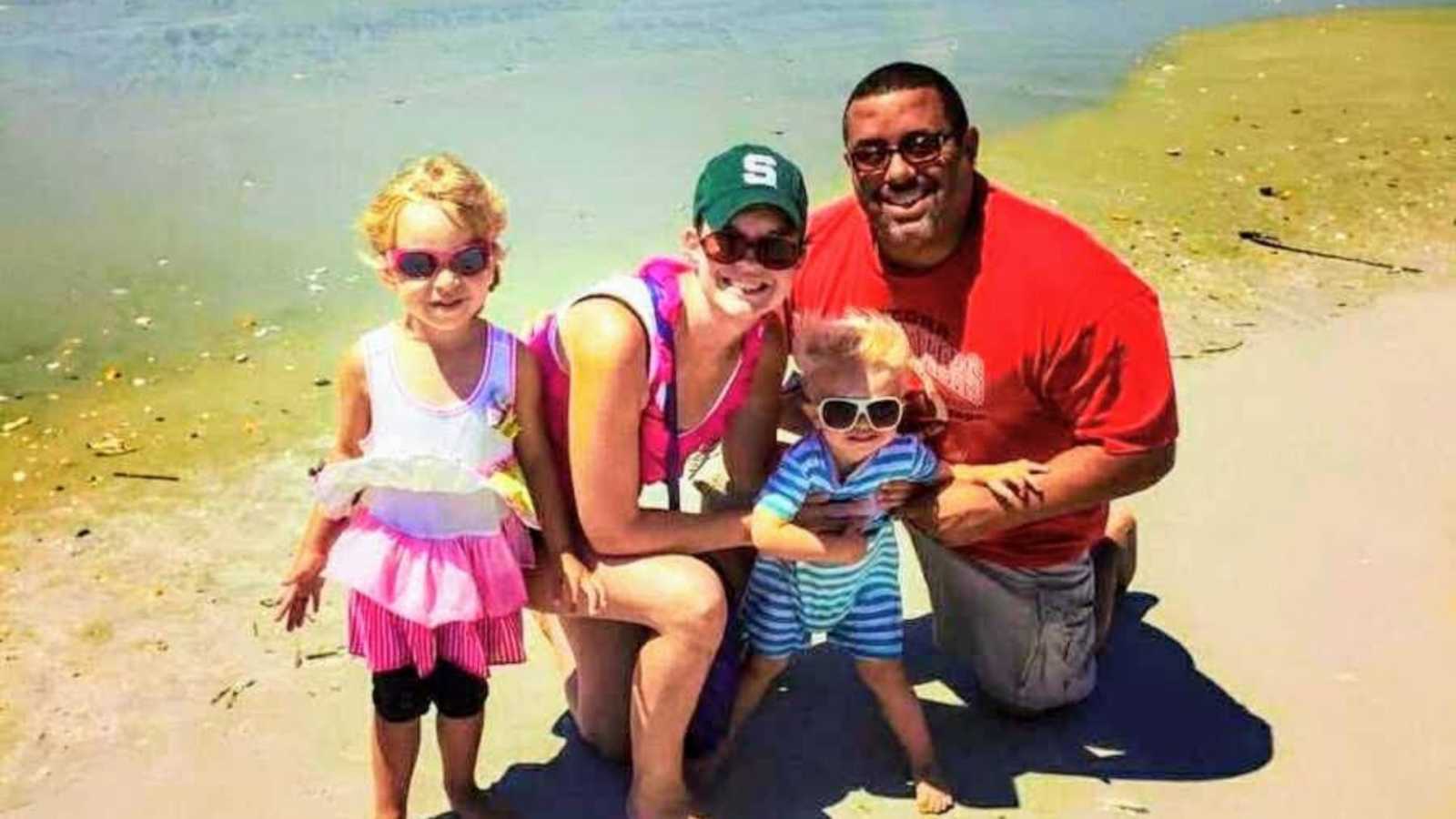 “When my husband and I started dating, I was nervous to introduce him to my family. But not for reasons that you might think.

He was great with kids and kind to everyone he met. He had a great job, impeccable credit, and was great with budgeting money. Like my family, he was also Catholic. But he was black.

I grew up outside of Detroit, Michigan with my parents and two younger sisters. I had a hippie, vegetarian dad and a laid-back mom. I was always encouraged to do whatever made me happy as long as I could support myself. I had a pretty liberal upbringing, but interracial dating was something that was never discussed and I wasn’t so sure they would be willing to accept him.

My journey for happiness took me to Phoenix, Arizona where I began working as a special education teacher at a high school. It was there that I met Justin, the choir teacher. He was kind and caring and, not to mention, hilarious. He was easy to get along with. He became a great friend and helped me out during one of the lowest periods of my life. Just 90 minutes before my abusive boyfriend would be home from work, he and three other friends rushed to help me move out of my apartment. Shortly after, Justin and I began dating.

The topic of his race never came up in conversation because it never mattered to us. I was Erin, the sum of all my parts, not just the color of my skin. And he was Justin. Not black Justin, or bi-racial Justin. But just Justin.

Before our first Christmas together, I remember calling my grandmother, who is the amazing matriarch of our family. I asked her if I could bring a boyfriend to Christmas, which she thought was a great idea. I added, as nonchalantly as possible, that he was black. She responded, ‘Dear, the president wass black too. Of course you can have a black boyfriend.’ I’ll never forget that moment.

Even though we are together, many people cannot understand it. After our babies, Ava and JJ, were born, I can remember overhearing Justin telling the kids that they were not allowed to scream in grocery stores. That someone might think that daddy isn’t their real daddy. That he’s trying to take them. It all made sense to me when we went to the airport as a family and Justin was stopped. ‘That’s my family,’ he said, pointing to us. The man screening him looked back in shock. ‘For real?’ He refused to let him through until Ava started shouting for him. Being with Justin for 12 years has been very humbling.

I now notice the looks, the stares, the mean comments. I have noticed the people who close doors on purpose as we approach them. But with all of the negative comes the positive. I feel completely blessed to have Justin in my life. To have amazing family and friends and people across the country that love us for who we are, not what we look like. For our character, not the color of our skin.

In 1967, the Loving vs. Virginia court case legalized interracial marriage. Justin is part of the ‘Loving’ generation, the first group of children born to interracial marriages. I always say that it is because he is one of the most loving, caring, and empathetic people that you will ever meet.

He is an amazing father, does more around the house than I do (as I’m writing this, he’s folding laundry), a wonderful husband, lover, and best friend. He is a son, a brother, a friend, a teacher, a musician, and a bi-racial man. And I wouldn’t trade him for any person on this planet. He’s perfect for me, no matter what his race may be.”

This story was submitted to Love What Matters by Erin Jenkins of Phoenix, Arizona. You can follow her journey on Facebook. Submit your own story here, and subscribe to our free email newsletter for our best love stories.

‘There was an envelope in the mail for me. ‘It’s a picture of you with a shawl around your head. Why are you wearing that?’ My stomach turned. I was scared to tell her.’

‘When we began dating, I wasn’t allowed to tell my grandparents. ‘They are wholly against interracial dating,’ I was warned. We found ourselves without friends, but we persisted.’

Do you think love should be accepted regardless of race? SHARE this story on Facebook to spread the message.