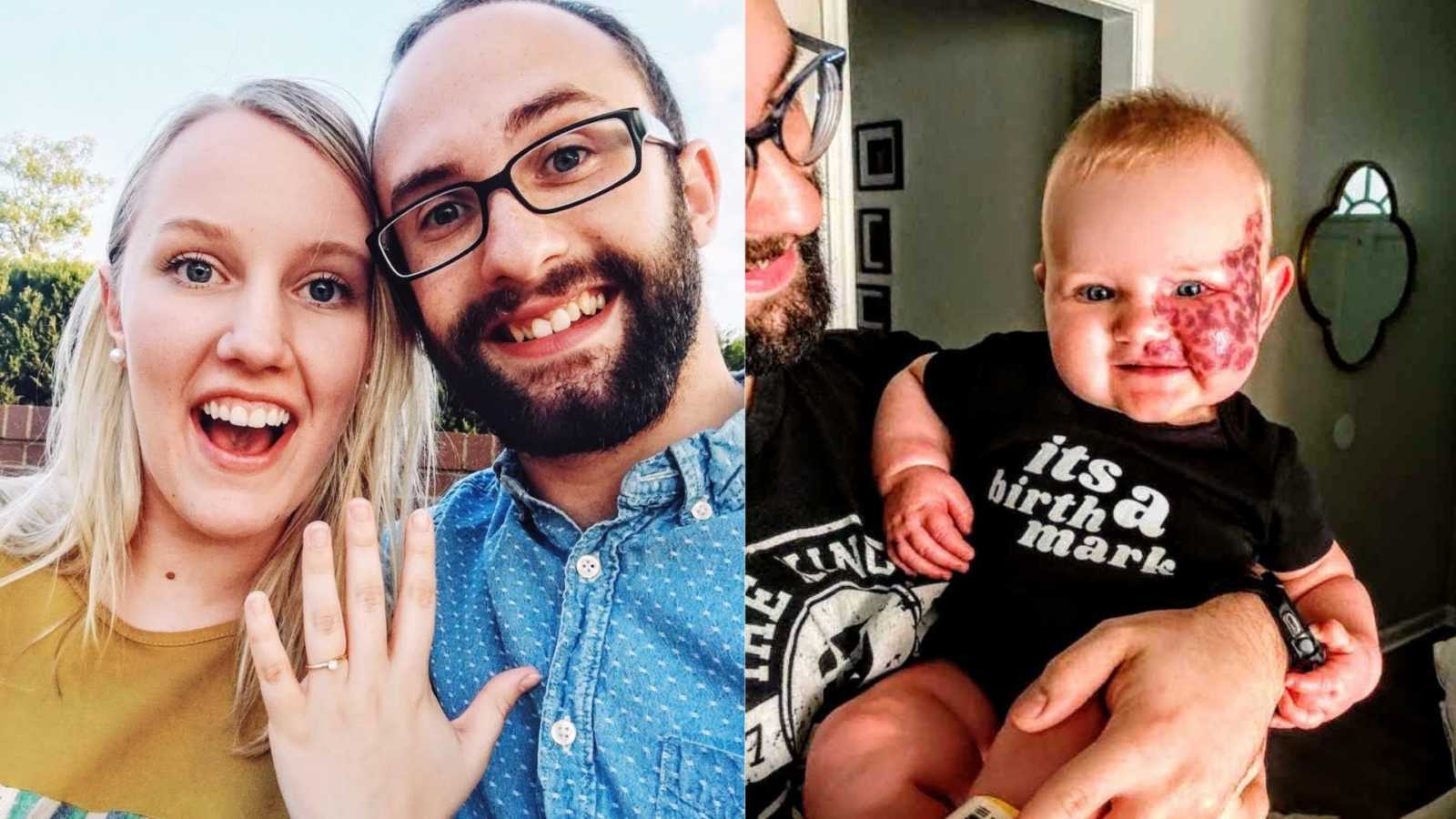 “Penelope was a surprise baby. We weren’t trying to get pregnant, but my growing bump was a daily reminder I was soon to become a mother. The second I saw our little girl on the sonogram screen for the first time, my heart leapt. As I watched Penny’s nine week-developed arms and legs jerk back and forth uncontrollably and impressively quick, and as I took mental pictures of my husband in tears watching the sonogram screen, my original plans for my life changed. I suddenly could not wait to meet my jittery little baby. I went into labor on February 13th, 2020 just before noon, and seven hours later, I met Penelope Louise at last.

Before Penelope was born, I had every inclination she would be born perfectly healthy. Every sonogram indicated she was developing spectacularly, which was always such a joy and a relief. So, it was a bit of a surprise when I noticed the left side of her face was a deep red color, and in a very defined shape too, kind of like the shape of a country. I think we can all agree newborn babies look a little strange though, so I didn’t think much of it. Until I heard a few nurses murmuring about how what they initially thought was bruising was actually looking more like a birthmark. I heard one nurse say, ‘I don’t think that’s going to fade.’

I remember lying down on the hospital bed getting stitched up post-labor. Penny was still on my chest and she was covered in white vernix from birth, but her eyes were wide open, taking in her new world. I remember how frustrated I was by the fact I couldn’t relax after I had just conquered childbirth, now holding my reward. I didn’t know how to comprehend I had just officially become a mom, much less that my daughter was born with a facial difference. I have a vague memory of two nurses helping me up off of the toilet after I nearly passed out trying to do it on my own. While my vision was still dotted with stars, I remember telling them I didn’t care if the ‘bruise’ was permanent because I loved her just the way she was, and I meant it.

I learned the next morning Penny’s birthmark is called a Port Wine Stain, and there are currently no known genetic causes or pregnancy causes for these birthmarks. However, what was nearly impossible to swallow was the fact that Port Wine Stains can cause health problems. Penelope’s stain in particular was a ‘concern’ to our doctor because it covered part of her forehead and her eye. I was told she would need an eye exam to check for glaucoma, and a possible MRI to check for brain involvement (signs of decreased blood flow to the brain caused by the Port Wine Stain, known as Sturge-Weber Syndrome). As for the skin itself (which now was starting to seem like the least of our worries), laser treatment was highly recommended to keep the skin healthy. I learned that Port Wine Stains are ‘progressive,’ which means they grow and change as you do, and without treatment they can develop complications. I left the hospital overwhelmed, knowing there were several different medical professionals I needed to contact, but with literally no idea what else 2020 had in store.

Turns out, it’s difficult to schedule appointments with doctors when there is a pandemic going on. Much to my husband Derek’s and my relief, Penny was able to see an eye doctor prior to the COVID restrictions, and even though he told us she would need regular check-ups for a few years to rule the risk of glaucoma out completely, her chances of having it were looking very slim. A few weeks later, amid the pandemic’s restrictions, we had a virtual consultation with a pediatric dermatologist to talk us through the laser treatment process. He recommended Penelope receive six to ten laser treatments beginning at six months of age. He encouraged starting ‘as early as possible,’ if we were able, but the next few months consisted of several treatment delays which made that difficult.

After each rescheduled appointment, I felt angry. Not just angry an appointment had to be delayed, again, but angry that my family had to go through this process at all. But as the months passed and as Penelope grew, so did my love for her. Getting to know her little personality was my ray of sunshine in the heart of the storm, which for me was adjusting to new motherhood and unforeseen circumstances, in the midst of a global pandemic. I loved her to bits, but if I was honest with myself I wished her birthmark wasn’t present.

I imagined what it would be like if her birthmark wasn’t around. I imagined us going to the store and not getting stared at, or getting asked ‘What happened?’ I imagined the act of simply introducing my baby to strangers, without having to explain ‘it’s just a birthmark.’ I imagined life without doctor’s appointments on the calendar, without having to anticipate the upcoming times Penny would have to feel pain. I imagined a life without constant fear of possible complications her birthmark could cause, which kept me up at night on my worst days.

It was difficult to come to terms with the fact I didn’t love everything about her birthmark. After all, I’m not the one who has the birthmark, I’m the one who has to raise the one who has the birthmark, and I’m raising her in a world full of people who can be really mean. I want to raise the most confident girl to ever walk planet earth, and I want her to know I love her fiercely, but I hate I have to introduce her to pain so early, when I can’t even explain it. And I hate that facial differences aren’t yet something many people consider to be beautiful.

I processed these feelings for months as Penelope’s first treatment continued getting delayed, but I’m grateful now for those months where the world literally stood still for awhile and I got to mentally sort out some things. I still don’t know why Penelope specifically was born different, but I know I’ve been entrusted with her precious life, and my hope is I will raise her to love who she is, which includes loving her birthmark. She doesn’t have to love the pain it may cause or the unsolicited attention it brings, but I pray she will love the fact it’s part of what makes her who she is, and she will know that her ability to wear it confidently will impact not just her own life, but everyone else’s she comes in contact with. It’s already impacted my own.

As I write this today, Penny has received one laser treatment, and she handled the process much better than her father and I did. She was smiling immediately afterwards, and what I dreaded for so long as something that would be so traumatic ended up being okay.

There is still so much ahead. Just like Penny’s birthmark is ‘progressive,’ so too are she and I, and so is our world. The future is full of unknowns, so I do my best to repress the ‘what if’s’ and to rest in the blessings of today. Today, Penny is seven months old. She still shows no signs of glaucoma or brain involvement, and the first treatment is producing promising results. She and her dad and I are living with her grandparents for a season, and this morning I watched her giggle as her grandpa bounced her up and down on his knee. She grunts when she tries to crawl, which she can nearly do, and sitting up gets easier for her every day. She drools everywhere, and she makes messes with food more than she eats it, but she is making progress.

This story was submitted to Love What Matters by Deborah Pritchett of Fort Worth, Texas. You can follow their journey on Instagram and Facebook. Submit your own story here, and be sure to subscribe to our free email newsletter for our best stories, and YouTube for our best videos.

‘I can’t! I can’t leave the house without makeup!’ I was shocked. He looked me in the eye. ‘You can’t, or you won’t?’: Woman embraces port wine stain birthmark after years of ‘feeling ashamed, insecure’