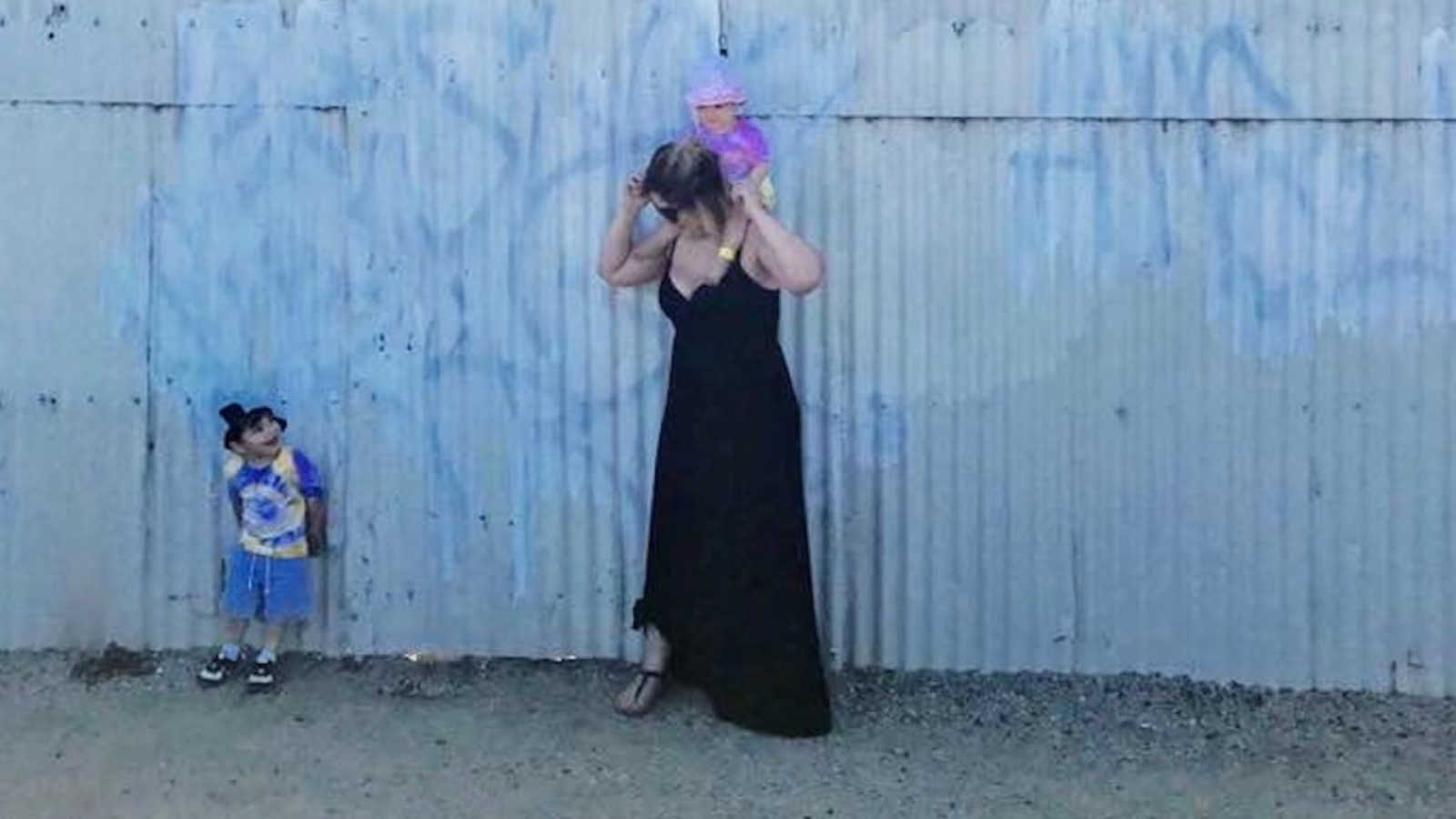 “To the mother at the pharmacy.

To the beautiful, strong yet vulnerable mother.

I saw you today, in the line of the pharmacy, filling in your script.

I saw you hand over your note with sadness in your eyes. I saw you look at the pharmacist with fear as she read out your medication details. I heard her ask you if you’ve ever taken ‘Lexapro before’ and I heard you reply with the most defeating sounding ‘no’ I had ever heard. Rocking your stroller with one hand and holding onto your toddler with another.

I saw your knuckles turn white on that stroller handle bar. I saw you look down on your baby while it was starting to stir with the same desperation I have known. ‘Please don’t cry’ you whispered.

I know where you’ve been. I have been there too. Some days I am still there. I know you haven’t slept a wink. You had your check up and the doctor recognized something in you, or maybe you told her, that after 6 weeks those feelings aren’t going away. That you’re doing the work of ten with only two hands, and it’s weighing on you heavier than anything you’ve felt before.

I saw you stand and wait with your shoulders slumped forward, while your toddler pulled down the tissues. I saw you stare into space. I wanted to go to you. I wanted to run to you and hug you. I wanted to tell you that you’re not alone, that I’ve been there. That I’ve felt that sadness, that it’s the saddest feeling you’ve ever felt, and it feels like you’ve been punched right in the chest. That the no sleep causes you to feel like an anxious zombie. So tired but so on edge.

I wanted to hug you and tell you to let those tears just waiting in the corner of your eyes to come out. That you deserve to cry. That this is bloody hard.

I wanted to tell you that even though you don’t feel it and you won’t believe it, but you are a fucking legend. To call you amazing wouldn’t be enough. That you are a great, fantastic and a super dooper mother. That you are a beautiful human being who deserves love over and over ten-fold.

I want you to know that you might feel like an invisible powerless woman. But I see you. I see you. I see a woman who made the choice to help herself. A brave woman who is doing whatever it takes to be strong for her two children. Strong for herself. Who wants to fight those feelings of being overwhelmed, and desperate sadness to be more for her children. A woman who got up, and went out, with two children and got the help that she deserves.

I know you might feel like a failure. I know you might feel like you have let everyone down, including yourself. I know you said to yourself that you’ve got this and cried hard when you felt like it was all too much, like you haven’t got this. But you do have this. You do. You’re here. You’re trying to win against this ugly illness that does horrible things to us. You are so incredibly brave.

I didn’t feel brave enough to talk to you, but I wish I did. I should have told you. I should have told you that I was you, with two kids, embarrassed to hand over my prescription… wondering if I was judged as another failed mother… but I learned something along the way of this ugly illness. I learned that it doesn’t discriminate against anyone. That even the best mothers can get it. That it doesn’t matter how hard you try and how much you sacrifice and how many vitamins you take that it can creep up at you. I learned that in these moments it feels like it’s going to swallow you up, but I can tell you, it won’t win. It won’t beat you. I learned that no matter how strong it is, you can be stronger. You can fight it. And today, dear mother, you’ve taken a step to stomp it down, so I can see you are a fighter. I can see you will win this. I know you will win this. You will kick its ass. I believe in you.

Dear Lady at the pharmacy, I love you. You are loved. Your children love you, your partner loves you. You never have and never will fail as a mother. You are brave. You are beautiful, and you are my hero.

The (creepy) mom behind you at the pharmacy who on most days, wins this, and on some days, kicks ass x”

‘Come on, you’ll be fine. Your friends did it.’ She gave in, inhaled helium. Mid-laugh, she collapsed.’: 14-year-old girl dies of helium inhalation, ‘my life will never be the same’

“‘Mom, can I go to a slumber party?’ It was 5 minutes away. Of course, we said yes. ‘Be careful. Don’t do anything I wouldn’t do.’ The mother of the birthday girl became ill, so she asked her daughter to host. Instead, she took our kids to the liquor stoor, brought 30-year-old men in the house. A helium tank was brought out. My daughter kept pulling her head away. The man insisted it wouldn’t hurt. Nobody saw it coming.” 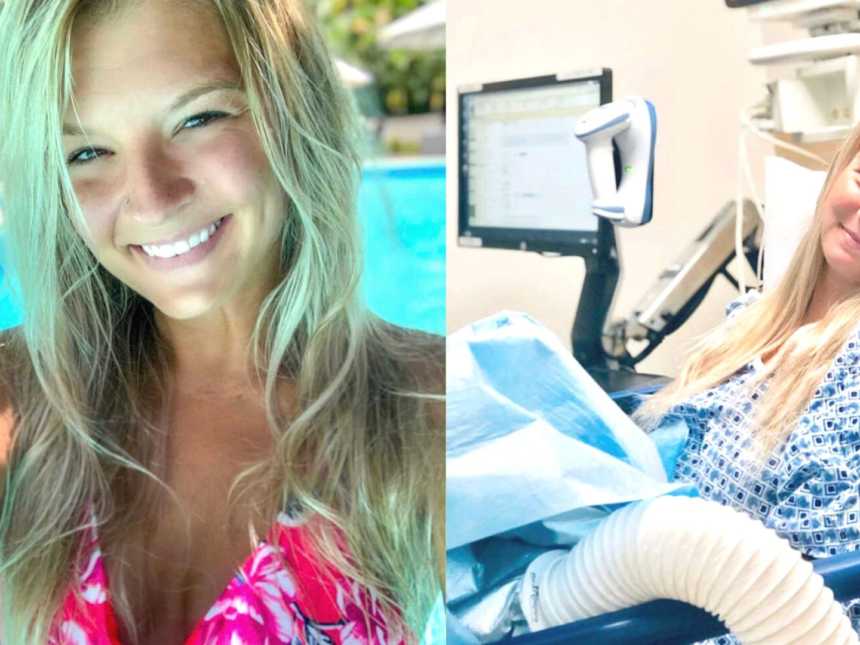 ‘I got my period every other week, 7 days straight. I had bruises up and down my legs. I thought it was part of ‘being a woman.’: Woman diagnosed with Endometriosis after years of ‘normal’ symptoms, urges us to ‘fight for answers’

“Inexplicable things started happening. I looked pregnant. Everyone poked fun at me napping every day. I sat in the parking lot of my doctor’s office with yet another pamphlet for painful periods. Every ounce of me wanted to run back and tell him to figure it out! Instead, I put my car in reverse and drove away in tears. Silenced, once again. I was absolutely losing my mind.”

“No business as usual. Because this is NOT usual.” 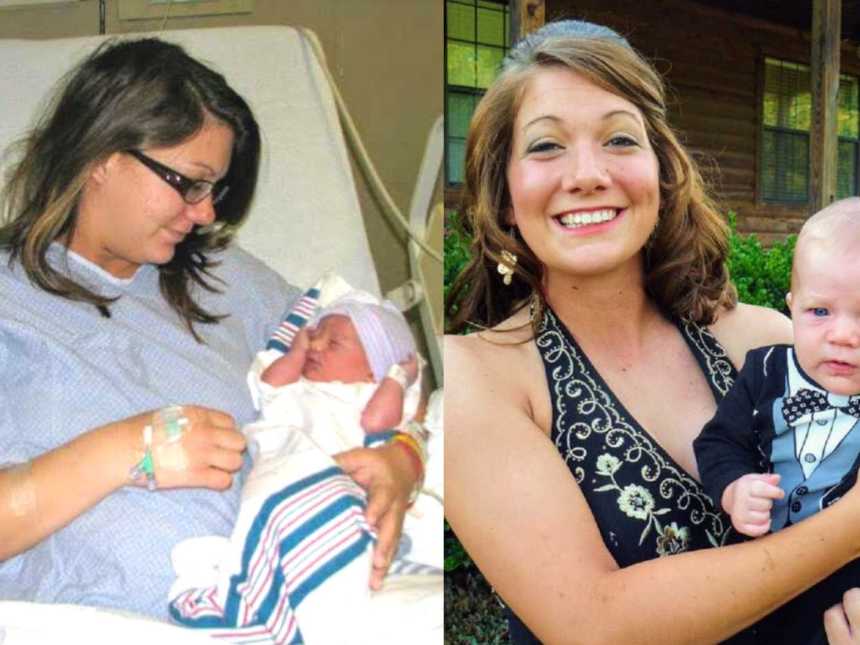 ‘Kids shouldn’t have kids.’ Shame spread over me. As a teen, I couldn’t hide my big belly.’: Teen mom explains why she ‘kept her baby’ at 16-years-old

“I had no money, no desire to be a mother. ‘You’re 6 weeks along.’ She pointed to a picture on a paper. ‘A heartbeat? Already?!’ 5 minutes ago I didn’t even know I was pregnant. It seemed so fast, too fast for me. I knew some would think I slept around, that I was promiscuous. I knew girls would talk.”