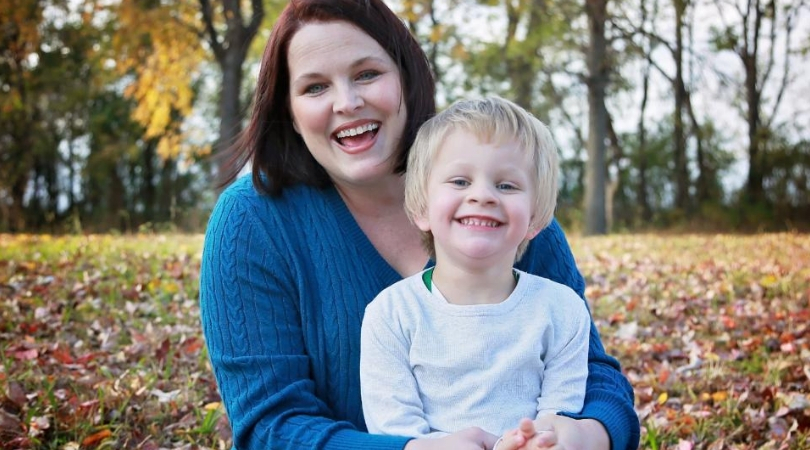 “I met my husband in April 2012, after a year of telling my sister to quit playing match maker. I finally had agreed to go to church and see if I might like him. We hit it off instantly. True love at first sight DOES exist! I married him that December, just before New Year’s. I knew he was the one by our 3rd date when my mom invited him to Mother’s Day lunch with my sisters. And I knew it was a forever deal when 2 months into it, he helped me clean my dad’s house after my dad had become disabled and told no one how bad it was.

I can’t have kids. So, adoption was first and foremost a requirement for my ‘yes.’ My husband had a tumultuous marriage several years before and had a son with Asperger’s he rarely got to see.

He did not want to adopt, felt he would never be a good enough father. He was afraid the child could have special needs or the same problems his son had, or he would be a terrible dad. But after a few days of debate and reassurance that God wouldn’t do that twice, he relented, and we got married.

Nine months later we got the call, a friend’s daughter was pregnant, did we still want a baby? So, the night before my husband’s birthday, we learned we would be parents.

His adoption was so unique. His grandmother has been a close friend for almost two decades. Her daughter has two older sons. She knew we couldn’t have kids and she made a child for us. His brothers know exactly why he was conceived, and they adore him and love to spend time with him. They are very protective of him.

We followed the pregnancy and were there for his birth. I got to hold my son skin to skin immediately after birth, but he was whisked away in what seemed like 30 seconds for trouble breathing.

He spent 9 days in NICU for a meconium aspiration. A NICU doctor said he had a high chance of Autism due to a specific birth defect in his heart that he had seen in most Down’s and Autism babies, just something he had picked up on.

So, we took him home and watched and waited. Our son, Isaac, or Ike as we call him, showed signs very early but we kept hoping. By 10 months we knew. He stopped all eye contact, refused touch, and stopped talking. All of his early milestones and development came to a halt. Gone was our joyful baby and suddenly we felt like we were on the outside looking in and losing ground. It was like watching our child disappear into the depths of his mind, unreachable to us, to anyone.

We were told in the beginning that his autism was severe, he would never talk, and would likely be completely dependent on us for everything. He also has hypotonia which affects his muscles and makes everything he does, exponentially harder than the average kid because they develop much slower than most kids. So, EVERY milestone or new development is a huge celebration. He JUST learned how to use a utensil to eat and is gaining more independence at play. He has gained balance and core strength in the past few months and is able to climb and do many things on his own that he previously needed help with.

It would be 23 months of long, intensive research, intensive therapies 4 days a week, trial and error, and prayers before I heard my son finally say ‘mama.’

He is still considered ‘nonverbal.’ He has ‘moderate’ autism and is the most brilliant, happy child ever. He giggles, cuddles in our laps, loves affection, and will hold our face in his hands and stare into our eyes. He has beaten the odds and defies science every day. He can count to 100, and much more, knows his alphabet in 4 languages other than English, knows shapes, colors, and can easily do 4th to 5th grade math. Music is his outlet. He ‘sings’ as he is waking up and all day. And he is just 4.

Every day he shows us what a little hard work, faith, patience, and persistence can bring. He is classically autistic, yet he shows that kids with autism do not fit all in the same mold, diagnostically or physically.

Everything we were told he never would do, he has begun to do, independently. We were told since he is 4, he ‘would never talk.’ Well, he is talking more each day through the speech program he goes to. We are moving almost an hour away just to get him into the school that follows this same program for autistic students. We are learning, and teaching him, that no one puts limits on him, but himself. His speech program director once said, ‘Who are we to tell our kids what they can or cannot do? Why limit them?’ She is so right. Only he can determine what he can and cannot do. Who are we to say he never will? And we keep that mentality in everything; it has changed his world. He should have been completely unreachable, we were told he would be. Yet here he is, larger than life itself.

My husband had a routine neck surgery 18 months ago and woke up paralyzed on the left (has gained most function back but still struggles). I have had 3 back surgeries and was diagnosed with MS and a brain malformation. But even through all that, we have the greatest light in our life. We have Isaac. And he lights up the room when he walks in. He brings joy to everyone he meets. He has an entire tribe that supports him and loves him. His adoption is open, and he knows his birth family. His birth mom gave us something we never could have afforded on our own. She gave us an opportunity we might never have been given otherwise. Her and his dad both selflessly agreed and were in it from conception to adoption. Isaac is their biological child. And our son. It was truly a once in a lifetime event.  Our life can be messy, hard, sleepless, traumatic, and sometimes beyond difficult. But it is so amazing, and I would not trade one day of it for anything. I can’t imagine NOT having this child or this man in my life. It was meant to be and that sentiment rings loudly from all sides of our family.”

This story was submitted to Love What Matters by Tonya Heath. Submit your story here, and subscribe to our best love stories here.