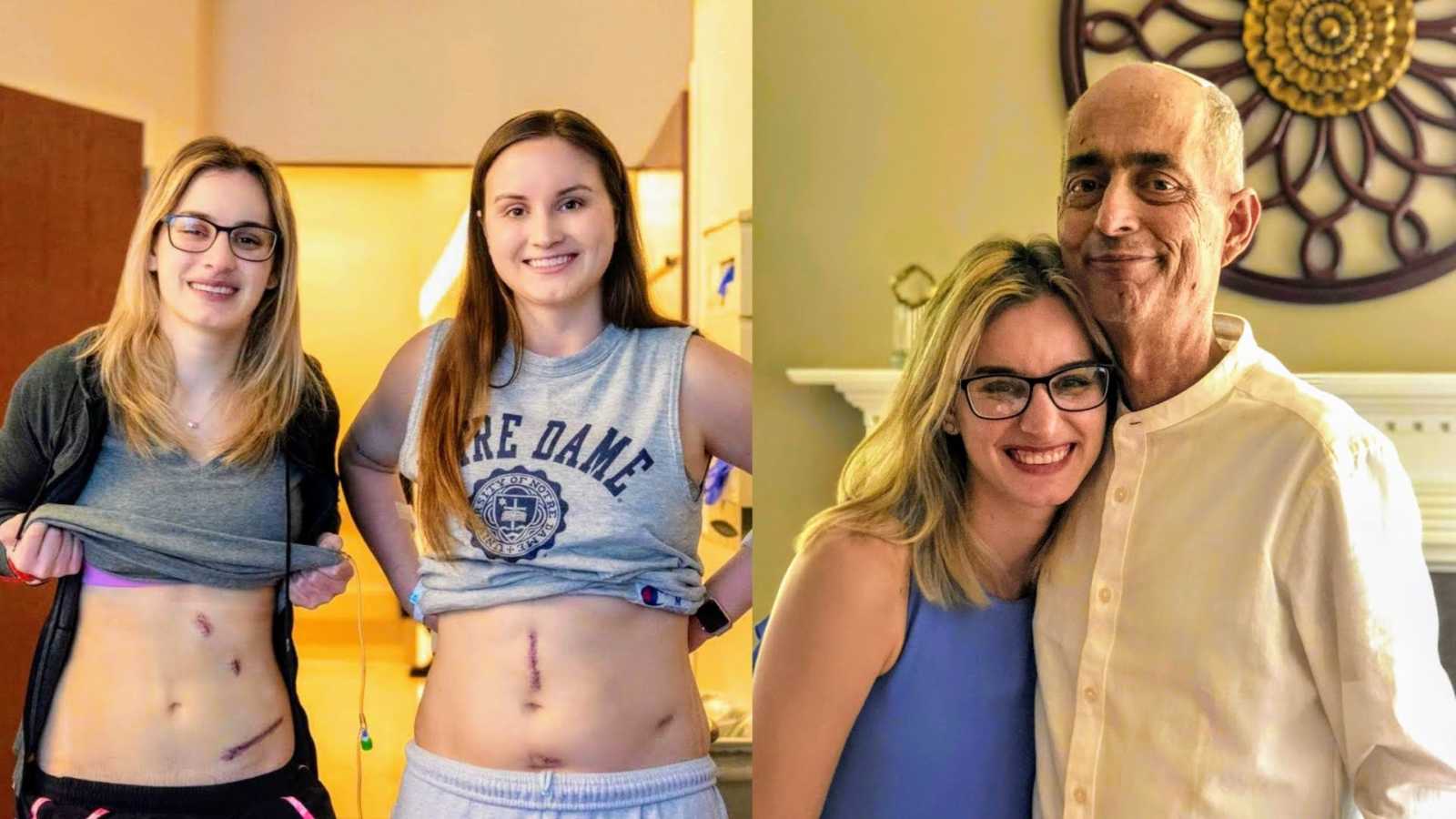 “Growing up, my dad was always sick. A lot of my childhood memories are of him being in and out of the hospital. That’s what a combination of Crohn’s, an inflammatory bowel disease, and Nephropathy, kidney disease, will do to you. Still, he had time to be a wonderful parent.

He worked from home. There were times I didn’t like coming home from school to an adult who always knew every single thing I was doing. But as I got older, I realized I was lucky to have my dad there all of the time. I loved that he was able to pick me up from school if I wanted, and he was around to go workout with in the evenings. He never let his illnesses define him or slow him down.

He was a fighter. I know a lot of people say that, but he truly was. His doctor once told us, ‘He has 7 lives!’ He had complication after complication. So many things should have killed him, but he kept surviving. But what really makes him a fighter is that he never complained about anything (even when he didn’t like it). And he never let it show either.

In 2010, we found out that my dad needed a kidney transplant. One year later, and still no kidney, my brother Josh decided to step in. ‘I’ll donate my kidney,’ he said, just 19 years old. Only 48 hours after the transplant, my dad was back at home again, healthy.

Everything seemed perfect again. It was truly a miracle how well Josh’s kidney worked for our dad. Sadly, it would only last a couple of years.

At the time of my dad’s transplant, I was a senior in high school and had plans to go to nursing school in the fall. My dad received his transplant at Northwestern Memorial Hospital in Chicago. I was so impressed with the care my dad received that working there became my goal. After I finished nursing school, I was lucky enough to land my dream job as a nurse there in the Medical Intensive Care Unit (MICU).

In 2014, my dad got a kidney stone that caused permanent damage to his kidney, causing him to need yet another one. In 2015, we were told, ‘He’s going to need a second kidney transplant in the next few years.’

A year went by and I decided to get tested to see if I could be a suitable donor. By the time I was approved, however, my dad’s health started to rapidly decline. The doctor told us, ‘He’s too sick for a transplant now.’ We spent the next two years trying to get him healthy enough for surgery.

In September of 2018, he got really sick and ended up as a patient in the MICU (my unit). The doctors I work with told our family, ‘I don’t see him ever leaving the hospital unless it’s on hospice.’ So, we changed our goals of care for him in order to make him comfortable and took him home. I watched him lay there and breathe, in and out, wondering when he was going to take his last breath. Then it happened. Just four days later, he took his last breath. I watched him die. It was by far the saddest thing I have ever experienced.

My sister Hannah and I had seen what the miracle of organ donation can do for someone when Josh donated to our dad. After he passed, I was hit with an overwhelming feeling that someone else deserved my kidney. I thought to myself, ‘Just because my dad couldn’t receive my kidney, doesn’t mean somebody else shouldn’t.’ Hannah expressed the same wishes. We decided that it would be a beautiful way to honor our dad.

In 2018 alone, my dad had experienced seven hospital visits in just 8 months. We didn’t want another family to go through what our family did. So, we contacted the transplant department at Northwestern in December to start our workup.

Growing up, my dad always told us, ‘Make someone else’s day better.’ On March 14 & 15, Hannah and I did just that. I was nervous and excited the morning of the surgery, but definitely more excited than nervous because this was finally happening! But both Hannah and I, along with Josh and my mom, were very calm. We could definitely feel my dad’s presence in the room. We each donated one of our healthy kidneys to a stranger.

There is a quote from This Is Us that says, ‘You took the sourest lemon that life has to offer and turned it into something resembling lemonade.’ Well, we took the worst thing that happened to us and made something beautiful out of it.

Initially, grieving sucked. It still sucks. And it sucks because no one can tell you how to grieve or when it ends. Certain things would tick me off that normally didn’t and it took time for my body to realize what it was feeling. A guy broke my heart recently and it upset me more than I ever thought it would because part of what I was feeling was unfinished grief for my dad.

I wasn’t sure what it was going to be like for me when I went back to work. I don’t normally cry in public and have never cried at work, but I feared I would see something and it would trigger me to cry. Thank goodness that never happened. The MICU felt like an extremely safe place for me to be. Everyone I worked with knew what I had gone through and I never felt like I was alone. If anything, I became hyperaware of when my patients were dying or close to dying. I didn’t cry or get emotional. It just made me feel differently inside.

One day at work, I admitted a patient who was about my dad’s age when he passed. This patient also had a kidney transplant and a lot of complications from it. Our doctor told his family that he had weeks to months left. ‘The long-term prognosis is not good, so you should start thinking about what extreme measures he would want,’ she said.

I was so envious of them. They were getting a talk my family never got. When we found out my dad was dying, we had days. Days in which my dad wasn’t even with it enough to have a conversation.  But I was able to push past these emotions. I wish he had seen that patient for longer. I really wanted to give him a hug and tell him how sorry I was, but also how lucky they were.

Today, Hannah and I are in the process of arranging a meeting with the recipients of our kidneys. I know some people think we are crazy for having surgery for a complete stranger, but it’s the best decision I’ve ever made. Not only have we saved someone from going through what my father went through, but when I look down at my scars, I feel him nearby. This is for you, dad.”

This story was submitted to Love What Matters by Bethany & Hannah Goralski of Chicago, Illinois. You can follow their journey on Instagram here and here. Submit your own story here and be sure to subscribe to our free email newsletter for our best stories.