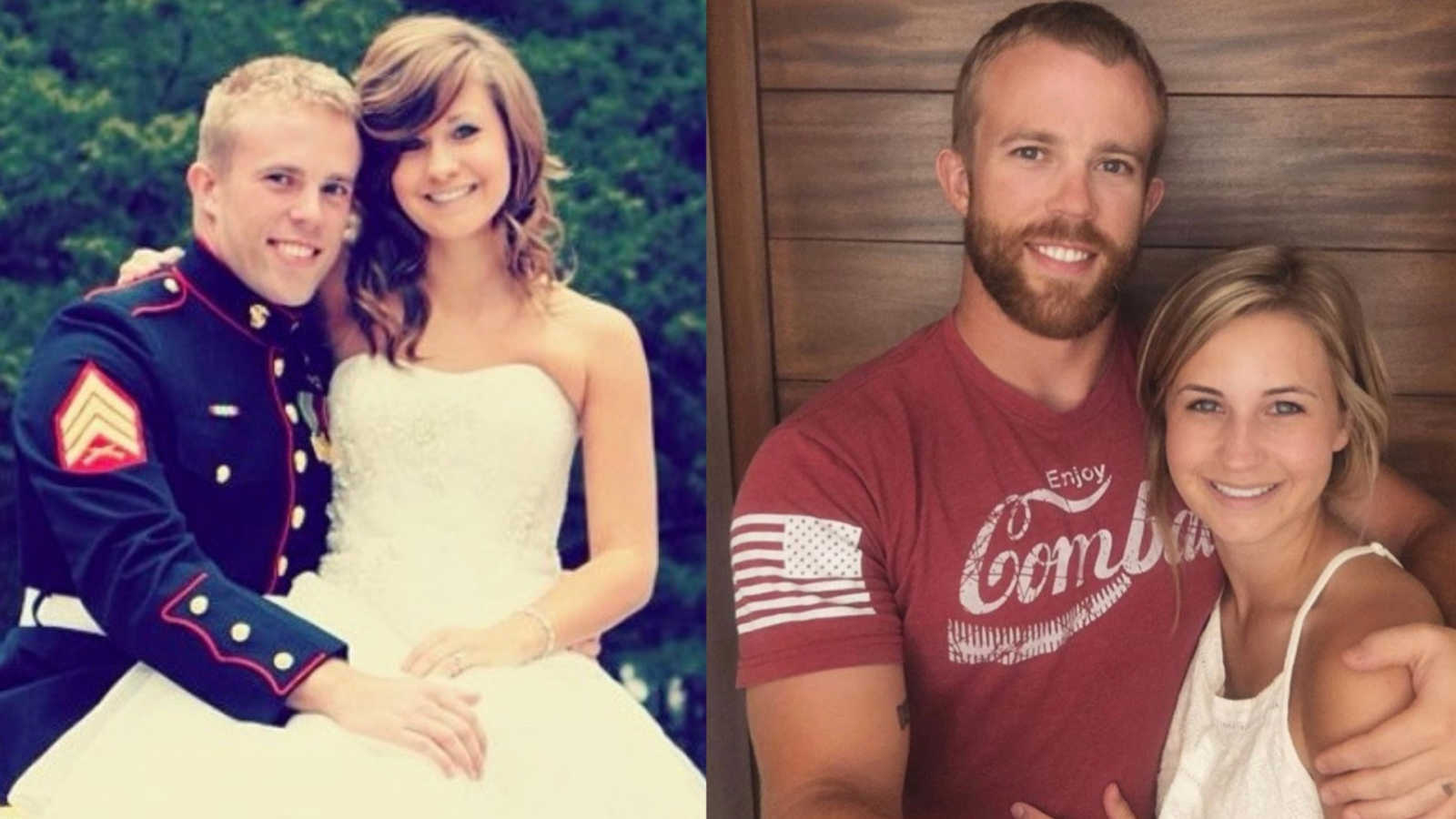 “I met my husband Jake when I was 18. He was 20 at the time and stationed at Camp Pendleton serving in the United States Marine Corps.  Fifteen months later we were married and three days after that, he deployed for 8 months. We spent the first 6 years of our marriage enjoying each other and growing together.

I was on the pill for those first six years. It was great, or so I thought. It wasn’t until going off the pill I realized what it was doing to me. My libido was essentially non-existent by the end of it and I didn’t feel like ‘me’ anymore, but I couldn’t figure out why. After going off it though, I felt more alive and like myself than I had in years.

That feeling lasted about a month. I had a period right off the bat and then zip, notta for three months. I broke out, gained weight, my hair became dull and greasy, and it was falling out in clumps in the shower. I was so sure I must be pregnant. So I took a test, and another, and another… all negative. For two months I took tests and finally called my gynecologist. She dismissed it as perfectly normal and said it would take time for my body’s system to start functioning on its own again and work the built up hormones out of my liver.

Hormone build up? That didn’t sound good. She gave me a round of progesterone which kickstarted a period.

After that period, it was back to nothing. My acne though, was full steam ahead and I continued to gain weight. By December of 2017 I had put on 20 pounds over the course of five months. I was miserable and felt incredibly defeated.

Those months were some of the darkest in my life.

The doctor wanted to continue with the progesterone or put me back on the pill rather than get to the root of the problem.

Three doctors and six months later, we found a doctor who genuinely cared and wanted to treat the problem rather than put a bandaid on it.

PCOS. I wasn’t shocked by the diagnosis. I had been reading up on it for a few months by that point.  I was, however, shocked by the lack information regarding PCOS. It was a huge relief though to have some answers and the next several months involved a change in diet, detox, medications prescribed and dosages tweaked as we went.

April 2018 I had my first real non-induced period since the previous July. If a period can be described as glorious, it was.

The next month – two pink lines! We were pregnant! We heard that precious baby’s heartbeat at 7 weeks, and 3 days later our sweet baby went to Heaven. Today, January 19th, 2019 would have been that baby’s due date.

It was a strange time. So much sadness for ourselves, for the baby we would never hold on earth, but much rejoicing and comfort in the knowledge our little one was in Heaven and we would see him or her again one day.

It took about two months for my HCG to drop to zero. During that time, I went to a functional medicine doctor to see if there were any natural remedies I could be implementing to promote further healing. He ran some tests, and the results showed I have the MTHFR C677T gene mutation. Basically my body doesn’t process folic acid, which is the synthetic form of folate. Folate is essential for the growth of a baby and my prenatal vitamin contained the synthetic form in folic acid. In addition to this, the mutation has been linked to recurrent miscarriages. He put me on a MTHFR supplement, a 1,000 mg Vitamin C supplement, and an all natural prenatal vitamin with folate. He also suggested an anti-inflammatory diet, which if I’m being honest, I don’t excel at. This girl likes her donuts.

I struggled with feeling like it was my fault our baby had died. I felt defective and like I couldn’t do the one job only a woman can do. This was a lie from Satan. Leaning on my relationship with Jesus and my husband I rejected that thinking and changed my mindset. It wasn’t easy, but by being intentional with my thoughts and redirecting towards positive thinking when those negative thoughts crept in, I began to see things differently.

The moment I found out I was pregnant for the second time I was over the moon. I could hardly believe it. Jake came home from work for lunch that day. While we were eating I had him close his eyes and handed him the test, asking him to guess what it was. The cap fell off the stick and his hand grabbed the part you pee on. Opening his eyes in surprise at feeling something wet, we both burst out laughing at his shock and surprise – at both the pregnancy and the fact he’d just touched my pee.

We’re 17 weeks along and baby has a strong heartbeat and is growing! I was given progesterone suppositories for the first 12 weeks, and I’m continuing with my precious medications. We’re thankful to be past the 12 week mark and enjoying each day as they come.

Infertility has been weird and hard and good – good because God is good.

Good because God has plans for a hope and a future for each and every one of us and if Jake and I hadn’t walked this path, we would have missed out on some stinkin rough days where leaning on God and each other was all we could do. And that grew us and our faith. It reminded us we’re not in control. I’m thankful for that. I’m thankful for the blessing of carrying our first baby for 7 weeks and rejoice knowing where that baby is and who is holding him. If we hadn’t struggled with infertility I’m not sure we would have ever had the courage to pursue getting our foster care license.

Making the decision to foster was an easy one for us. We had spare bedrooms just sitting empty and love to give and there’s a lot of kiddos out there needing a safe place where they are loved. Foster care was never a runner up for us, we knew it was something we were called to do well before our infertility journey.

We got the call for placement on Thursday January 17th about 3:30 PM.  By 5:00 PM that evening he was at our door. We were excited and scared and had no clue what we were getting ourselves into. Not going to lie, those first few days were pretty rough. He pushed us to our limits and then further. He was hurting and scared and we were clueless to the whole parenting thing. I overthought it and wanted to ‘fix’ his hurting and broken places. That was overwhelming and I felt like a failure.

It took a gentle reminder from our family that only God can do the healing and that our job is to provide a stable home where he is loved and safe.

That put things in a new perspective and took a lot of self inflicted weight off my shoulders. We are slowly settling into a routine.  He is beginning to trust us and we are learning his love language and what his little heart needs. It hasn’t been easy. The days are long and Jake and I lean heavily on our faith, each other and coffee.  It’s been so worth it though. Seeing this little man heal and grow in just a week has been humbling. It’s hard knowing he could go back to his biological home any day, but we are taking the days as they come and making the most of our time with him. He is very loved.

This story was submitted to Love What Matters by Makenna Moore. Follow her journey here and here. Submit your story here. For our best love stories, subscribe to our free email newsletter.