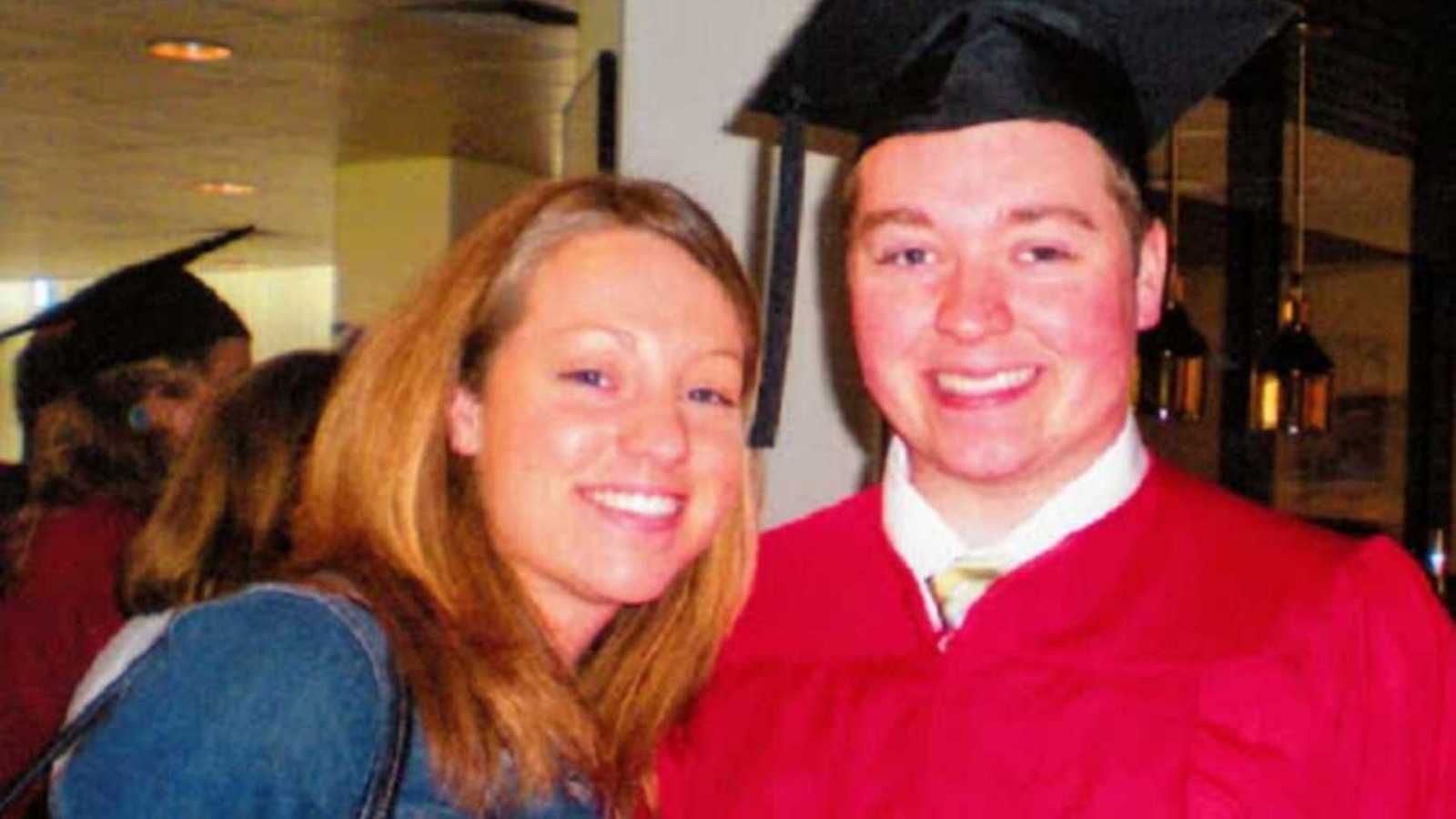 “Throughout my childhood, I was extremely active. Whether I was sparing in karate or hiking in the forest, you’d be hard-pressed to find an ounce of extra fat on me.

At age 17, I moved away to college at Boston University and my father grew sick with terminal cancer. Witnessing my hero succumb to such a horrific disease—metastatic melanoma—was debilitating for myself and my entire family.

Between the stress of being an overachieving pre-medical student and watching my father’s health slowly deteriorate, I gained the freshman 50 instead of the freshman 15. My father passed away in 2007, and I pursued my lifelong dream of becoming a physician. But I continued turning to processed carbohydrates in order to cope with the rigors of medial school, and I quickly became an emotional eater.

Chocolate chip cookies and potato chips were my stress relief. Crackers, bread, pasta, cereal, donuts—These were my anti-depressants. I have since learned that there is a reason why we turn to carbohydrates and sugar in times of stress. The brain doesn’t know the difference between a prescribed anti-depressant and a slice of Boston Cream Pie. Sugars and processed carbohydrates really do act like Zoloft and Prozac in our brains. They temporarily increase dopamine and serotonin, leading to a strong sense of euphoria and addiction.

I wasn’t just ‘overeating,’ I was addicted.

By the time I reached age 29, I had grown to a whopping 309 pounds. Not only was I a morbidly obese doctor, but I had been diagnosed with hypertension, high cholesterol, plantar fasciitis, fatty liver disease, sleep apnea, depression, and even diabetes. Something had to give. My motivation for change is the most interesting part of my story.

My sister’s name was Rachel. Rachel was a devoted, loving mother of two. She worked part time as a waitress and put her children’s happiness and wellbeing above all else. Rachel was as snarky and hilarious as she was warm and loving. Her quick wit never failed to add spark to a dull conversation. In 2016, at the age of 31, my big sister was diagnosed with a highly aggressive form of ovarian cancer.

Rachel pushed through rounds of chemotherapy, surgery, and radiation. She even endured two unsuccessful stem cell transplants, all to buy herself more time with her young children. She was holding on for one more day. As I witnessed my sister’s courage, a realization started awakening in me. If Rachel did not survive this battle, I had to be there for her children—Sophia and Henry—who meant the world to my sister and who meant the world to me. I had no choice but to be healthy.

Furthermore, in a situation that seemed to be spinning out of control, I saw one thing I could control. One thing that I had never even attempted to control before: my weight. While my sister could not control her cancer diagnosis, I could control the food I was putting in my body every day. I suddenly realized what all my years of medical school had taught me, but what—for some reason—I could not recognize in myself until that very moment.

On August 1st, 2016, I woke up and decided to change my life. I first cleared my home of every ounce of processed food. I began eating a whole foot diet of fruits, vegetables, lean meat, yogurt, nuts, and eggs. I cut out chips and cookies. I stopped munching on crackers and bread and pasta. I even gave up donuts!—the tastiest invention in the explored universe. I began tracking my calories using the app ‘MyFitnessPal’ and within a few days, the weight started to melt away. For the first time in my life, I was taking control.

My sister passed away on June 1st, 2017. That’s the day I lost my best friend. That’s the day my 2-year-old nephew and 6-year-old niece were left without a mother. That’s also the day I stopped losing weight. Heartache took hold of my entire family as we struggled to move forward from this tragedy. The death of a loved one—particularly someone so young—is not really something you get over. It’s something you must get through.

My weight began to plateau around 240 pounds, likely because stress hormones like cortisol were halting my progress. I knew I still needed to be healthy for Sophia and Henry. Although I had already made a great deal of progress, there was still a long way to go. I jumpstarted my weight loss journey by turning to something a little unconventional—a concept called intermittent fasting.

After reading a book titled ‘The Obesity Code’ by Dr. Jason Fung, I began eating during a shorter window of time every day. Typically, I would follow the classic 16:8 fast, where I only ate during an 8-hour window (i.e. 11 a.m. to 7 p.m.) every day. Outside of that window, I would only consume black coffee, tea, bone broth, or water. Fasting paired very well with my low carbohydrate, minimal processed food diet. I was able to lose over 125lbs in 18 months! I cured my high blood pressure, sleep apnea, high cholesterol, and diabetes. I’m not even considered pre-diabetic anymore!

I exercise about once per week to help maintain my weight, but this was never a vital component of my weight loss journey. I feel younger, healthier, and more confident than ever. I truly feel smarter and more clear-headed, likely because my insulin and sugar levels have dramatically decreased. We know that high blood sugar makes it harder to concentrate and think.

I am humbled and honored that so many people have been touched by my story. I became a doctor to help people. I wanted to be in a field where I could stop horrible, preventable diseases from ripping families apart. The cancer that took my father could have easily been prevented. If a physician had spotted the cancerous mole on his back sooner, it could have been removed far before it turned deadly. This is why the field of primary care—with it’s focus on prevention—was the right career choice for me.

Losing weight has given me another way I can help my patients. I have a unique perspective on lifestyle change, having gone through such a dramatic transformation myself. I find that my patients are often inspired to make change knowing what I’ve been through. When I was heavy, my weight inhibited me from fulfilling both personal and professional goals. Although I was outgoing, my weight made me self-conscious. I built an invisible wall between myself and the outside world. I became very comfortable there.

The only silver lining to my sister’s illness and passing was that it prompted my brother-in-law Jacob and I to live healthier lives. Together, we have lost a total of 240 pounds using the same dietary approach. We can now be healthy for Sophia and Henry for years to come.

Motivation to lose weight comes in many forms. For some people, it comes in the form of worsening diabetes that requires insulin injections. For others, it comes in the form of a financial hardship or the loss of a family member. I had to make a complete lifestyle change in order to be healthy for my family, my patients, and myself. When my father was diagnosed with cancer, I ate my way to obesity. When my sister was diagnosed with cancer, I reacted differently. Rather than succumbing to food, I changed my life for the better.

It might seem dramatic to rip through your kitchen, disposing of every single bit of processed food. But fortune favors the bold. If there is one thing I learned through this process, it’s that success is all about choice. Choose better. Choose wisely. Choose to love yourself. Once you find that incredible reason to make a change… Hold on to it. Commit to it. And never look back.”

This story was submitted to Love What Matters by Dr. Kevin Gendreau of Fall River, Massachusetts. You can follow his journey on Instagram. Submit your own story here and be sure to subscribe to our free email newsletter for our best stories.

‘I was 253 pounds. My stomach rested in rolls on my hips like a pile of dough. I was disgusted with myself.’: Man loses nearly 100 pounds, claims ‘potential is limitless’ if you overcome ‘fear and excuses’