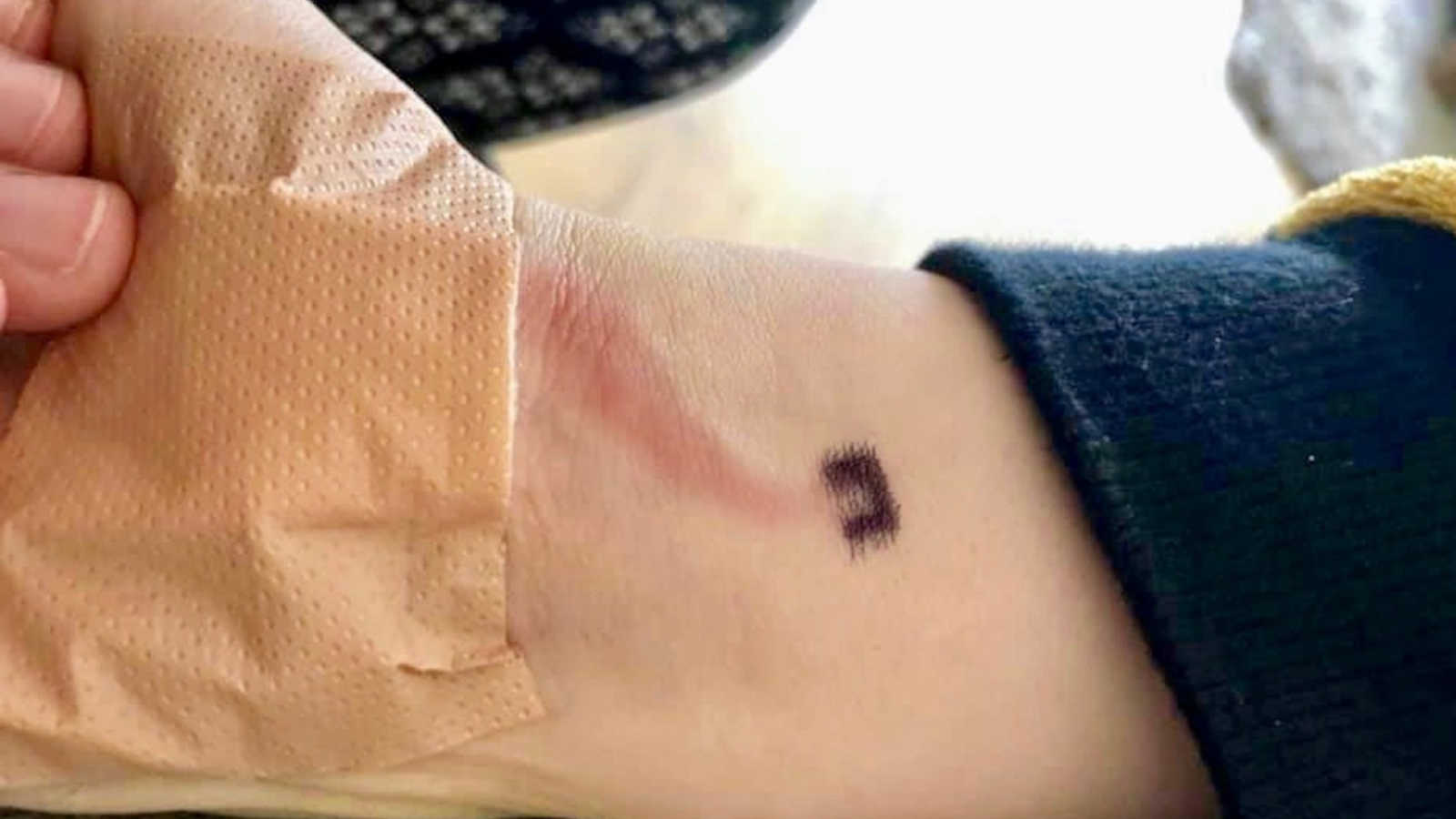 “I’ve been in two minds whether to post this, but my husband convinced me as he said if I hadn’t been here, he wouldn’t have realized. I am sure there are other parents who wouldn’t either and the only reason I knew is because it had happened to a friend’s son two years ago and she had shared.

A week or so ago our littlest fell over at the zoo. He took quite a bashing, but once we got home, I cleaned him up. I called the school on ‘Farm Day’ to make sure he washed his hands after digging and I tried hard to ensure it was kept clean (hand and elbow). He’s an 8-year-old boy, however.

The wounds didn’t look infected- they’d gotten bigger, so I was concerned, but they weren’t gunky, etc. Yesterday on our way to the beach he showed me his hand. I wasn’t happy as I noticed red tracking down his vein. I then checked his elbow – the same. I took him down to the out of hours feeling a bit silly, but when the doctor saw it, he commended me on recognizing it and getting down ASAP.

This is blood poisoning/sepsis. It isn’t something you can ‘leave’ until Monday when the doctors are back in the office. Thankfully the antibiotics are working, and he is well in himself! If you spot this red line running from a wound along the vein get yourself/your child seen straight away. Hopefully my post might help someone the way my friend’s post from two years ago helped me.”

This story was written by Alexandra Ruddy. The article originally appeared here. Submit your story here, and be sure to subscribe to our best love stories here.

‘It is one of the top 3 reasons young children are in the emergency room during the summer.’ Mom’s slide warning

‘I was watching her sleep next to me and realized it didn’t look right. I unbuttoned her and this is what I saw.’ Mom warns about the 1 cold symptom you shouldn’t ignore

‘It has been a rough couple of weeks for Mason due to one TINY LITTLE FREAKING TICK!’

“I was usually good at hiding my bruises, but one day I didn’t do a very good job. ‘How did this happen?!’ my teacher asked. I told her it was from carrying firewood. Minutes after I got home, there was a man in a tan suit at my door. CPS. The beginning of my journey across 40 foster homes. I feel so lucky to have beaten the odds. Not for me, but for my sons. I’d go through my childhood 1,000 times if it meant my sons didn’t have to.”

‘He moved in with us. Soon, he went from the couch to the bed. We realized our marriage wasn’t complete. HE was missing.’: Triad has 8-month-old, ‘Thanks to our son, we stopped hiding’

“It wasn’t possible to sign 3 parents on the birth certificate. At the moment, polygamy is illegal. We needed to step out of the shadows and do the coming out. Thanks to him, we stopped hiding.”

‘Can I visit?’ My heart erupted. Her adoptive parents told her to choose between them or us, no negotiation. They turned their backs on her.’: Mom re-adopts daughter she gave up 18-years prior in ‘beautiful, unexpected reunion’

“I kissed her on the forehead and whispered, ‘I will always love you.’ I wondered if I would ever see her again. While I reveled in my three biological sons and one adoptive son, my thoughts often wondered back to her. I couldn’t take care of her at birth, but now I can.”