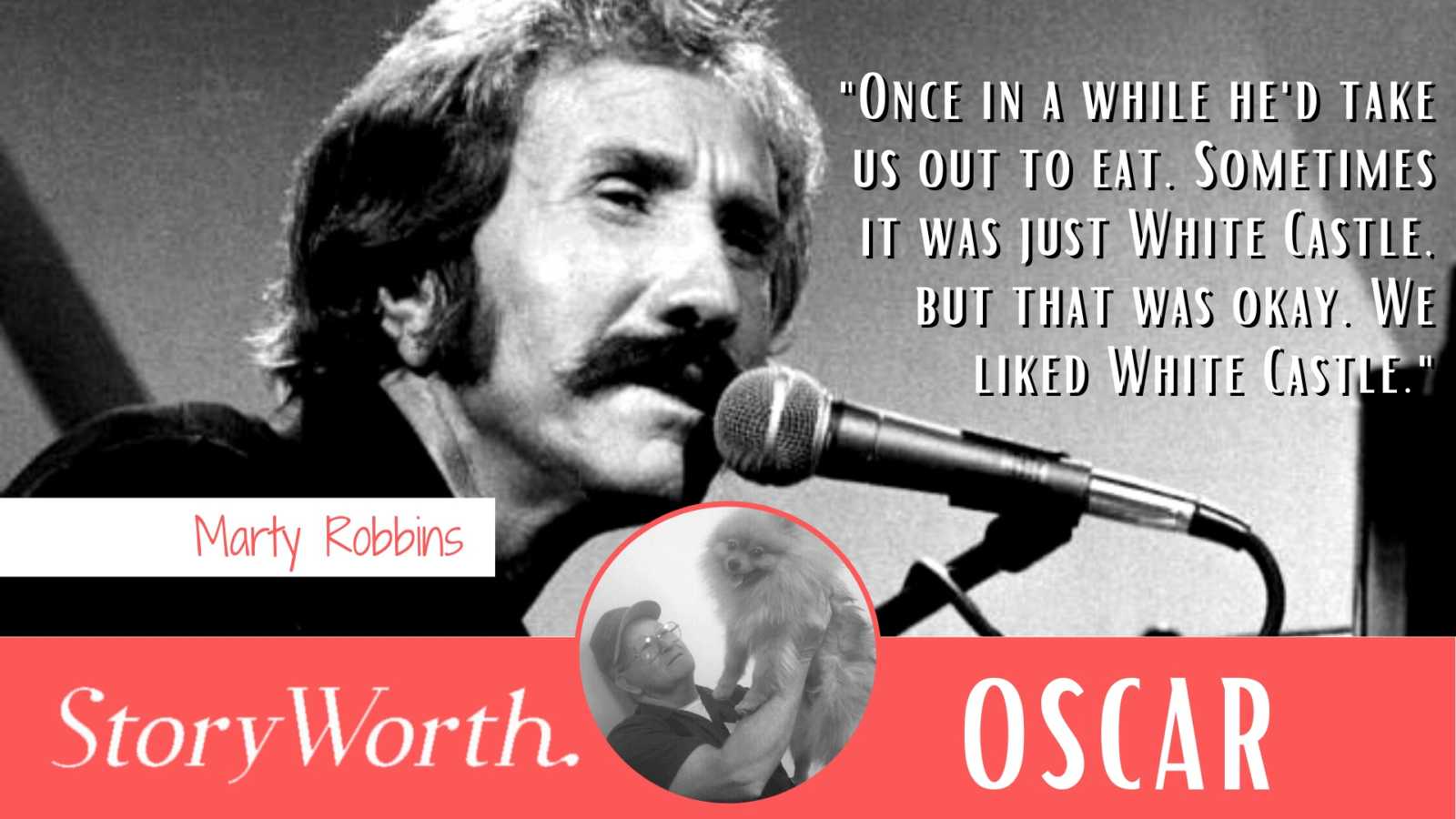 Oscar’s story is part of an ongoing collaboration between Love What Matters and StoryWorth, an online service that makes writing your loved one’s memoir (or your own)  as easy as writing an email. Click here to learn more about StoryWorth and begin capturing your loved one’s lifetime of memories to cherish forever.

It was 1959 and I was in college at Lipscomb University in Nashville, TN. It had just turned into winter and the weather was kind of lousy. The weather in Nashville… when it’s cold, it’s colder than anywhere else. A friend of mine from Alabama and I decided to go to uptown Nashville on Saturday. We were wandering around admiring the city, and got to this huge building that was just beautiful. We wandered around to the back of it and there was a lovely fire escape, hanging down just within reach of us. I looked at him, he looked at me, and we both looked up and said, ‘Yeah, let’s do it.’

I was short and couldn’t reach the ladder so he went first. We scrambled up that building like a couple of squirrels and we were having a blast. We got up about five or six stories and heard someone holler, ‘Hey you, get back down here!’ We looked down and discovered there were about seven or eight cops doing the yelling.

I said, ‘You reckon they’re gonna kill us?’ My buddy said, ‘I’m not risking it, I’m going on up.’ So we went up another five or six stories and the cops were getting angry. My buddy found a window that was unlocked and we climbed in. Well, it just so happened we’d climbed into a ladies’ restroom. And it was occupied. There was lots of screaming and shrieking and we didn’t know what to do.

About that time, a man poked his head in, looked around the door, and said, ‘What’s going on in here?!’ My buddy said, ‘We were climbing the fire escape and there are cops yelling at us so we got scared. We didn’t know what to do.’ The man said, ‘You guys come with me.’ We didn’t have many other options, so we went with him.

He introduced himself as Marty Robbins. He was doing a show in a radio station beside the ladies’ restroom. He took us in the studio with him and we sat there. The cops were searching the whole building by that point. They came to the station and said, ‘We’ve been looking for these boys!’ We thought for sure they were going to arrest us. Robbins looked at those cops and said, ‘These boys have been with me since 8 a.m. this morning, they can’t be the ones you’re looking for.’

We stayed at that radio station with him all day, and he gave us a ride back to campus that night. After that, there were many weekends we spent with him. Once in a while, he’d take us out to eat. Sometimes it was just White Castle, but that’s okay, we liked White Castle.

We saw him perform at the Ryman Auditorium. We had free tickets, which was good because we were poor. He was just a nice guy. He wasn’t much older than us, about seven or eight years older. We introduced him to some of our college friends. We’d get together and sing ‘El Paso.’ There’s been a soft spot in my heart for him ever since.”

‘My kids were eating breakfast when I heard a knock. A sheriff’s deputy greeted me. ‘Your husband’s been killed.’ My world came crashing down.’: Widow talks turning grief into a positive thanks to StoryWorth

‘As a teenager, I didn’t appreciate my grandparents like I should have.’: Woman shares appreciation for grandparents thanks to StoryWorth, ‘I’m so lucky to still have them in my life’