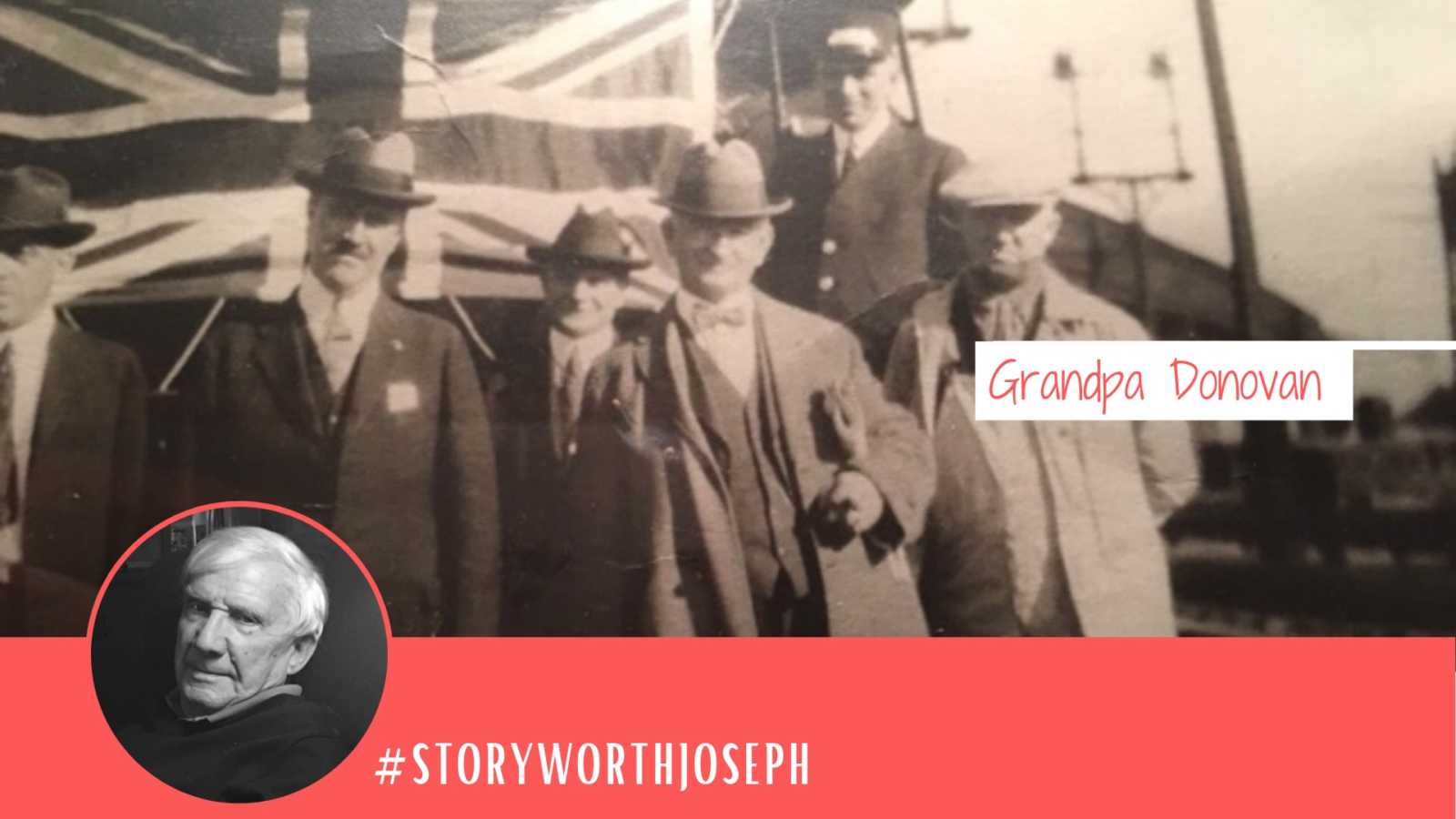 Joseph’s story is part of an ongoing collaboration between Love What Matters and StoryWorth, an online service that makes writing your loved one’s memoir (or your own)  as easy as writing an email. Click here to learn more about StoryWorth and begin capturing your loved one’s lifetime of memories to cherish forever.

“My grandparents on the Gravel side lived in a farmhouse in Dayville, CT. There was a lot of room to run around there. My grandmother, Marie Louise, was very outgoing and very sweet. My grandmother used to make pies and sell them. She always had a half dozen state kids around under her care, that she had taken in to bring in a little money. She was the main breadwinner in the family. She was very loving and very hardworking.

My grandmother had the first colostomy ever performed in Boston!

My dad’s father, Alcide, was like a ghost; you never saw him. He had a workshop in his garage, and he pretty much stayed out there smoking a pipe and making lawn ornaments. He didn’t have a job other than making those lawn ornaments. My memory is that he didn’t talk to anyone. I can’t remember him ever being with others; just alone all the time out in the garage.

Even though my memories of my grandfather are that he never spoke to anyone, my dad said his father was a big bullsh*tter. He said his father would go down to the corner, smoke, and BS with others.

On my mother’s side, Grandpa Donovan was an outgoing, sweet guy. He was like the mayor of Putnam: very popular. He knew all the dignitaries. He was a train engineer. Because of that career, he had a lifetime railroad pass. When his granddaughter Andrea graduated from college, he wanted to take her on a railroad trip across the country, but she refused. He couldn’t understand why she wasn’t interested in that trip.

When Grandpa Donovan retired, he had a pension from the railroad of $127 a month, which he lived on. When he moved in with his son later in life, he was proud to say that he gave his monthly pension to his son, thinking that helped a lot because they had six kids. Those were the Donovan cousins: Andrea, Wayne, Sean, Matt, Libby, and Marian. Grandpa Donovan used to take the train to Norwich quite a bit. When he got off the train he always got a box of cigars.

Grandmother Donovan, Elizabeth, maybe should have married Pepe Gravel rather than Grampa Donovan because they were two of a kind. They were not friendly. I didn’t see much of her so I do not have many memories of her. They lived in Putnam on Main Street so there was no place to play there when we visited them as kids.

Grandma Donovan didn’t like my dad, her son-in-law. She was a little bit of a snob and felt like her daughter had married beneath her. The Donovans were Irish and my dad was French and uneducated, having only gone to school until the third grade. My dad quit school and got his first full time job at age nine, washing floors in a convent. He needed to make money to help support the family. (His dad wasn’t making money — he was out in the garage making lawn ornaments.) Then, at age 12, my dad went to work in a sawmill, logging.

Articles from the newspaper written about the Donovan family said that all the neighborhood kids loved to go to the Donovans’ house. So perhaps my sense that my grandmother was not very nice is mainly because she didn’t like my dad.

I was 11 when my mom died, and a few years later, my dad’s mother came down to watch me. My dad was working around the clock and they thought I might be smoking and they thought she could help me. French was her first language but she did speak English too. She was too sweet, and she was easy to put things over on. For example, I used to skip school often. She would say, ‘Joe, no school today?’ I would say, ‘No, I guess the boiler broke down.’

My grandmother believed anything I told her. She was not a disciplinarian! I’d get on my bike, ride to Washington Street, have a few Camels, then go to Beebee Dairy for lunch. My grandmother would say, ‘Joe, you’re home early today.’ I would say, ‘Yeah, they let us out early!’

My grandmother lived with us for a couple of years. She moved in well after my mom died, probably around the time when I was starting high school. She stayed until Buster got remarried. When that happened, my grandmother moved to Spencer MA, to live with her other son, Nelson. When she got really sick and needed care, Buster brought her back to Norwich, but my step-mother said she couldn’t stay with our family, so they put her in Myrtle Rivers Rest Home, and she died soon after.

At my grandmother’s wake, Buster was speaking in French to many who came to pay their respects, and my brother Bob and I couldn’t understand what they were saying, because we grew up speaking only English. People used to be afraid that their kids would end up with an accent, so they would not speak their native language in the home. French was their native language — Buster never went to confession speaking anything but French.

My grandfather was devastated later in life when he learned that Joe Donovan, his youngest son, a State police officer, had become an alcoholic.

I had a catering appointment one night in the area where my uncle Joe lived so I stopped to see him. He didn’t have any kids. His wife Paria answered the door. I asked, ‘Is Uncle Joe here?’ She responded, ‘Well, he is and he isn’t. He might have gone to the store.’ She had packed him into the bedroom because he was drunk, but I didn’t realize that until much later.

Mom and I brought Grandpa Donovan up to visit his son Joe one day, unexpectedly. Joe yelled at his wife that there was nothing to offer their guests to drink, and she said he could share what he was drinking. He was drinking straight alcohol and it looked like there was enough in his glass to have served ten people. So Grandpa Donovan was very upset to see his son as an alcoholic. He got up and walked out, saying that he needed to take a walk. He went to the end of the driveway, pacing back and forth until Mom and I went to leave and picked him up. We felt very guilty about having brought Grandpa Donovan there.

When Grandpa Donovan was 93, he decided he had lived his life and he didn’t want to live anymore. He went to a convalescent home, and died within a month.”

‘The cop opened the trunk. Jack quickly put his hands up. ‘Don’t shoot!’ There, in the trunk, lay my friends.’: Man reminisces on the old days with his true friends thanks to StoryWorth