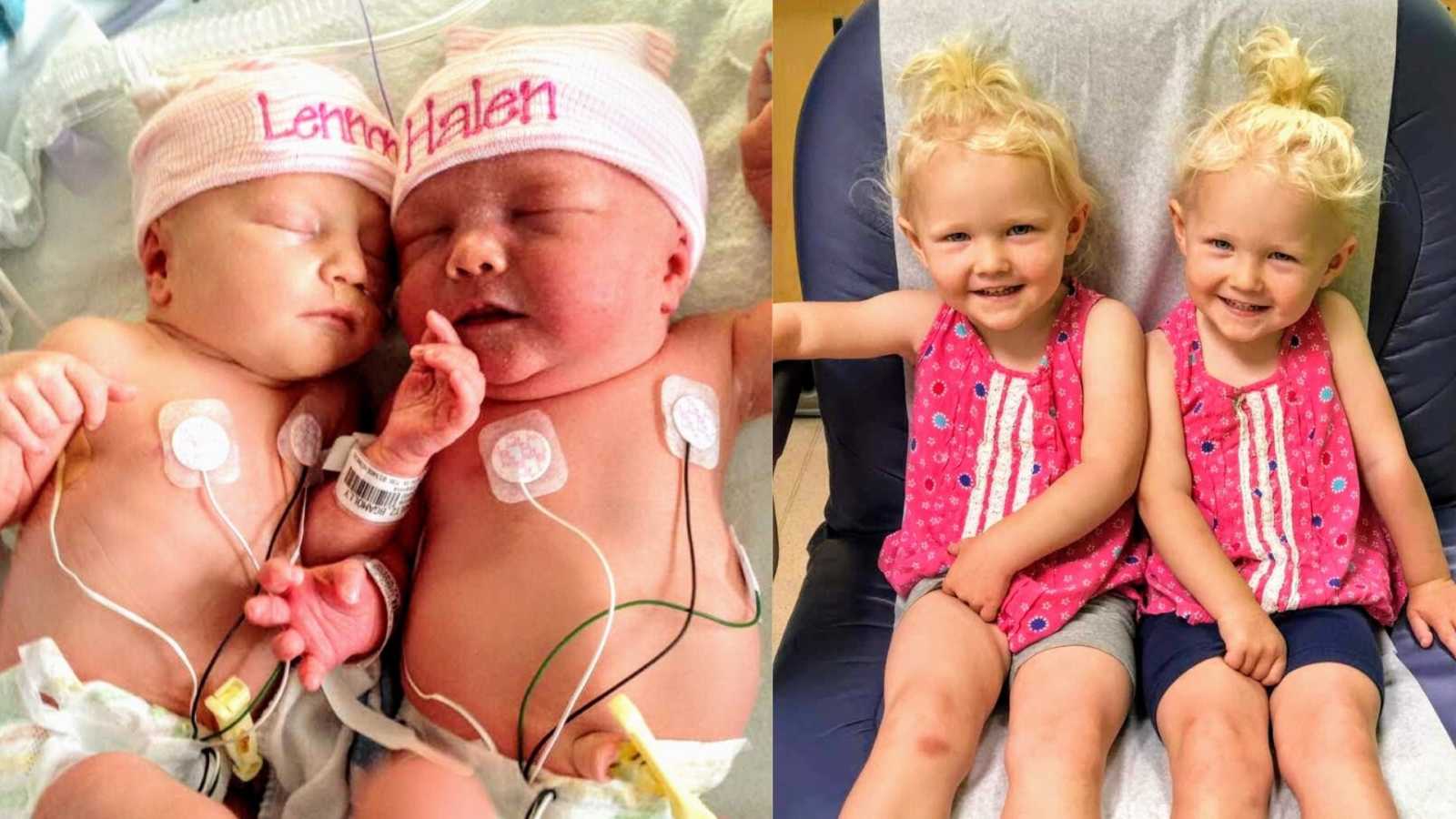 “When I found out I was carrying identical twin girls, my mind immediately took me to how much they’d be alike. With the same DNA, they surely would enjoy the exact same things, do things at the exact same time, and in general, just be the same person split into two separate bodies. I mean, that’s basically what I thought identical twins were. I had no idea of the world I would be thrown into.

When our twins were born at 36 weeks, they had Twin-to-Twin Transfusion. Essentially, our baby twin B, Halen, took most of the nutrients from twin A, Lennon. They were almost two pounds different in weight at birth, and one was much paler while the other was more red. I asked the doctor when they were born, ‘Are you sure they’re identical twins? They look nothing alike. I think you guys misdiagnosed them!’

Even though Halen took all of the nutrients, she was actually the sicker twin. She needed more attention than her sister did. But it’s almost like Lennon knew her sister was going to be cooped up in the NICU for a few weeks, so she decided to do what she had to to stay. She was totally ‘fine’ at birth. But by the end of that first day, she could no longer keep her temperature stable, nor could she keep up with eating.

So, she booked herself a stay in the NICU for the exact same amount of time her sister did. They came home on the same day. It’s sort of crazy how that worked out, considering Halen had many more issues than her sister and on paper should have stayed longer.

Over the next few weeks, I would scroll through social media, admiring all of the babies my friends were having. When these babies would start doing things my babies couldn’t do yet, I had to keep reminding myself mine were premature and just needed a little extra time. It was hard not to compare them, as these posts were flooding my news feed day in and day out.

I started to feel like maybe something was wrong with my babies, even though I already had two other children! I had been through this before. I knew every baby has their own timeline. Yet, there I was…worrying my little twins were going to be behind.

Then something really funny happened in our own home. Halen rolled over. She rolled over four times in one day. It was surprising to me, since she was the underdog in this whole thing, being born sicker than her sister. I had this notion in my head that, if anything, Lennon would do things a day or so before her sister.

But Lennon didn’t have a single interest in rolling over. In fact, it took her TWO weeks to roll over. The whole time I was shocked. They were identical twins! Sure, they were born very different…but still, they’re identical! They’re supposed to do everything together.

So now, instead of comparing my twins to other babies, I was comparing them to each other. I was comparing my babies with the same DNA sequence to each other. How could one be so different than the other? How could one do anything earlier than her sister? The science didn’t make sense to me! They’re the same! Literally down to the order of their nucleic acids. Surely their genetic code had the same markings for physical development. Yet here we were, watching them develop at different times. It was mind blowing to me, as their mom.

I learned a big lesson in identical twins through this: same DNA, different souls.

Their souls are different. They each have their own timeline. They each have their own likes and dislikes. They are their own person, despite looking alike and scientifically being the same. But the spirit powering their bodies is as unique and as original as you and I. Just because they are cut from the exact same cloth, doesn’t mean the little machine inside their brains is the same. It took having them to teach me children are all genuinely different. It really isn’t just a saying. It’s the absolute truth we all sincerely need to remember.

They just have their own identity.

Today, Halen can write her name. She’s been able to write the letters of her name for about a year. Lennon? That girl has zero interest in writing her name or learning how to spell it. She’d rather be out in the soccer field, out-scoring all of the boys.

Halen is empathetic, sweet, and gentle. She could sit down and color, do puzzles, and read books all day long. She lives for structure and being given little tasks. She loves helping to clean or do dishes. She wants to be of service to everyone she can. She plays by the rules and doesn’t stray from what she’s ‘supposed to be doing.’ Her little inner radar starts beeping when anyone isn’t following the rules. Her feelings get hurt when people are mean or don’t want to play with her. She’s very sensitive and conscious of those around her.

Lennon has a sparkle in her eyes that only resembles the truest form of a free spirit. You can see it in her mannerisms, and you can constantly see it in her personality. She doesn’t take anything seriously at all, and she is happiest running around doing her own thing. She can’t be confined to a box, and she enjoys the freedom to explore the world in the way she sees fit. She’s totally a roll-with-the-punches child. If someone doesn’t want to play with her, she shrugs her shoulders and moves on. If someone is mean to her, she will spit it right back. She has a no-holds-bar approach to those around her.

With those explanations, you would think they were just sisters. You would never truly think I was describing a set of identical twin sisters. They are so different from one another.

And so is every child.

It’s makes you think of nature vs. nurture. How much of our children’s personality is just based on who they are, down to their true, authentic self? How much of it is based on their environment? I can tell you one thing: from my experience, it seems our babies come here with a lot of their character already tied into them.

So, the next time you feel yourself comparing your child to someone else’s, just remember even my identical twins are very different.”

This story was submitted to Love What Matters by Molly Schultz of Tried and True Mama. You can follow her on Instagram. Submit your own story here and be sure to subscribe to our free email newsletter for our best stories, and YouTube for our best videos.