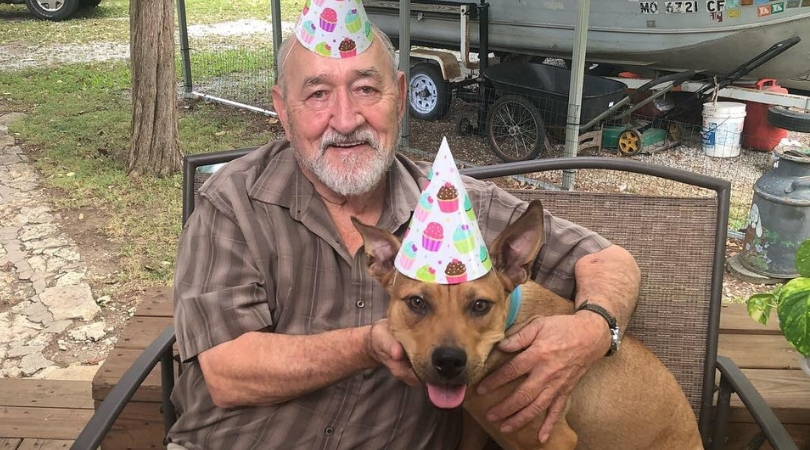 “I’d like to share with you a story about ‘my’ dog, Sloan. And it’s a long one. Sloan was surrendered to me a year ago, with her huge ears and even bigger eager-to-please heart. I didn’t name her for 3 weeks after getting her because I planned on fostering her, and we all know you don’t name the puppy you’re not keeping. She was dropped off at a friend of mine’s fire station and I agreed to give her a trial run. I ended up taking her to the pumpkin patch where a little kid asked her name. I responded, ‘Welp. She doesn’t have one yet.’ He was excited to tell me he’d like to be the one to name her and that he had the perfect name for her. His middle name: Sloan.

Sloan’s been an absolute gift to my life, and she’s equally been a terror. She’s chewed up and completely destroyed over 20+ comforters, chewed her way out of her kennel to a point of it needing zip ties, picks on my old doggo, Roman, all day every day, has gotten into the trash and strung it all over the house and yard countless times, demolished a couch, jumped the fence and ran and got into the neighbor’s car while they were unloading groceries and refused to get out until I came to get her from the (thankfully) hysterically laughing  family across the street, upwards of 15 minutes later. You know. Dog stuff. Separation anxiety stuff. Sometimes in life we have to make sacrifices we don’t want to make. The hard ones. The ones that keep us up at night with that lump in our throat. I made one of those sacrifices. I’ve found myself biting off more than I can chew, and I’ve had hard time admitting that. I’m a saver, with a heart meant to be a dog-mom.

Sloan recently discovered she is athletic enough to jump my fence. Somehow, someway, with the help of several Facebook groups and caring neighbors, she’s always found her way back home in less than 30 minutes or so. She’s friendly, she’s a free soul. Well she jumped the fence, but this time was different. She was gone for over 39 hours. I worried. I went to KC Pet Project looking for her. Paced the neighborhood for hours. Praying and hoping that she was safe. That someone just let her in and that she was happy and unharmed and in good hands.

I was reunited with Sloan this evening with the help of Facebook, friends, and an app called Nextdoor. A man contacted me and told me his elderly neighbors had her and gave me an address. I show up and found a grump of an old man and a lady rolling her eyes and whispering how upset he was that, ‘She was right.’ That someone was missing this dog and that they would show up looking for her eventually… the old man came out carrying a bag of dog food, a leash, and I noticed a different collar on her, that they’d purchased. I thanked them and told them how much I appreciated them taking her in and that the world needs more people like them. He asked me what her breed was, told me how lucky I was to have such a dog, and that I’ve done well bringing her up. He told me that ‘she looks into your eyes like a human and really listens to what you have to say,’ and that, ‘She took over their bed and made it her own.’

I talked with the couple for about 30 minutes and we shared some good laughs. They both talked about how much fun they had with her. He refused to let me compensate them for the items purchased. All the while I’m thinking to myself how busy of a person I am, as a business owner who often works lengthy hours. How this dog deserves the attention they’re craving to give her. I sucked back my tears feeling as if I wasn’t doing the right thing by taking her back to my house, where she competes for attention and I said, ‘I would hate to make any impulsive decision right away, because I am absolutely ecstatic to be reunited with Sloan again, but I will do some thinking and if there’s ever a time that I feel she needs to be rehomed, I’ll be in touch,’ and handed them my business card.

This old man went from sad and distant to completely lit up. He said, ‘We would take her in a heartbeat, we were really hoping that no one would come after her.’ He mentioned if she ever needed some company or a place to come by, she was welcome at their home anytime. And mentioned, ‘We’ll be here waiting! We’ve lived here for 57 years!’ Upon saying goodbye, I hugged the old lady and thanked them again. Then the old man said, ‘I’ll take a birthday hug! It’s my 80th birthday tomorrow!’ Little does he know that after a midnight trip to Walmart, Sloan’s bags were packed and ready for a new adventure. Sloan and I surprised Bob, for his 80th birthday, with the gift of Sloan.

Upon arriving, Bob looked confused, thinking I was just coming by to say happy birthday. I explained to him that all I needed was last night to think, and that I’d like him to have Sloan under 3 conditions: 1. I get to come over for coffee and take Sloan to the dog park now and again. 2. He has to take a happy birthday picture with her. 3. If and when life throws them any kind of curveball, and they feel as if they can’t handle her, temporarily or permanently, he has to promise to call me so I can have her back. He had no objections. Bob said, ‘You know, I don’t have many friends left. I’ve done outlived them all, this is the best gift I’ve ever received.’ He was overwhelmed with emotion, as was I.

We shared more laughs and briefly celebrated Bob’s birthday before they had to leave for a birthday dinner, by tossing some toys around for Sloan in their beautiful 3 acre fenced in yard. The smile on Bob’s face was contagious. Almost as if he had a new purpose in life.

Admitting that someone is more adequately cut out for something than you are, is never easy. Understanding that sometimes you have to let them go in order for them to grow, is the hardest part. The smile on both of their faces made it all worth it. Sloan found her people. My job is done. She was never really mine, we just became friends upon crossing paths.”

This story was submitted to Love What Matters by Jordan Cordova, 25, of Kansas City, Missouri. Submit your own story here, and subscribe to our best stories in our free newsletter here.