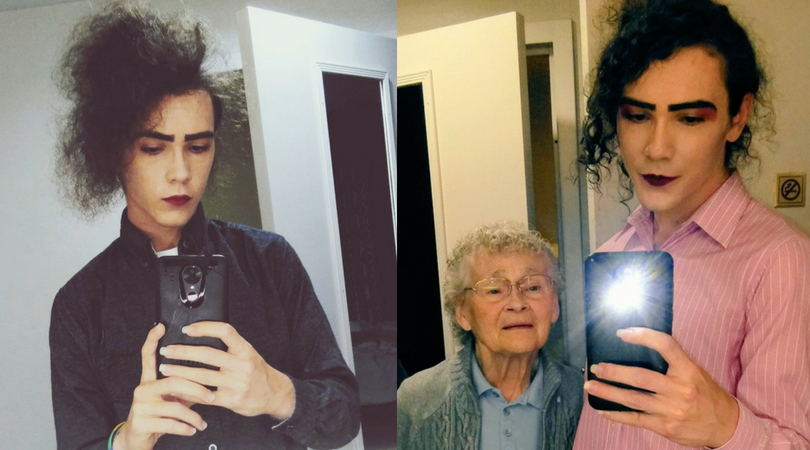 “Ever since I could tell gender exists, I think as far back as when I was four or five-years-old, I remember identifying more as a girl than a boy. I knew growing up that I didn’t feel comfortable being called a boy or being put into ‘boy’ categories. It sounds confusing to my family members to hear me describe this, but there are everyday examples: Shopping for clothes never felt right. I liked the gender-neutral presents I received on Christmas more than the decidedly ‘boy’ presents. I always wanted long hair and hated getting my hair cut. Most of all, I hated being told to act like a man. Only recently, when I took my first opportunity to really think about why this was, I realized I felt this way because I’m not a man — I’m a woman.

My family is very socially progressive. My grandparents are devout Catholics, but their religiosity is about gratitude, humility, and compassion, not uncritical loyalty to traditionalism. I’m not the first person in my family to come out as LGBT — though I am, as far as I know, the first to come out as a trans woman — and everyone who’s come out so far has been accepted. When I came out as bisexual to my family, four years ago now, they all accepted me. But coming out as trans is something else entirely. I knew my grandparents would still love me, but I wasn’t sure whether they would really understand what ‘transgender’ means. I wasn’t sure whether they’d hear ‘I’m a woman’ and sincerely believe that. Would they be able to understand the difference between me, a woman who was assigned male at birth, and a man who simply likes wearing makeup and feminine clothes? Would they respect my pronouns and be willing to use a new name for me, after knowing me as Elijah and referring to me as he/him/his for twenty years? I wasn’t sure they would believe me or accept that as the truth of who I am.

However, when I came out to my mom, a few weeks ago, she immediately believed me and accepted me, and that gave me the confidence to come out to the rest of my family.

I’ve been trapped in an abusive relationship and struggling to find a safe home for over a year now, and I was telling my family as little as possible so as not to worry them, but now that I’ve mostly escaped that situation and I’m not as housing-insecure, I decided to tell them the whole truth — to include the truth about my identity. I’ve almost died a few times this past year, and that really puts things in perspective: I was horrified that I might die and be remembered as someone other than my true self.

Moreover, my granddad died in January. I never came out to him as bisexual, let alone trans. My mom knew he wouldn’t accept that I was bi, and I decided that my relationship with him during his final months was more important than asserting my identity. This is a sacrifice many, many LGBT people are forced to make. But it saddens me that he died never knowing who his granddaughter is. For her age, my grandma is in excellent health, and I didn’t want the same to happen with her.

So, really, on two different counts — my own and my grandmother’s — I knew I had to come out to my family, sooner than later. My grandmother lives in Maryland and only visits Florida to visit with us two or three times a year, so I decided it needed to be this visit, whether I was ready or not. In retrospect, I honestly wasn’t ready. I’ve only just started my transition. I’ve only been using makeup for a month or so and I have a few feminine clothes, but, otherwise, I haven’t been able to afford hormones or anything else, though I hope to begin those stages as soon as possible. I’ve recently been concerned with basic needs. In short, I wasn’t ready to ‘present’ as a woman in a way I felt would be believable to my grandmother or my dad. But I went ahead and did my makeup and came out nonetheless, because, I figured, if they loved me, they’d be able to see me as a woman, as my true self, no matter what I look like.

My grandma’s acceptance of me was one of the happiest moments of my life. She is beyond gifted at writing and she’s one of the wisest people I know, and I’ll always remember her beautiful words. It’s difficult to capture the effect of what she said in 280 characters, but I tried. She’s my hero and I love her. I suppose I’m glad the internet fell in love with her too, even though she doesn’t like attention. More than that, I’m grateful for the hope she’s inspired in so many trans people, simply by unconditionally loving her granddaughter.”

This story was submitted to Love What Matters by Leah Hintz 20, of Florida. Do you have a similar experience? We’d like to hear your important journey. Submit your own story here. Be sure to subscribe to our free email newsletter for our best stories, and YouTube for our best videos.

‘Her mom came to parent-teacher conference with weary, troubled eyes. ‘Has she asked you to call her by a different name yet?’: Christian teacher’s ‘heart softened’ after she learns her student is transgender

‘We kept our relationship a secret. I never even told my kids about my transition.’: Transgender man details struggles, ‘If I hadn’t chosen the path I’m on, I wouldn’t have been led down this road to parenthood’

‘She said, ‘I am a girl in my heart and brain.’ She had to be physically restrained for haircuts. I felt guilty.’: Mom advocates for transgender daughter, ‘She blossomed before our eyes’

‘I’m not a princess!’ I tried to figure out who I was. I couldn’t back away from the truth. Finally, I looked in the mirror and said, ‘I’m a man.’: Transgender man details journey, ‘It was a release’