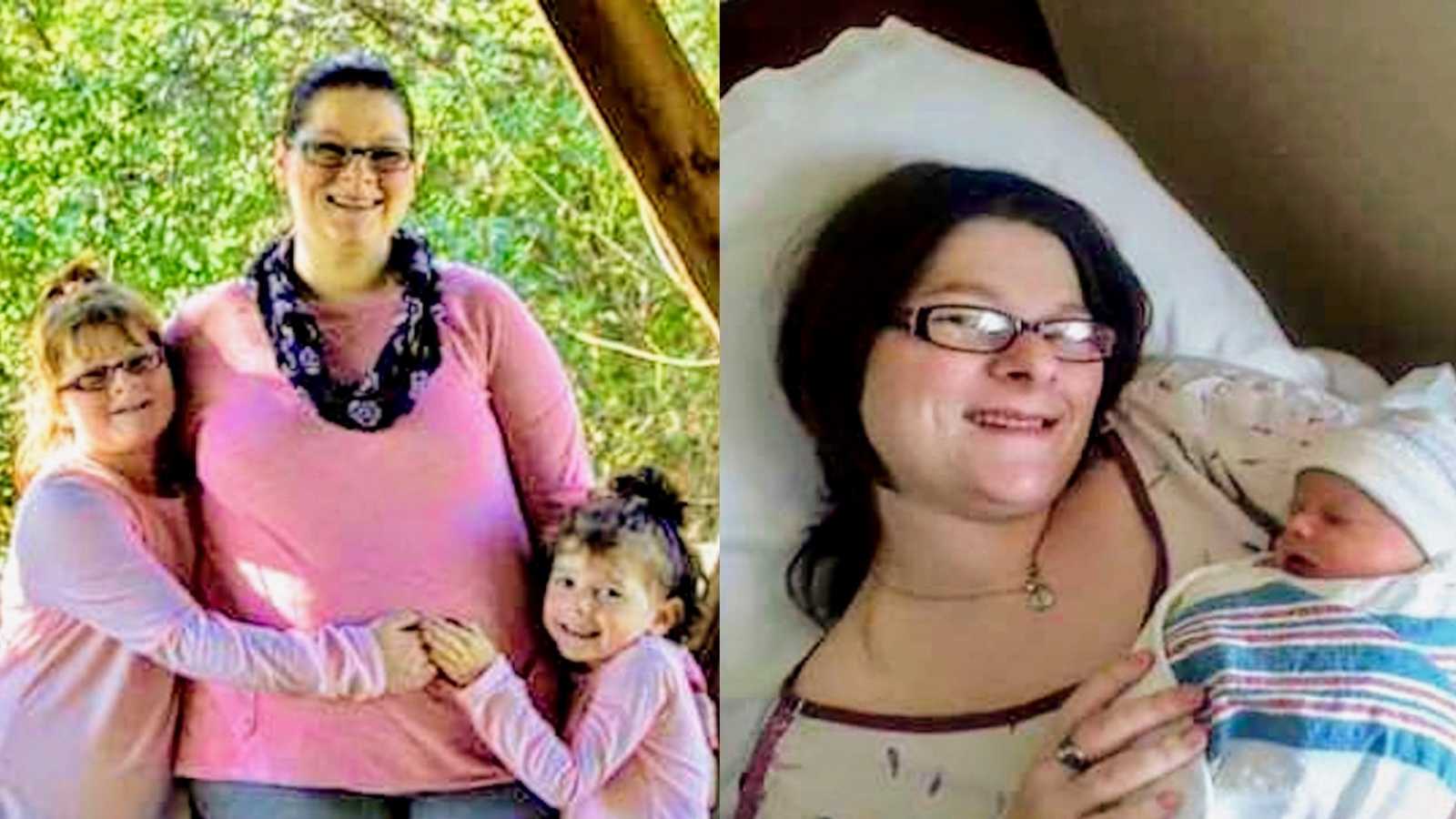 “After a year of trying, Jeremy and I received the news we were expecting our second child. We were over the moon excited. We were finally going to give Jamee a blood sibling and give Cameron another half sibling. My pregnancy went pretty smoothly. I had the typical issues, morning sickness, constant hunger, and being tired.

Then the end of September everything changed. I spent at least one day a week leading up to delivery in the ER. I felt awful. I knew something was wrong. I was constantly told everything looked fine, and was sent home, even with my insistence that something was wrong with me, not the baby. This continued until delivery. On November 25, 2013, we welcomed our new baby girl into the world. She was perfect, and we felt like everything was fine, even though I was dealing with blood pressure issues and some minor (or so we though) light headed moments.

I was discharged five days later. I spent the weekend at my mom’s since I had just had major surgery (I delivered via C section) and my husband had to work. We finally went home on December 1. We went about our day as normal, I posted photos of our babe on social media for friends and family to see, we had dinner. It was an overall normal day. We never would have guessed that when we went to bed that night, our lives would change the next day.

On December 2, my oldest daughter entered the room, as she had every morning before, to ask for breakfast. As she slammed the door open, that’s when it happened. I started seizing. My husband sent Jamee to her room to get dressed and moved Isabella from the bed (I had fed her about an hour before) to her bassinet and he called 911. He stayed on with them until he heard the sirens then told the operator he had to hang up and call my mother. As he explained what was going on my heart had stopped. From the time the EMTs worked on me in the house to the time they got me to the hospital I was down for 17 minutes. They would get rhythm, but not enough.

My mother beat my husband to the hospital. They sat in the waiting room for almost an hour before someone came and told them that I was in ICU and to prepare themselves. I was in a medically induced coma and had several tubes. They still had no idea what was going on. For three days it was touch and go. They did multiple tests, cooled my body down, then warmed it back up, then on day 3 after I showed progress, they brought Jeremy in the room to test my brain function. They lowered the propafol, the meds that induced my coma state, and had Jeremy come in the room to ask me questions. ‘Do you know where you are?’ I shook my head yes, I knew I was in the hospital, ‘Do you know who I am?’ Yes, I nodded, and grabbed his wedding band, ‘Do you know who Lisa and Jerry are?’ Again, I nodded yes, I recognized my parents’ names, ‘Do you know who Jamee and Isabella are?’ I couldn’t recall. The names seemed foreign. Jeremy left the room and later that evening I coded three more times.

Tests were redone and rushed and then finally, after three grueling days, my family finally got answers. I had a heart condition called Long QT Syndrome, or LQTS for shorts. It’s a condition that attacks the hearts rhythm. When Jamee entered the door that morning and it hit the wall, it startled me and caused my heart to race, however, my natural pacemaker in my heart couldn’t get my heart back to normal beats. I was sent back to surgery to have an ICD, Implantable Cardiac Defibrillator, placed. We weren’t out of the woods yet.

Forward to 24 hours later. I had woken up, in a weird place, with no memory of how I got there or what happened. I coughed the breathing tune out. The first thing I noticed was how sore and dry my throat were, then it hit me. This is not the hospital I delivered my daughter in. My husband told me what had happened, and the doctors were there to explain everything. I was terrified, but relieved to know that what others had though was me just being a hypochondriac, was not that at all.

I would soon realize I had little long-term memory and had some issues with my speech. All minor since days before, the doctors had told my family to hope for the best but prepare for the worst. They truly though I wouldn’t wake and if I did, I’d have no movement, no speech, or would be vegetative.

I worked my butt off in therapies and finally returned home TEN DAYS after my heart stopped. I wanted to be home before Christmas and I was. I was a walking, talking miracle, or that’s what I kept hearing.

I had so many mental health problems from this experience and had a hard time getting back into my mom role. But I knew I was alive. I knew I got more days with my family. The device in my chest, however annoying, was saving my life.

To this day, I still don’t have all my memory back, I slur some of my words, forget the name of objects, and deal with mental health issues, but I am here. I have a husband who is my hero, four beautiful kids, and a family whom I still get to do phone calls and visit with. I feel so blessed to make new memories and form new adventures.

This story was submitted to Love What Matters by Cally Baker. Do you have a similar experience? We’d like to hear your important journey. Submit your own story here, and subscribe to our best stories in our free newsletter here.