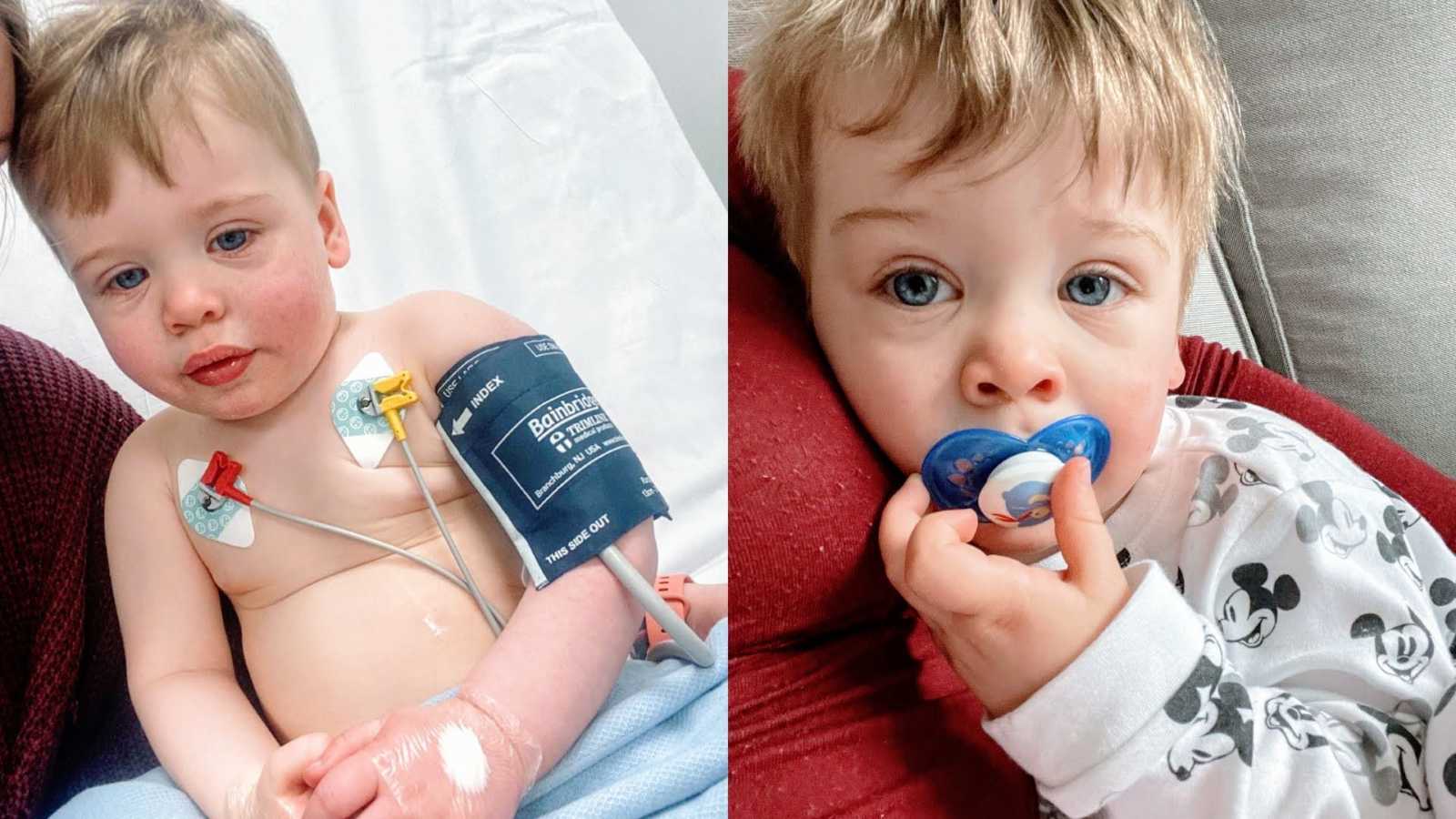 “We had delayed Jake trying peanuts for a little while; he started eating solids at around 6 months old, but I always avoided anything that contained nuts. Although I don’t have any food allergies, my elder sister does, so this always played in my mind, even during pregnancy. Growing up, I’ve witnessed my sister have several life-threatening anaphylactic reactions and although she’s avoided a reaction for over a decade now, it is something that has a massive impact on her day-to-day life.

One lazy Sunday in the middle of January, I thought, ‘Okay, let’s do this.’ The day before, I’d spent about 25 minutes choosing the peanut butter in the supermarket. I’d take it off the shelf but would panic and put it back; I felt so anxious, as if I knew it was a bad idea. I dipped a breadstick into some peanut butter and let Jake give it a lick. The three of us – me, Jake, and his daddy – sat together in the living room so we could monitor him and see if he reacted. Within minutes his voice sounded hoarse, his breathing sounded heavier, his face looked very blotchy and swollen. It didn’t seem serious enough to call an ambulance, so we decided to get into the car and drive to the hospital. Two minutes into our car journey, everything suddenly changed.

Sat on my knee in the backseat, Jake started projectile vomiting everywhere, his tongue was hanging out of his mouth and his whole face and lips were so swollen he didn’t even look like Jake. In less than ten minutes, we arrived at the hospital, but it felt like the longest car journey ever. I felt so helpless knowing there was nothing I could do and we just needed to get to the hospital as soon as possible. Due to Covid-19, I knew only one parent would be allowed in. Kalvin pulled up the car outside children’s A&E and I ran in, clutching Jake. There was a lady in front of me giving her child’s details to the receptionist, but I was so frantic I said, ‘I’m worried he’s getting worse.’

I was told to wait my turn. Anger flooded my body, knowing we were wasting precious time. After the lady was finished giving her child’s details, I dashed to the desk, gave Jake’s name and date of birth, said he was having a reaction to peanuts and we were immediately whisked through. In the room, I sat on the chair with Jake on my knee. He vomited again and went floppy. From that moment, everything happened so quickly. There were a few nurses and a doctor in the room, attaching Jake to different machines to monitor him and then they administered a shot of adrenaline into his leg. Watching this was terrifying and I just kept asking, ‘Is he getting worse?’ to which I got a reply of the one word I feared the most – ‘Yes.’ All of the numbers on his monitors were going crazy, I kept looking at them and then looking back at my little boy, who was barely recognizable. He was vomiting again; his little body was struggling.

Then everything seemed to calm down. He could breathe, he was okay. He clung to me and looked so scared. I sent a quick text to his daddy to let him know he was okay. The room emptied, except one of the nurses who applied numbing cream to Jake’s hands then came back 45 minutes later to put a cannula in and took some blood samples. We were then left alone, which worried me, but Jake was still attached to machines for monitoring which made me feel slightly more at ease. I tried to clean us both up the best I could, we were both covered in vomit. He cuddled into me and fell asleep. The nurse came back to let us know Jake would be admitted into the children’s ward overnight as sometimes a secondary reaction can occur even hours later. I carried him up to the ward in my arms as he was still fast asleep.

We stayed in the hospital until the following evening. Before being discharged, I was given training on how to use an EpiPen and the doctor told me the blood tests showed Jake had a very severe reaction and it was very unlikely he would grow out of it. He would have this allergy for his entire life. He has to carry two EpiPens with him everywhere he goes. We were referred to the allergy clinic for further information and further testing.

Being a toddler, Jake doesn’t really understand that he has an allergy. As he gets older and gets more of an understanding, we will teach him all about it and make it feel as normal as possible. We cook a lot of food from scratch and I want to teach Jake how to cook, as I think it will be a very important skill for him to have. For example, I don’t want him missing out on eating some delicious curry just because in a restaurant it may contain nuts. We make nut-free curry at home now for him; it’s one of his favorite meals!

I have so much worry for the future. I’m worried for Jake starting school and how accommodating the school and other parents will be around allergies. I’m worried about going on holiday and being unsure if restaurants are safe. I’m worried Jake will have an anxiety around his allergy or feel excluded – even something as simple as being at a party and being unable to have a slice of birthday cake. And I’m terrified at the thought of him having another reaction; I just want to keep him safe.

I’ve found a lot of people don’t realize how serious food allergies can be. Sometimes people think it will make someone sneeze or have an upset stomach, when the reality is an anaphylactic reaction can kill you within half an hour. With peanut allergies affecting around 2% of the population in the US and the UK, and it being the most common cause of anaphylaxis, more needs to be done to raise awareness.

For any other parents of a child with an allergy, I’d say always trust your gut instinct and be fully informed. Educate all of the people in your life around allergies and anaphylaxis. Encourage your little one to ask others if the food is safe for them to eat. Reach out to an online support group because seeing other mothers go through the same has really helped me. At first, everything is so confusing, but you soon get into the rhythm of checking food packaging and carrying medication everywhere you go. And although the worry never goes away, living with the allergy does become more normal. Do what you’ve got to do to keep your little one safe.”

This story was submitted to Love What Matters by Philippa Stead. You can follow her journey on Instagram. Submit your own story here and be sure to subscribe to our free email newsletter for our best stories, and YouTube for our best videos.

‘I don’t want this life. I’m not cut out for this!’ I heard ‘I’m sorry’ on the other end. Adrenaline began, my face got hot. Then the tears started to roll.’: Boy with down syndrome diagnosed with acute lymphoblastic leukemia

‘I had someone comment today, ‘Look at her putting her kid on a leash…how terrible.’: Mom explains ‘I choose safety’

‘My son’s wrestling photos ended up on a pedophile page. When I opened this person’s account, I felt like I was punched in the stomach’: Mom offers safety tips for ‘online parenting’

‘You’ll never get them away if you keep them so close.’ Babywearing my 9-week-old twins at the store, the lady working there shook her head. 9 WEEKS.’: Mom urges ‘my kids aren’t spoiled, they’re loved’