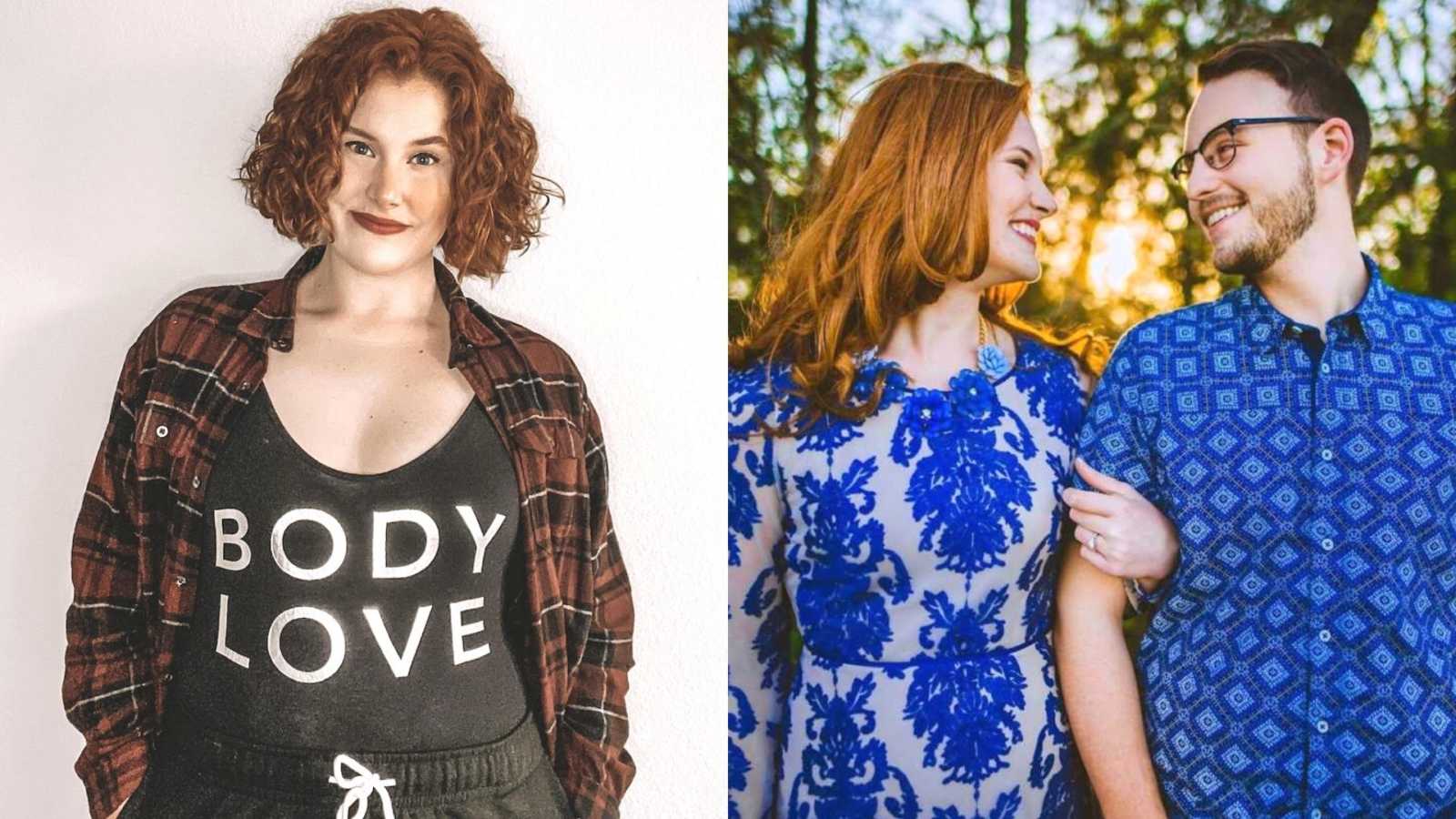 Trigger Warning: This story contains mention of eating disorders that may be triggering to some

“I was in elementary school the first time I realized I had a larger body. I was in about the fourth grade and remember looking over at the girl sitting next to me in class. I had noticed her stomach was flat when she sat down and not round like mine. I looked down at my body and thought, ‘Why don’t I look like her?’ It was a simple question that started the long journey of my complicated relationship with my body.

Approximately a year later was the first time I was told to lose weight. Imagine being a little kid going to the doctor’s office for your check-up and receiving concerned looks after stepping on the scale. That was my life. My mom was told I was too heavy and needed to go on a diet. Looking back, I know this is unethical, but we didn’t know any better at the time. I started attending Weight Watchers meetings and weighing myself regularly. I was learning to count calories before I even made it to middle school.

The dieting continued through my pre-teens and slowly transformed into disordered eating. My life was filled with low-fat foods and Alli weight loss pills. It was all-consuming. However, the turning point came at age 14 when I started attending a competitive dance studio. At this point in my life, I was used to being the biggest dancer in the room but had only attended an inclusive, family-owned studio. The new, competitive dance studio I started attending as a young teen was not this way. I was told regularly by my dance teacher I wouldn’t be a good dancer until I lost weight. By then, I had already had so many restrictions in my diet I thought the only way to lose weight was to not eat at all. So that’s what I did – I stopped eating.

My family realized what was happening quite quickly as I was not hiding my condition from them. I remember going to Hugo’s in Downtown Houston to celebrate my sister’s birthday and refusing to order anything to eat in front of my family. I sat back in my chair with my arms folded while a waiter placed a plate of food in front of me and my family insisting I eat something. I remember staring at the rice that was beautifully plated with apathy, knowing full well I wasn’t going to touch a single grain.

Soon after this dinner, my mom scheduled an appointment for me to see a psychiatrist. I was so angry I ran away from home the day of my appointment so I wouldn’t have to go. When I returned home, after my appointment had been scheduled to start, my mom took me to the doctor’s office anyway. The psychiatrist had agreed to wait to see me. I barely spoke during the session, but she obtained enough information to diagnose me with Anorexia Nervosa.

When we returned home after that appointment, I remember looking in the mirror and thinking to myself, ‘There’s no way I have anorexia, I’m not thin enough.’ The stereotypical image of what someone with anorexia looks like was ingrained in my mind. I quickly learned you can’t tell if someone has an eating disorder just by looking at them.

I had found recovery from anorexia by the end of high school. I felt confident heading off to college and obtaining a degree without the eating disorder following me. In a way, I was right – the anorexia did not return. However, that’s because it was another eating disorder’s turn. I was about 19 when the signs of Orthorexia Nervosa began. I was obsessed with healthy eating to point of being afraid of certain foods. I remember fearing dairy foods so much I would have anxiety attacks if I found a piece of shredded cheese in my Chipotle bowl. I would refuse birthday cake made specifically for me at my own party. I couldn’t eat anything that wasn’t on my list of approved foods. I was filled with anxiety around food, which affected my ability to socialize with others. I was isolated.

I met my now-husband, Taylor, when I was 20 years old, which was the sickest I’d ever been. I was emaciated and only had energy for thinking about food and completing my required, daily workout. There was so much I missed during those first few years together because of the eating disorder. I can remember football games, going out to dinner with friends, and ice cream dates I said no to so I could meet the needs of the orthorexia. I was consumed again and was having a harder time finding my way out compared to my experience with anorexia.

I was stuck in a recovery/relapse cycle with orthorexia for years. Four days after my 23rd birthday, Taylor proposed and I began one of the worst relapses I would experience with orthorexia. The pressure to fit into my wedding dress drove me to extremes. Wedding planning with an eating disorder was heartbreaking. I wanted to enjoy the beautiful moments of planning the event that would start the rest of my life with Taylor. Instead, I was hyper-focused on every bite of food I ate and overexercising using Beachbody programs.

Recovery from that relapse began the first day of our honeymoon. We were in Hawaii and I sat down at breakfast, looking across the table at the love of my life for a few moments. It was then I realized I wanted more. Not just for myself, but for Taylor too. I then headed to the buffet feeling at peace for the first time in a long time.

After our honeymoon, I was committed to orthorexia recovery for the first time. I navigated a few more years of ups and downs in recovery when I finally found freedom from eating disorders after attending a bible study group with my church. At the end of the study, I attend a conference that focused on helping me find healing. All of a sudden, during one of the conference sessions, it was like I had finally opened my eyes to God’s will for me. He wanted me to be free from food’s control over my life. It was then I decided to surrender the eating disorders over to Him. I left the conference room afterwards to get a catered boxed lunch, sat down with my friends, and ate. I usually would’ve inspected the content first and discarded my fear foods. Instead, I ate my whole lunch without a second thought. It wasn’t until after lunch I realized what happened. I remember letting out a breath I hadn’t realized I’d been holding – a breath I had been holding onto for years.

Ever since that day, eating disorders have not had a hold on my life. I struggle from time-to-time, but the behaviors never stick like they used to. I still need medication and therapy, but my faith is what has truly set me free.

To those of you who are working toward recovery, trust me when I say it’s worth it. It’s not easy, and it’s a daily choice, but I don’t regret recovery for a single day. My life is so much brighter without the shadow the eating disorders once hung over me. I finally feel at home in my body and in this world. Everyone deserves that – including you.”

This story was submitted to Love What Matters by Brit Michelle from Houston, TX . You can follow her journey on Instagram. Submit your own story here, and be sure to subscribe to our free email newsletter for our best stories, and YouTube for our best videos.

‘My boyfriend said, ‘I don’t want to be with a slob.’ I became fitness obsessed. My wardrobe shifted to gym clothes only. If I went to bed hungry, I was a winner.’: Woman shares journey to self-love after eating disorder battle

‘This is what you DESERVE.’ Even my previous therapists made snide comments.’: Woman in recovery for eating disorder says ‘recovery is BEAUTIFUL’

‘He raged, ‘Just STOP eating.’ Shocked and embarrassed, I did. I learned to eat quietly or not at all.’: Woman seeks recovery from eating disorder, trauma, ‘I’m reclaiming my joy’

‘The thinner I got, the more attention I received. I decided to quit eating altogether.’: Eating disorder survivor opens up about self-love, ‘I’m at peace with my body’