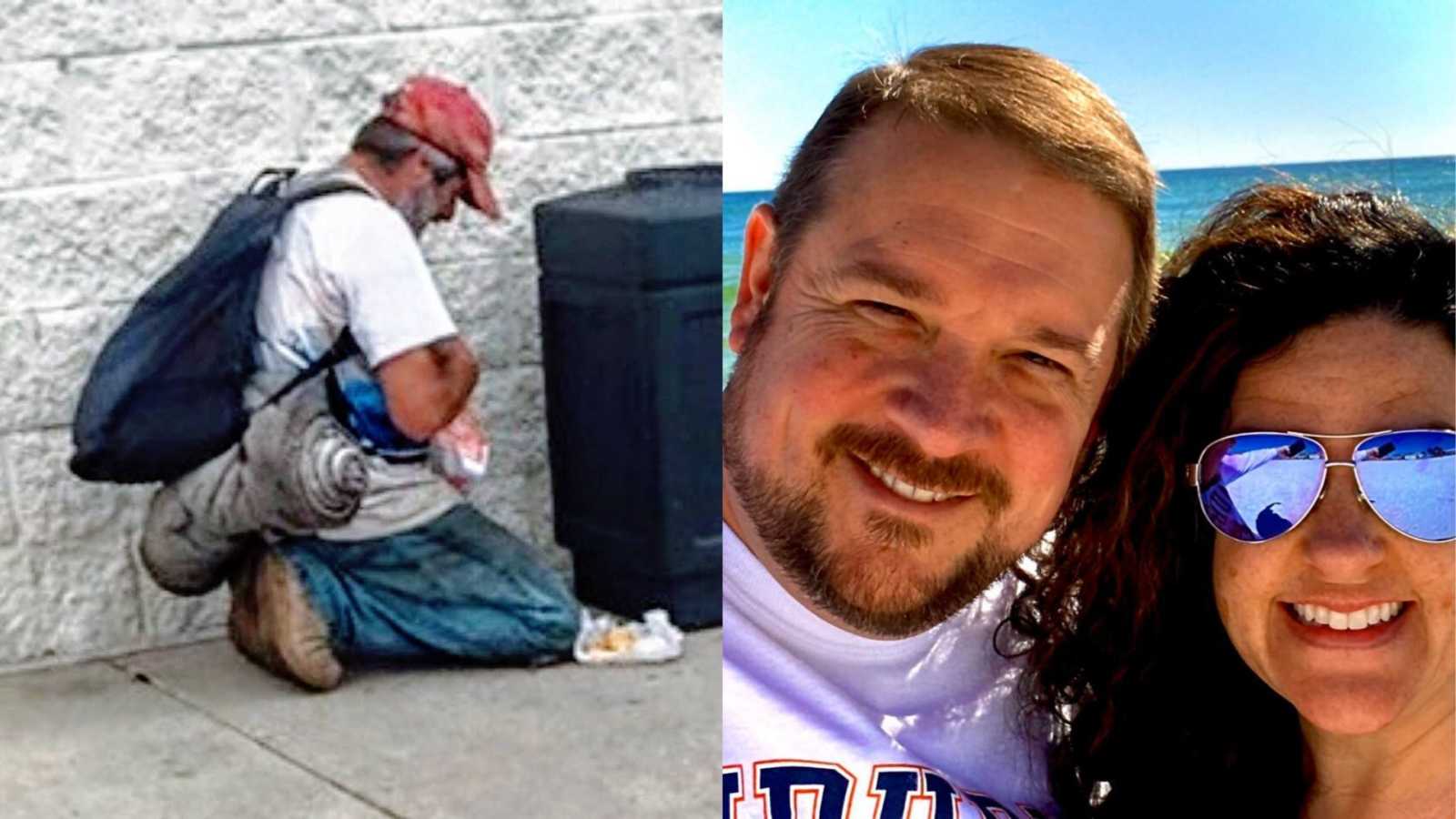 “This evening as I was leaving Best Buy, I noticed this man going through the garbage can outside of the store. As I walked to my car, I watched him as he reached in the garbage can, pulled out fast food bags, and inspected all that was in them. He did this for several minutes. He would find a few fries in one bag and a bite or two of a hamburger in another bag. You could see the hamburger wrapper by his knee where he was placing the food items he’d found.

He never bothered anyone or tried to stop and beg for money as people entered and left the store. After he went through the entire trash can, he neatly cleaned up the area and wrapped up the food he found in the dirty hamburger wrapper. My heart hurt for him. I am not someone who just hands out money or even helps homeless people because so many are not truly homeless. I guess I’ve never seen someone actually go through a garbage can to try to find food to eat.

I knew I had to help him. I got out of my car and asked him if I could buy him something to eat. He told me he would appreciate anything I could get him. He was on a bike and I told him if he’d follow me I’d buy him a meal at the fast food place around the block. He followed me and I bought him the biggest meal they had on the menu. The only request he gave me for his order was a big glass of sweet tea to go with his meal!

When I brought him his food, he was so thankful. He told me his name was Steve and he’d been homeless ever since his sister died last September. He was trying to get off the streets but it was so hard. I told him God loved him and I would pray for him. He told me again how much he appreciated the meal.

When I got back in my car, I drove off with such a heaviness in my heart for this man. I drove down the road and felt compelled to go back to help this man. When I came back, he had finished his meal and was riding away. I pulled up beside him and asked him if there was any way I could help him. He told me not really. He never asked me for money. I asked him if I could buy him a few meals and put it on a gift card for him. He told me that it would be so kind. I drove to McDonald’s, bought him some meals, and gave him a gift card.

He broke down crying. He told me he prayed for me today! I wasn’t sure what he meant. I was assuming he was praying for me for what I did for him, so I thanked him. He said, ‘No, you don’t understand. I prayed God would send someone to buy me a hot meal today…and he sent you!’ I didn’t know what to say…I was speechless! Praying for a hot meal wasn’t a prayer I had prayed today!

Come to think of it, that’s not a prayer I’ve ever prayed! I always pray over my food, but I’ve never prayed for a meal because it’s expected! I’ve never doubted I wouldn’t be able to eat. Tears began to fill my eyes. Oh my…how blessed am I. Maybe God used me to answer this man’s prayer, to let him know that He cares for Him and knows what goes going through! But maybe God also used this man to show me just how blessed I am and what I take for granted.

He said, ‘You see, I have cancer!’ He pulled up his shirt and pointed to a huge mass that was poking out from his stomach. He said he knew it wouldn’t be much longer. I asked him if he knew Jesus. He told me he did. I asked if I could pray for him and he said I could. We prayed right there on the sidewalk of McDonald’s.

Tears just poured from his eyes. He told me he knew he was going to die, and he was ready to die. He was tired of being in pain and he would be better off dead because this was no life–living this way. I stayed and encouraged him for a few minutes trying to fight back my tears. My prayer is I showed him the love of Jesus today, that something I said gave him hope.

You see, everybody has a story. I know Steve’s story now. All because I felt compelled to help him, he ended up touching me today.

When I left him, I knew I had done what God wanted me to do. God put him in my path today. I know he did! I’ve never felt such a feeling to help someone as I did today. I was reminded again of how blessed I am. I have a vehicle that gets me from place to place, I have a roof over my head, clean clothes, money to buy a hot meal, running water, electricity, my health, a job, family, and friends. Sometimes God sends situations our way to remind us of how blessed we are. If you’ve read this far, please remember Steve in your prayers.

Yes, I have been blessed, God’s so good to me! Precious are His thoughts of you and me. There’s no way I could count them, there’s not enough time, so I’ll just thank Him for being so kind. God has been good, so good! I have been blessed!”

This story was submitted to Love What Matters by John Brantley. You can follow his journey on Facebook. Submit your own story here, and be sure to subscribe to our free email newsletter for our best stories.

‘Please, all the restaurants are closed. I have nowhere to quarantine. I just need something to eat.’ This man didn’t want a mask or hand sanitizer. He just wanted food.’: Woman urges ‘don’t forget about our homeless brothers and sisters’

‘He carries pads for homeless women so he can ‘give them to any woman who needs them.’ My son is 8.’: Mom keeps ‘open drawer’ policy for menstrual products, contraception