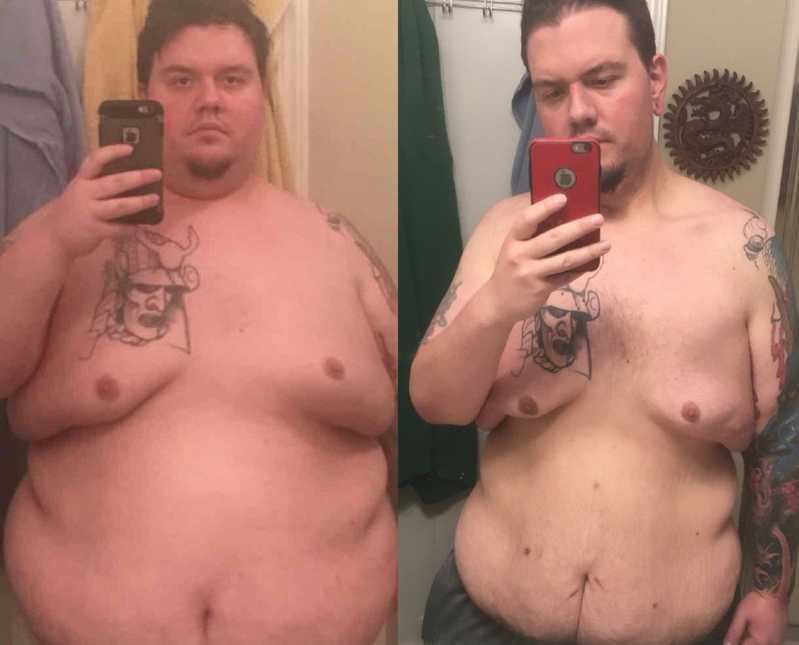 “I’ve been overweight my entire life. I come from a family that struggles with weight and I often thought it was in my genes to be obese. I was lucky enough to grow up in a household that not only included both my mother and father (who are the bedrock of my life) but also at times included my maternal aunt, my paternal uncle, and my grandmother. I also grew up in a duplex with another uncle and his family living right next door. I attribute this upbringing to who I am as a man today, however, the one thing we didn’t get right was eating. With both of my parents working hard to provide for me and none of us really savvy in the kitchen, we relied heavily on fast food and take out as it was the easy and quick way to get a meal on the table. This, coupled with my habit to eat until uncomfortably full, made it easy for me to pack on the pounds.

My earliest memories of being ‘fat’ were driving to my great aunt’s house with her when I was about 7 years old and complaining that I couldn’t run as fast as the other kids in gym class. I remember that I, in my robust 7-year-old knowledge, thought it was because I was clenching my fists while I ran that was slowing me down. She had suggested that it had something to do with my growing belly. Looking back it was blunt and I didn’t know what she meant by it, but I was a chubby child, and it would only get worse from there.

Growing up and getting larger as you can imagine was challenging as my weight caused me to be bullied. I was always self-conscious, wearing the same clothing every day because it was loose fitting and hid my body. My parents enrolled me into a Taekwondo program which had me physically active, and also helped me build confidence and discipline. This helped me to tune out the hate that I received from my peers and provided me an outlet to deal with stress through training.

I continued to gain weight well into my teens. I was among 3 of the largest kids in the school and it was a nightmare traversing the halls. In my junior year of high school I signed up for the football team and played left tackle. During this time I discovered we had a weight room and used it all that summer after practice. It was here that I discovered I enjoyed weight training. It was short lived however, since not too long afterward, the school demolished that wing of the building to renovate.

My weight continued to go up, and due to this I built emotional walls from people, fearing they would judge me or make fun of me because of the way I looked. I developed a ‘don’t approach me’ shell on the outside that lead me to connect to only a few people. Over the years I tried to find a method to exercise and try to lose weight, but I had no real direction or education on what to do. I tried waking up at 5 in the morning (for some reason I always thought that you absolutely HAD to wake up at 5 a.m. to work out and lose weight) and walk around the block of my neighborhood. All I remember of that experience was being still half asleep, freezing cold in the middle of January and thinking to myself, ‘this isn’t going to work.’ When that failed, I tried doing cardio in the spare bedroom of my parents’ house on an old stationary bike and also walking up and down the basement stairs. Needless to say, I didn’t see results with this either.

One day in 2011 I was sitting in the parking lot of a sub shop after a doctor appointment. My doctor was always asking what I was doing about my weight and I’d always dance around the question. I weighed 415 pounds at this point. This time he suggested looking into weight loss surgery. I knew it was a possibility but I never really looked into it or considered it seriously. I pondered the possibility of the weight loss surgery while staring at the Buffalo Athletic Club in the same plaza as the sub shop. I went in and got my dinner (the normal high calorie sub that I still got) and decided to join the gym. Over the next year and a half I lost only 35 pounds, getting to 380 pounds. I worked out fairly regularly but I still ate horribly, only 2 or 3 large meals and I still overate. Weight loss was slow, but then ‘life’ started to happen, and a situation at work forced me to change companies. While working at this new company I worked a grueling 14-hour shift. I had planned to get back to the gym and work out but it never happened. Then more ‘life’ happened. I broke my leg that year, was laid off from that job and was thrown into unemployment. I landed a contract job with my previous company as a work-from-home situation.

One afternoon my mother had come over to spend some time with me while I was off, and we discussed the weight loss surgery again as the topic came up of our health and weight. At this point it was 4 or so years after I joined the gym and then subsequently gained back the weight I lost — and then some — to the tune of 100 pounds. She wanted me to seriously do something about my weight as she was scared for my future. She would always comment on how similar I was to her father (my grandfather) in weight and stature. He unfortunately died at the age of 50 of a heart attack. His brother (her uncle) also died at the age of 50. It was then when I had made a deal with her: If I had the surgery done, she had to do it with me. She, having Neuropathy and Diabetes, struggled with her weight as much as me. She’s as stubborn as a mule and even though she wanted to do something about her weight, she was limited in what she could do, so very often she would fall flat as much as I did.

The moment I found stable employment with my current company with health benefits I found the first available seminar for the Bariatric surgery practice in Buffalo and my mother and I both attended. I weighed 470 pounds at this time, and after completing the pre-surgery criteria I had my date set for June 28, 2017. My mother was a month out post-op at this time. I took pre-op pictures around the end of May in 2017, and a month later I had surgery. 11-months post op (and a year after I took the before pictures) I’ve lost 200 pounds while my mother has lost 130 pounds.

While the surgery is an amazingly powerful tool it is NOT by any means a cure all. I’ve had to make a very concerted effort to change my eating habits which includes adding smaller meals to my day to meet my protein requirements. And as soon as my surgeon cleared me to exercise I rejoined the gym and started weight training again. Everyone asks me how I feel now that I’ve lost so much weight, and while I sometimes say I don’t feel any different, I can definitely do more. I have energy from dawn until dusk and am constantly discovering new things I can do like bending over to tie my shoe and not wheeze, walk up a flight of stairs without being winded, cross my legs while sitting, or even RUN! Most people might take these things for granted, but when you’ve gone your entire life without the ability to do them, discovering that you can is one of the greatest feelings in the world.”

This story was submitted to Love What Matters by Seth Olsen, 31, of Buffalo, New York.  Submit your own story here, and subscribe to our best stories in our free newsletter here.