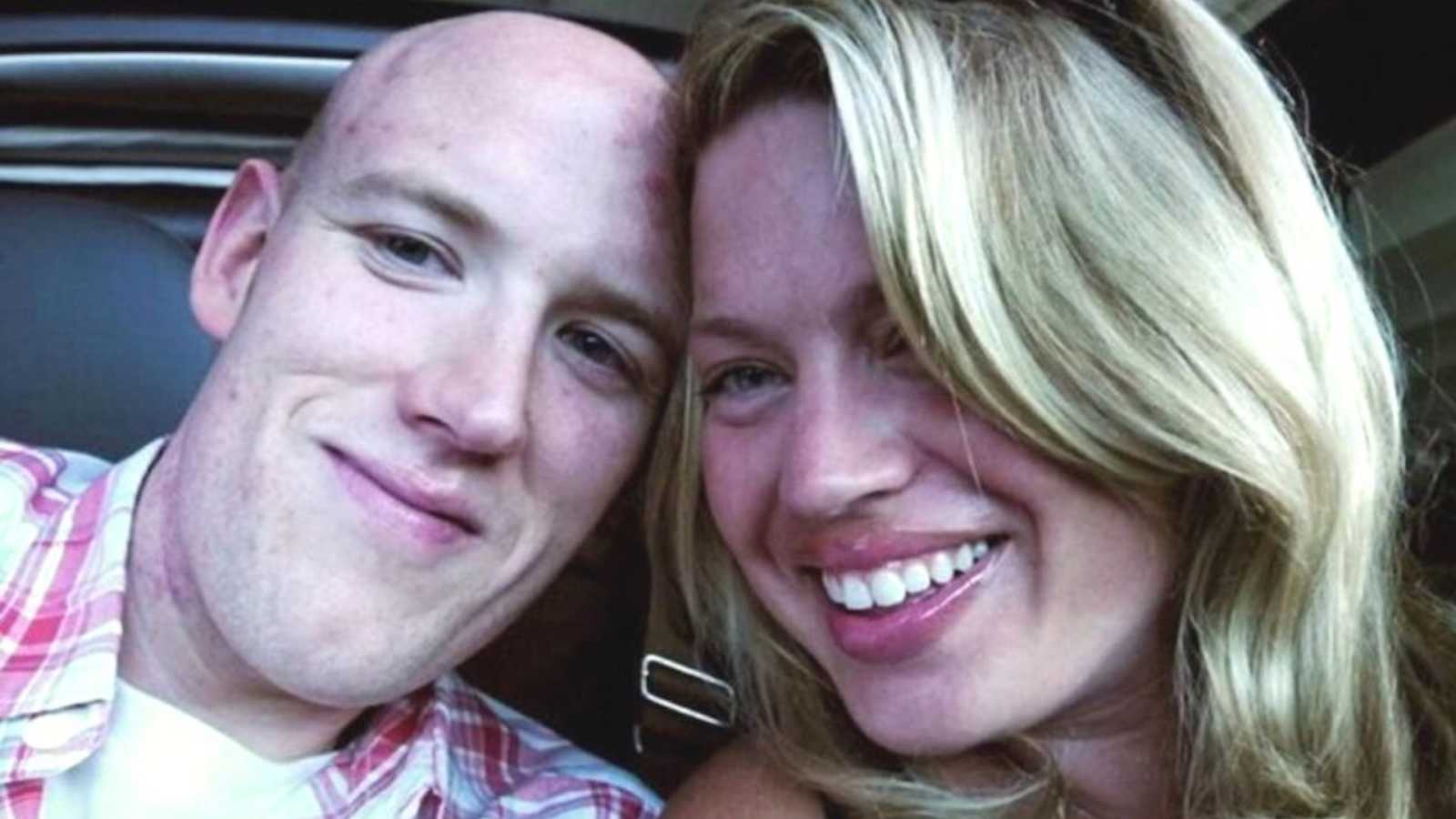 “Eight years ago today was the day my life changed for the better. It’s the day I drove to the airport to pick Matt up. This was in my memories today. This is how he felt about that day. The internet is a lovely way to preserve feelings. His words:

When we began talking on Twitter through a community of other people on Weight Watchers, Matt had a girlfriend and I was married, so our friendship was just that: a friendship, consisting of tweets public for everyone to see. Hashtags brought us together. My love for them now stems from what they brought into my life back then.

One day when I was frustrated beyond belief with my weight loss (and my failed marriage), he messaged me privately on Twitter to offer advice. He was very sweet and sincere and seemed very concerned with not making me mad or offending me in any way. After that, we would message each other weekly after weigh-ins and celebrate losses and complain about gains. This went on for a year. Well, I would complain about gains. Because Matt never gained one single week during his weight loss.

Matt got dumped by his girlfriend. He was dating around and had been set up on a blind date. He went out with the girl once. For the second date, she stood him up and he tweeted about it. I responded (publicly) something like ‘Aw! If I was in England, I’d go out with you!’ He messaged me instantly and said he’d cut off his arm for a girl like me. This made me blush. I had such a big crush on him.

We became absolutely inseparable. Lonely nights in an empty apartment weren’t so bad when I knew I could FaceTime him and see his smiling face. We laughed so much and really complimented each other’s personalities. It became very clear through all the sadness my divorce brought me, there was happiness around the corner.

My heart was beating across an ocean.

I drove to the airport that day with my hands shaking so badly, I could barely keep my car on the road. I had been tracking his flight online all day and knew he had landed. Nervous excitement! The international terminal at the airport had just been open a week and I was super nervous I’d get lost. I didn’t. I was all dressed up in that same black dress I wore in my Twitter profile picture. It wasn’t anything spectacular, but he loved it.

I walked through the airport and got on the escalator to ride down into the area where he should be, praying I wouldn’t fall. I started scanning the crowd.

When I saw his face, every fear I had just fell away. He was pushing his luggage cart towards me with the biggest smile I’ve ever seen on his beautiful face. You know in the movies where everything goes slow motion and the music starts and the rest of the world falls away and the people seem like the only two on the planet?

The song that was playing in my head at that moment was Gavin DeGraw’s ‘Follow Through’:

‘Oh, this is the start of something good

I haven’t felt like this in so many moons

You know what I mean?

And we can build through this destruction

As we are standing on our feet

So, since you want to be with me

With every word you say

And I, all I really want is you

You to stick around

I’ll see you every day

And he did. With every single thing he ever said to me, he followed through.

I had the opportunity to meet Gavin in person at a concert we were supposed to go to together after Matt died and tell him what his music meant to us. It was a mainstay in our relationship from start to finish, right down to the day Matt died. We played all of his favorite songs for him. We believed belief made things real because it always did for us.

I can’t even describe how it felt to have had someone like that, someone who you can completely depend on to pull you out when you’re drowning. At the lowest point in my life, when I was the most lonely I had ever been, this angel came along to show me what real happiness could be. It was amazing.

When he hugged me, I melted. When he kissed me, I thought for sure I would pass out. When I looked into the most sparkly blue eyes I had ever seen, I knew I was in trouble. We finally made our way out of the airport, wedged his luggage in Ruby (who says smart cars have no cargo space!), and started what became the most amazing summer of my life.

Technically, he could have boarded a plane and come right back for another 90 days. But he probably needed to go home and work some before his next trip because I spent all of his money. We had a big ‘uh oh’ when he was in America that first 90 days. This girl? The one with the broken uterus who couldn’t have kids? Well, it turns out that wasn’t true. I have the 7-year-old to prove it.

She is the best thing that ever happened to either of us. She is his legacy.

I know bad things happen so good things can happen. I believe in fate. I believe in destiny. I believe there is a soulmate out there for every single person on this planet. They may not live in your hometown, your state, your zip code, or even your country. But they exist.

And if you’re lucky enough to have them come into your life like I did, hold them close and as long as God lets you. Because He always wants the good ones back a little too early.

When he hit a knee and asked me to marry him, I laughed at him. And then I said yes. Ate all those ‘never getting married ever again’ worlds really fast.

Cancer stole the best years of his life. Cancer destroyed our perfect family. Cancer took my only child’s dad. But cancer cannot take these memories away from us. In December, we flew some of his remains home to England for a memorial there and so he can be with his family. I placed the box on the exact spot where we kissed that steamy day in May 8 years ago.

The escalator I thought for sure I would fall down on my way to him. Every single time we went to the airport after that day, he would stop me there and kiss me and give me the biggest hug. I would do anything in the world to relive that day one more time. It was magic. If it reads like a fairy tale, it’s because it was. I was constantly in disbelief I actually got to be happy with someone. I had everything I ever wanted in Matt. He was my person.

All that’s left now of our relationship are memories like this. Dates I cannot forget. Laughter. Love. So much love. And a little girl who doesn’t remember her daddy not being sick. But I remember. He was a machine. He never slowed down. He had more energy than anyone I had ever met and he lit up every room he walked into. His head was always on a swivel, looking for excitement or trouble. Usually both.

Stage 4 colon cancer robbed me of the love of my whole life. We weren’t perfect. Our marriage wasn’t perfect. But we loved every second of life together.

This is the last time I held his hand. I don’t want to remember him like this.

Full of life and excitement, full of optimism and love. He never saw the negative. He was the most positive person I had ever met. I ask myself all the time ‘what would Matt do?’ Matt would live. And he would keep loving people. And he would keep trying, even when trying is hard.

He promised to love me until the day he died. He always followed through.”