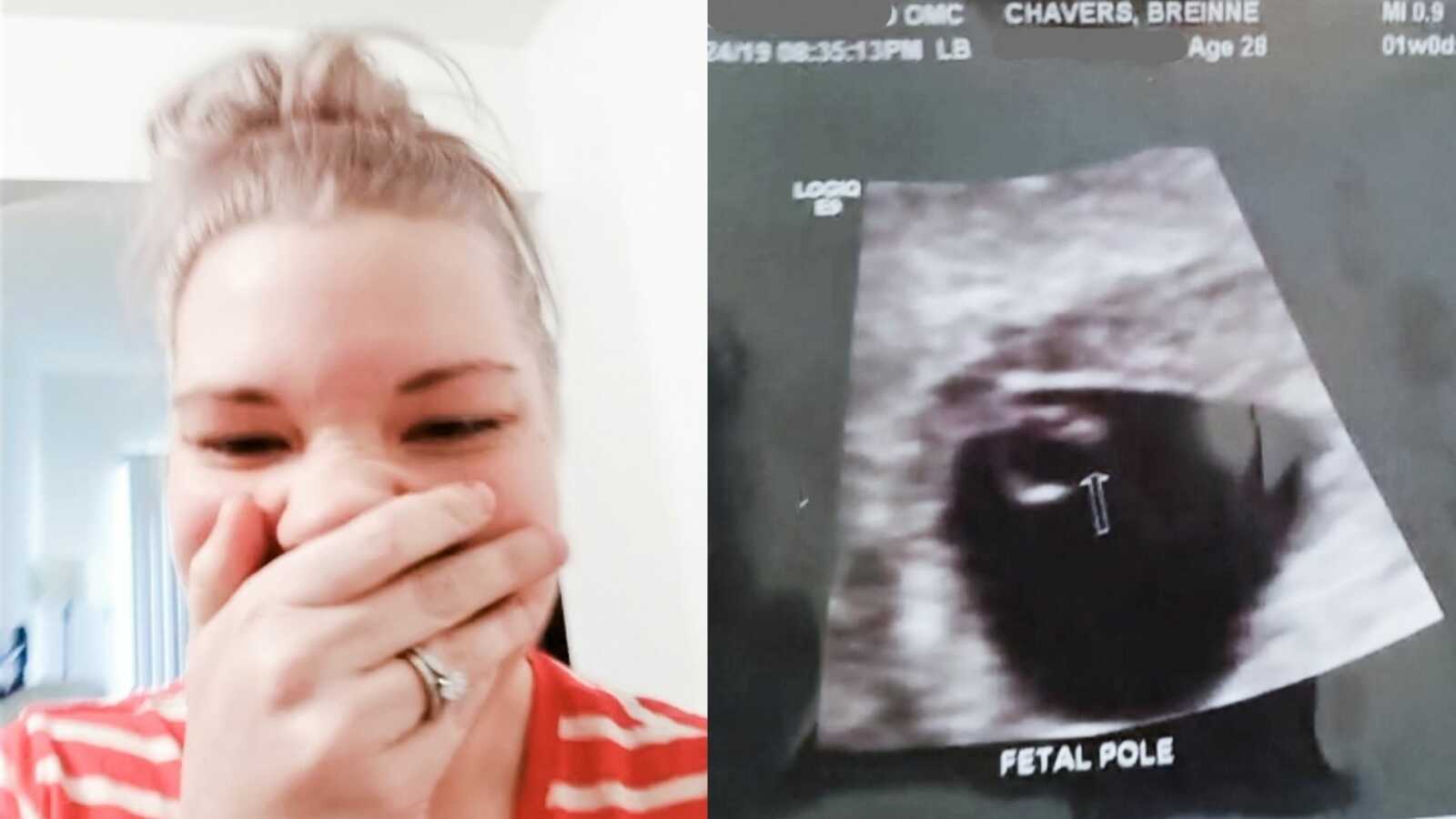 Disclaimer: This story includes mentions of infant loss and grief that may be triggering for some.

“Months after having my third baby, Oliver, my doctor discovered a solid mass on one of my ovaries. Luckily, it was so small (about 4 cm) she wasn’t worried. She told me it would most likely vanish over time, but if it grew, we would talk about removing it. I went in every three months for ultrasounds to have it monitored. During my fourth pregnancy with Ever, the pain just disappeared. I was sure the mass had dissolved like the doctor thought it would. But about six months postpartum, a sharp, familiar pain returned in the same spot.

On April 24th, 2019, I went in for another ultrasound to determine the cause of the discomfort I had been feeling. The tech put on her gloves and sat down. She was sweet, with a genuine smile on her face and a head full of curls. Kindness radiated through her and I felt a sense of comfort, as if she were an old friend.

‘Okay, you ready?’ she asked. She placed the wand on my abdomen and observed. After a few minutes, she exclaimed, ‘Good news! The mass is gone. Both your ovaries are clear. I just need to go back and check out your uterus.’

My heart sank. ‘This is it,’ I thought. I’ve lived a good life without too much tragedy, so something was bound to happen eventually. I braced myself, imagining what it could possibly be she was seeing, and how my life might change.

‘When did you say your last period was?’ she asked, while cocking her head to the side.

‘About a week ago,’ I replied nervously.

‘Was it normal?’ she asked, looking confused.

‘No, actually, it was really light.’ To be frank, I had assumed I wasn’t ovulating because it was a stressful month.

‘Huh. Okay, well see that little ring right there?’ she pointed to the screen. ‘That’s a yolk sac. And that little grain of rice is the baby. You’re six weeks pregnant.’

It was too early to hear a heartbeat, but she pointed to the screen and showed me the life that flickered inside me. She explained the pain I had been feeling was a corpus luteum cyst which appears after ovulation and looks like a ring of fire. The flickering meant the baby was alive. I was speechless.

I thought we might end up having a fifth someday, but my husband and I were content with where we were. Just enjoying our four and definitely not ready to try for another. But believe me, I knew how privileged we were to have this surprise baby, so I couldn’t help but feel joyful and lucky. Once the shock wore off, happiness engulfed me and I just started giggling. And there I sat, with a complete stranger, while we just laughed together.

‘This has never happened to me before! I’ve never found a surprise baby! I’m excited!’ My doctor exclaimed, sharing in my joy. And boy, was I excited too. This had never happened to me before either. I usually know right away when I’m pregnant. Then, Hyperemesis Gravidarum reared its ugly head, and I was vomiting before even testing positive. I always confirm my suspicions, and that second pink line pops up early at just three weeks along. But this time, there were no signs. This little guy decided to sneak in there, undetected for a few weeks. I was ready to leave, and the tech held the door open for me. I walked through, then turned back to say goodbye. Simultaneously, we wrapped our arms around each other and hugged like we were sisters.

‘Congratulations!’ She whispered in my ear. To this day, I remember her smile. I will never forget her. I walked to the car and my heart started pounding. I was terrified to tell my husband. Would he be mad? Excited? Scared? I didn’t know what to expect. I shot him a text that read: ‘Brace yourself. I have news.’ He called me immediately. First, he asked if I was okay. When I told him I was okay, he knew instantly.

The other side of the phone went quiet. I drove home, with call still connected, in silence. My mind raced. Five kids. Five freaking kids. That is a lot of kids. Four kids is doable. But FIVE?! What if I can’t handle this?

When I walked through the door, I was met with a big, bear hug from the man of my dreams and we both just broke out into laughter. He laughed. I laughed and cried. Without me saying a word, he spoke.

‘We’re good at what we do. We can handle one more.’ The peace in his voice spilled over me and all my fears melted away. And that was the last time I doubted my strength as a mother.

I would give anything for this story to have a happy ending, but our precious baby, Sterling, died just six days after he was born. I often think back to the day I learned of his existence. I think of all the laughter and bliss he brought us, just from knowing he was growing in my womb. I wonder how different my life would’ve been if we had never got our fifth baby, if my life never would’ve been touched by such deep loss and heartache. But that is a life I would no longer want, because it would mean I wouldn’t have had him at all. All the pain of losing him was worth the joy and love he gave us. Our Sterling died from a rare metabolic disorder we didn’t know he had until it was too late. But that my friend, is another story for another time.”

This story was submitted to Love What Matters  by Breinne Chavers of Ontario, CA. You can follow her journey on Instagram and on her website. Submit your own story  here, and be sure to  subscribe to our free email newsletter for our best stories, and  YouTube for our best videos.

‘I’d lie on the bathroom floor and tell God I was ready; he could take me. I’ll never be fully healed.’: Mom loses 6-day-old son to rare metabolic disorder, shares reality of grief

‘It was a birth injury.’ I was furious. Because it was a home birth, he was denied care.’: Woman loses son after being refused care, ‘They let us down in our time of need’

‘How blessed are we that I got pregnant?! I would’ve never known I had a tumor if it weren’t for the baby. I felt fine.’: Mom-to-be learns of cancer diagnosis thanks to surprise pregnancy