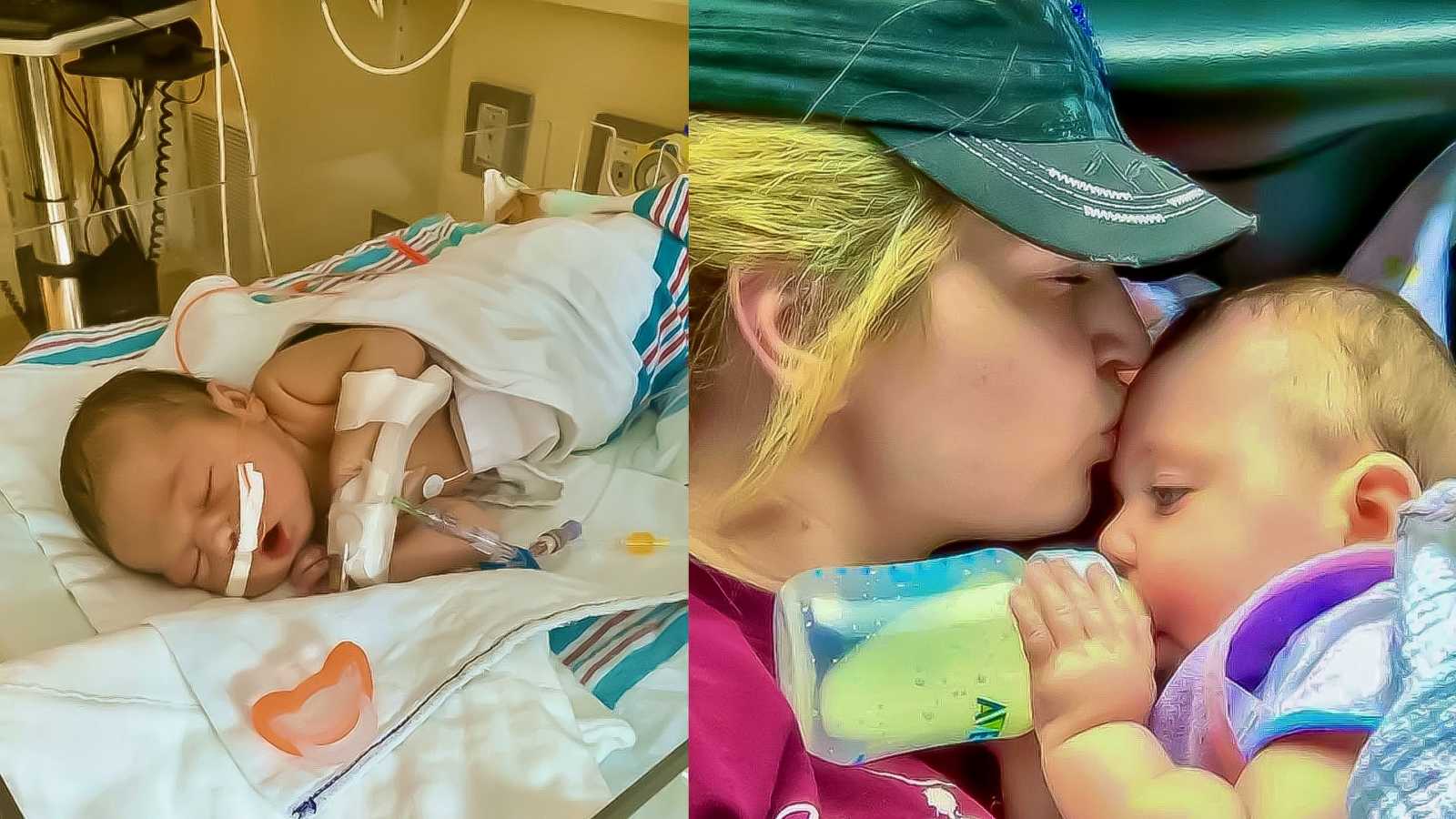 “After 10 years of being together, my boyfriend and I decided we were ready to have a baby. We tried for almost a year and then it finally happened. It’s kind of funny how I found out I was pregnant. I had a wisdom tooth that had been really bothering me and I finally got an appointment with the dentist. I was filling out all the paperwork and it asked, ‘Could you be pregnant?’ I sat there trying to figure out what to put. I mean yeah, I guess I could be because we have been trying, but I’m pretty sure I’m not. I decided to put ‘Yes’ for the answer.

They called me back and the lady said, ‘Since you could be pregnant, I need you to go take this test to make sure. If you are, we can’t do the x-rays so we won’t be able to finish the appointment.’ I grabbed the test thinking this was crazy, went into the bathroom, and pee’d on the stick. I took it out to the lady and I said, ‘Yeah, we are good’.

I was only about two weeks along. My pregnancy was perfect. I had no issues, never really got sick, and everything seemed to be going great. At our 20-week ultrasound, we found out we were having a girl, but we also found out there was a ‘bright spot’ in her heart. We were referred to a specialist and everything ended up looking normal. No signs of Down Syndrome, heart looked great, baby looked great.

Fast forward to 40-weeks. There were no signs of her coming out so we scheduled a day to be induced. The next morning, I started having contractions so we went to the hospital. They decided to keep me. I got all set up in the room but I was progressing very slowly so they decided they would still induce labor. I was bouncing on balls and in the shower and doing all this crazy stuff and nothing was working.

Once I was dilated to four, I decided I needed an epidural. I still wasn’t progressing very fast and I was in labor for about 24 hours. The overnight nurse said she could feel the baby’s hair. I was so happy she had hair. The next morning the epidural machine beeped and said that the medicine was going to run out in 10 minutes. My boyfriend frantically tried finding someone to fill it. No one could find the anesthesiologist and he was the only one with the key to the medicine. My epidural ran out. Bring on full blown labor.

The nurse said I was dilated to a nine now, but she said I couldn’t push. I just wanted this baby out, I just wanted to push her out. They called the doctor and when she showed up, she told me she didn’t understand why they said I was at a nine, I wasn’t. They had my laying on my side, clenching like I was going to pee my pants. They kept telling me not to push. One nurse even said she didn’t want to deliver a baby today.

I remember being scared; I didn’t want a c-section. It felt like it took forever. They finally got the baby out and as they took her over to weigh her, I looked at her and all I said was, ‘What is wrong with her? Something is wrong’. I didn’t get to see or hold her for at least four hours after she was born. It turns out, when my water broke (whenever that was), there was a funny smell, which actually indicates an infection. Action should have been taken the moment they knew there was possibly an infection.

My baby was born with a severe infection and I didn’t even know about it until hours after her birth. When her pediatrician came to check her out, the moment she saw her, she knew something was wrong. I could see it in her face. To me my baby looked normal. She was hooked up to IVs and fluids, and I don’t think we even tried to feed her for the first full day.

But her pediatrician knew, she checked her over and then came over to me and my boyfriend and said, ‘She has to be transferred to the children’s hospital right now. There are multiple things that could be wrong. We are going to call them and get the ambulance on the way. There are signs of spina bifida, she has ‘floppy baby syndrome’, she could have this, she could have that.’

So many things were racing through my head. How did the best day of my life turn into the scariest day of my life? Why was this happening to me? To her? She was finally shipped off to the children’s hospital and we followed behind her. I had no time to recover from the major surgery I just had. Her pediatrician told my mom they got her out just in time, five more minutes and we could have lost her.

We spent 21 days in the NICU. Multiple tests, long days and long nights. It was hard. We prayed and we had lots of people praying for us. They couldn’t figure out what was wrong. All the tests came back normal. Except she couldn’t swallow correctly and she was so weak. There was no spina bifida, nothing wrong with her brain, everything was seriously ‘normal’.

We were lucky. We prayed and we knew we were lucky. After the longest 21 days of my life, we were discharged with a baby who they said has low muscle tone and was going to need a feeding tube to eat for at least a year. Life as we know it was changed forever, like it is whenever you have a baby, but what do you do with a baby that can’t eat and might not be able to walk someday?

She started occupational therapy at three months and physical therapy at four months. And after five months she was feeding tube free! It’s been almost four years and she’s still going to therapy once a week, we have also added speech therapy. She’s gone through tons of appointments and tests and we still cannot find out why she has what she has.

We are lucky. I tell myself every single day. It could have been worse. We have a daughter that is WINNING when everyone said she wouldn’t. She has hit all of her milestones, they may have been a few months late, but my girl is rocking her life and she works so hard to do it. I cannot wait to see what she does to change the world because I know she will be a world changer.”

This story was submitted to Love What Matters by Lindsey Lynch, 31, of Michigan. Follow her journey on Instagram here.  Do you have a similar experience? We’d love to hear your journey. Submit your own story here, and subscribe to our best stories in our free newsletter here.

‘I know you feel invisible. I see you running your child to therapy when friends take their kids to Little League. I see you cringe when people whine about petty things that pale in comparison to your day.’: Mom pens touching letter to special needs parents 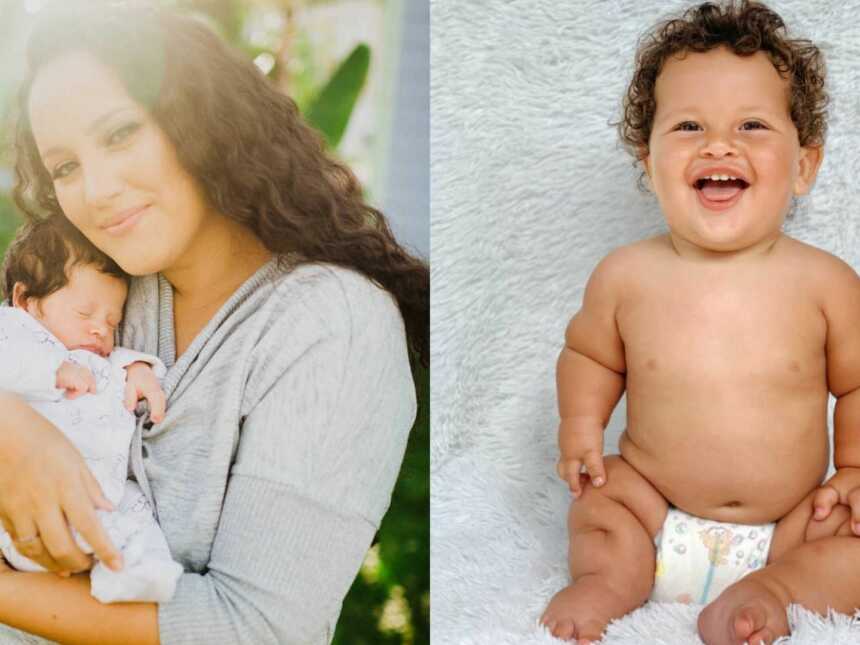 ‘It’s gotta be her genes, something is wrong with her.’ Rumors flooded about our little one.’:  Mom to son with limb differences urges for kindness, ‘We are all beautiful humans’

“Those unkind souls didn’t know I’d grab a pair of baby shoes and cry because my son couldn’t wear them. No idea I’d put away so many pants and shorts because his little leg wouldn’t fit. But despite the unexpected, when they placed him in my arms, I couldn’t have loved him more. He was mine. My baby. My special prince. He was taking his own slow steps in life, his own way.”

‘IT’S A BOY!’: Mom Of 6 Girls’ Reaction To Delivering Surprise Baby Boy Will Warm Your Heart

The Murrays welcomed six daughters over the last decade. But the couple received a big surprise earlier this month when, after the birth of their seventh child, they realized the baby was a boy.