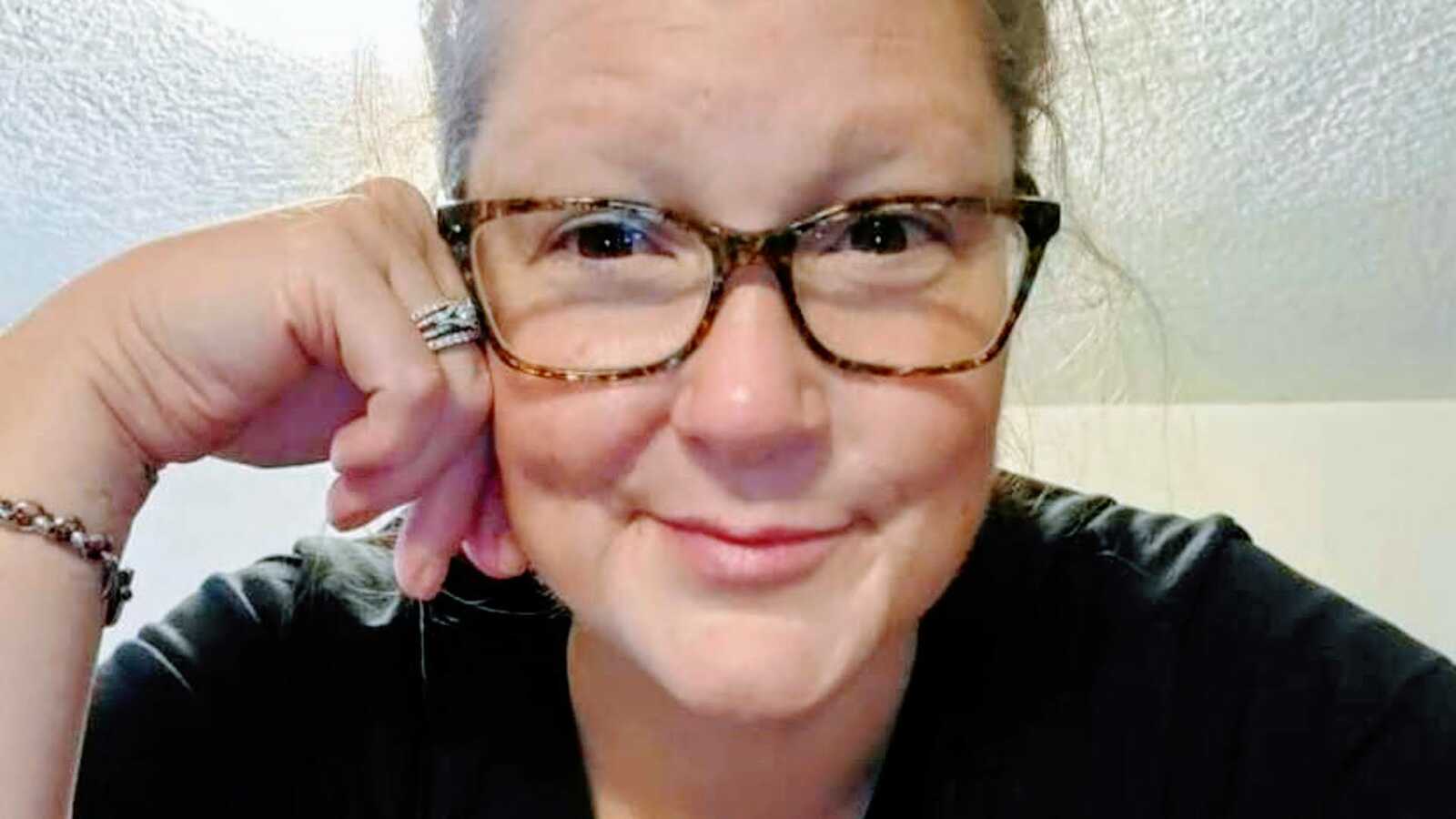 “This is very hard for me to admit, but I put off my first mammogram for 4 years from the first time my doctor brought it up. I ignored the repeated requests over and over.

I’d brush it off and do the, ‘Yeah, yeah, yeah… I know, I know.’ Did I ever go? Nope. Every appointment was the same old crap. ‘Have you scheduled your mammogram, yet?”

Gah, so irritating, right? I did self-exams regularly… I’d never felt anything. I would let year after year pass.

Then, in June of 2016, at the age of 44, I went to the doctor because I was feeling ‘off.’ My weight was fluctuating, I was having hot flashes, headaches, lethargy… basically feeling like crap. I hadn’t had a period in months. I was thinking I must be hitting menopause early or something.

So the testing began… and my doctor brought it up again. ‘Sherry, get a mammogram.’

I caved. This was just to shut everyone up. I finally went in for my FIRST mammogram. About two weeks later, after a ton of tests, a man I did not know sat me down and told me I had breast cancer.

What the? What? Yeah, right. Wait. What? But I never felt any lumps. How in the world? Huh?

Of course, it had to be one of the super speedy forms of breast cancer… HER2 triple positive, and it was already invasive. Then, that same man who had given me the worst news of my life said the most amazing thing, ‘It looks like we’ve caught it early.’

What? Early? How? After so much neglect? Early?

My first mammogram absolutely saved my life. Did you read that? I’ll say it again…

After two years of some pretty hardcore chemo, and a full mastectomy, I thought I was on the road to recovery.

But I started feeling extremely ill in January of 2018. I was in and out of the hospital multiple times with pneumonia, sepsis, and a collapsed lung.

Then, a new symptom. Left shoulder pain. I was going to the doctor over and over. We were chalking it up to the fact I had been on chemotherapy for 2 years and my body was tired. I became weaker and weaker through the spring of 2018.

Then the day came that, after some blood work, my doctor sent me to the ER again. I asked what we were looking for. She just said, ‘I don’t know. I can tell there is something off. Your pancreas is acting up. Just go there now and I will email them.’

I went to the hospital and I was so afraid the doctors were going to be like, ‘Oh, her again.’ They were as frustrated as I was. The pain in my shoulder was so intense, it was all-consuming, not to mention I had lost 52 lbs in 3.5 months.

The doctor said, ‘Well, the only thing we haven’t done is scan your abdomen. I don’t know what else to do.’

After my scan, I remember watching the doctor come into my room with a picture in his hand. It was obviously a scan. He sat down, with a defeated look on his face. The next words that came out of his mouth changed my life forever.

‘Unfortunately, we have found a significant mass in your abdomen that has metastasized to your liver. We have to transfer you by ambulance to another hospital that can handle this case. This is beyond us.’

I was in such a fog. I looked over at my husband and he was staring straight at the doctor. I think he was afraid to make eye contact with me. Then I did the weirdest thing. I put my finger up and said, ‘Excuse me. Where is the closest bathroom?’

The doctor pointed down the hall. My husband offered to come. I just put my hand up, like… no.

I had to get out of there. I felt like I was going to faint and vomit and scream, all at the same time. I remember thinking, as I walked in slow motion toward the bathroom, that seemed to get further and further away… ‘I’m not getting out of this one.’ I believe I actually said it out loud, to myself.

We later found out it was not my breast cancer but was actually a very rare gastrointestinal cancer that had been growing in my body since before they found my breast cancer. They were totally unrelated.

I was told this new cancer was a much more serious diagnosis than my previous stage one HER 2 3+ breast cancer…. which was still pretty damn serious.

We soon learned my new cancer was incurable and stage four. I had a tumor the size of a large head of lettuce attached to the outside of my stomach and had also adhered itself to my diaphragm! Aha! Everything was making sense now! The tumor was pinching a nerve in my diaphragm that stretched up over my shoulder. Unbelievable.

I was soon a basket case. Why wasn’t this found sooner? How could it have been there BEFORE my breast cancer? Why couldn’t we have found it before it had become stage 4? Am I dying?

Things moved pretty quickly after they found this new cancer. It wasn’t the doctors’ fault. It was nobody’s fault. But, at that time it was hard to console me or convince me I wasn’t going to die. I was being referred to Palliative Care, caseworkers, counselors, and was asked to sign a DNR.

It’s hard to not be angry. Bitter. I am both of those things more times than I want to admit.

One particularly dark night, soon after my second diagnosis, I was busy throwing myself into one of my signature tantrums, droning on and on with the ‘why me’s’ and screaming at anyone who dare try to bring me out of my funk, when my tender-hearted son, Cameron, gently and ever-so-cautiously, interjected…

He walked into my room and stood in front of me with his hands full of every hospital wristband I had ever come home with. I was in complete shock. I had no idea he had been saving these. He said, ‘If you can get through all of this (lifting his handful of bands up to me) then you can get through THIS.’

As I stood in complete awe, he went on. ‘Mom, can you imagine if they had found your gastrointestinal cancer first? The last thing on your mind would have been a mammogram. It had to happen this way, or we probably would have lost you by now. Your breast cancer was so aggressive.’ I agree.

I am here today. After a surgery that split me from my sternum to my belly button, they got the entire tumor out of my abdomen, removed part of my stomach, repaired my diaphragm, removed my gall bladder, and did an ablation on the one in my liver.

It’s been a very long road of recovery, and I will be on chemo for the rest of my life. My prognosis? Well, on paper, the stats don’t sound so good.

I am 3.5 years into this new diagnosis. But I am here. I will keep fighting every day.

A lot of you reading this know my story all too well, as you have followed my journey and know me as mama of ‘Sherman The Therapy Dog’ …. and if you do, you also know we lost Sherman in July of this year to Osteosarcoma. We miss him every day. What a huge loss for our family. Even quite literally, as he weighed in at 230 lbs. He spent his entire life serving others.

Cancer. What a dirty word.

There are days I have so much pain that I cannot stop the tears from streaming down my face. There have been times I have looked at my husband and said, ‘I don’t know how much longer I can do this.’

There. I’ve said it. There are days it’s extremely hard to be me. But I WILL keep fighting. I am thankful for those who surround me with love and give me strength on my weakest days.

Fear is funny. It can manifest into anger and ugliness toward the people who love you the most. I could not get through each day without my family and a small group of friends who have stood beside me all these years. Thank you for not leaving me. Thank you for loving me when I’ve felt and acted so unlovable.

I am literally living proof that even in your darkest hours, you CAN come out the other side. There are brighter days to come. Yes, they may get shuffled in with all the hard ones, but they are there.

This story was submitted to Love What Matters by Sherry McAllister. Submit your own story here and be sure to subscribe to our free email newsletter for our best stories, and YouTube for our best videos.

‘HR called me in, crying. ‘Your coworkers donated sick time to you, but your employer is taking it away.’: Bilateral breast cancer survivor finds light after workplace discrimination

‘When I figured I’d get cancer at some point, I meant after age 50. I worried the best years of my life had passed.’: Breast cancer warrior urges other survivors ‘life is still a beautiful adventure’

‘You have an 80% chance of getting breast cancer.’ I’d worked so hard to feel confident in my own skin. Would surgery change that?’: BRCA1 carrier details self-love journey, ‘You’re stronger than you know’

“I’m talking to the girls who stand alone, the ones who float from circle to circle. The ones who may just have one best friend or a couple of acquaintances. You, my dear, are not broken. You dance to the beat of your own drum.”