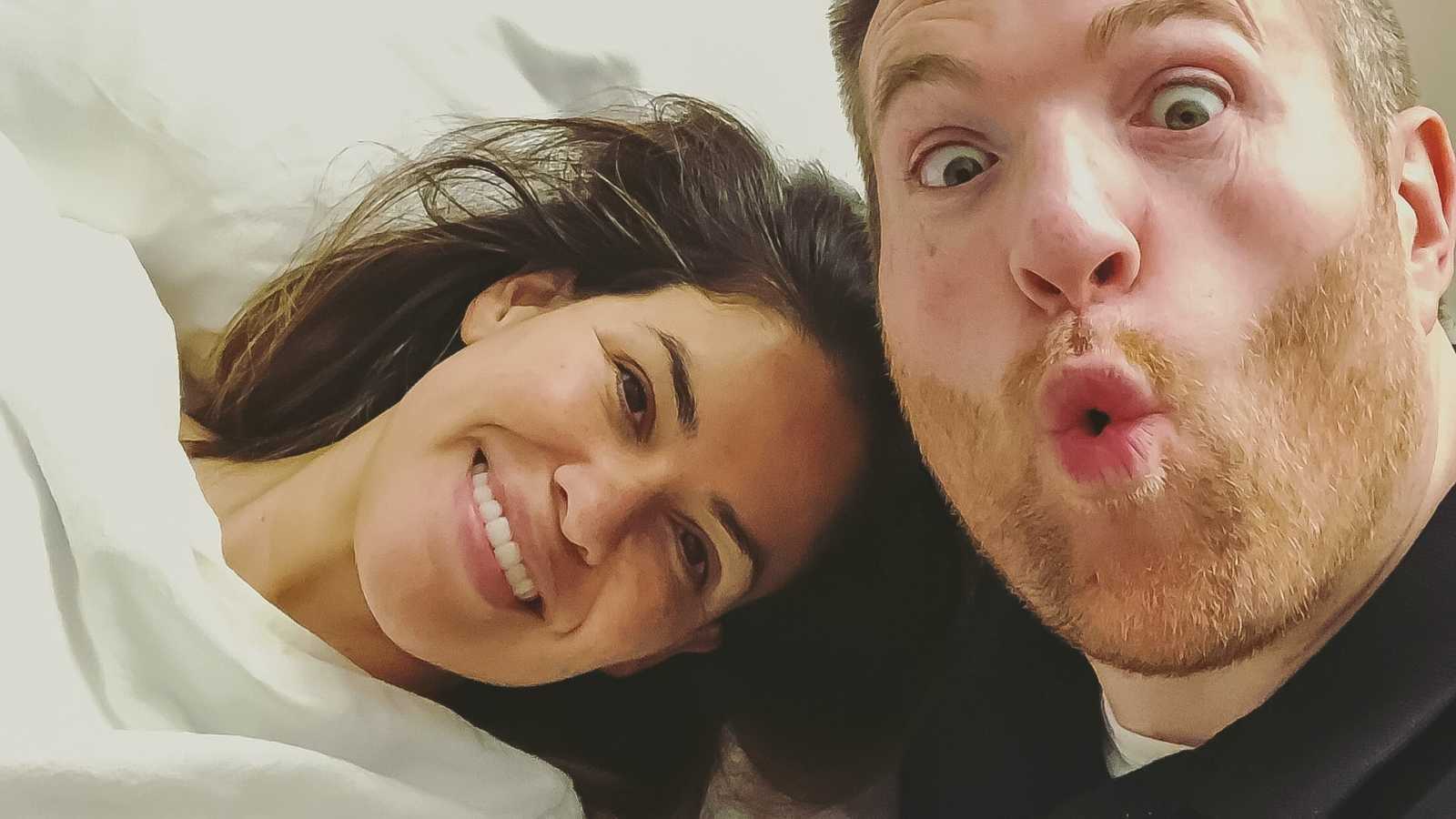 This is a follow up story to Tracey’s pre-Christmas cancer scare story. To read the full back story please click here.

“January 2nd rolled around, and Ryan and I headed to see the gynecologic oncologist. We had to be there so early no one else was in the waiting room but us. It was still dark outside.

I’m all about breaking the seriousness that surrounds places like that. I told my doctor I would try not to pee on him while he did the vaginal exam. (I felt like I needed to pee more frequently.) While he was doing the exam, I told him if I peed on him. He totally deserved it! He laughed and apologized. I mean, there my husband was sitting off to the side and another man (not much older than us) had his hands in my lady parts. Can we agree the situation needed some inappropriate jokes?

My doctor ordered some blood work and an MRI. He confirmed what my other doctors had been telling me. ‘The only sure way to know if it’s cancer we are dealing with or not is to remove the complex cyst and do a biopsy.’

On the way home, I texted my in-laws to let them know what was going on. My mother-in-law asked me if I liked my doctor. My response, ‘Well, I did before he stuck his finger in my butthole!’ I make her proud.

Again, so inappropriate. But as I said, there is no right way or wrong way to deal with a situation like this. This is how I deal with it. I make jokes. And sometimes, really inappropriate ones.

My gynecologic oncologist called a few days later with the results of the MRI. He said the cyst did look benign and he would still do a biopsy to confirm it. I was so relieved! He told me he would attempt to do laparoscopic surgery to remove my right ovary, which would only leave a few scars, and the recovery would be easier and quicker than cutting me open. Of course, it would all depend on once he was in there and how it all goes, as to what he ended up doing. At this point in my life, I don’t care about having scars. I’ve got so many already, what’s a few more?

As I waited for my surgery date to roll around, I got my house in order, so I wouldn’t have to worry about it while I was recovering. I even gave one last speech and continued to teach my group fitness classes.

Nurse: You may get constipated after surgery.

Me: Oh, I will, I always do after surgery.

Nurse: You can take stool softeners, MiraLAX, or if you have to, an enema. Do you know how to do an enema?

Me: My husband does. If I have to do one of those, he can have fun with that.

Nurse: They will remove the ovary through your vagina.

Me (my heart skipped a beat): What? I thought he was going to remove it from my stomach?! How would he remove it from my vagina? Does he pull it through the cervix? Wouldn’t he need to dilate my cervix to do that?

Nurse: No. He would make an incision on the inside of your vagina and pull it out.

Me: No freaking way! Are you kidding me?

Then the fellow who will be assisting my doctor entered the room.

Fellow: Your cyst is the size of a grapefruit.

Me: What? I thought it was the size of a lemon.

Me: Well, a lemon and a grapefruit are two different sizes, so yeah!

Me: Why do you need to take my whole ovary? Why can’t you just remove the cyst?

Fellow: Well, the cyst is so big, it’s taken over your entire ovary. It’s going to be hard to tell the difference between your ovary and the cyst. It distorted your ovary.

Me: So kind of like having a baby? They grow so big, they distort your tummy.

Fellow: For about 30 mins, while your sample is sent to pathology, we will just hang out in the OR and wait for the results.

Me: So, what? Are you going to take some selfies with me while I’m passed out on the table?

Fellow (as serious as all get out): Oh, no. Here at this hospital, we don’t do things like that.

Me: The nurse said you would have to access my vagina to remove the ovary. Is this true?

Fellow: No. Not for this surgery.

Me: Oh, good! Because I’m on my period and I was going to say, have fun with that.

The color never returned to his face.

My doctor enters the room.

Me: I told my friends at the gym you refuse to give me a tummy tuck.

Doctor, laughs: We are going to try laparoscopic surgery, but if I can’t remove the cyst safely or it is cancer, I will need to cut you open.

Me: So, I’m pretty much going to wake up to either a few small incisions or a large cut down my tummy?

Me: Ok, but when I look down, I better still have two boobs. You can’t take those too.

Doctor: Laughs. Yes, those will still be there.

I think my doctor laughed because he has already met me and knows I like to tease, joke, and say inappropriate things. The fellow, poor guy. He seemed so uncomfortable…

At 4 a.m., the alarm sounded so we could be to MD Anderson by 5:30 am. As Ryan and I were walking the halls of MDACC, I felt peace. I had a man by my side who loved me dearly and whose presence alone gave me the comfort I needed. I was at a hospital that had already saved my life once and that I had full trust and confidence in. IV in, drugs to relax me running through my veins, a few more jokes, hospital Chaplain said a prayer, and one last kiss with Ryan before they wheeled me back to the OR. Off to sleep, I went.

When I came to, I asked to see my doctor and husband. My doctor couldn’t come in right away, but they let Ryan come see me. Because I was so out of it and couldn’t lift the blanket to see what he had done to my stomach, I asked Ryan what the doctor told him. He told me his understanding of what the doctor said to him, but my ears needed to hear it from my doctor’s mouth.

When Dr. Shafer walked in, I asked him how it went. He said the cyst turned out to be what’s called a borderline ovarian tumor. Which is not what Ryan told me, bless his heart. He tried to relay the information correctly but didn’t quite get it right. Dr. Shafer said he wanted to monitor me for 5 years because this tumor can come back to my other ovary, and sometimes it can come back as cancer. He let me know the final pathology report would be ready in about 7 to 10 days and when it was, he would call me.

As he was leaving my room, I asked him if my insides were beautiful, and he said ‘Yes’. Just making sure! Because we all know what our insides look like is far more important than what our outsides look like. Literally and figurately.

That afternoon, I was released to go home. While waiting on the final pathology report, I focused on finishing this book and giving my body time to heal.

My doctor called me today to let me know what the pathology report said. It confirmed I had a Serous Borderline Tumor, also known as a low-malignant potential ovarian tumor. It isn’t benign because the cells are abnormal but not considered cancer because the cells are not invasive like ovarian cancer. I’m not going to act like I fully understand it, but it sounds like good news to me. He said chemo and radiation were not needed. Can I get a Hallelujah?”

This story was submitted to Love What Matters by Tracey Ferrin, 36, of Houston, Texas. Tracey’s new book “Up Struggle” is available now here. Follow her journey on Instagram here and Facebook here. Do you have a similar experience? We’d like to hear your important journey. Submit your own story here. Be sure to subscribe to our free email newsletter for our best stories, and YouTube for our best videos.

‘I think you need to go buy me some diapers.’ I hung my half-naked self off the side of the bed and peed in the bowl.’: After laparoscopic surgery, woman says husband’s care is ‘real love’

‘I feel off. It could be minor. I don’t know. I just know something is off.’ My friend diagnosed me with perimenopause. ‘That’s not what I’m dealing with.’: Woman anxiously awaits results over holidays to see if cancer has returned, ‘We don’t want to worry our kids’ 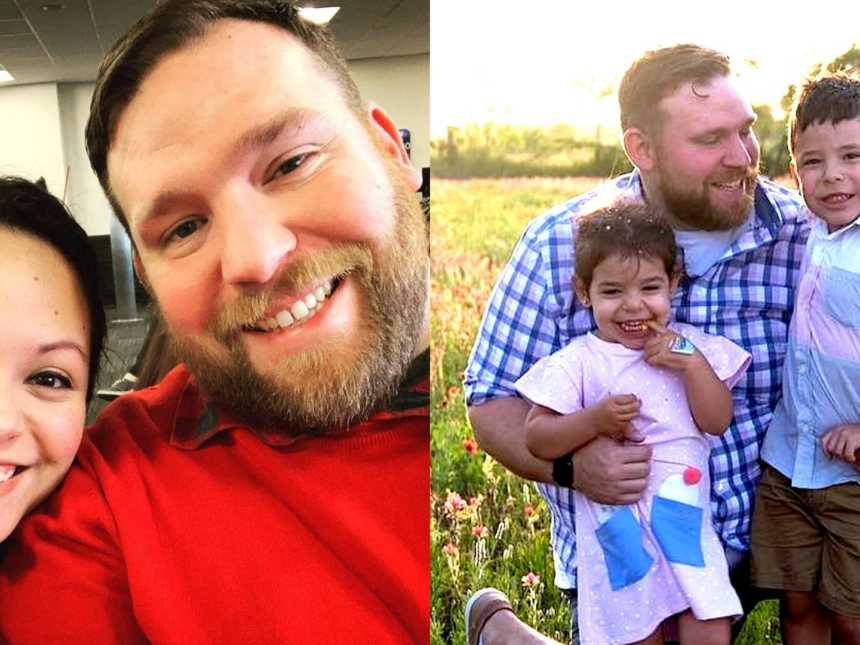 ‘Of course you’re OK!’ He’s 36, the prime of his life! ‘We don’t need sirens.’ Halfway there, the sirens turned on.’: Widow shares grief journey, ‘This won’t define our family’