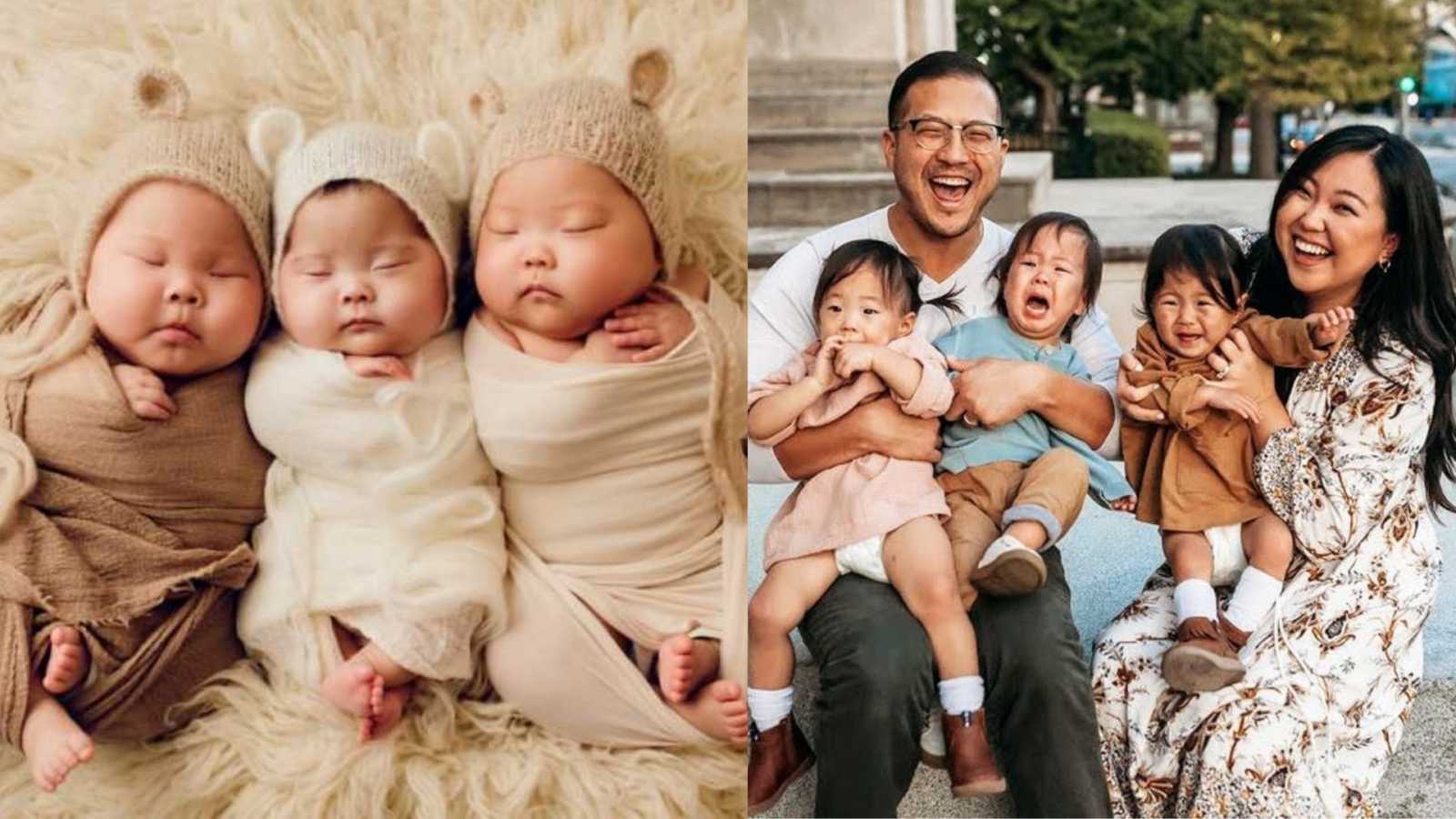 “If there’s one thing I’ve always struggled with in life, it’s been asking for help from others. I’ve always been the one who jumped at the chance to make a meal for someone or give them a ride somewhere, but told myself I could handle all my problems on my own. I hated the thought of being a burden to anyone. I also hated the thought of anyone pitying me or seeing my struggles as being weak. It was really a pride issue for me, at the heart of it all, for not asking or accepting help when I really needed it. But God saw through my facade, my need for full control, and called my bluff when he surprised me with triplets.

My pregnancy journey had been anything but easy. When my husband and I married in 2015, we got pregnant right away. All of my dreams and plans of being the mother I always wanted to be started falling into place. But as quickly as all of my best plans filled my head, they were just as quickly whisked away. I had an early miscarriage, and for the next year and a half, I struggled with unexplained infertility and all the anxiety, depression, and loneliness that came with it. I kept it all to myself, determined to figure it out on my own. We eventually landed on the help of my doctor who prescribed me a medication called Clomid which essentially kick started my body to ovulate. With a little bit of science and love, we found out I was pregnant again on Mother’s Day of 2017, of all days! It was then again I thought to myself, ‘Alright, we’re back on track!’ All the cobwebs that had settled on my dreams and plans of having a baby were dusted off.

A few days before my initial prenatal appointment, I was rushed into our OBGYN’s office due to some bleeding. Petrified I was losing the baby again, my husband came to meet me while they performed a quick ultrasound to make sure everything was okay. As I was lying there with my husband at my side, and the sonographer began showing us the images of my uterus, she announced there was indeed a sac. Just as we were breathing a huge sigh of relief, the sonographer apparently wasn’t finished. ‘And there’s a second sac…’ Whoa. Twins?? COOL. We looked at each other in amusement. ‘…And a third sac.’ Silence. My heart stopped, and all of a sudden I was terribly confused. ‘No way,’ I said to the sonographer, half smiling and fully hoping she was making a joke. ‘Oh my God, triplets…,’ was my husband’s response, ‘How are we going to do this?’ We left the OBGYN’s office that day not knowing just how much God had in store for us, the blessings we would receive, and the lessons He planned to teach us about ourselves, each other, and surrendering control by allowing others to be there for our family.

Having triplets swung the door wide open for the opportunity of community and social supports to carve its home in our lives. As soon as we got the news we were having not one but three babies, I immediately went to Facebook in search of community. I found a group specifically for moms who were pregnant with triplets or had birthed their triplets in 2017. I was surprised when I learned this group had over 500 members! Women from all over the globe who were currently going through the same shock, anxiety, struggles and joys of raising triplets. Until then, I felt so alone and in the outfield of being pregnant with three babies when all of my friends around me were only having one. I felt connected to this group of women immediately as they started sharing advice and stories specific to triplets. Because of them, I was able to find baby items that were beneficial for having three newborns (e.g. finding car seats and a triplet stroller that fit in our car), strategize how to feed and sleep train three babies at the same time, and navigate a new level of stress in our marriage. I felt so prepared, encouraged, and excited to meet my triplet babies thanks to the newfound mom friends I had made online.

Fast forward 7 months, my babies were ready to make their debut. Normal full term babies usually hang out in their mother’s womb for another couple of months, but multiples tend to come earlier. In my case, a lot earlier. At around 27 weeks of my pregnancy, I began experiencing early contractions. While I went back and forth on hospital bed rest for days at a time, I had a handful of visitors pay me a visit to offer me company and support in the form of care packages and meals. One was a local triplet mom who I had recently connected with online. I couldn’t believe someone I had never met went out of their way to reassure me everything was going to be alright, but what comforted me more was that her reassurance came from a place of experience of having triplets herself. She told me how there was a local group of triplet moms all over the city who gathered once a month for dinner to connect with other triplet moms.

My triplets decided at 29 weeks and 4 days they had had enough of sharing the womb and made their entrance into the world on November 7, 2017. All three collectively barely weighed 6 pounds. My c-section went quickly and smoothly, but there was no time for me to officially meet my babies until a day later. As I was recovering from my surgery, my babies were immediately whisked away into the NICU. From that point on, everything was a blur as is with having any newborn. As a new mother trying to make her own recovery, there was so much to do and so much information to digest in trying to keep up with three frail babies.

I began pumping breast milk immediately every 2-3 hours for them which was a ‘round the clock job of its own. My husband and I would only go home to eat dinner and sleep so we could drive back to the hospital in the morning. Going to the NICU and spending time with our babies, holding them skin to skin for hours at a time, speaking with numerous doctors and hospital staff, pumping some more milk everywhere and anywhere, then coming home at the end of a long day became a full time job for us. During that time, we relied on the kindness and generosity of our family, friends and at times even strangers. My community organized and dropped off meals to us every night for months. I had other moms of multiples I had never met drop off boxes of gently used baby clothes and toys. Our family made sure my husband and I were fed and our house was clean. We built up a room full of diapers and wipes gifted by family and friends. I started going out to monthly dinners with the local triplet moms group and started to meet more moms whose babies were born around the same time as mine.

Once all three of my babies finally came home from the hospital after four long months, I faced a new struggle of juggling everything on my own. While my husband went back to work, I was alone with three babies feeding them, changing them, and still pumping every three hours. I didn’t have time to eat, sleep, or sometimes even go to the bathroom. One of my triplets who had the most complications at birth still had a slew of follow up appointments with multiple specialists all over the city. This created a logistical nightmare of trying to figure out if I should bring all three newborns with me by myself to doctor appointments or just take my one child and find childcare for my other two, which created so much stress and anxiety for me.

I had a hard time letting others in to carry my load when I obviously was bursting at the seams. But once I started to relinquish some control and started asking friends, family, and neighbors for help, I also started to feel some of the weight lifted off my shoulders. I asked them for help to come watch my babies while I took another to an appointment. I asked them for help to come with me to the babies’ appointments. I asked them for help to babysit so my husband and I could enjoy an evening out by ourselves. I learned all of my longstanding fears of feeling like a burden or feeling pitied simply weren’t true. People were more than happy to offer a helping hand. They didn’t see me as a burden, they were ecstatic to come and spend time with my babies.

It’s very common for new mothers to feel isolated when they’re home alone with their newborn day in and day out. I was fortunate to have solid social support surrounding my family and grateful for the online community of moms who walked that journey alongside me. I just needed to set aside my pride and apprehensions to let others in and be there for me. If it’s true when they say it takes a village to raise a child, imagine the amount of help I received to care for my triplets. Don’t be afraid to reach out and ask for help, because you’re not alone.”

This story was submitted to Love What Matters by Rachel Cho of Fishers, Indiana. You can follow her journey on Instagram. Submit your own story here, and be sure to subscribe to our free email newsletter for our best stories, and YouTube for our best videos.