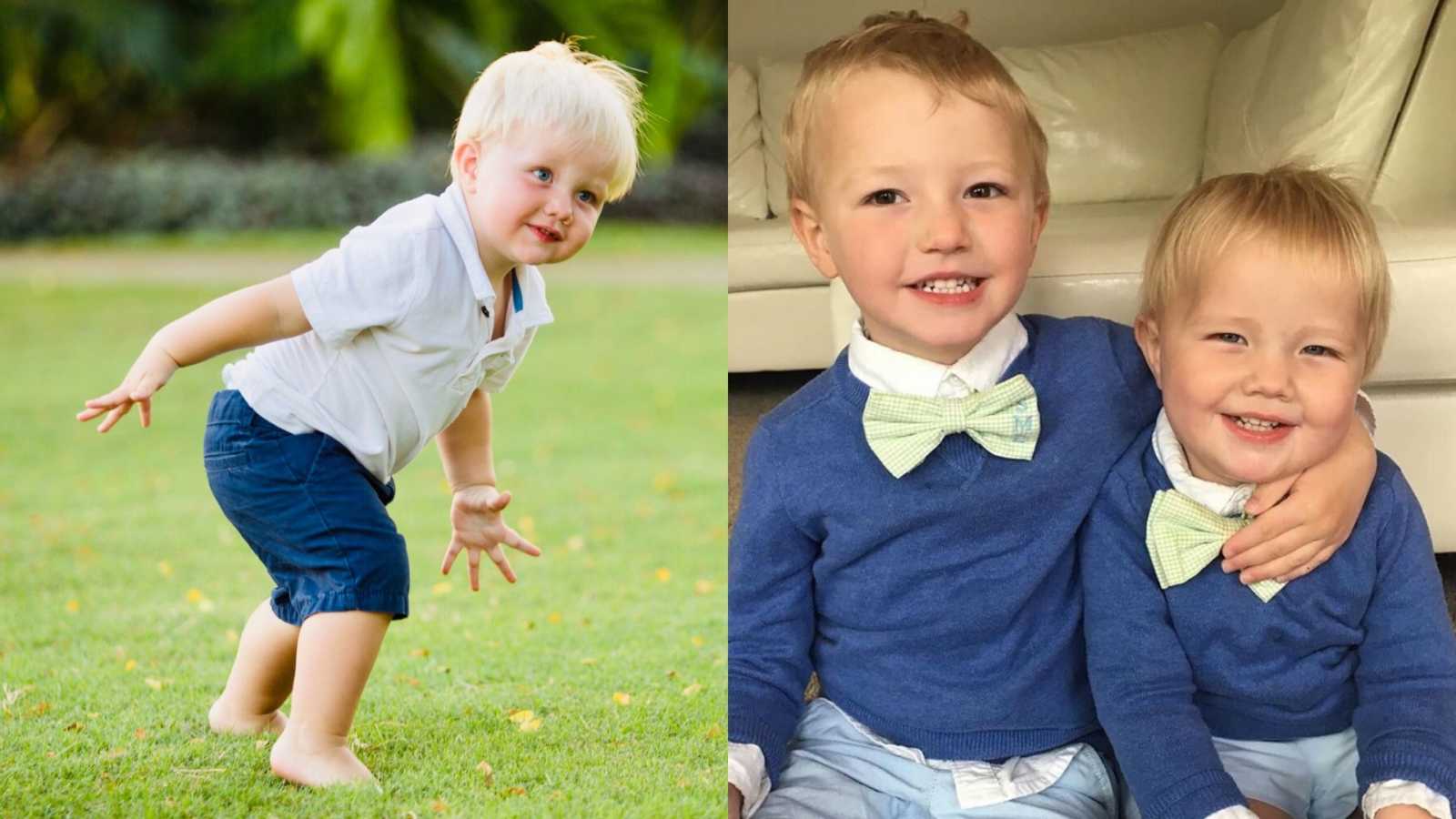 “The summer of 2017 was idyllic. We had everything we could have dreamed of–a happy marriage, a beautiful home in Boulder, Colorado, two adorable sons ages 3.5 and almost 2, and a daughter on the way. We had spent most of the summer poolside in Boulder and beach-bound in California and Hawaii. Our boys loved to play Transformers, and Charlie, our younger son, would point to airplanes and helicopters in the sky shouting, ‘the guys!’ which was an endearing impression of the transformers slogan, ‘robots in disguise.’

But on August 11, 2017, everything changed for our family. That morning, despite us checking on the boys at 6 a.m. and everything seeming normal, Charlie would never wake up. At 7 a.m., we found him lifeless. His body was still warm. We had missed him by a number of minutes.

My husband found Charlie first. I was still in bed when I heard him scream, ‘Kjerstin, call 911, Charlie’s not responding!’ Although I could sense the terror in his voice, I thought he was overreacting. I had literally just been with Charlie and thought there was no way this was possible. I got out of bed and grabbed my phone off the charger, just in case I did have to call 911. My husband was standing next to the bed when I walked in. My phone fell to the ground and I grabbed Charlie by the arms. I started screaming at him to wake up. He wasn’t breathing. I couldn’t comprehend all that was transpiring. I started CPR. My husband went downstairs and called 911. I also called 911. I was screaming at them to send the paramedics in between giving Charlie breaths. I was trying to count my chest compressions but it was difficult to keep track through my hysterics with the dispatcher. The paramedics arrived with the police 13 minutes later. I told them, ‘We need an AED, he’s not waking up. We have to shock him.’ They were already setting it up as I was yelling at them. They kept tapping his feet saying, ‘Wake up, little baby, wake up.’ I left the room. I knew he wouldn’t come back. I knew after 13 minutes of CPR, he was brain dead. I knew I would have to deal with this new reality.

We didn’t hide the facts from our older son. We went into his room while the paramedics were there and explained to him Charlie did not wake up and he wasn’t coming back. He went to be with Jesus in Heaven. We kept apologizing, not knowing what happened or how this could possibly happen. The first thing our son said was, ‘So Charlie isn’t going to turn 2?’ because his birthday was just a few weeks away–the party was already planned. We told him that he was correct. He wouldn’t turn 2. Then he said, ‘And Charlie isn’t going to go trick-or-treating with us?’ Again, he would be correct.

It would be many months before we would discover Charlie died from what was believed to be a virus. His only symptom was a fever the night before that lasted no more than an hour or two. I remember checking on him at 10 p.m. after I had come home from dinner. He felt warm and I gave him some Tylenol he spat out. At midnight, he called for me because his diaper had overflowed and he had wet the bed. I did a thorough check of him, nervous that he wasn’t feeling well still but he was perfectly fine. His fever was completely gone, he was in great spirits, and his coloring was healthy. This was not a sick kid.

He wanted to go downstairs and watch Mickey Mouse Clubhouse. He pointed to a picture of his brother on the wall and yelled out, ‘Baby,’ as he always did when we would pass by that picture. I proceeded to our daughter’s room so I wouldn’t have to change his sheets and remake his wet bed in the middle of the night. He went to sleep soundly. I continued to check on him throughout the night as I was woken up by a variety of different factors. Each time, I marveled at how peaceful he was sleeping because normally he would snore. I have to remind myself constantly there was nothing I could have done given the information I had.

Following this tragedy, there was unspeakable grief, endless tears, and the deepest sadness. Even more than two years later, the grief attacks may become less frequent but their intensity doesn’t change.

Community took on a new meaning for us after Charlie’s death. During the weeks after, while police investigations ensued and funeral arrangements were made, it was our family and friends who rallied around us to support us however possible. Whether bringing us meals, planning play dates with Scottie, or driving me to doctor appointments, there was no act too small to show support. Family and friends from all parts of the country came to grieve with us. And the love and support extended beyond just us as parents. Charlie’s brother was invited to a special scrimmage of the CU football team. Our family was honored on the field at one of the CU Buffaloes games. Memorials were created all over the town in honor of Charlie. Even our unborn daughter was showered with gifts. Every day for nearly a year, we received something special in the mail for someone in our family.

With the help of our community, we slowly began to regain strength. And we saw the incredible impact the community support had on our surviving son. Out of our tragedy, an idea was born. In May 2018, we founded Charlie’s Guys–a nonprofit organization aimed at providing experiences and gifts to bereaved siblings as a way to remind them that they are loved and not forgotten.

It’s been over two years since we lost Charlie, and the grieving and healing process is just that–a process. It will never end and it will never be something we conquer. It doesn’t get easier, but we do get stronger. Grief is debilitating so if we can help bring a tiny bit of light into something so deafening and dark, then we have not only made Charlie’s death purposeful, but we have also made our lives purposeful.”

This story was submitted to Love What Matters by Kjerstin Davies from Boulder, CO. You can follow their journey on Instagram. Do you have a similar experience? We’d like to hear your important journey. Submit your own story here. Be sure to subscribe to our free email newsletter for our best stories, and YouTube for our best videos.

‘He was sleeping late. I became suspicious, pulled the blanket back. My son had been dead for at least 8 hours.’: Mom begs parents to spend time with children now after 8-year-old son dies in his sleep, ‘we wish we had more time’

‘Honey, they’ve tried reviving him 6 times. He’s not coming back.’ ‘No, he’s going to live!’ Deep down, I knew he was right.’: Mom loses son to fatal car accident, finds ‘beauty in the ruins’ of child loss

‘Sweet boy, Mommy and Daddy love you so much.’ His silent 3-pound body was wrapped in a blanket.’: Parents of child loss know they will see son ‘in heaven,’ celebrate living twin’s life while grieving their loss

“I walked through much of my life feeling like an orphan, a child that fell victim to parental alienation. I am a child that was born, yet never raised. I should have ended up addicted and broken, just like my mom wanted me to be. I didn’t.” 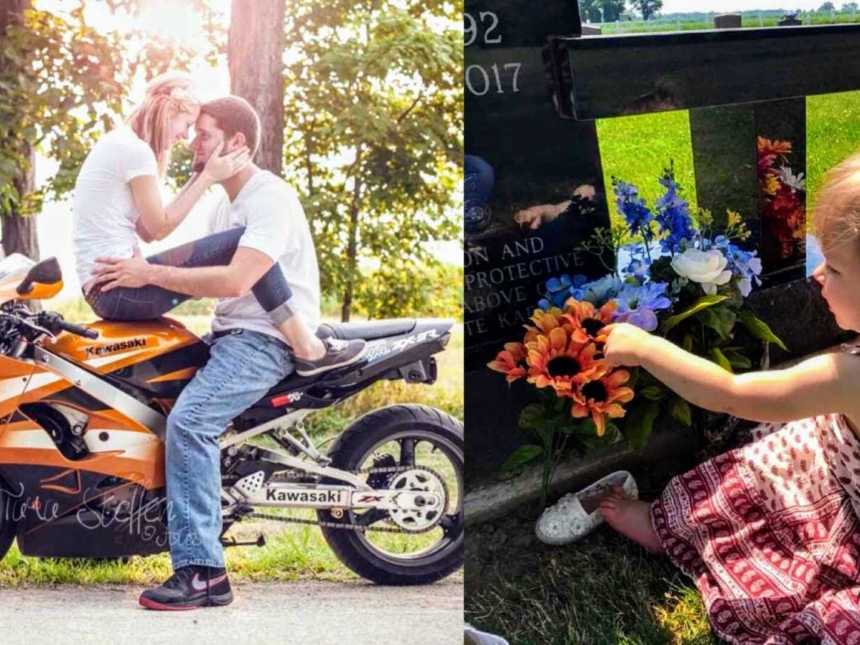 ‘If I ever go on my bike, know I died happy!’ He gave forehead kisses, backed out of the driveway. ‘Byeee Charlotte, daddy loves you.’: Woman loses husband to motorcycle accident months after giving birth

“He gave us forehead kisses. ‘Byeee Charlotte, daddy loves you,’ and backed out of the driveway. My phone rang. I remember answering to hear concern on the other end. ‘What’s Brandon doing?,’ they asked. ‘Oh, he’s out on a bike ride!’ There was a long pause.”