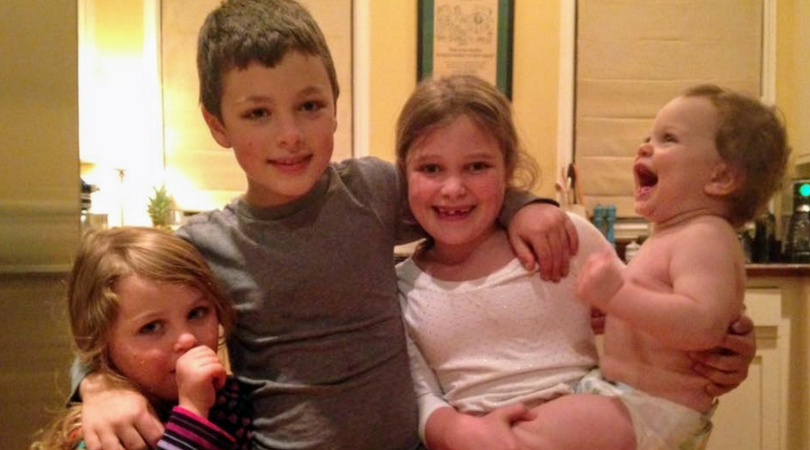 “Life has been hard lately, you guys. Things feel heavy. The news is full of tragedy and loss, the mail is full of bills, and my youngest woke me up this morning by peeing on my pillow.

And I’ve just been so unbelievably tired. I want to go to bed and pull the covers up over my head and cry until everything has been purged and then sleep until I can wake up and there is something good going on in my head and in my house and in the world.

The other night in the kitchen, I was making some food for a friend who had recently given birth. A small child clung to each of my legs, both wailing to pass the time while their older sister cut them strawberries and cheese for dinner because we have reached the point in life where dinner is more of a mass foraging than a formal event.

When the littles’ wails dulled enough for me to hear her, she said back to me over her shoulder, ‘This woman you are doing this for, this is her first baby?’

‘Should you tell her?’

I looked away from what I was doing, over the mess of dirty children with fingernails that needed to be clipped digging sharply into my calves and asked her what she meant.

‘Should you tell her about this,’ she explained, gesturing towards us with the knife she was using to cut the fruit. ‘You know, about how hard it’s all going to be?’

This girl. She’s young. And she was so spot-on that I started to cry a little.

But it’s not the pee that I cried for, not the wailing or even the dirt that I would later wash out from the fingernail divots in my legs. These things are the background hum of my mother-life, my normal. I can take these things, I can – usually – even laugh about these things. I can clean, fix, calm these things.

It’s the bigger things, so commonplace that I worry they’re becoming the backdrop of our collective human life. It’s the election. It’s the losses, one after another, public figures we loved and people we know personally, each deeply felt and dearly missed.

It’s mass shootings and it’s hate and it’s the ugly things I see people saying to each other – on billboards and on TV and in my social media feeds. It’s the radio playing underneath our lives in the kitchen, sending out a steady stream of scary news and divisive opinion.

This is the world I am sending my babies out into?

Someone asked me the other day why I was so upset. I struggled to answer. ‘How are you not?’ I replied.

I so badly want a better world for these guys. Part of me wants to fight, and part of me wants flight, and mostly I sit paralyzed between the two extreme instincts, tripping over my words and secure in my mundanities: wiping countertops, folding laundry, filling bellies. I feel powerless and weak. That’s enough to make anyone want to go to bed and pull pee-scented covers up over their heads.

But it’s been weighing on me these last few days, the need to engage these babes in some dialogue about this, while at the same time trying not to scare the crap out of them. Finally – standing there in the kitchen – I figured out my angle.

‘You know what this is?’ I asked Maria, gesturing towards the radio the same way she had gestured towards her little brother and sister. ‘This is your revolution.’

She nodded, thought for a minute, recognizing with solemnity the weight of the responsibility. Her shoulders are young, broad. She has room on them for this.

‘Things are changing,’ I went on, encouraged. ‘They are. This is how change happens…first the darkness that is so deep and startling that it’s hard to breathe and you feel helpless, and just when you think you’re going under – there comes the light.’

I looked at her, wondered if she got me.

She is the one that’s going to change the world, the girl who is cutting enough strawberries to feed her little brother and sister even though she doesn’t have to and even though they won’t stop wailing long enough for us to even have this discussion.

They are the revolution.

It’s harder to feel powerless when we stop looking at the world out there and look instead at the world in here: in our kitchens and in our family rooms and in our beds. We are raising the revolution, and all we have to do to make it work, I think, is teach them not to hate.

They don’t have to learn tolerance and love and empathy and compassion and kindness. They know those already.

They came out that way.

This story was submitted to Love What Matters by Liz Petrone. The article originally appeared on her Facebook page. Submit your story here, and be sure to subscribe to our best love stories here.