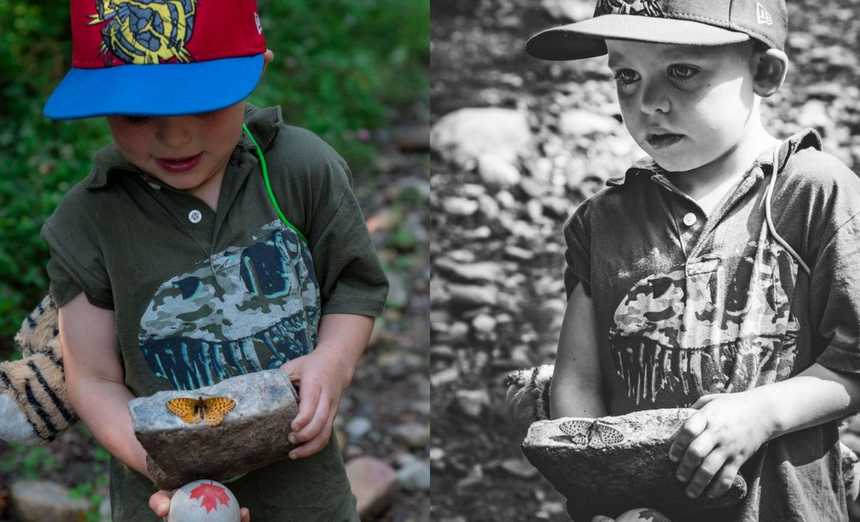 “My son was born with this insane ability to attract animals. In his four years on earth he has developed an almost Dr. Doolittle relationship with them, and it has affected life a great deal. His spirit animal seems to be the cat. I have never seen, or owned,  more cats than I have since Maverick was born. When I was five months pregnant, a tiny kitten with huge blue eyes became obsessed with me — correction, my belly. I instantly knew when I met it that it was not my energy he was attracted too. Six months later, I would give birth to a beautiful big blue-eyed baby, and I would name him Maverick. He would go on to be obsessed with all things feline. Every stuffed animal that became a staple was of some sort of cat variety. His current lovey being a tiger he carries everywhere. On our recent camping trip it became glaringly clear that Maverick was living up to his name.

See, a Maverick back in the day, was a rancher who didn’t brand their cattle because they felt it to be inhumane. In this way they were considered ‘rebels.’ It often makes me smirk how masculine and rebellious the name’s connotation has translated. Especially considering it’s basis was on the grounds of empathetically taking care of animals and raising a cruelty-free organic farm.

As an animal softy myself, I can admit the situation has gotten out of hands sometimes. However, on our road trip this summer, the healing part of his personality really started to show. At our first location, Maverick found a moth who had been caught out in the rain. He protected the moth, named him, made a bed for him on his Frisbee, and than proceeded to take the moth everywhere. He played with the moth on the park, ate with it by the fire, asked me to take photos of him and ‘mothy’ and put it out in the sun because he felt his wings would dry faster. Later on when Maverick found the moth not on his Frisbee, we rejoiced and celebrated that the moth had been healed and was ready to see his family again. My little boy then looked at me and said, ‘I’m going to miss him, but I’m glad he’s feeling better.’ He teaches me how to appreciate things in the now, and be grateful for the opportunity to experience happiness.

We would later find a moth stuck to a plastic tub, of which I’m sure there was no relation.

A few days later, after a beautiful wedding and some family time, my little family would head off to go camping in the mountains. On a rather steep, rocky, difficult hike, we encountered dozens of butterflies. They were flying back and forth over the path, and to be honest, it felt like I was in the enchanted gardens. All kinds of butterflies in all different colors surrounded us. We stopped to see groups of butterflies at some areas, and tiny waterfalls. Maverick of course would be magnetically attracted to the one butterfly in the grass with a broken wing. His first instinct was to sympathize with the butterfly not being able to get to the top of the mountain like all of his butterfly friends. ‘Butterflies fly mom. This butterfly can’t do that,’ was his obvious statement to me, asking him not to do what I inherently knew what was coming…

My beautiful soul of a son then found a rock I considered disproportionately large for the task at hand. He crouched down, and as if inviting him — this beautiful tiger striped butterfly hops up on his mountain chunk of rock and proceeds to sit on it, joining along for the ride. I would later do some research and find that this tiger looking butterfly is called a Great Spangled Fritillary, and they are known to be quite skittish. Even a photo of them is a challenge for butterfly collectors.

My 4-year-old proceeded to carry the butterfly up the hill with no sign of ever putting it down. This butterfly would make it to the top of the hill if it was the last thing he did. The determination in his eyes is what inspired me to take the photo. To be honest, I found the hike quite challenging myself, and by this point, I was out of breath and ready to call it quits. I had no idea how he could carry this rock so steadily up such a steep climb.

About 15 minutes after collecting the broken tiger butterfly, he would amaze us by flying away, broken wing and all.

‘He can fly even with a broken wing, Mom!’

‘Yes Babe, because there’s no one there to tell him he can’t.’

It’s amazing what our children learn when we take them out into nature to explore. But I think what was even more of a miracle, is what I learned from them.”

This story was submitted to Love What Matters by Kayleigh C. Lynds of 16 Seasons photography in Alberta, Canada. Submit your own story here, and subscribe to our best stories in our free newsletter here.