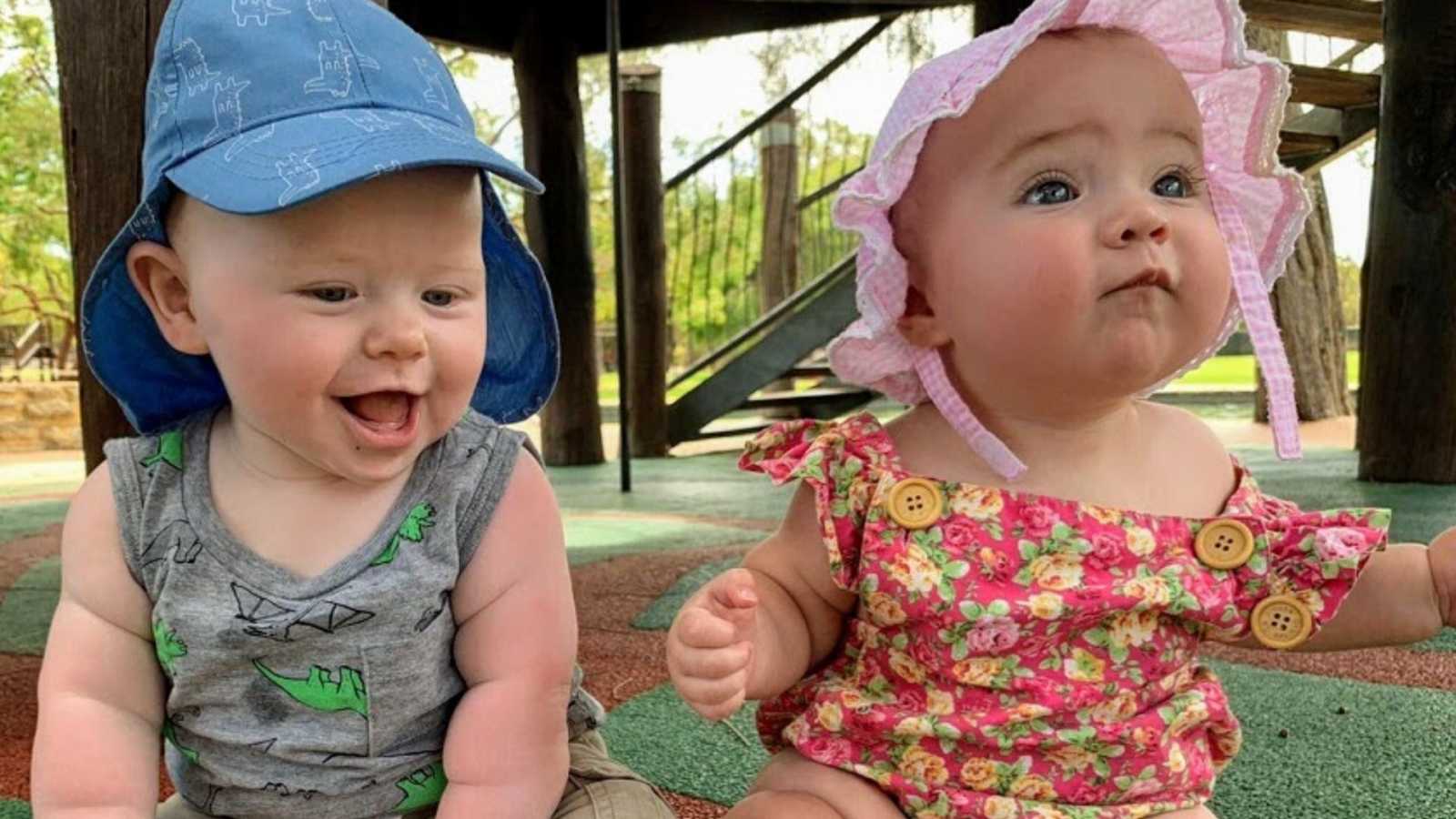 “When my brother and his partner announced their pregnancy, we were all pretty surprised, but the real shock came when they told us the due date. July 25th. Their baby was due the EXACT same day us ours! I’ve always been a fairly competitive person — so, from that moment, the race was on.

My brother and I have always been close, but not to the point where we shared baby-making plans with one another. My son, James, had just turned two when we decided to try for another baby. I always knew I wanted two children, and once James was two, we both felt ready for another baby. A few months later, I was pregnant and our families were so excited to hear our news that a second grandchild was on the way.

My brother and his partner had been together for a few years, but I never got the baby vibe from them. I really thought they might never have children, and I was sad to think my kids might not have any cousins to grow up with.

Just a few weeks after we announced our baby news, however, they dropped their news too. ‘Guess when our baby is due?’ I remember them asking with a smirk on their faces. I couldn’t believe it when they told me. What were the chances?

Everyone was happy but also amazed by the coincidence. ‘Was there a massive power failure in Perth that night?’ joked my friend.

We are sensible people, of course. We realized due dates are just estimates and babies rarely arrive on time. These babies could be born days, weeks, maybe even months apart from each other.

As our pregnancies progressed, every milestone, every doctors appointment, every ultrasound was shared with my sister-in-law. It was quite nice to share such a special experience and be able to compare each stage. I had horrific morning sickness for my first twenty weeks to the point where I was vomiting every day and bed ridden, but my sister-in-law felt completely fine. Later in the pregnancy, however, she suffered from heartburn and carpal tunnel syndrome which I managed to avoid, luckily.

As we reached the final trimester of our pregnancies, it was looking like it was anyone’s race to win. With my first pregnancy I went over 40 weeks, so I was convinced it would be the same again the second time round. By 37 weeks though, I was completely miserable. Everything hurt, I couldn’t sleep, bending over was a luxury of the past and I was more than ready to push that baby out. At around the same time, my sister-in-law started to feel very itchy. Luckily, she mentioned it to her doctor and her doctor imminently ordered some blood tests.

On Wednesday the 10th of July (38 weeks now), I woke up so grumpy and tired. I remember going grocery shopping and crying because the trolley I picked out had a squeaky wheel. Everyone in there was looking at me as I squeaked around the store, and I was too pregnant to walk back to the front of the store to swap it. Soon after the horrific trolley incident, my sister-in-law rang with some big news! She’d just received the results from her blood test and had been diagnosed with obstetric cholestasis . Her doctor recommended she be induced the following day. I called my husband in tears. ‘She’s having her baby tomorrow, and I still probably have weeks to wait!’

Well, my body must have heard the news because bright and early the following morning, I woke up having contractions. I thought it was just Braxton Hicks at first. Only 38 weeks after all — much too early. But within an hour, they became very painful and just 6 minutes apart. Off we went to the birth center, and after just two hours of active labor our beautiful baby girl, Grace Anna was born at 12:15 p.m.

My family, who all knew Rachel had been admitted to the hospital that morning to be inducted were all patiently waiting around for her big baby news. I didn’t tell anyone when I went to the birth center, so I can only imagine my mom’s face when I sent through a photo of our brand-new baby girl.

My sister-in-law had began the induction process that morning, but her labor was progressing slowly. I sent my brother a photo of Grace, and he told me later he just stood there in the hospital laughing. ‘Rachel better hurry up,’ he said. ‘She better not ruin this chance to have birthday twin cousins!’

Finally, after a long labor which resulted in a c-section, my beautiful nephew, baby Rex, was born that evening at 9 p.m. It was spooky to think both babies were due on the same day, but then, due to circumstances completely out of our hands, were both born two weeks early.

The 11th of July: an incredibly special day for all our family. I gained a daughter, a nephew, and a cousin for my children to grow up with. My parents received two new grandchildren, and I’ve never seen them so thrilled.

Grace and Rex are now 6 months old. My brother has chosen to be the stay-at-home parent with Rex, and we’ve never been closer. We see each other at least 1-2 times a week, and the babies are really starting to interact and play with one another. It’s a beautiful thing to see.

It’s been a wonderful 6 months but a big adjustment for all our family, in particular for my son James. For nearly the first three years of his life, he was not only our one and only child, but he was the one and only grandchild on both sides of our family. Suddenly, he has had to share his mum and dad with his sister Grace and share his Nanna and Grandad with both Grace and Rex! We’ve had some difficult days and some long, tiring nights, but of course, it’s all been worth it. Every day it gets a little easier and hopefully it won’t be long before Rex and Grace will be able to play with their big cousin and brother, James.

When I was a little girl, I always dreamed of having twins one day. There’s something so special about twins. As I got older though, the thought of caring for two babies simultaneously was a scary one. I feel so grateful now that I get to watch these ‘twousins’ play and grow up together, but at the end of the play-date, I get to take just ONE baby home.”

This story was submitted to Love What Matters by Carly Busby. Submit your own story here. Be sure to subscribe to our free email newsletter for our best stories, and YouTube for our best videos.