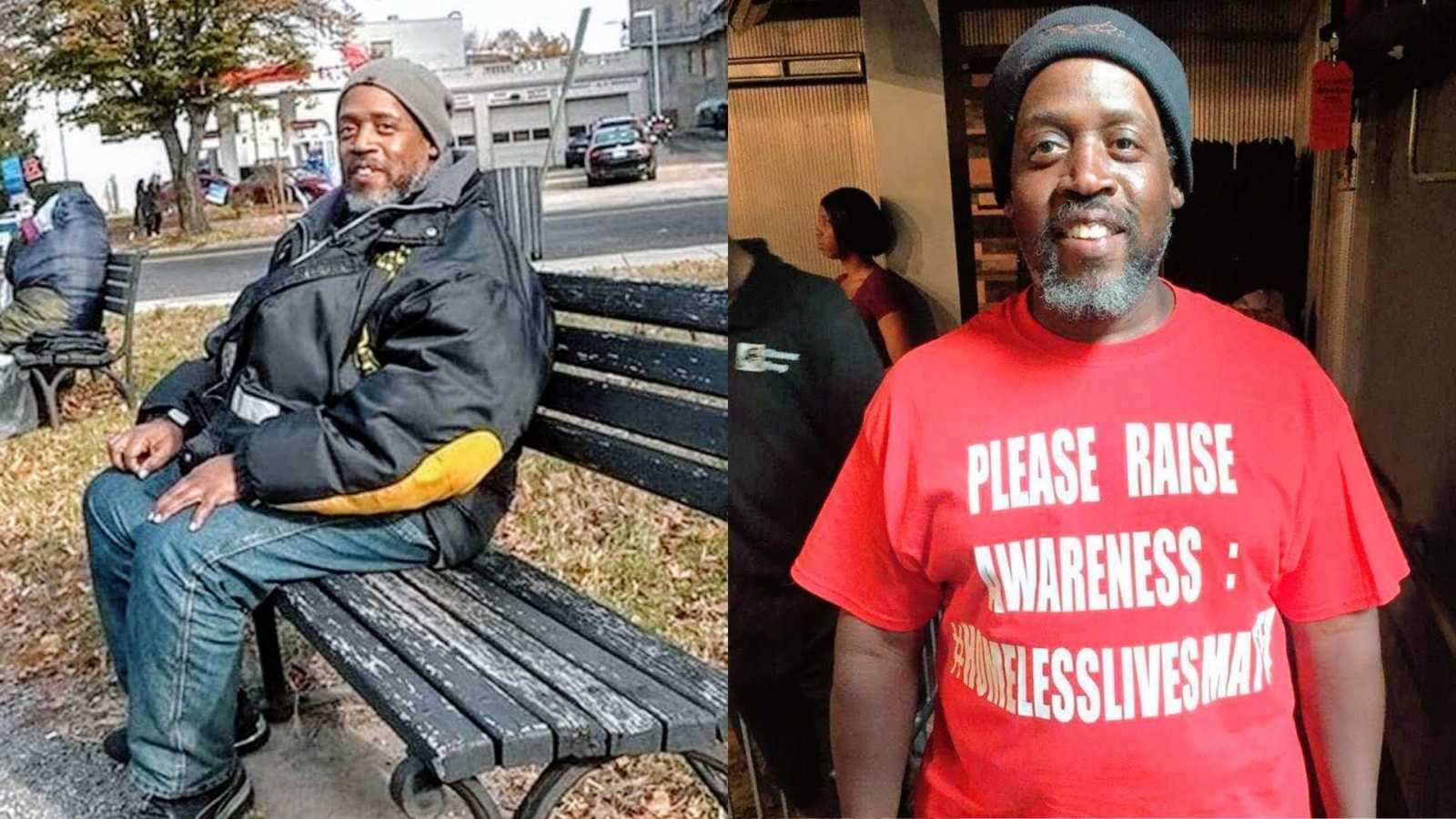 Charles Purcell was born in Pittsburgh, Pennsylvania. He moved to the Washington, DC area back in 1984, and has been homeless since 2015. Today, he is using his voice to change the world and better the lives of his community.

How did you end up homeless?

I ending up homeless after losing my job in December of 2014. In March of 2015, I was no longer able to pay my rent. So, I became homeless a second time.

My life had been a rollercoaster ride after the death of my mother in 1992. I was living a lie. Living beyond my means. So, there were periods when I was ‘homeless,’ but not for long. I was gainfully employed, so I was always able to find someplace else to live relatively soon.

But in 2008 everything came to a head. I was homeless with no job.

I had given up and thought I was destined to die on the streets. But by the grace of God, I was led to a church called Emory United Methodist Church. I re-dedicated my life to God and became active in their homeless ministry. I knew I was being called to help the homeless, but didn’t know in what way.

God blessed me with a job and life was good. I found a place to live and was being blessed. In 2010, DC, along with the mid-Atlantic states, was hit by Snowmageddon. Church had been canceled for several Sundays. During the time I stopped attending, I fell back into bad habits, living for myself rather than God. I became irresponsible again. I know now everything took place to get me back to a place of submission. To stop running away from my purpose, but walking in it.

As I was walking the streets of DC late at night in March or 2015, I noticed a homeless woman sleeping on the sidewalk. Not focused on my situation, I said to God, ‘Why is this going on in this country? We are the richest country in the world. People should not be living like this.’

Then, in the quiet of the night, I heard a soft whisper speak to my spirit saying, ‘Now you know how I feel…’ I understood at that moment why I was in the state I was in. I knew I had to stop running and walk in my purpose, trusting God 100%. Not knowing where the road would lead, but trusting in Him who was leading me. God personally saved me.

What would you like others to understand about the homeless community?

The major thing I would want people to know is that the majority of the people who are homeless aren’t lazy or looking for a handout. Most are looking for a hand-up. Martin Luther King Jr. once said, ‘It’s all right to tell a man to lift himself by his own bootstraps, but it is cruel jest to say to a bootless man that he ought to lift himself by his own bootstraps.’ This quote really resonates with me.

Most people that are experiencing homelessness are working, about 40%. There are mental health issues, addiction issues, and gentrification issues. There is no broad-brush issue. Homeless people are people. People need hope. Folks are just trying to survive. Sometimes people will make bad choice to survive. People need to have compassion and empathy. Because anyone of us can become homeless at any moment. Looking down on people is not and never will be the answer.

What have been some of your most difficult moments? Do any moments of kindness stick out to you?

Difficult things happen, but I don’t focus on them because this isn’t about me. But I do know of stories people have shared with me of their difficulties. The hardship of get housing vouchers. Being lied to about a place to live. People being being cruel or taking advantage of the homeless for no reason at all.

As far as a moment of kindness, one sticks out in my mind. I was on the street with one of my signs of encouragement. I didn’t have signs asking for money. After all, God had laid it on my heart to do so. One sign I had said, ‘Today Is Another Second Chance.’ A tourist (I believe) saw the sign. He walked up to me and blessed me with $20.00. Then he thanked me and said he needed that message. Then I knew, no matter where we are in life, we can encourage someone and show kindness and compassion.

What does helping others mean to you?

Serving, I think, has always been in my blood. My mother was a nurse. My father had a career in the military and civil service. Raising awareness is just the first step on the vision. Ultimately helping people get off the streets into permanent housing is my goal. Poverty and homelessness have become big business. There is no incentive to end homelessness, but to manage it. By manage it, I mean manage it so money can still be made from it. There are people who really want to end homelessness. My goal is to connect with those people, unite us, and make a huge difference to end homelessness as we know it in the United States.

If you could give one final message to others, what would it be?

Get to know people before you judge them. Everyone has a story. Listen with an open mind and see how you can help somebody.

I will end with a Bible passage:

Then the King will say to those on his right, ‘Come, you who are blessed by my Father; take your inheritance, the kingdom prepared for you since the creation of the world.’

Then the righteous will answer him, ‘Lord, when did we see you hungry and feed you, or thirsty and give you something to drink?’

When did we see you a stranger and invite you in, or needing clothes and clothe you?

When did we see you sick or in prison and go to visit you?

The King will reply, ‘Truly I tell you, whatever you did for one of the least of these brothers and sisters of mine, you did for me.’

‘What’s something you REALLY need?’ I heard horror stories. I wanted to help them build a BETTER life.’: Man starts nonprofit to help homeless, ‘Our goal is HOPE’

‘Will you marry me?’ The minute I said yes, we heard him. The yell of a man 100 yards away. He approached us with the biggest smile on his face.’: Couple donate annual Christmas ‘Albert box’ in honor of unforgettable homeless man

‘She was a homeless, single teen mom who aged out of foster care. She had 6 kids and was the same age as me! My heart broke.’: Single woman fosters 36 kids, adopts 2 children into ‘forever family’